A former Scotland Yard officer who mentored Usman Khan, pictured in 2010, says he raised a ‘red flag’ about his behaviour eight months before Khan murdered two at London Bridge

A former Scotland Yard officer who mentored Usman Khan following his release has claimed he raised a ‘red flag’ to the Home Office and probation service about the convicted terrorist’s behaviour eight months before his fatal London Bridge attack – but his concerns were ignored.

The mentor, who cannot be named for security reasons, says Khan, 27, seemed sincere about abandoning his extremist views and helping to deradicalise other prisoners when they first met last November, at Whitemoor prison in Cambridgeshire.

But just 11 months later, convicted terrorist Khan, who was released from prison early with a tag despite plotting to blow up the London Stock Exchange, went on a stabbing rampage at London Bridge.

On November 29, Khan attended an event at Fishmonger’s Hall organised by Learning Together, a Cambridge University programme that helps rehabilitate inmates and ex-offenders and murdered Saskia Jones, 23 and Jack Merritt, 25.

Three others were injured during the incident.

Speaking to The Sunday Times, the mentor recalled how he met Khan twice a week for two-hour sessions between December 2018 and March this year – and that during one meeting, he noticed a sudden and aggressive mood swing.

He said: ‘During the meeting, he went from being measured and calm to suddenly being enraged about something he claimed the probation services weren’t allowing him to do.’

Khan had supposedly become frustrated over the licence conditions that had been imposed on him, which included an electronic monitoring tag, curfew and supervised internet access.

The mentor added that Khan then very swiftly ‘self-corrected’ his behaviour and calmed down, leading the former Scotland Yard officer to believe he had a ‘suspiciously rehearsed’ persona.

Despite raising his concerns over Khan’s behaviour and that he still held extremist views, the mentor said no action by the Home Office or probation service was taken.

‘He should not have been released from prison,’ the officer added. ‘What the hell happened between March and November, and how the hell has nobody seen the warning signs?’

In response, the Home Office said: ‘All DDP mentors have an obligation to raise any concerns they have…with the relevant authorities who can then make an assessment about the risk posed and take action accordingly.’ 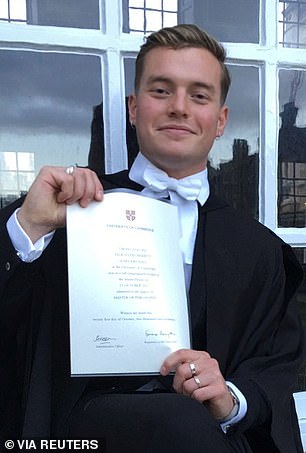 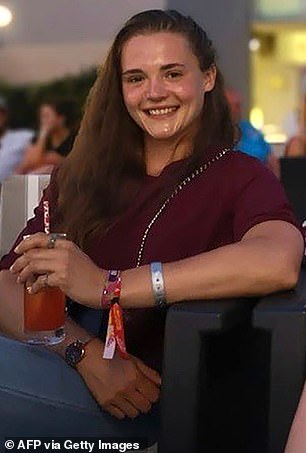 Khan’s victims, Jack Merritt, 25 and Saskia Jones, 23, were celebrated by family and friends at two separate church services this week

Rock star Nick Cave performed Into My Arms at the funeral service for Mr Merritt in Cambridge after the 25-year-old’s friends carried his wicker casket to the Smiths’ song This Charming Man.

The service for Miss Jones, 23, took place at the Holy Trinity Church in Stratford-upon-Avon, where William Shakespeare is buried.

Mr Merritt’s girlfriend Leanne O’Brien led the tributes to the Cambridge graduate at the service at St Mary’s Church, telling a congregation of hundreds: ‘He made me feel it was possible to achieve anything and everything. I’ll miss your big heart and how loved you made me feel.’

Miss Jones and Mr Merritt were attending a Cambridge University event called Learning Together, designed to help rehabilitate inmates, when they were attacked by Khan at Fishmongers’ Hall in central London. 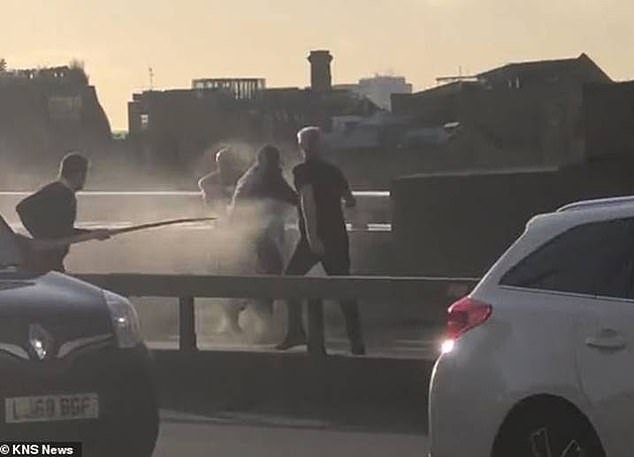 A brave civil servant who fought Khan with a narwhal tusk as the London Bridge terrorist stabbed people spoke for the first time yesterday about his selfless actions.

Darryn Frost, 38, grabbed the artefact from the wall in Fishmongers’ Hall, at the north end of the bridge, as Khan went on a killing spree on November 29 during a prisoner rehabilitation event.

Frost, a South African who works in the Ministry of Justice communications department and has lived in Britain for 14 years, was filmed fighting Khan, who was running at people with knives taped to his writes. His identity was not known until yesterday.

He said he grabbed the tusk from the wall and used it against Khan as another man kept the terrorist at bay with a wooden chair.

‘When we heard the noise from the floor below, a few of us rushed to the scene,’ said the 38-year-old. 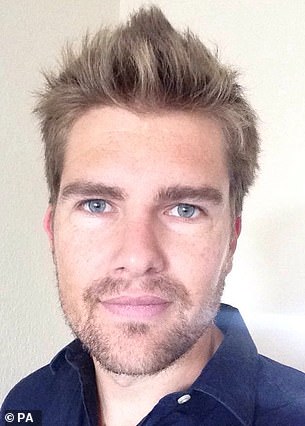 Darryn Frost, 38, above, is the hero who fought Usman Khan with a narwhal tusk as the London Bridge terrorist stabbed people

‘I took a narwhal tusk from the wall and used it to defend myself and others from the attacker. Another man was holding the attacker at bay with a wooden chair.

‘I ran down the stairs, stood next to the man with the chair, and the two of us confronted the attacker.’

He added: ‘He had knives in both hands and, upon seeing me with the narwhal tusk, pointed at his midriff he turned and spoke to me, then indicated he had an explosive device around his waist.

‘At this point, the man next to me threw his chair at the attacker, who then started running towards him with knives raised above his head.’

Frost passed the tusk to his unarmed comrade before racing back upstairs to find another to use.

When he returned, he found the first tusk ‘shattered across the floor’ and saw people fleeing the building.

He said: ‘Along with others, I pursued the attacker, tusk in hand, on to the bridge. We called out to warn the public of the danger and, after a struggle, managed to restrain him to the ground.’

Mr Frost added: ‘At that point I was trying to isolate the blades by holding his wrists so that he could not hurt anyone or set off the device.’

Footage from the attack shows Mr Frost pinning Khan to the ground before he was pulled away by a police officer and the terrorist shot dead seconds later.

Merritt’s father, David, took to Twitter on Saturday expressing his ‘pride’ at meeting Frost for the first time.

He said:  ‘I was proud to meet Darryn at my son’s funeral yesterday and to thank him for his bravery on the day. He helped to save lives. A very impressive man.’ 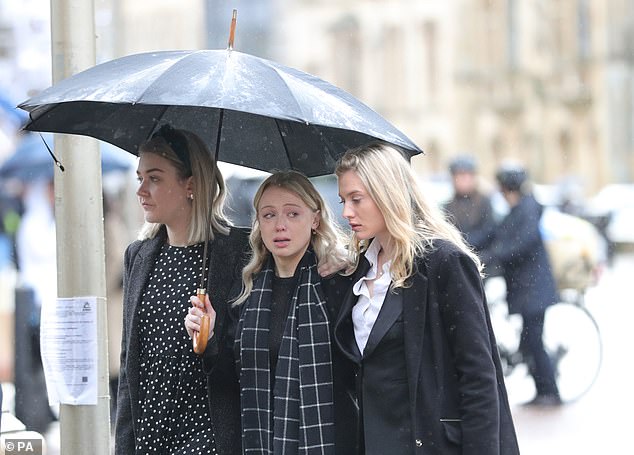 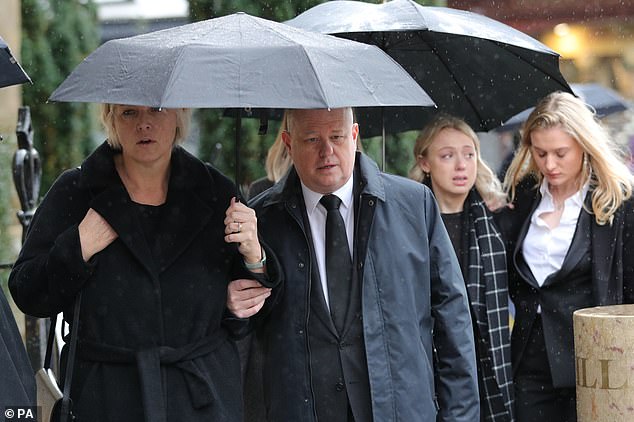