Latest News
Home /Fight Christmas! Mothers clash in Hamleys and have to be separated by security guards

Fight Christmas! Furious mothers clash in Hamleys and are separated by security guards as they scramble to get their hands on toys for their children

This is the moment angry parents clashed in Hamleys as tempers boiled over in front of young children during Christmas shopping.

Families looking to get some last minute festive gifts raged at each other in a fight over the lift in the iconic toy shop.

One parent can be heard screaming ‘f*** you’ at another as horrified young children looked on. 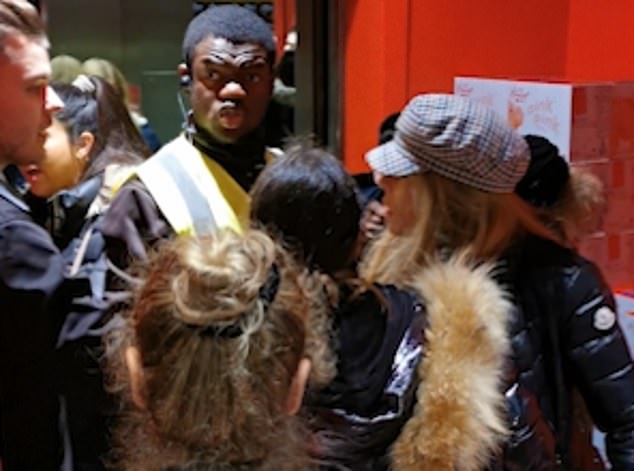 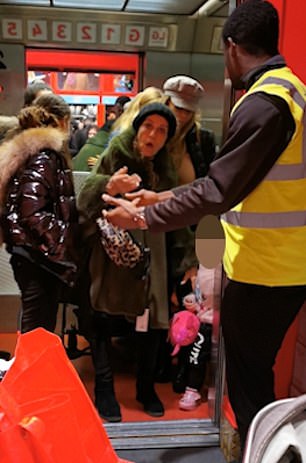 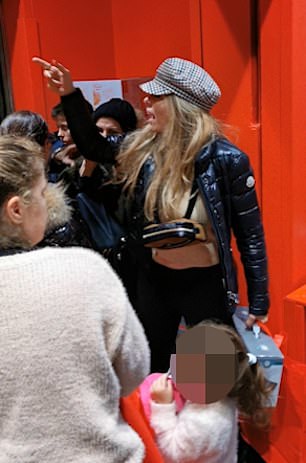 Pictured: Shoppers scream at one another in Hamleys after a row over a lift at the toy store

Security guards at the world-famous toy store had to separate the fuming shoppers before it got even more ugly.

The scrap happened at the Hamleys flagship store in Regents Street, London on Friday afternoon.

The 259-year-old toy emporium was teeming with shoppers just days before Christmas, desperate to get some last minute gifts for their children.

Families with prams and bags were queuing to use the lift to get into the seven-floor store, full of thousands of different games and toys.

The brawl was sparked when a family reportedly cut the queue.

A group standing in a lift gestures for another woman to join them and chaos erupts. Families begin jostling and screaming abuse at one another.

One woman yells ‘f**k you’ repeatedly in front of horrified young children.

The festive spirit went out the window, and furious parents turned Scrooge.

Security guards had to step in to stop the brawl boiling over.

Bystanders caught up in the incident were forced leave the store without purchasing their Christmas presents. One can be heard saying: ‘Let’s go, it’s not worth it.’

An eyewitness said: ‘The fight took place because the women on the right refused to join the queue like everyone else.

‘Instead when the lift doors opened they just pushed their way in from the exit walkway.

‘Obviously the people in the queue were not happy and the girl in the lift who was on the left side told them they had to get out. It all kicked off. I stopped filming when it got nasty.’

Fortunately the Hamleys security team managed to get things under control, and police did not have to be called. 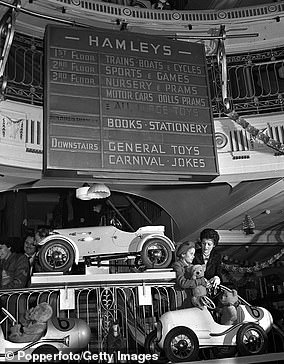 The world famous toy store began more than 250 years ago in the heart of London.

William Hamley, who grew up in Bodmin, Cornwall, opened a ‘Noah’s Ark’ toy shop crammed with everything from rag dolls to tin soldiers in 1760.

By 1837 during Queen Victoria’s reign, Hamleys had already become a London landmark. Now owned by William’s grandsons, it was said to attract families, nobility, and royalty of the day.

And in 1881 Hamleys opened a new branch in Regent Street that had five extra floors of toys.

‘We can only imagine the spectacle as toy theatres, puppets, pedal cars and miniature railway trains jostled for space in the largest toy shop in the world,’ said the company on its website.

However, in the late 1920s the business took a sharp downturn and was forced to close in 1931 due to money trouble. However, that wasn’t the end.

That same year, however, it was purchased and re-opened by Walter Lines, Chairman of the  Tri-Ang company which also made toys.

By 1938 the company had even been rewarded with a Royal Warrant from Queen Mary, authorising the company to display the royal arms. (Queen Elizabeth II also gave one to the toy shop in 1955).

The shop was bombed five times in World War II, but never shut its doors. Staff used to serve customers at the entrance, rushing inside to grab the toys they wanted to buy wearing tin hats.

Continued success meant the shop outgrew its home and moved to 188 – 196 Regent Street, where it is still open today.

Since then, the business has also gone global with stores in Dubai and Denmark among other countries.