Notre Dame ‘has only 50 per cent chance of being entirely saved’, rector says as fire-ravaged cathedral misses Christmas mass for first time since the French Revolution

The rector of Notre Dame Cathedral says the Paris landmark is still so fragile that there is a ’50 per cent chance’ the structure might not be entirely saved.

Scaffolding installed before April’s disastrous fire is threatening the vaults of the Gothic monument, according to Patrick Chauvet.

Restoration work is not likely to begin until 2021 and the church last night went without a Christmas celebration for the first time since the French Revolution.

Speaking at the replacement venue at the Saint-German l’Auxerrois Church last night, Chauvet said the church ‘is not out of danger’. 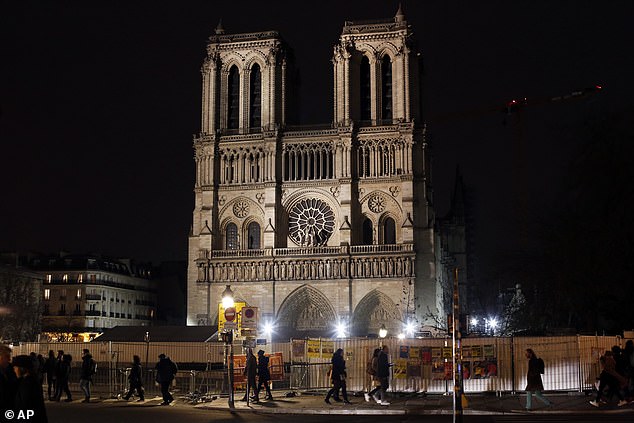 Empty: Notre Dame cathedral in Paris, pictured last night, is still so fragile that there is a ’50 per cent chance’ the structure might not be entirely saved, its rector said 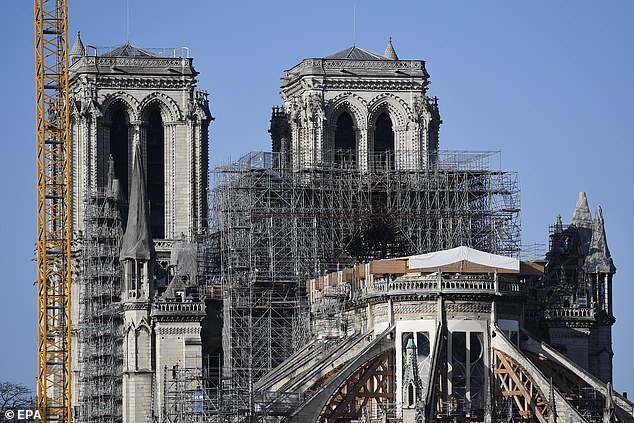 Repairs: A giant crane is set up front of Notre Dame with scaffolding all over the roof yesterday, more than eight months after the disastrous fire

‘Today we can say that there is maybe a 50 per cent chance that it will be saved,’ Chauvet said on the sidelines of a midnight Mass.

‘There is also 50% chance of scaffolding falling onto the three vaults, so as you can see the building is still very fragile.

‘We need to remove completely the scaffolding in order to make the building safe so in 2021 we will probably start the restoration of the cathedral.

‘Once the scaffolding is removed we need to assess the state of the cathedral, the quantity of stones to be removed and replaced.’

Chauvet estimated it would take another three years after that to make it safe enough for people to re-enter the cathedral, but that the full restoration will take longer.

President Emmanuel Macron has said he wants it rebuilt by 2024, when Paris hosts the Olympics, but experts have questioned whether that time frame is realistic. 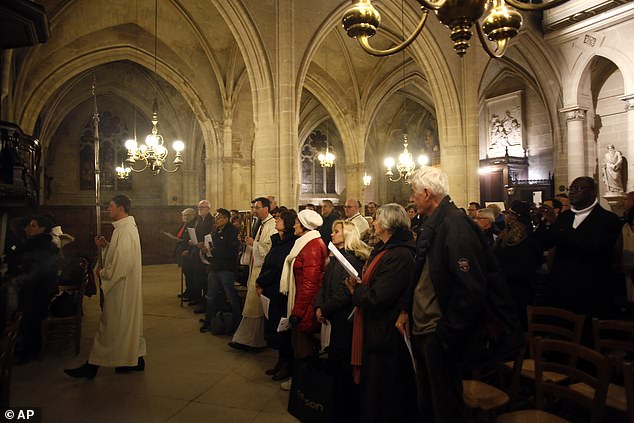 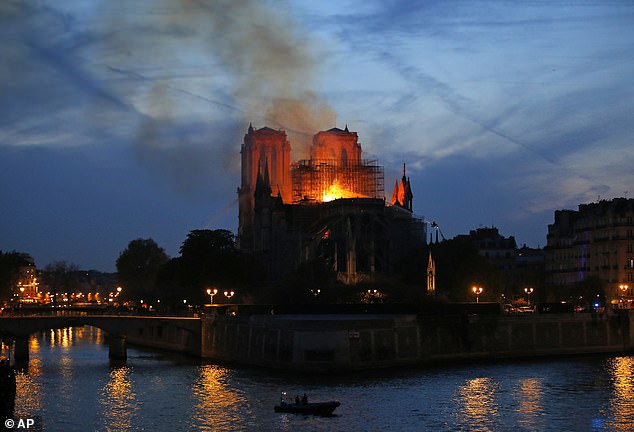 Disaster: The blaze on April 15 ripped through the roof, destroyed the 19th-century spire and nearly brought down the emblematic bell towers

Unable to celebrate Christmas in Notre Dame this year, its congregation, clergy and choir decamped to the church across from the Louvre Museum instead, leaving Notre Dame empty at Christmas for the first time since 1803.

Parishioners at Christmas Eve Mass shared sorrow about the fire, but also a feeling of solidarity.

‘I remember my mother told me that she was watching TV, and that there was a fire at Notre Dame,’ aid Jean-Luc Bodam, a Parisian engineer.

I told her `it’s not possible,’ and I took my bike, and when I arrived I was crying,’ said Bodam, who used to cross town to attend services at the cathedral.

‘We are French, we are going to try to rebuild Notre Dame as it was before, because it is a symbol,’ he said.

The cause of the fire has not yet been clearly established, although prosecutors say there is no evidence of arson.

The blaze ripped through the roof, destroyed the 19th-century spire and nearly brought down the emblematic bell towers before firefighters brought it under control.