At the end of what she called a ‘bumpy’ year, in which the kingdom has arguably been less united than at any point in her reign, the Queen used yesterday’s Christmas message to make a simple request.

And she made it several times over: could we all, please, let bygones be bygones.

There was no mention of this year’s political upheavals, of course. But she spoke explicitly about the need to settle disagreements and move on.

The wartime generation had managed it, she said, as powerful images were broadcast of this year’s 75th anniversary of D-Day.

‘Sworn enemies came together in friendly commemorations,’ she went on, ‘putting past differences behind them.’ 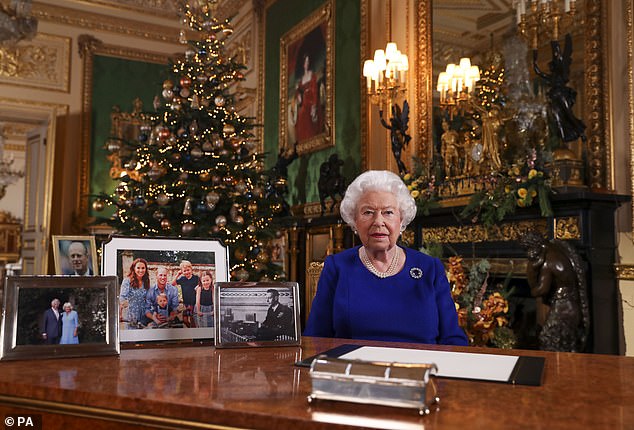 At the end of what she called a ‘bumpy’ year, in which the kingdom has arguably been less united than at any point in her reign, the Queen used yesterday’s Christmas message to make a simple request, writes ROBERT HARDMAN

Noting all the efforts towards reconciliation since the war, she employed the phrase again: ‘By being willing to put past differences behind us and move forward together, we honour the freedom and democracy once won for us at so great a cost.’

Christ, said the Queen, had shown the world how to ‘overcome long-held differences and deep-seated divisions’.

And, for the benefit of those who had still not got the message – or only just switched on the telly – she ended on the same thought: Christmas was ‘a timely reminder of what positive things can be achieved when people set aside past differences and come together’.

The best way to achieve this, she explained repeatedly, was through ‘small steps’ – a phrase she had borrowed from the first man on the Moon. Recalling that this year is the 50th anniversary of Nasa’s Apollo 11 mission, she spoke of being ‘transfixed’ watching Neil Armstrong ‘taking a small step for man and a giant leap for mankind’.

And therein lay an important lesson: ‘It’s a reminder for us all that giant leaps often start with small steps.’ When it comes to rebuilding trust, ‘progress often comes through small steps’.

The birth of Jesus had been ‘a seemingly small and insignificant step’ but Jesus himself had shown how ‘small steps taken in faith’ lead to ‘harmony and understanding’.

The Queen added: ‘It is often the small steps, not the giant leaps, that bring about the most lasting change.’ 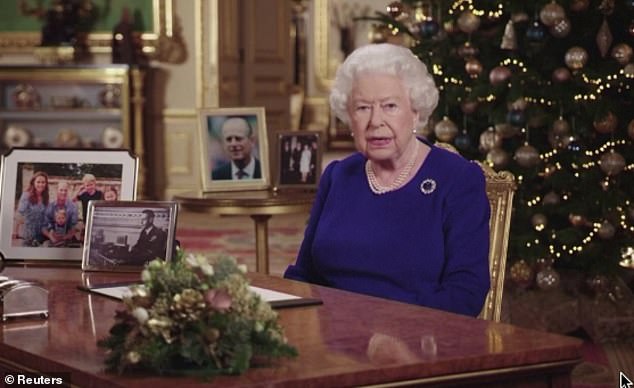 There was no mention of this year’s political upheavals, of course. But the Queen spoke explicitly about the need to settle disagreements and move on, writes ROBERT HARDMAN

Here was a strong echo of her Christmas broadcast three years ago when she quoted the words of Mother (now Saint) Teresa of Calcutta who believed that ‘small things’ change the world. ‘On our own, we cannot end wars,’ the Queen said in 2016, ‘but the cumulative impact of thousands of small acts of goodness can be bigger than we imagine.’ Few people might associate Neil Armstrong with Mother Teresa but both have clearly had the same inspirational effect on the Queen (who met them both). 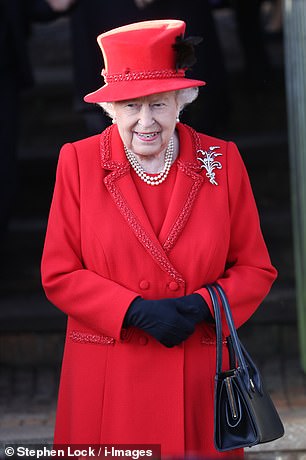 Christ, said the Queen, had shown the world how to ‘overcome long-held differences and deep-seated divisions’. Pictured: The Queen in Sandringham today

However, it was her direct reference to 2019 that will be chiefly remembered by royal historians and commentators: ‘The path, of course, is not always smooth, and may at times this year have felt quite bumpy, but small steps can make a world of difference.’

It has clearly been a bumpy ride for the monarchy as well as for the nation. A year that began and ended with dramas involving the Duke of Edinburgh (a January car crash and a December helicopter flight to hospital) saw the Crown also unwittingly drawn in to an unlawful prorogation of Parliament.

On top of all that, the unhappiness of the Duke and Duchess of Sussex with their royal role has, time and again, become headline news while the Duke of York’s BBC Newsnight interview has now, effectively, ostracised him from public life – including yesterday’s family stroll to Sandringham Church.

Yet, if the Sussexes were absent from Sandringham (they are spending this Christmas on the Duchess’s home patch in North America), they were much in the Queen’s thoughts as she linked the arrival of baby Archie to another royal landmark.

‘Two hundred years on from the birth of my great great grandmother, Queen Victoria, Prince Philip and I have been delighted to welcome our eighth great-grandchild into our family,’ she said, accompanied by a picture of her joyfully meeting the new seventh-in-line to the throne.

For all the setbacks, there was still an upbeat tone to this broadcast, culminating in the sight of the monarch and the next three monarchs-in-waiting – the Prince of Wales, the Duke of Cambridge and Prince George – all ‘helping’ with the making of Christmas puddings for the Royal British Legion. 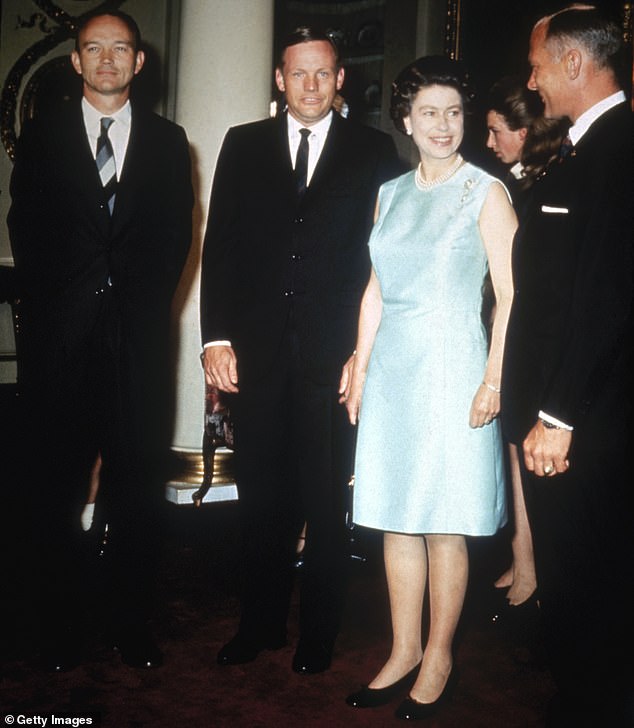 Recalling that this year is the 50th anniversary of Nasa’s Apollo 11 mission, she spoke of being ‘transfixed’ watching Neil Armstrong ‘taking a small step for man and a giant leap for mankind’, writes ROBERT HARDMAN

At one point, six-year-old Prince George was stirring his pudding with such gusto that the Queen beat a hasty retreat before the currants started flying. Right Royal Bake Off this was not, however. The point of the exercise was a gentle but unambiguous show of continuity. That, after all, is the monarchy’s one-word mission statement.

Hence the photograph in pride of place on the Queen’s desk – that of her father, King George VI. The Queen recalled his anxieties in 1944 as the war hung in the balance. ‘He knew the secret D-Day plans but could, of course, share that burden with no one,’ she said.

Fast forward to 2019 and there was the King’s daughter happily welcoming German Chancellor Angela Merkel to the 75th commemorations of D-Day with those wonderful veterans in Portsmouth. Then came shots of Prince Charles and his elder son going about their duties with the Armed Forces. And so the baton passes from one generation to the next.

The Queen was also careful to adjust her message to modern sensitivities. Man landing on the Moon was not just ‘a giant leap for mankind’ but for ‘womankind’, too. After a year of upscaled eco-activism, the Queen acknowledged the strength of feeling.

If her own generation had spent their youth fighting one sort of conflict, she was ‘struck by how new generations have brought a similar sense of purpose to issues such as protecting our environment’.

Brexiteers and Remainers will have been eagerly searching for any hint of royal inclinations. Her 1972 Christmas broadcast, on the eve of our entry in to Europe, was full of references to the Common Market.

This one made no mention whatsoever. However, the Queen pointedly included another multi-national organisation – Nato. There were several scenes from this month’s Buckingham Palace reception to mark the 70th anniversary of the alliance. 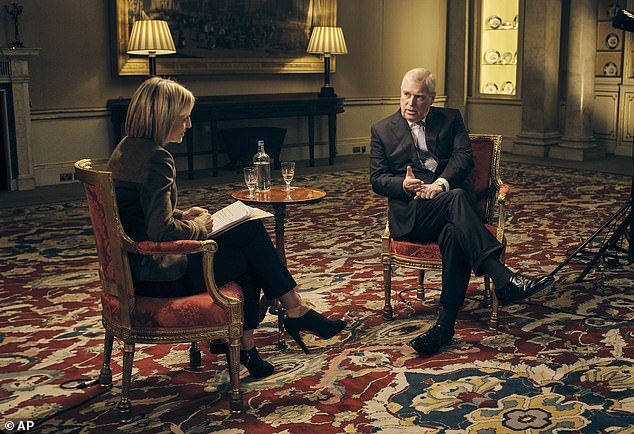 Here, once again, up popped Angela Merkel. One moment, she was kissing France’s president Macron. Then there she was again, chatting to the Queen. Indeed, the German Chancellor enjoyed considerably more facetime in this film than the brief glimpses we caught of either Boris Johnson or Theresa May. That’s reconciliation for you.

There were plenty of other milestones that the Queen could have highlighted, too.

As well as Neil Armstrong’s heroics, the hectic summer of 1969 included the investiture of the Prince of Wales at Caernarfon Castle. There was no reference to that yesterday. Nor did the Queen allude to another landmark of ’69.

Just days before Apollo 11, the British public had sat glued to their screens watching something that drew an even bigger television audience than man landing on the Moon: the very first royal documentary, ‘Royal Family’.

Back then, the public was transfixed watching the Queen making salad dressing. Yesterday, it was Christmas pudding. Such is life in the continuity business.

Meanwhile, over on Channel 4, there was an ‘alternative’ Christmas message by the former Speaker of the Commons, John Bercow, who warned of a nation in the ‘vice-like grip’ of populism.

‘Politics shouldn’t be about decibel levels,’ said the man whose histrionics have been his trademark. His best friend, he said, was a Brexiteer while he himself had been a Remainer.

‘He thinks I’m wrong. I know he is,’ joked Mr Bercow. In essence, his message was much the same as the Queen’s – just without the charm, gravitas or depth: can we all be a bit nicer to each other?

Then he rounded it off leading a group of schoolchildren in a chorus of ‘Orrr-derrr!’ That new career in panto cannot come soon enough.