Brussels hinted today that it could demand its own Brextension next year after the top EU bureaucrat questioned whether a trade deal could be done by next December.

Boris Johnson is set to enshrine in British law the end of the transition period in a year’s time, insisting a basic free commerce agreement can be in place.

But European Commission chief Ursula von der Leyen has expressed ‘serious concern’ over whether 11 months after January’s completion of Brexit is long enough.

It comes as both sides limber up for what could be brutal negotiations over free trade that will be the main focus of the UK’s foreign policy in 2020.

‘I am very worried given the little time we have,’ Ms von der Leyen told France’s Les Echos newspaper in an interview published today.

‘It’s not only about negotiating a free trade deal but many other subjects. It seems to me that on both sides we must ask ourselves seriously if all these negotiations are feasible in such a short time.

‘I believe that it would be reasonable to review things in the middle of the year, if necessary to see if an extension is needed.’ 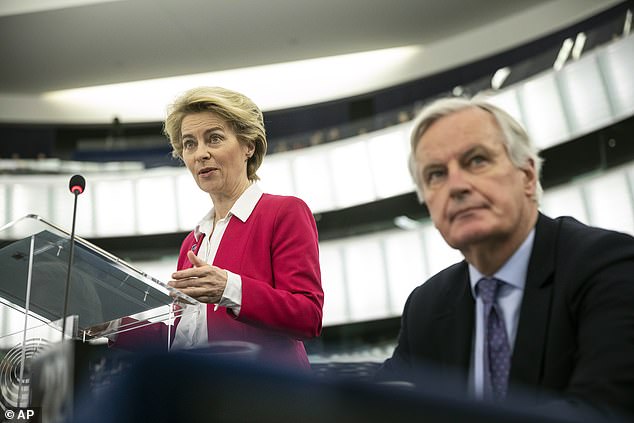 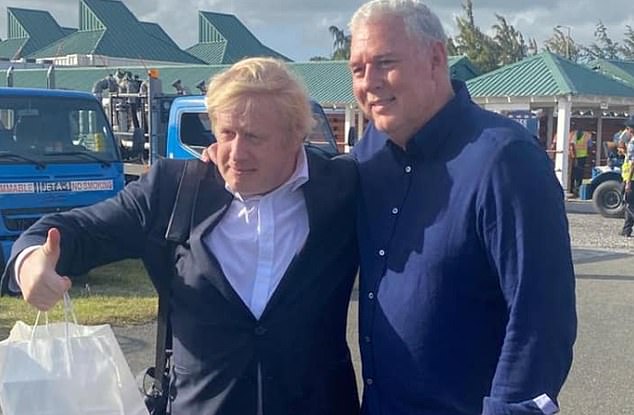 Boris Johnson (pictured in St Lucia today) is set to enshrine in British law the end of the transition period in a year’s time, insisting a basic free commerce agreement can be in place.

Under the withdrawal agreement which Prime Minister Boris Johnson has agreed with Europe but not yet pushed through parliament, the UK could ask for a one or two year extension.

But that has to be requested by July 1 this year.

Any extension period would see the UK continue to obey EU trade and other rules until they are over-written by a new deal, something likely to prove explosively unpopular to Brexiteers.

The EU wants an agreement on the wider EU/UK future relationship completed alongside the trade deal.

Mr Johnson won a comfortable 80-seat majority in the election this month, and insists he will not ask for more time and is preparing legislation to forbid such a move.

In this case, negotiators will only have 11 months to conclude a trade agreement, a task that officials on both sides have warned is extremely ambitious.

German chancellor Angela Merkel cautioned after Mr Johnson’s election win that concluding a deal on the UK’s future relationship with the European Union would be ‘very complicated.’

And if 2020 comes to an end with no deal concluded, Britain will sever ties with the huge EU single market with no follow-on deal to protect jobs and trade on both sides.

EU’s chief Brexit negotiator Michel Barnier said earlier this week that drafting and ratifying a post-Brexit deal by next year was an ‘immense challenge but we will give it our all’.

It came as Brussels prepares to target the UK’s strength as a financial centre after Brexit.

The EU will threaten City firms with a lack of access to continental markets unless it agrees to maintain ‘equivalence’ – a level playing field for rules and regulations.

British commerce could also lose access to important data flows under plans being prepared by the bloc.

With Brexit expected to happen smoothly on January 31, the following 11 month are expected to see frenetic activity to establish at least an outline trade deal by December 2020.

Early February: The European Commission is expected to publish its draft mandate for the UK/EU trade negotiations

March: Trade negotiations due to begin.

March 26/27: EU summit to discuss the early progress of the talks

June 18: EU summit to decide whether an agreement can be reached by December 31 or if an extension is required.

July 1: Deadline for a decision on whether to extend the transition period past December 31 by this point

December 31: The transition period ends. If there is no trade deal with the EU in place the UK does business under World Trade Organisation rules until one is agreed.

But Boris Johnson has already signalled that he intends for the UK to diverge in many areas from EU standards and systems as it seeks a business advantage over the continent.

‘These are both big levers for the EU,’ an EU source told the Times.

‘Data adequacy and equivalence are decisions under our direct control, decisions that can be reversed at any time and that will be linked to progress in the wider negotiations.’

If the two sides cannot hammer out an agreement they can both live with by the end of December next year the UK would leave the transition period – a post Brexit buffer zone – without a trade deal in place.

This would mean firms would do international business under World Trade Organiation (WTO) rules until a deal can be agreed.

The Brussels plans seen by the Times suggest that it would allow UK finance firms access to European markets as long as they continue to adhere to EU regulations and standards of practice.

But it would be allowed to block that access with just 30 days notice if the situation changed.

These could be political changes sparked by law changes introduced in Westminster designed to give UK firms a better chance of thriving on the world stage.

It is also said to be considering an ‘adequacy’ block on personal data across the channel, which could impact service sector companies and potentially security co-operation.

Mr Johnson last week put the UK on the path to a showdown with Brussels after he refused to be shackled to the bloc’s rules in the future.

After the Prime Minister’s withdrawal deal sailed through the Commons he told MPs that the ‘oven was on’ when it came to delivering Brexit next year.