This is the horrifying moment a jealous thug doused a young woman’s Mercedes in petrol before sending it up in flames.

Ambreen Farooq, 19, who owns the now scorched A180 model, believes the Christmas Eve arson attack was plotted by a vindictive workplace bully.

She claimed the torching was the climax of a vendetta by a bitter colleague, who she also alleged scratched the car with a key weeks earlier.

Dramatic CCTV footage from the property Windermere Road, Reading, shows the hooded yob tip-toeing up to the vehicle at 2am on December 24 clutching a can of fuel.

Under the cover of darkness he approaches the vehicle which he soaks in petrol before drizzling a trail from the driveway out into the road which he then ignites.

A huge burst of blinding light erupts as the Mercedes is set alight and consumed by the fire while the arsonist sprints from the driveway in flip-flops. 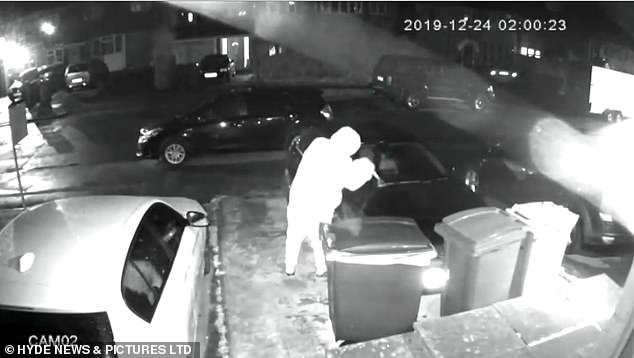 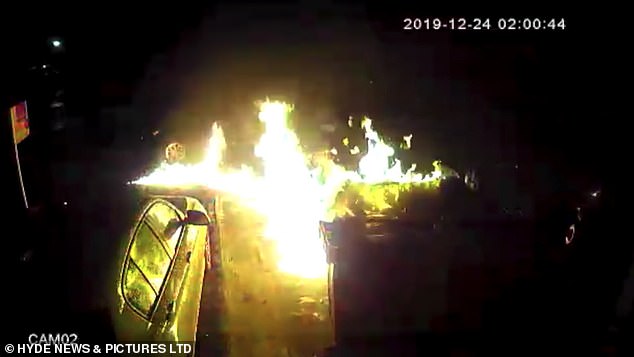 Some 10 minutes later, firefighters wearing breathing apparatus scrambled to the scene and battled the blaze.

The car was destroyed and one of Ms Farooq’s neighbour’s vehicles was also damaged.

Ms Farooq said that a few weeks earlier, a woman had been caught on CCTV scratching the paintwork of the Mercedes with a key – leading the teenager to think the arson attack was an escalation of this previous hit.

She revealed how she was recently forced of of her job with a water company by a bitterly jealous colleague.

She said: ‘The jealousy and bullying started when I began working. The woman used to write indirect tweets about my parents buying me things but throughout 2018 it wasn’t too bad.

‘She had a lot of problems with a lot of people, it wasn’t just me so at first I thought the tweets were about somebody else.

‘When I went on holiday it was blatant the tweets were about me, I recently got back from Dubai and she posted something very direct about my holiday. 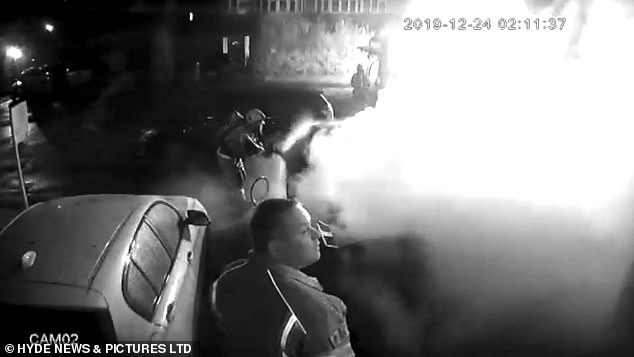 Some 10 minutes later, firefighters wearing breathing apparatus scrambled to the scene and battled back the roaring blaze

‘Over the last two months, the online bullying got so bad that I retaliated, which resulted in the car being keyed on December 15.

‘I messaged her to say I knew it had something to do with her but said I would drop it the accusation going into the new year.

‘However, she’s kept up the same regime, being rude and defensive. When the car got burned on Tuesday I didn’t message her but I am sure it has all connected.

‘The police have not been able to find out who the arsonist was and neither have I. But I am sure it is all to do with the jealousy.’

‘The family she comes from is a broken family, I don’t know why she would attack someone like this just over being jealous.’

Father-of-four Mohammed Farooq explained how his youngest daughter aged nine years was too afraid to go back home after the attack and had been living away with family since Christmas Eve. 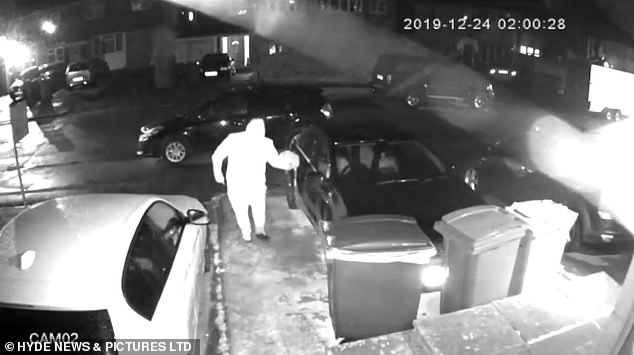 Ambreen Farooq, 19, who owns the now scorched A180 model, believes the Christmas Eve arson attack was plotted by a vindictive workplace bully

‘When my wife saw the flames out the window she started shouting to get everybody out.

‘We couldn’t go out the front door because the flames were too high so we had to go out the back door.

‘My little daughter, she was very scared. She is too frightened to come home. She said to me “dad you don’t know how far these people will go. They have nothing to lose”.’

‘I wanted to keep working hard and get nice things but that annoyed them, even if you ignore them they still come after you. She has taken away what I had.’