A migrant campaign group has branded the Home Office ‘disgraceful’ for vowing to send illegal immigrants back to mainland Europe.

The Iranian, Iraqi and Afghan citizens – including one child – were then brought into the Port of Dover.

French authorities rescued a further 14 people who set off with the other 49 but got into trouble off the waters of Boulogne-sur-Mer.

The Home Office responded to the incident by saying that illegal migration is a ‘criminal activity’ and illegal immigrants would be sent back to mainland Europe.

But a charity that works with asylum seekers has slammed the government’s response, describing it as ‘disgraceful.’

Kent Refugee Action Network’s Bridget Chapman, said the government’s ‘very tough talk’ did not ‘take account of international law,’ citing the UN’s 1951 Refugee Convention, which states that ‘refugees should not be penalised for their illegal entry’. 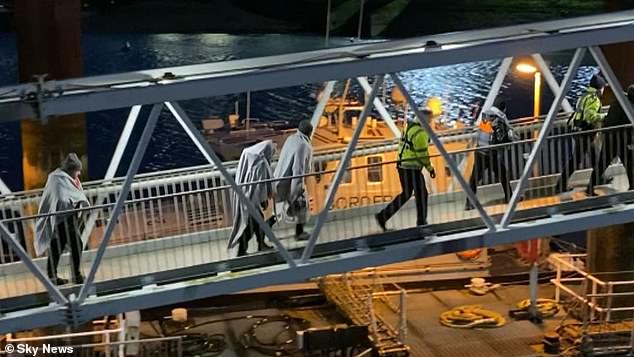 In the early hours of Boxing Day, UK Border Force officers detained the migrants and brought them into the Port of Dover (pictured arriving)

She added: ‘There is no such thing as an illegal asylum seeker.’

Ms Chapman said it was an ‘extremely irresponsible statement,’ which ‘appears to be politically motivated and designed to whip up ill feeling towards desperate people’.

‘I would remind the Home Office that Jesus was a refugee,’ she added. ‘Would they have turned him away?’

When the authorities were alerted to a possible breach of the border at 1.30am, they dispatched a HM Coastguard helicopter, a fixed-wing spotter airplane, two Border Force ships and the Dover lifeboat. 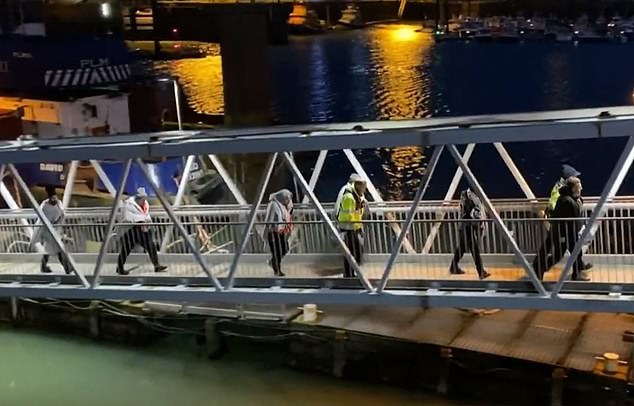 The treacherous overnight Channel crossing would have been bitterly cold, and the mostly male migrants were seen walking up the gangway wrapped in thermal survival blankets

More than 1,700 people have crossed the Channel in small boats this year. In October Home Secretary Priti Patel vowed that illegal migrant crossings of the Channel will be halved by the end of the month.

Last month, at least 129 migrants made it into the UK by making the life-risking trip across the Dover Strait, one of the world’s busiest shipping lanes.

Speaking of today’s crossings, a Sky News reporter said: ‘Many of them had life jackets on, which were taken off by those officials when they got to the top of that gangway and put in a pile to one side, and they were led to [a] shipping container where they were given hot drinks and blankets.’

HM Coastguard said it had been coordinating the response to a ‘number of incidents’ off the Kent coast.

A Home Office spokesperson said: ‘Illegal migration is a criminal activity. Those who seek to come to the UK illegally and the ruthless criminals who facilitate journeys are all breaking the law and endangering lives.

‘When people arrive on our shores unlawfully, we will work to return them to mainland Europe.’

The migrant crisis erupted last November, with hundreds arriving in the final two months of 2018.

It prompted then-Home Secretary Sajid Javid to declare a ‘major incident’, calling in extra Border Force cutters and the Government spending millions of pounds to tackle the issue. 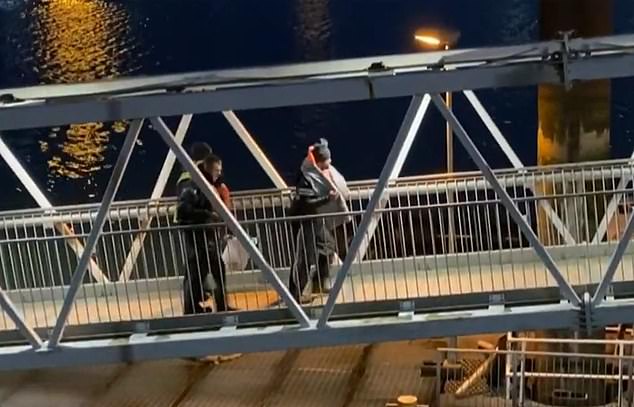 The migrants had been given lifejackets by Border Force and were given hot drinks on their detainment, Sky News reported

But the problem has worsened throughout 2019, and Home Secretary Priti Patel revealed in October she had agreed an ‘action plan’ with France.

She said patrols across the French coast had been doubled to stop people smugglers, and the Home Office had already funded drones to scour France’s beaches – but the crossings have continued.

Mrs Elphicke said: ‘The people traffickers operate their illegal trade everyday of the year, including over the entire festive period from Christmas Day to New Year.

‘The UK and the French authorities should be equally ready. In particular the French should be take (sic) firm action to stop these small craft setting off from the French coast.

‘The weather was very mild on Christmas Day. These were perfect conditions for illegal departures from France. The French ought to have been more vigilant.’

‘Border force, the RNLI and HM Coastguard work tirelessly to save lives. But the truth is there should be an agreement between Britain and France that people who are found in the English Channel should be safely returned to France and not brought into Britain.

‘That would be the best deterrent and the most effective way to bring this crisis to an end.’