A gunman has killed one person and critically injured another inside a packed Texas church during a livestreamed service before he was shot dead by an armed member of the congregation.

MedStar Mobile Healthcare spokeswoman Macara Trusty said two people were fatally shot at the West Freeway Church of Christ in White Settlement, which is about 8 miles west of Fort Worth.

Trusty said she was told by a supervisor at the scene that one of the people who died was the shooter.

A third person is in critical condition and is being treated at a hospital. All of the victims are male, she said.

Two more people were treated for minor injuries at the scene, Trusty said. They have since been treated and released. 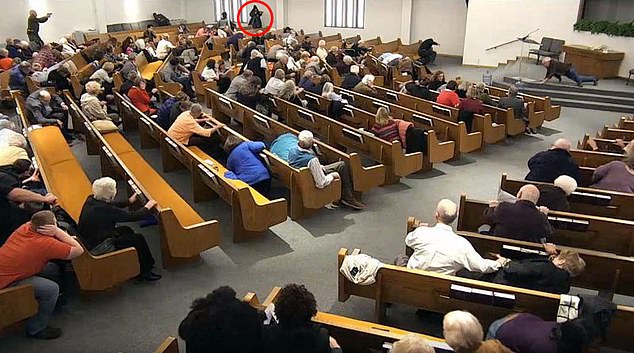 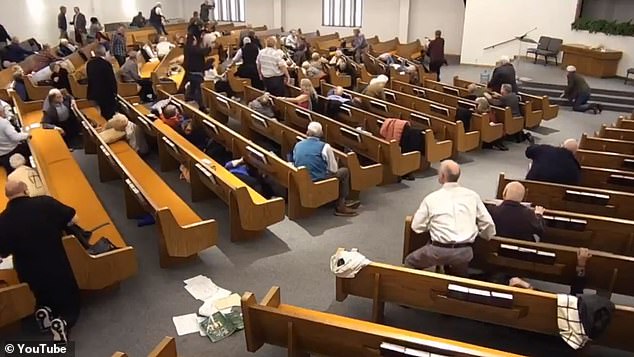 While the shots were being fired, people ducked under church pews as a church leader tries to calm people down 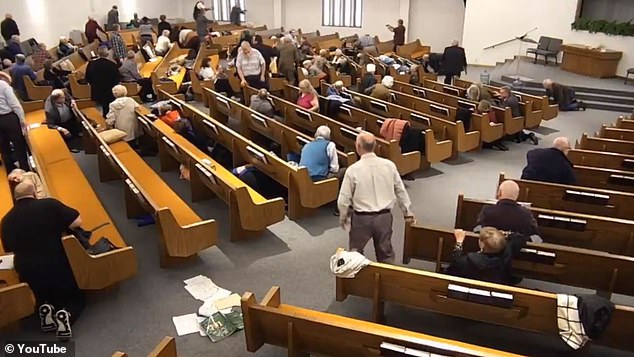 In the video, at least five men from the congregation were seen rushing towards the shooter with handguns

The shooting was reported Sunday morning during the 10am service at the church. The service was being live-streamed at the time of the shooting.

Authorities have not released any details about what led to the shooting.

An elder at the church told the New York Times that one of those killed was a security guard who responded to the shooter, calling him a dear friend.

‘He was trying to do what he needed to do to protect the rest of us,’ said elder, Mike Tinius.

‘It’s extremely upsetting to see anyone committing violence,’ he added. 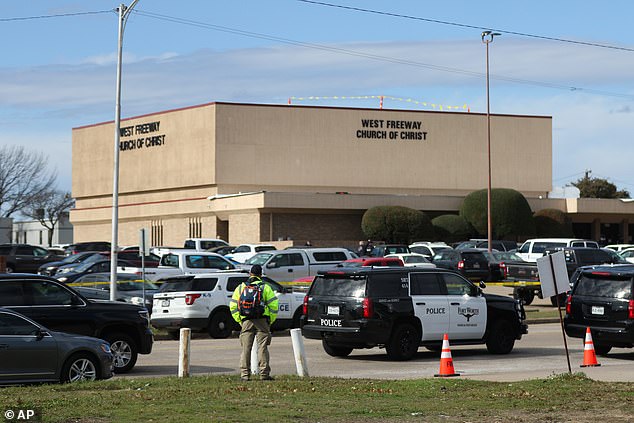 Tinius said he didn’t know the gunman and that the shooting appeared to be random.

A witness told CBS 11 that the armed man walked up to a server during the communion and opened fire.

‘You feel like your life is flashing before you. I was so worried about my little one,’ witness Isabel Arreola said.

Video of the livestream shows a person wearing a large coat, with the hood covering his head, standing up and walking over toward another man at the back of the room.

The shooter appears to say something to the man, prompting him to point in a direction at the back of the church.

In a matter of seconds, the shooter whips out what appears to be a shotgun and fires two rounds.

One of the shots hits a man who stood up in the back of the church and the other shot hits the man the victim had spoken too.

After the second shot was fired, the gunman attempted to flee the scene before he was shot by an armed member of the congregation. 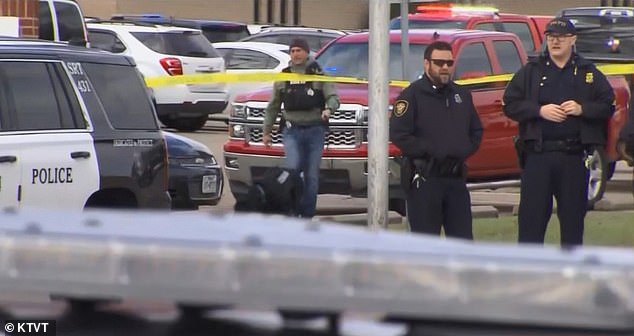 Trusty said she was told by a supervisor at the scene that one of the people who died was the shooter. A third person in critical condition and is being treated at a hospital. All of the victims are male, she said. Authorities outside the church Sunday morning 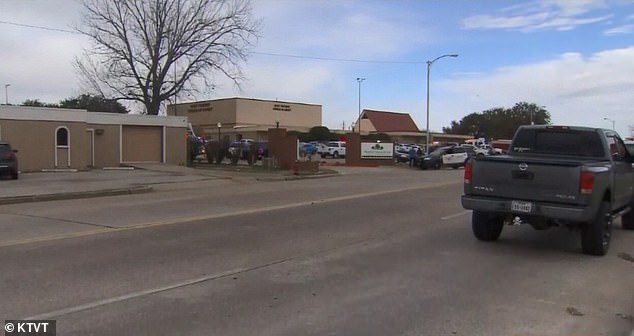 An elder at the church (pictured) said that one of those killed was a security guard who responded to the shooter, calling him a dear friend 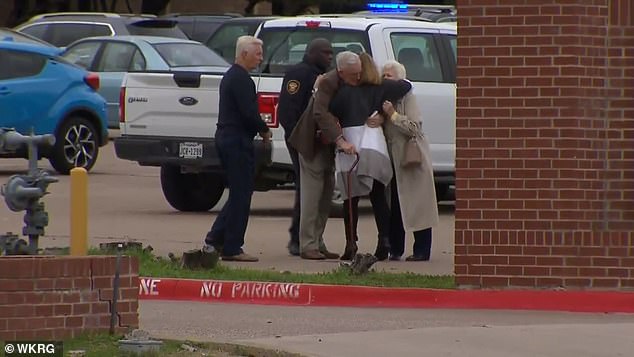 Witnesses said the shooting occurred as the communion was about to end Sunday morning. Loved ones hug one another outside the church

According to one member of the church, the gunman had spoken to one of the deacons in the back of the church before he opened fire.

The member wrote on Facebook that another deacon ‘who is a concealed carry instruction, and retired law enforcement officer, shot the guy before he could fire a third time!’

That deacon has not been identified but according to CBS 11, he is actually a former FBI agent and part of the church’s security.

While the shots were being fired, people ducked under church pews and at least five others rushed towards the shooter with handguns.

A church leader then tries to calm people down, while members of the congregation scream, cry and run towards the exits.

In a statement, Texas Governor Greg Abbott said: ‘Our hearts go out to the victims and families of those killed in the evil act of violence that occurred at the West Freeway Church of Christ.

‘Places of worship are meant to be sacred and I am grateful for the church member who acted quickly to take down the shooter and help prevent further loss of life.’

Texas Attorney General Ken Paxton said he was ‘shocked and saddened’ to hear about the shooting.

‘As reports come in, please pray for any victims and their families, this congregation, and the law enforcement officials at the scene. My office will assist in any way needed,’ he added.

White Settlement police have not responded to requests for comment. An investigation is ongoing.

It is not the first deadly shooting to take place at a church in Texas.

In November 2017, Devin Patrick Kelley opened fire on the congregation at a church in Sutherland Springs, Texas, killing more than two dozen worshippers, before taking his own life.