Labour is demanding another delay to the Brexit process if a trade deal is not secured by the end of June.

Jeremy Corbyn has tabled an amendment to the EU Withdrawal Bill that would extend the transition period until 2023 in the absence of a comprehensive agreement.

Boris Johnson has pledged that the UK will formally leave the bloc on January 31, and his thumping Commons majority following the election should guarantee he can make good on the vow.

But he has also ruled out any lengthening of the implementation phase – essentially a ‘standstill’ where the country is still bound by Brussels rules – beyond this year.

If passed, Labour’s change would force the government to add two extra years to the transition to avoid departing on basic WTO terms.

However, the amendment is doomed to failure given the Tories‘ dominant position in Parliament, and could raise alarm on Labour benches that the party will yet again be seen as blocking Brexit. 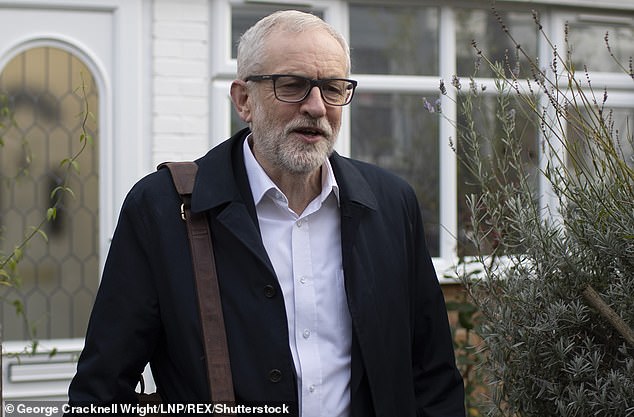 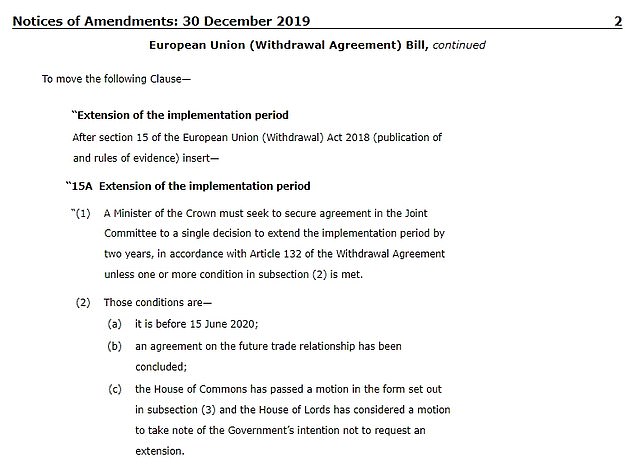 If passed, Labour’s change would force the government to add two extra years to the transition to avoid departing on basic WTO term

Mr Corbyn’s muddled EU stance has been seen as one of the main reasons why Labour’s ‘Red Wall’ of Leave-leaning northern seats crumbled on December 12, handing Mr Johnson victory.

An explanatory statement on Labour’s amendment reads: ‘This new clause would restore the role for Parliament in deciding whether to extend transition to avoid a WTO (World Trade Organisation) Brexit.’

Mr Johnson has insisted he believes a trade deal with the EU can be agreed before the transition period expires.

But critics fear the 11-month timetable is too tight and could lead to Brexit without a UK-EU trade deal in place.

Labour’s amendment, tabled in the name of its outgoing leader, states: ‘A minister of the Crown must seek to secure agreement in the joint committee to a single decision to extend the implementation period by two years, in accordance with Article 132 of the Withdrawal Agreement unless one or more condition in subsection (2) is met.

‘Those conditions are: (a) it is before 15 June 2020; (b) an agreement on the future trade relationship has been concluded; (c) the House of Commons has passed a motion in the form set out in subsection (3) and the House of Lords has considered a motion to take note of the Government’s intention not to request an extension.’

It adds a minister must move a motion in the Commons for a shorter extension to the implementation period if EU representatives on the joint committee dealing with Brexit indicate they would agree to such an arrangement rather than a two-year extension.

The ratification of a trade agreement would also enable the UK to seek to end any extended transition period early, the amendment states.

The only other way to dodge the law would be for the Commons and Lords to pass a motion approving the UK’s departure on WTO terms.

The amendment has been tabled to the European Union (Withdrawal Agreement) Bill along with a series of other proposals from opposition parties.

But they are all unlikely to make progress given Mr Johnson’s 80-seat majority.

This enabled the Bill to cruise through second reading before Christmas by 358 votes to 234, majority 124, and the PM has repeatedly insisted all his MPs have pledged to support his Brexit deal and get it agreed by January 31.

Other amendments tabled by Labour include a bid to protect the right for unaccompanied child refugees to be reunited with their family after Brexit. 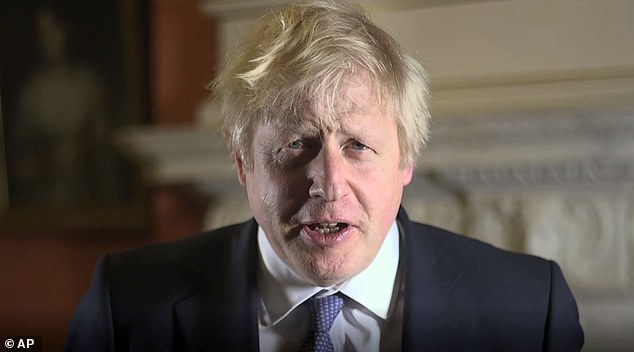 Boris Johnson (pictured delivering his New Year message) has pledged that the UK will formally leave the bloc on January 31, and his thumping Commons majority following the election should guarantee he can make good on the vow

The revised wording of the Bill removed a Government commitment to strike a deal with the European Union so child refugees can be reunited with their family in the UK, even after free movement ends.

This led to the Government being accused of reneging on the so-called ‘Dubs amendment’ allowing greater flexibility in such matters.

The previous terms, pushed for by Lord Alf Dubs – who fled the Nazis as a boy – had been accepted by Theresa May when she was in Number 10, but her successor Mr Johnson has been accused of watering down the commitment to simply requiring a minister to ‘make a statement’ to Parliament.

The DUP, which propped up Mrs May’s minority government under a confidence and supply agreement, has also put forward amendments protecting the access of goods.

The Bill returns to the Commons for committee stage, where these amendments could be considered, on January 7 and is expected to clear all stages in the House by January 9.

It will then proceed to the House of Lords for further scrutiny.