The deadly substance is found in the outer covering, hull, of the bean which is native to tropical east Africa around Ethiopia. 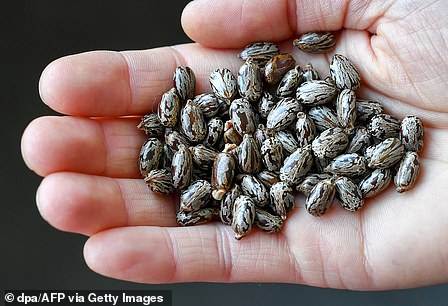 Castor beans are not dangerous on their own because they are surrounded by an indigestible capsule. Pictured: Castor seeds

If castor beans are chewed and swallowed, the released ricin can cause injury.

Castor beans are not dangerous on their own because they are surrounded by an indigestible capsule.

It can be found as a powder, mist or pellet or it can be dissolved in water or weak acid. It is very difficult to trace.

The pulp of around eight beans can kill an adult and a dose of purified rich powder, the size of a few grains of table salt, can cause death.

Ricin works by getting inside the body’s cells and preventing them from making the proteins they need – and without them, cells die.

Eventually this is harmful to the whole body and can cause death. But the effects of ricin poisoning depend on whether it was inhaled, ingested or injected.

It can take up to a day after exposure for symptoms to show up but it can kill you within three days.

When inhaled, symptoms include difficulty in breathing, fever, cough, nausea, sweating and tightness in the chest. Death occurs after blood pressure plummets and breathing stops. 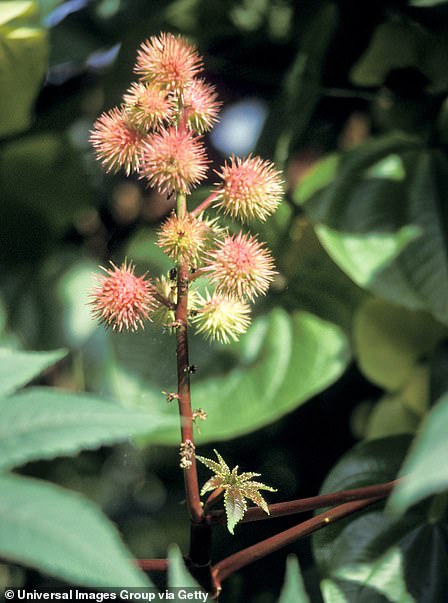 Ricin works by getting inside the body’s cells and preventing them from making the proteins they need – and without them, cells die. Pictured: Castor bean

There is no known antidote but treatment includes use of respirators, fluids, flushing the stomach and treating low blood pressure.

Cold War dissident Georgi Markov was assassinated on the streets of London in 1978 by a Bulgarian secret service agent, who used an umbrella that fired a pellet of ricin into his leg.

The Wood Green ricin plot of 2002 was an alleged bio terrorism plot to attack the London Underground with the deadly substance.

The Biological Weapon Identification Group in Wiltshire identified there was no trace of ricin.

However Kamal Bourgass was sentenced to 17 years imprisonment on the basis of five pages of handwritten notes in Arabic of how to make ricin, cyanide and botulinum and a list of chemicals used in explosives.

Iraq admitted to the United Nations Special Commission that it manufactured ricin and tested it in artillery shells before the Gulf War which took place between 1990 and 1991.