A father and son who organised a ‘brazen’ attack on a jewellery shop using sledgehammers, axes, grenades and machetes have been jailed for a total of 34 years.

Elliott Burton, 49, and his son Connor, 27, both from Birmingham, joined three other masked men to carry out a 45-second robbery at Michael Jones Jeweller in Northampton before making off with £124,000 worth of watches and jewellery.

Following the violent raid, which left staff and shoppers ‘terrified’, CCTV footage released by Northamptonshire Police showed the masked attackers ram their white BMW 1 series into the shop window before storming the store and threatening staff.

The father and son were found guilty by a jury at Northampton Crown Court over the raid which took place on December 14, 2018. 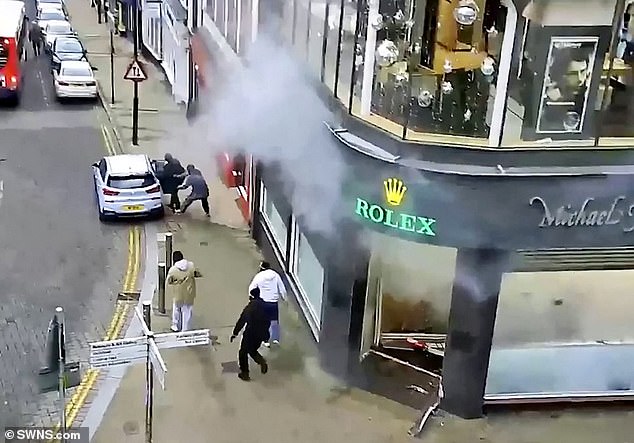 The masked men organised a ‘brazen’ attack at Michael Jones Jeweller in Northampton on December 14, 2018 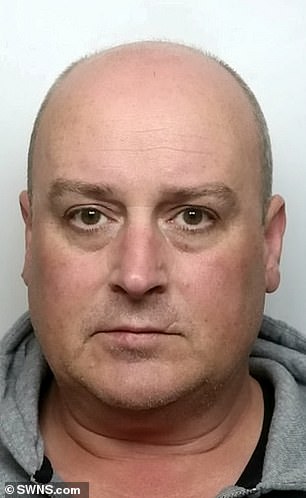 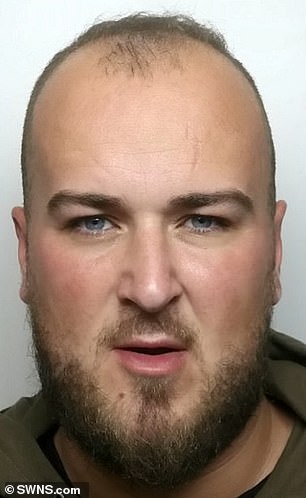 Father Elliot Burton (left), 49, was found guilty of conspiring to commit robbery and jailed for 20 years while son Connor Burton (right), 27, was sentenced to 14 years in prison

Jailing them on Tuesday His Honour Judge Michael Fowler said: ‘The planning was professional.

‘Michael Jones Jewellers were attacked without any for the safety of anyone in the store.

‘Staff and shoppers were not only terrified but injured both physically and psychologically.

‘You injured them physically and psychologically and you have fought the matter at every stage, showing no remorse for your actions.

‘It cannot be said for certain either of you were involved physically in the robbery.

‘But you were at the very least part of a gang of robbers who did your bidding.’

During the footage, one gang member was seen smashing the BMW 1 series into the front window of the jewellery store as four of the five attackers stormed into the shop.

A smoke grenade was hurled into the shop to disorient terrified staff members while another thug stood outside threatened onlookers with a machete. 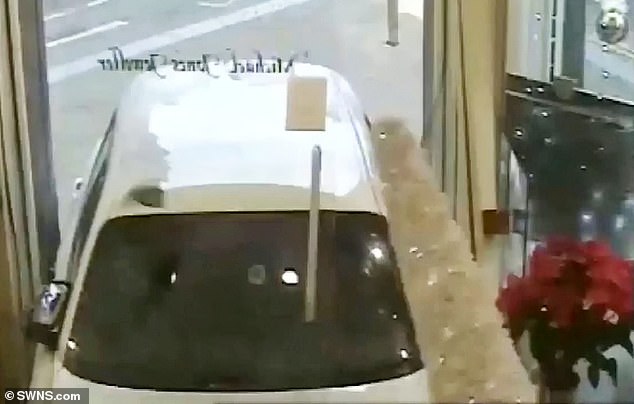 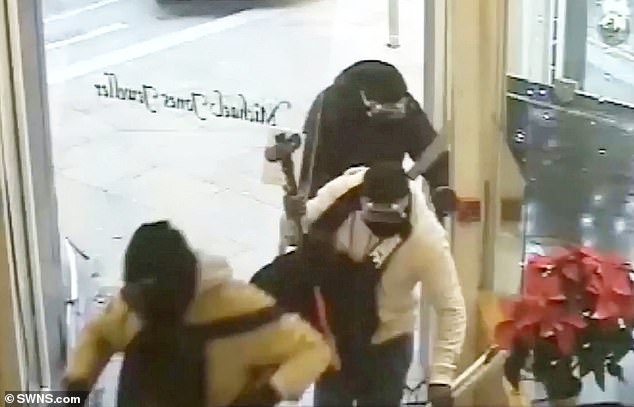 Four of the five men entered the store with sledgehammers, axes and machetes and threatened staff 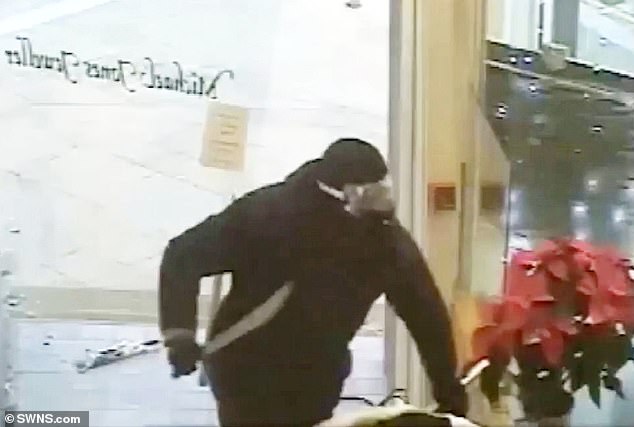 The other members of the gang used baseball bats, hammers and axes to smash display cases to steal £124,000 worth of Rolex watches and diamond jewellery.

Footage then caught the men speeding down the pavement in a blue Hyundai getaway car after the road was blocked by a bus.

Several members of the public were forced to dive out of the way before the car swerved back onto the road.

The robbers then dumped the car nearby before transferring to a stolen Range Rover which they drove to Buckingham University where they climbed into a third getaway car. 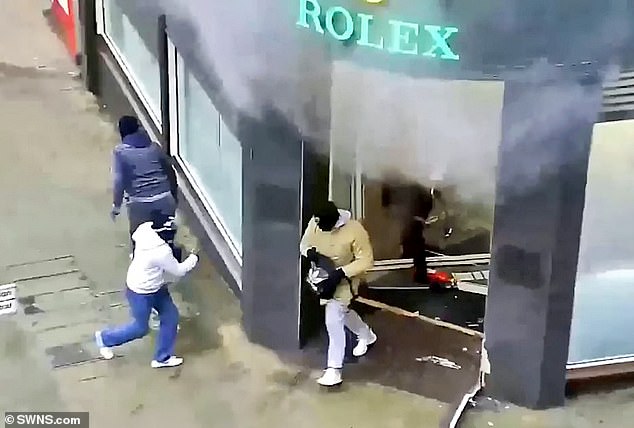 The gang used a smoke grenade to disorient terrified staff members before making off with £124,000 worth of Rolex watches and diamond jewellery 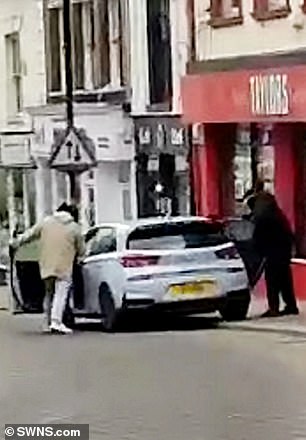 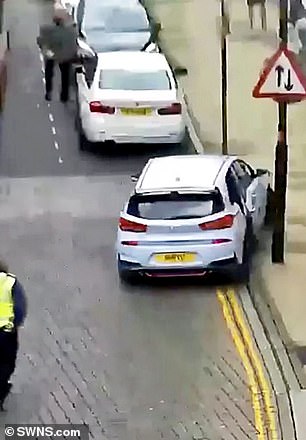 Elliott Burton, of Kings Heath, Birmingham, was found guilty of conspiring to commit robbery and was jailed yesterday for 20 years after a three-week trial at Northampton Crown Court.

His son Connor, also of Birmingham, was found guilty of the same charge and was sentenced to 14 years in prison.

The pair were also found guilty of conspiring to rob another jewellers in Wood Street, Swindon, Wiltshire.

The men were sentenced to a further ten and seven years respectively which will run concurrently.

Addressing Burton Snr directly the judge added: ‘You have an appalling record of offending and I am satisfied that you took a leading role in these offences.’

The court heard the gang had plotted to carry out an identical raid on a jewellers in Swindon the month before the Michael Jones raid but were foiled when a police officer found one of their getaway cars. 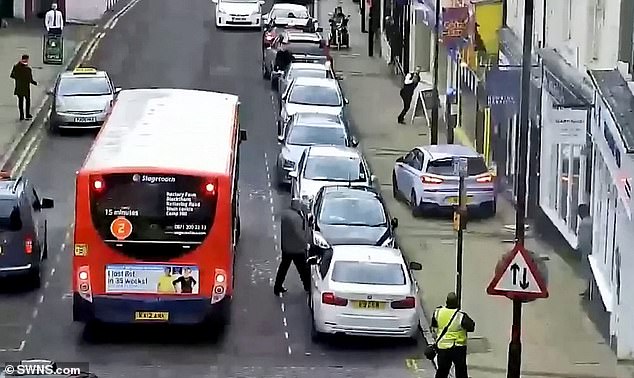 Detective Sergeant Alex Lowe, of Northamptonshire Police, said the Burtons were ‘at the top’ of organised crime gangs in the county.

He said: ‘I welcome the lengthy sentences handed out to Elliot Burton and his son Connor.

‘This incident was exceptionally distressing for the staff members and customers inside the shop that day – many of whom still suffer from anxiety because of the incident.

‘I hope the conclusion of this matter today will provide them with a sense of justice and allow them to move forward.

‘This was a very long and complex investigation, made harder by the frankly ridiculous defences the Burtons tried to come up with during the course of the trial – all of which we were able to disprove.

‘I hope these sentences send a clear message to anyone looking to travel to Northamptonshire to commit a crime – we will not tolerate it and you will be caught. 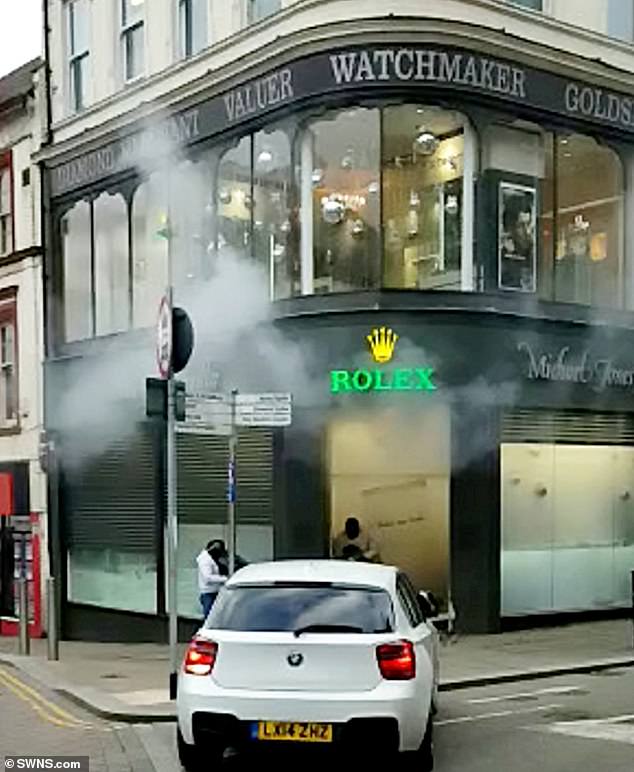 Following the violent robbery, the Burtons were jailed for a total of 34 years while the police continue to hunt for the other members of the gang

‘The Burtons have demonstrated that they are at the top of the organised crime groups in Northamptonshire.’

Detective Constable Dave Scarth said: ‘It was a very brazen attack and absolutely terrifying for the staff and the customers at Michael Jones at the time.

Describing the gang’s getaway, Detective Constable Dave Scarth added: ‘The getaway was incredibly reckless in that they drove down the pavement of Bridge Street.

‘From CCTV you can see people diving out of the way of the car. It was only a matter of luck that nobody was injured.’

Police are still hunting the other members of the gang who are still on the run.