Harry and Meghan have quit as senior royals and revealed they will live between the UK and North America while working to become financially independent.

The Duke and Duchess of Sussex made their announcement in a statement on their official Instagram this evening. They wrote: ‘After many months of reflection and internal discussions, we have chosen to make a transition this year in starting to carve out a progressive new role within this institution.

‘We intend to step back as ‘senior’ members of the Royal Family and work to become financially independent, while continuing to fully support Her Majesty The Queen. It is with your encouragement, particularly over the last few years, that we feel prepared to make this adjustment.

‘We now plan to balance our time between the United Kingdom and North America, continuing to honour our duty to The Queen, the Commonwealth, and our patronages. 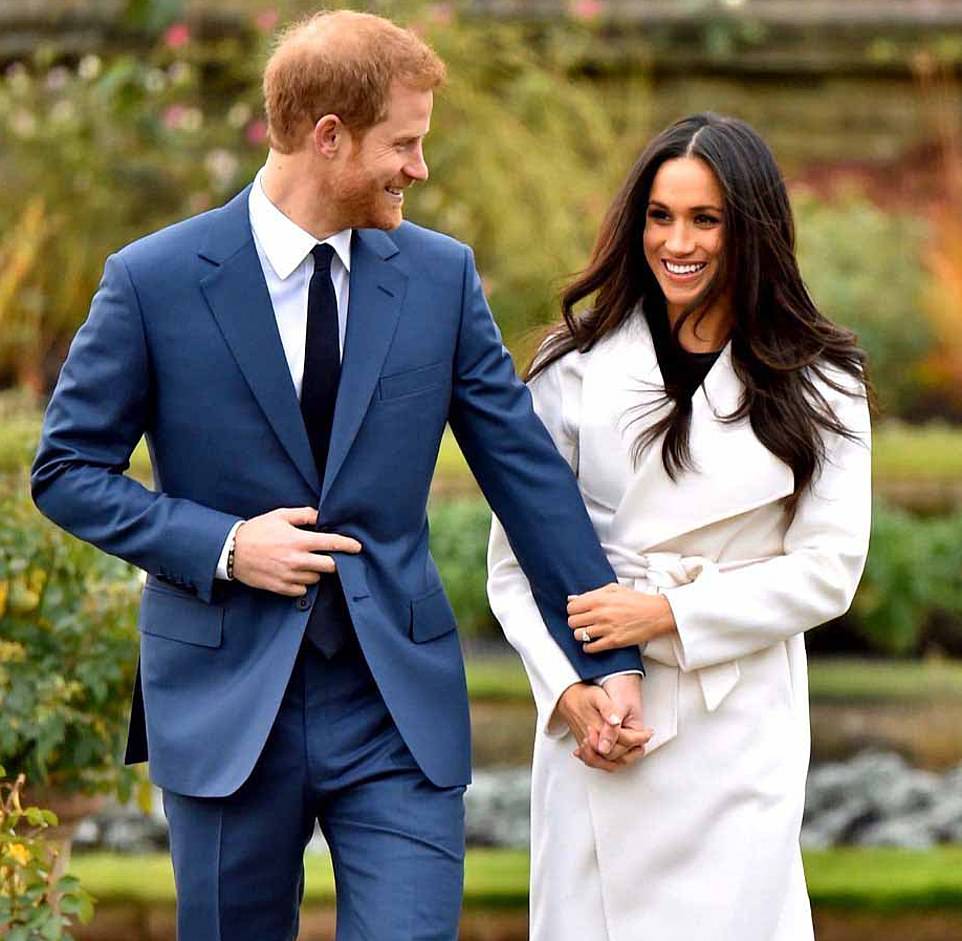 ‘This geographic balance will enable us to raise our son with an appreciation for the royal tradition into which he was born, while also providing our family with the space to focus on the next chapter, including the launch of our new charitable entity.

‘We look forward to sharing the full details of this exciting next step in due course, as we continue to collaborate with Her Majesty The Queen, The Prince of Wales, The Duke of Cambridge and all relevant parties. Until then, please accept our deepest thanks for your continued support.’

Good Morning Britain presenter Piers Morgan slammed Meghan as he blamed her for splitting up the Royal Family, writing on Twitter: ‘People say I’m too critical of Meghan Markle – but she ditched her family, ditched her Dad, ditched most of her old friends, split Harry from William and has now split him from the Royal Family. I rest my case.’

The couple’s move follows weeks of speculation about their future after they took an extended break from royal duties over the festive period that followed an emotional appearance in a documentary.

In the ITV programme they spoke about the pressures they have been facing and family rifts, and in a separate move Harry issued a damning statement against the media accusing sections of the press of bullying his wife. 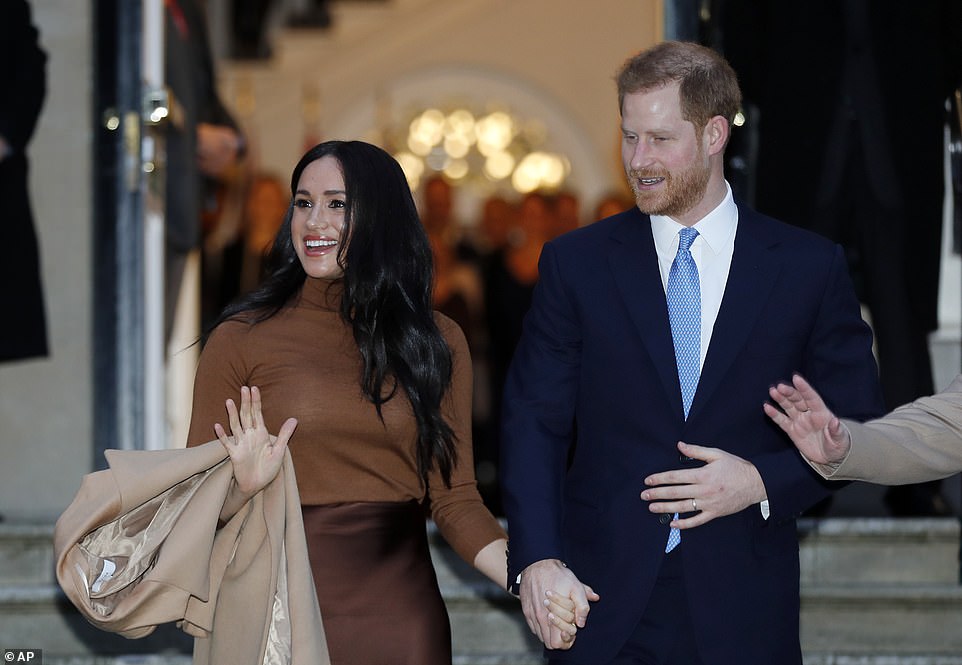 The Duke and Duchess (pictured, yesterday at Canada House in London) were said to be looking at making the move across the Atlantic where they would be based for a significant part of the year. Rumours abounded before they confirmed this evening that they would be splitting their time between the UK and North America 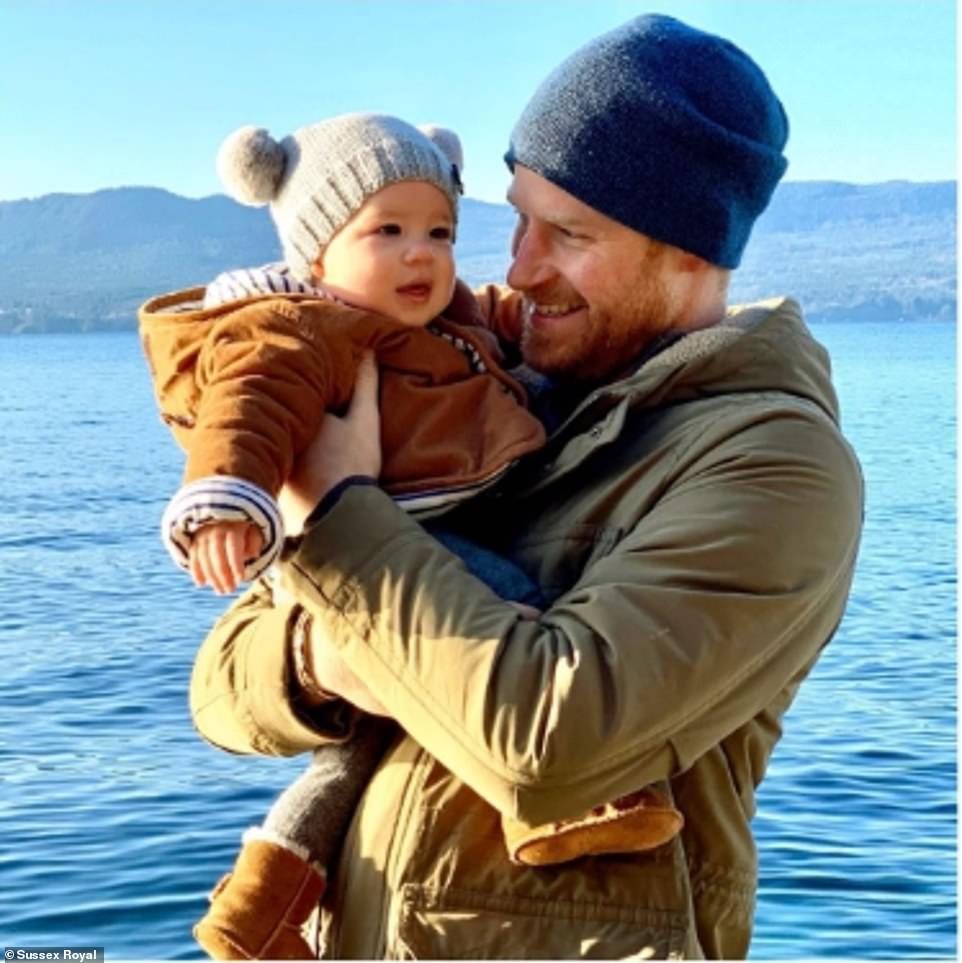 The family spent Christmas in Canada and Harry posed for a picture with his little boy Archie, who the couple have said they will raise with a respect for the tradition into which he was born

This evening’s announcement came after Harry and Meghan‘s rumoured relocation to Canada has today sparked fresh speculation that they could be about to withdraw from public life.

The Duke and Duchess were said to be looking at making the move across the Atlantic where they would be based for a significant part of the year, as they ‘consider their future’ and reassess their role within the royal household.

The couple recently returned from a six-week break in Canada over the festive period, where they spent their first Christmas together as a family with baby Archie at a £10.7million home in Vancouver Island.

Sources said that they will start discussing their plans with senior royals — expected to include the Queen and Prince Charles  — in the coming days, but the Palace told MailOnline that they would not comment on ‘speculation.’

The couple have significant personal wealth they could live on but it is unlikely the Queen, or his father Prince Charles, would cut off Harry and his wife if they chose to move abroad fulltime.

Her Majesty pays Harry and William jointly £5million from the £82million annual Sovereign Grant, which is funded by the taxpayer, and handed to the most senior members of the royal family.

The £5million from their grandmother the Queen is not broken down between the royal siblings – but William is believed to get slightly more so Harry and his family probably receive around £2million from the Crown.

The brothers also claim a further £3.16million a year in ‘non-official expenditure’ and is likely to be split in similar proportions.

Another source of income for Prince Harry is his annual allowance from the profits generated his father’s £1.2billion Duchy of Cornwall estate. Charles paid £4.9million to his sons from that pot last year.

Harry and Meghan also claim staffing costs, which are currently estimated at just under £1million a year.

They employ a private secretary, who can earn up to £146,000, and a nanny for Archie who would also command a six-figure salary. London ‘super nannies’ who work for the capital’s richest and most powerful families earn an average of £104,000, according to industry sources.

At Frogmore Cottage they have a housekeeper – but no chef because Meghan loves cooking – two personal assistants and two palace orderlies probably earning between £20,000 and £30,000 each.