No mountain too high, no activity too ludicrous. Whether it’s posing on a perilous clifftop or in front of a grumpy bear, there seem to be no lengths to which the selfie generation won’t go in pursuit of the perfect image to share on social media.

But, as the death of a young British model in Australia this week illustrates, the pursuit of the ultimate selfie can give an unbearably tragic twist to the expression ‘killer shot’.

Blonde model and make-up artist Madalyn Davis, from Lincoln, documented her travels to her 14,000 Instagram followers. The 21-year-old set off from the UK in October and had been in Thailand and Bali before arriving in Australia.

‘Can’t believe I’ve been travelling for a whole month now,’ she wrote in November. ‘Not looked back at my old life once (miss my job though) and I am super-excited for my future abroad.’

But on Sunday, those hopes and dreams came to an end after a late-night party and a dawn walk to the cliffs in Sydney ended with Madalyn plunging 100 ft to her death from a ‘selfie hotspot’. 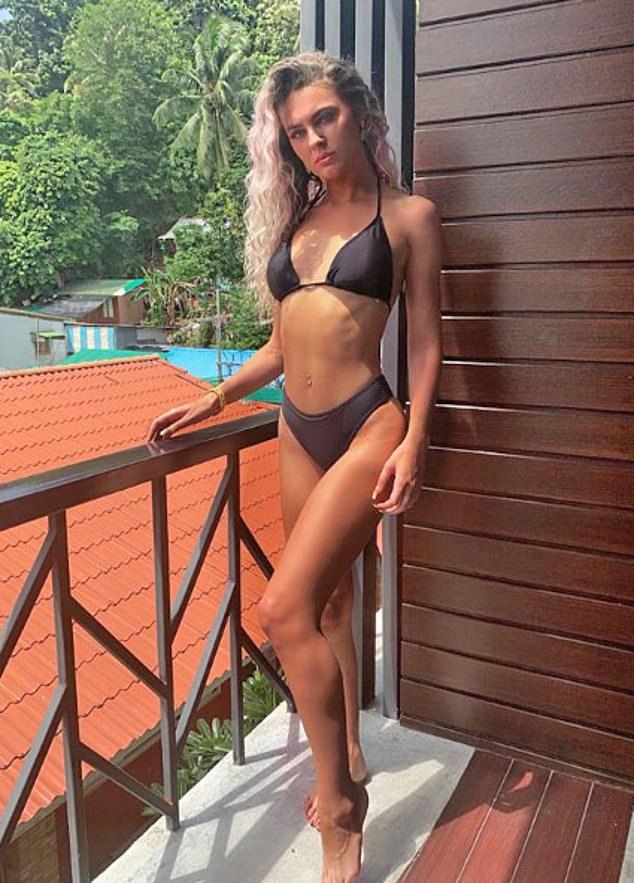 British backpacker and model Madalyn Davis, 21 (pictured above) fell to her death from a notorious Australian cliff-top selfie spot at Diamond Bay Reserve in Sydney 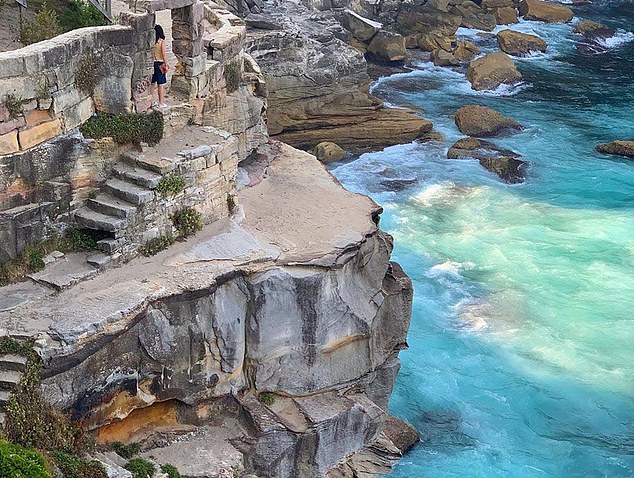 Diamond Bay is a popular location for selfies, with numerous photos tagged #diamondbay on Instagram snapped from the cliff edge

Quite what happened remains to be determined, but initial reports suggested Maddy, as she was known, had been sitting at the cliff edge to have her picture taken.

And then she wasn’t there any more. That sunrise jaunt had become the poignant last stop on a young woman’s global adventure.

Last year, local councillors said they would crack down on visitors risking their lives at the Diamond Bay Reserve, after a 27-year-old woman fell and died just weeks after residents had warned it was ‘only a matter of time’ before there was a tragedy.

A fence was erected, but locals said tourists had been seen climbing over it to photograph themselves closer to the dramatic backdrop.

Should it transpire that taking selfies was the reason for Maddy’s death, it would hardly be the first such incident.

In 2018, a global study by researchers at the U.S. National Library of Medicine found that the quest for the perfect selfie had been responsible for the deaths of 259 people between 2011 and 2017.

As the researchers were limited to scouring reports to compile their figures, it is quite possible the true figure is far higher.

Indeed, so frequent have such untimely deaths become that the phrases ‘death by selfie’ and ‘killfie’ (a selfie taken in a risky or astonishing position at a dangerous location) have entered common parlance.

In the UK, the phenomenon first came to many people’s attention with the death in June 2017 of South Korean student Hyewon Kim. The 23-year-old, who had come to Britain to improve her English, suffered catastrophic head injuries when she asked a stranger to take a picture of her against the backdrop of the Seven Sisters cliffs, in East Sussex. 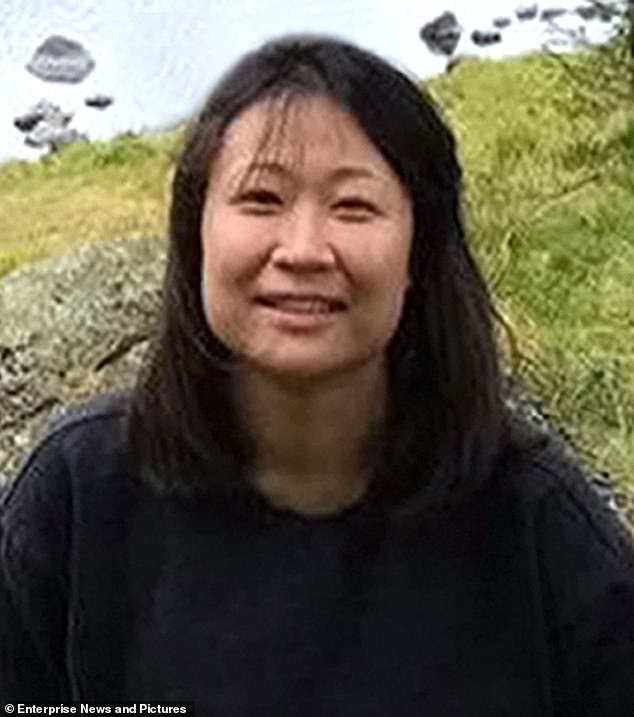 South Korean student Hyewon Kim (pictured above), 23, fell 200 feet to her death from an East Sussex clifftop after jumping in the air for a photograph 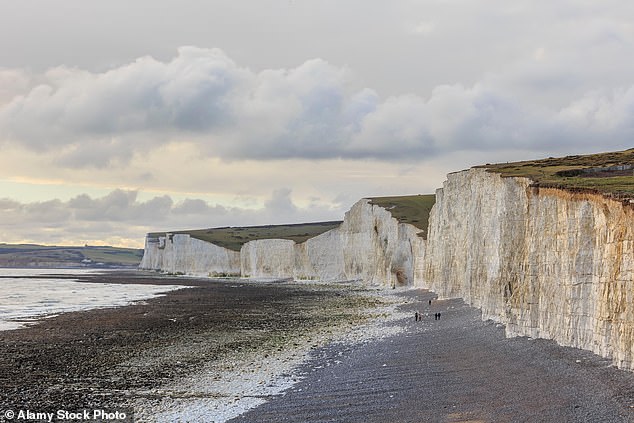 The famous landscape around Seven Sister, Seaford (pictured above) where Hyewon fell from

She did what countless others had done before her and jumped in the air for a photograph — but lost her footing as she landed and toppled over the edge.

When police looked at her mobile phone, which was found lying at the top of the beauty spot, there were six photos that showed her jumping in the air ‘extremely close’ to the edge.

‘Her concentration is not on anything other than what she is doing. The expression on her face shows nothing but enjoyment,’ Detective Sergeant Tod Stewart told the inquest into the student’s death.

This followed an incident on New Year’s Eve 2016, when a 17-year-old boy from Aldershot, in Hampshire, became the victim of a tragedy that may have been related to taking a selfie on the Paris Metro. 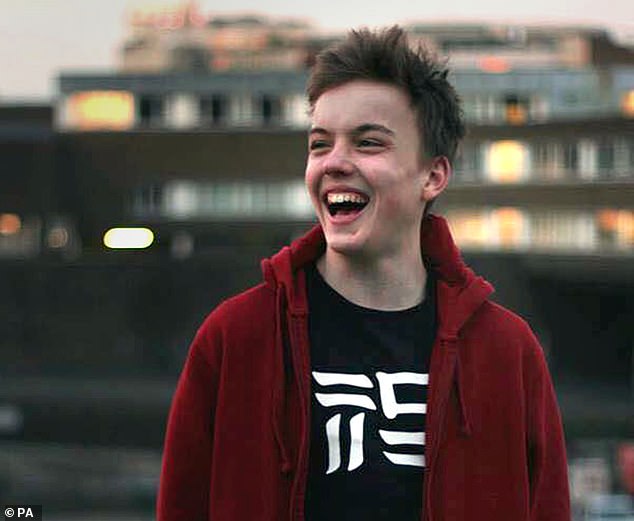 Nye Frankie Newman (pictured above), from Aldershot, who died on the Paris metro 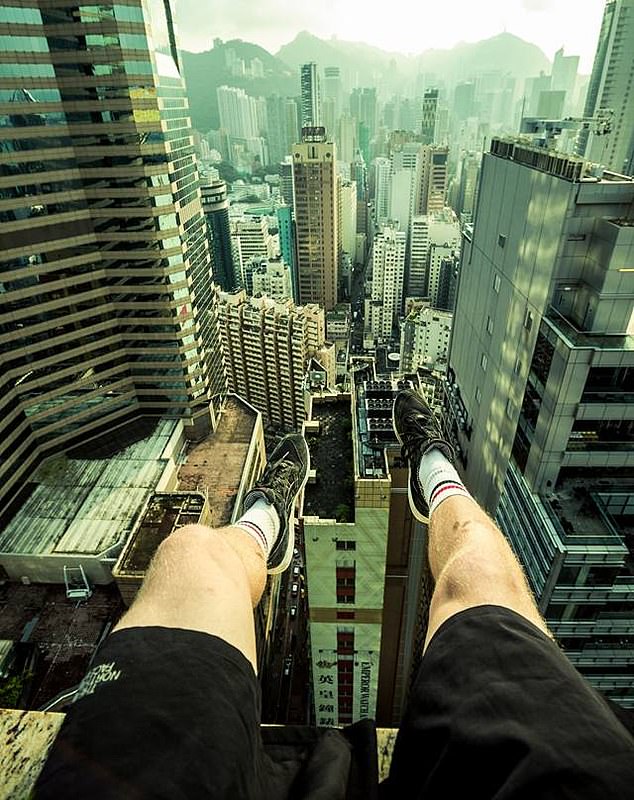 Free-runner Nye ‘Frankie’ Newman was on his way with his girlfriend and a group of friends to see the fireworks at the Eiffel Tower when he climbed between the train carriages, popped up his head for a moment and was struck by an object.

His mother, Deborah, said at the inquest into her son’s death that she had been told Nye was taking ‘a selfie or video’ when he was fatally injured.

Then, in September 2017, came the death of mother-of-two Carmen Greenway. The 41-year-old graphic designer was cycling home after celebrating her mum’s birthday at a pub when she took a smiling selfie. Moments later, she fell off the bike near her home in Isleworth, West London, fracturing her skull. She died days later in hospital. 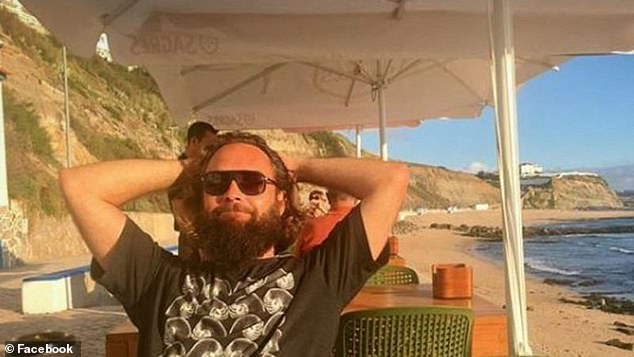 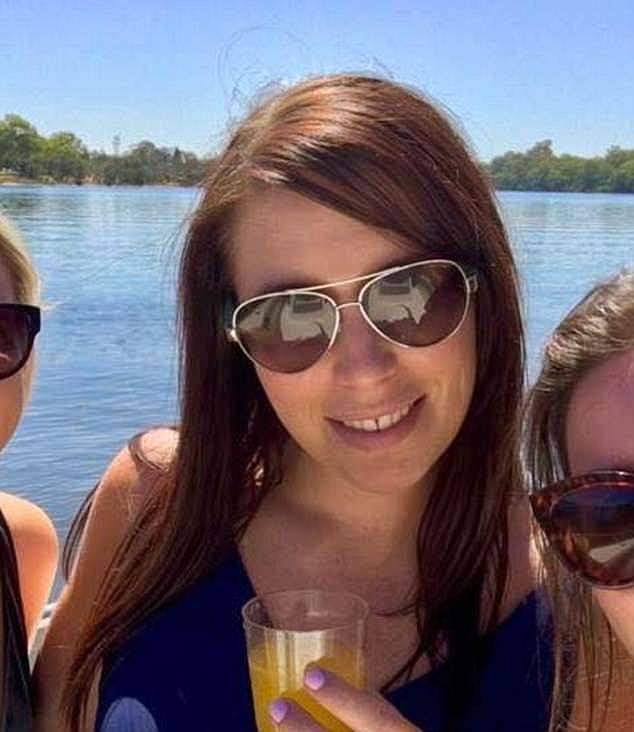 Louise Benson (pictured above), 37, originally from Bristol fell to her death in Portugal

In 2018, Louise Benson, 37, originally from Bristol, and her Australian boyfriend, Michael Kearns, 33, plunged to their deaths in Ericeira, Portugal. They were taking selfies from a 100 ft-high wall over the beach when they lost their balance reaching for a dropped mobile phone.

An inquest last year into the death of aspiring actress Bethany-Maria Beales, 22, heard she may have been trying to take a photo when she fell to her death from the 19th floor of a luxury apartment block in Moorgate, London.

And last year, two young, British holidaymakers — Jayden Dolman, 20, and Daniel Mee, 25 — plunged to their deaths after trying to take a selfie on a cliff in a holiday resort on the Costa Blanca. 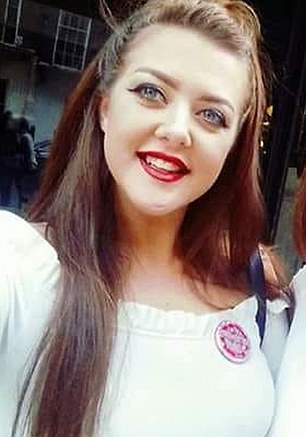 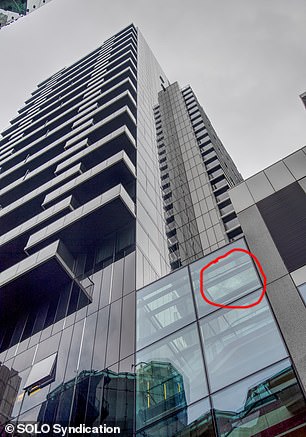 In 2018, there had been speculation over whether a selfie was to blame for the death of keen runner Andy Lawton, who fell from a cliff at a Welsh beauty spot. Council official Andy, 40, was spotted with his phone on the cliff near Nash Point lighthouse in the Vale of Glamorgan shortly before the tragedy.

At an inquest into the death, his father, Barry, told the hearing that his son had ‘a keen interest in his fitness’ and was ‘a bugger for taking selfies’.

Coroner Graeme Hughes told the inquest in Pontypridd that it was possible Andy might have taken a selfie, although the runner’s family were unlikely ever to find out exactly what happened in the seconds before his death. 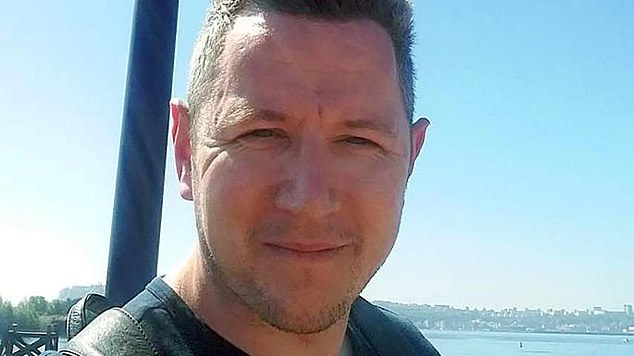 Andy Lawton (pictured aboce) enjoyed taking photographs on his regular runs, his father said he ‘was a bugger for taking selfies’ 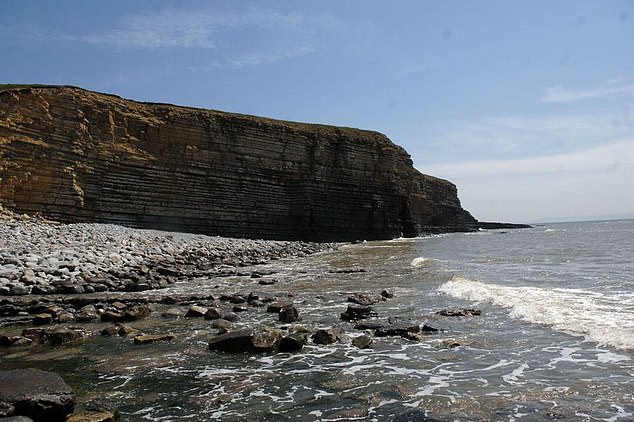 Last night, speaking to the Mail, Mr Lawton said it was by no means clear that a selfie had been to blame for his son’s death. But he added: ‘Having gone to visit Nash Point, I found the area to be very vulnerable to accidents happening and there are very few, if any, signs warning of danger.

‘There should be warning signs at beauty spots known to be dangerous — and maybe, if people take no notice of the signs, you do need ‘no-selfie zones’.’

Many experts and tourism authorities would concur.

The researchers behind the 2018 global study recommended that ‘no- selfie zones’ should be introduced at dangerous spots in popular tourist areas to make them safer. These would include at the tops of mountains, tall buildings and by lakes.

The most common cause of selfie tragedy is drowning, followed by transport accidents and falls.

Other causes of selfie-related death listed in the study included wild animals and firearms.

In May 2018, a man was mauled to death by a bear in India after trying to take a selfie with it. And in the U.S., selfies with a bear in the background had become such a phenomenon by 2014 that the Forest Service was forced to warn people of the danger of getting too close to the animals.

In 2015, five people were gored by bison in Yellowstone National Park in a three-month period. Three of them had been taking photos. ‘No picture is worth hurting yourself, others or the park,’ visitors to Yellowstone, in Wyoming, are now warned. ‘Be aware of your surroundings near wildlife, thermal areas, roads or steep cliffs.’

In Pamplona, Spain, officials have gone still further. Since 2014, taking selfies has been banned, punishable by a fine, during the city’s controversial bull runs.

At a similar event elsewhere in Spain, a 32-year-old man left the spectator area to take a selfie with the charging bulls and was gored, dying in hospital from his wounds.

Sometimes, the danger is rather less obvious. In 2016, a man in China was killed in a wildlife park as he tried to take a selfie with a walrus. The businessman had been taking videos and pictures to put on his social media account when the one-and-a-half-ton walrus grabbed him from behind.

While women take the most selfies, men, it seems, go to greater extremes for the perfect snap and so account for three-quarters of selfie deaths.

The selfie boom has been with us for more than a decade, but really took off when Apple introduced the front-facing camera on its iPhone 4 in 2010.

Now, front-facing cameras are commonplace, as are ‘selfie sticks’ (pictured left) and the filters beloved of the Instageneration.

Samsung has predicted that the average millennial will rack up some 25,000 selfies throughout his or her lifetime. But as self-snapped photos have risen in popularity (the word ‘selfie’ was added to the dictionary in 2013), so has the pressure to capture a picture that will take the internet by storm.

So just what is driving this dangerous trend?

Social media and celebrity psychologist Dr Arthur Cassidy says an obsession with getting the ‘perfect picture’ means young selfie-devotees are often oblivious to the risks they are taking.

Antics that people pre-social media would never have dreamt of are now commonplace. And it’s all, says Dr Cassidy, about getting a pat on the back from peers.

‘These young people taking dangerous selfies are looking for attention and validation. They are competing in one-upmanship to see who can get the most ‘likes’ and the most powerful social media identity in their peer group.

‘Their end goal is to increase their status in their own mind. They see dangerous pictures as a legitimate pathway to huge success on social media — ‘look at me. I am who I am and nobody can get a better picture of me than I can myself’.

‘The more spectacular and colourful the picture, the greater the shock value. They don’t realise they are doing something wrong and foolish and dangerous.’

Or, as another commentator puts it: ‘Social media is an attention economy where there are hundreds of thousands of pictures, so young people are often willing to take risks to have a shot that will catch others’ attention.’

Rooftopping, for instance, remains a trend. As its name suggests, it involves dangling off high-rise buildings and grabbing a picture for social media posterity.

But, as barely a month passes without another person dying in pursuit of the perfect snap, perhaps it’s time we looked again at selfie-mania and asked whether that killer shot is really worth the risk.