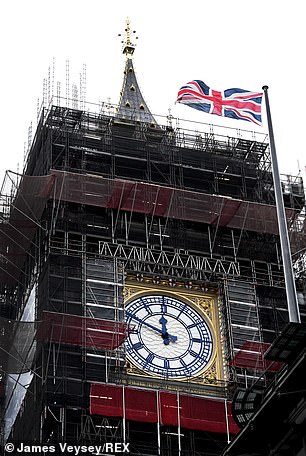 Big Ben’s bongs will be silenced on Brexit Day but campaigners want to raise £500,000 to get it going at 11pm on January 31

Clergy and bell ringers are up in arms over Brexiteer plans to peal church bells to mark Britain’s ‘independence’ as it leaves the EU on January 31 while Boris Johnson‘s ‘bung a bob for a Big Ben bong’ plea also floundered today.

Crowdfunders have set up multiple fighting funds but none have raised more than £200 after Downing Street failed to launch an official campaign.

And Leave campaigners’ calls for churches to chime across the nation when the UK leaves the EU at 11pm on January 31 were also being met with opposition by Church of England bishops and vicars.

Bell-ringing representatives also released a statement to say they do not endorse the act to be carried out in churches ‘for political reasons’ such as Brexit – Brexiteers have threatened to ignore them and ‘do it anyway’.

The 128-year-old Central Council of Church Bell Ringers said in a statement: ‘There are historical moments for which bells have been rung, [the] end of world wars for example. However, the central council, as a principle, does not endorse bellringing for political reasons’.

While the Bishop of Burnley, the Rev Philip North, told The Times: ‘The purpose of the church bell is to call people to worship and I regret any attempt to politicise this lovely tradition. I think we should be ringing bells on February 1, not to celebrate Brexit but to call people together to pray for our nation at this critical time: for unity, compassion and justice’.

Bishop of Buckingham Alan Wilson, said: ‘Two thirds of the population never voted for Brexit in the first place. It’s deeply divisive to ring church bells for something like this. Churches are there for the whole community, not for a political faction to crow over people they have beaten.’

Kent Rev Andy Bawtree says he would like to ring his church bells in River, Kent, but has to ask his parishioners first. 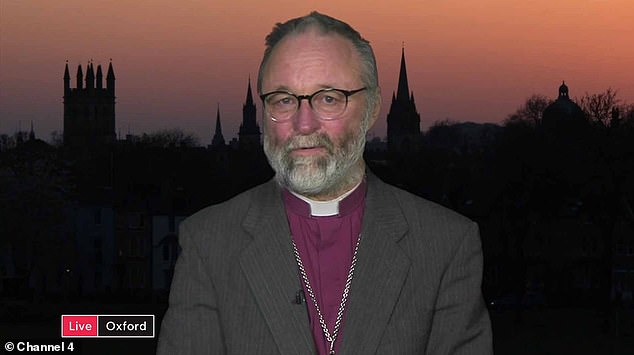 Bishop of Buckingham Alan Wilson, said allowing church bells to ring on Brexit day would amount to a ‘political faction crowing over people they have beaten’ 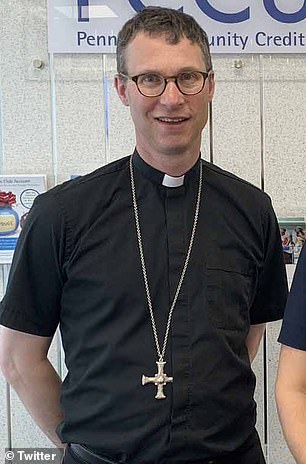 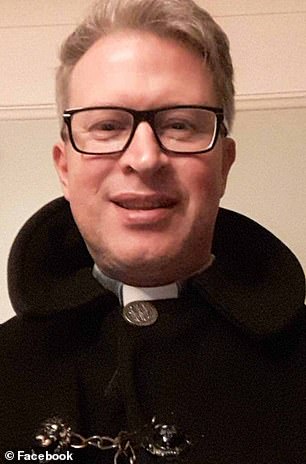 Rev Philip North, Bishop of Burnley, is also opposed to Brexit Day bell ringing but Kent Rev Andy Bawtree says he would like to but has to ask his parishioners first

During a debate last night, Lord Greaves claimed people were crying themselves to sleep at night over the UK’s withdrawal from the EU, as he warned against ‘triumphalistic behaviour’ on Brexit Day

The veteran peer said many Remainers and EU citizens were still crying themselves to sleep over Brexit.

‘They are feeling a sense of loss which is akin to bereavement and a grieving process has only just begun,’ he said.

Lord Greaves added: ‘In these circumstances, triumphalistic behaviour, festivals of Brexit and all the rest will simply make things worse.

He went on: ‘I am fearful that on January 31 some things may happen in some places which could be reminiscent of things happening in Germany in the early 1930s.

‘I am worried about this, because there is that sentiment amongst a hostile minority of the population.’

Rev Janet Allen, vicar at the church of St Peter & St Paul in Swaffham, told the Eastern Daily Press: ‘Brexit has been such a divisive issue that it would be deeply inappropriate’ – despite her local councillor demanding it.

Campaign group Leave.EU is leading calls for the ringing of church bells and said: ‘Just as we did to mark the Allies’ victory in Europe in 1945, we’re calling on patriots to ring the bell of their local church at 9am on Saturday February 1 to celebrate Britain’s newfound independence’

But as vicars and bell-ringing groups refused the spokesman added: ‘If the powers that be don’t like it? We’ll do it anyway.’

Big Ben has been silenced since 2017 with renovations under way, but ardent Brexiteers have called for the work to be paused so the bell can ring in the new relationship at an estimated cost of £500,000.

The Prime Minister said on BBC Breakfast on Tuesday that the Government was ‘working up a plan so people can bung a bob for a Big Ben bong’.

Health Secretary Matt Hancock said today: ‘If people want to pay for it, let the bongs bong’, adding: ‘Bong or no bong, we are delivering Brexit on January 31’.

Mark Francois, who has promised £1,000, said today ‘I think we will get it within 48 hours’ – but accused the House of Commons authorities of exaggerating the cost of bringing the currently silent bell back into operation.

Mr Francois told ITV’s Good Morning Britain: ‘It seems to me and many of my colleagues in the House of Commons patently daft that we have got the most iconic clock in the world – literally, it’s a world heritage site – that that should stay silent on this occasion.’ 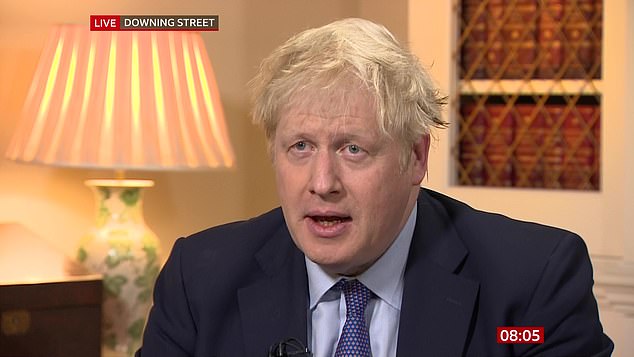 He claimed the costs were ‘massively exaggerated’ because ‘officials in the House of Commons just don’t want to do it’.

Commons bosses threaten to kibosh ‘Big Ben bongs’ plan even if £500,000 is raised

The Commons authorities last night suggested they may be unwilling to bring Big Ben back into service even if the money is raised.

In a statement, the House of Commons Commission said: ‘There has been a suggestion that the cost of striking the Bell could be covered by donations made by the public. This would be an unprecedented approach.

The House of Commons has well established means of voting through the expenditure required to allow it to function, and to preserve its constitutional position in relation to Government.

‘Any novel form of funding would need to be consistent with principles of propriety and proper oversight of public expenditure.’

The bell should ring to allow those who want to celebrate to mark the occasion, he said, but acknowledged that not everyone would be cheering.

‘There are some that don’t, they can watch Netflix or do whatever they want to do,’ he said.

Boris Johnson yesterday appealed for public donations to pay for Big Ben to chime Britain out of the European Union.

Downing Street said the Government could not justify the estimated £500,000 cost of bringing the bell tower out of mothballs for it to bong at 11pm on January 31.

But Tory MPs yesterday redoubled their efforts to ensure the commemoration takes place. Tim Loughton offered to climb the Elizabeth Tower and ring Big Ben himself with a sledgehammer.

Peter Bone suggested that anti-Brexit officials had intervened to inflate the cost.

Speaking on BBC Breakfast, Mr Johnson said: ‘We’re working up a plan so people can bung a bob for a Big Ben bong because there are some people who want to.

‘They seem to have taken the clapper away, so we need to restore the clapper in order to bong Big Ben on Brexit night. And that is expensive, so we’re looking at whether the public can fund it.’

The House of Commons Commission, which has responsibility for Big Ben, ruled out bringing it back into use for one night after a study warned it could cost £500,000 – more than four times the original estimate. 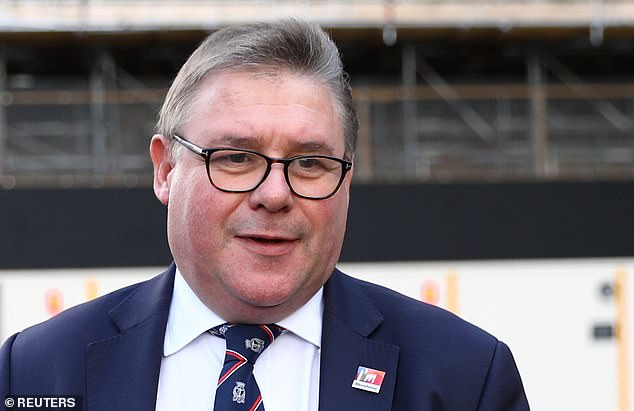 Conservative MP Mark Francois has pledged to donate a £1,000 and has accused the Commons authorities of inflating the cost to £500,000 to stop it happening

Commons Speaker Lindsay Hoyle, who is chairman of the commission, said: ‘The commission believes it is important to weigh up the costs this would involve if Big Ben is to chime on January 31. You are talking about £50,000 a bong.

‘We also have to bear in mind that the only people who will hear it will be those who live near or are visiting Westminster.’

Big Ben is undergoing long-term repairs and has not been chiming regularly since 2017. However, the famous bell is brought back into service for key national events such as Remembrance Sunday and New Year’s Eve.

Mr Bone said: ‘I do not understand how it is that the bell can bong on December 31 but can’t bong on January 31 without incurring an absurd bill.’

Mr Loughton added: ‘I am happy to volunteer to go up to the bell tower with a sledgehammer and bash Big Ben 11 times for free. Perhaps we should have a competition for the privilege.’

The Commons authorities yesterday defended the cost, saying the clock mechanism which powers the hammer that strikes the Great Bell was dismantled and removed as part of the refurbishment project.