Celebrities have joined in the social media frenzy around Brad Pitt and Jennifer Aniston holding hands at the SAG Awards last night.

The pair, who divorced in 2005, were pictured backstage briefly clasped together after both won prizes at the Screen Actors Guild Awards in Los Angeles.

Jamie Lynn Spears, Britney’s actress sister, wrote on Instagram: ‘WE WILL BE TELLING OUR GRANDKIDS ABOUT THIS. THATS HOW IMPORTANT THIS IS.’

As Brad gave his acceptance speech, Aniston could be seen laughing as Pitt joked about his love life and even being on Tinder. 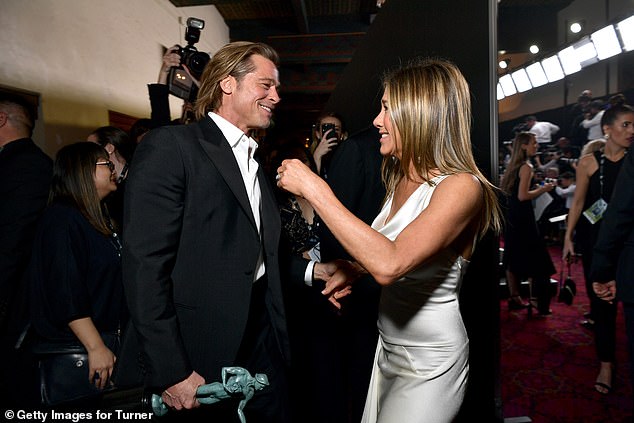 Friendly exes: The pair looked truly happy to see one another when they met backstage 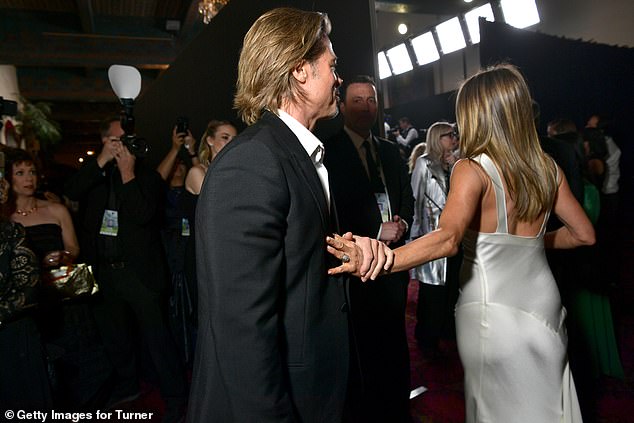 Touchy-feely: Pitt briefly held Aniston’s hand as she turned away from him

But just minutes afterwards, Aniston won her own SAG for her role in The Morning Show.

As she delivered her acceptance speech, cameras caught Pitt stopping to watch his ex-wife’s big moment.

Aniston, whom Pitt famously left after five years of marriage, received an award for The Morning Show, as her ex-husband watched on a TV backstage. ‘Oh wow,’ he reportedly said as she walked to the podium in a silver dress.

Rich Kids of Beverly Hills star Morgan Stewart, Once Upon a Time in Hollywood’s Rumer Willis and songstress Jordin Sparks all posted replies to the photo on Instagram.

‘Omg,’ Sparks said. While Stewart wrote: ‘I’m not emotionally prepared to handle this at this stage in my life.’

And model Brooklyn Decker wrote: ‘Is that a finger UNDER a lapel?!?’

Blink-182 bassist Mark Hoppus tweeted: ‘Look. If I can get My Chemical Romance and the Jonas Brothers back together, I can definitely get Brad Pitt and Jennifer Aniston back together. 2020 is the year I’m gonna make it happen.’ 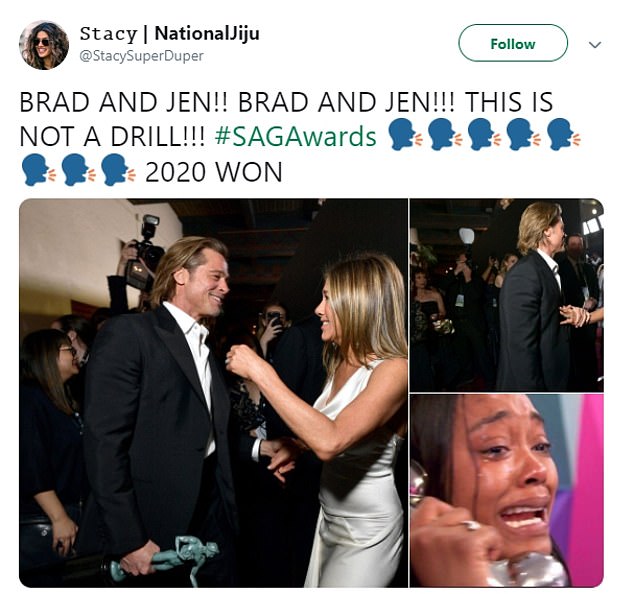 Brad, 56, and Jen, 50, attended the same Netflix after-party following the main event, partying the night away at the Sunset Tower in Los Angeles with their A-list friends.

Brad and Jennifer’s romance: A timeline

1998: The couple go on their first date after being set up by their agents

1999: The duo make their public debut on the red carpet AT the Emmy Awards

2000: Brad and Jennifer tie the knot in an incredible Maliby ceremony

2004: Brad meets Angelina Jolie while they were filming Mr And Mrs Smith, where they fall in love

2019: Brad and Jennifer attend the same Golden Globes after-party before their sweet reunion at the SAGs

The former couple, who divorced in 2005, arrived separately and mingled with the crowd at the bash, who included Brad’s Once Upon A Time In Hollywood co-star Leonardo DiCaprio.

The pair kept their distance at the party after their brief backstage reunion that sent fans into a spin on social media.

They finally touched and held hands – if only briefly – and there was plenty of photographic evidence to prove it.

But Brad and Jen weren’t spotted together at the Netflix bash, instead opting to catch up with other friends.

Jennifer was looking lovely in the same silk dress she had worn to the main event, exuding elegance as she celebrated her win.

Brad worked the room, chatting to everyone from close pal Leo to Game Of Thrones star Peter Dinklage.

‘Brad Pitt is on Tinder? I guess I am on Tinder now too,’ wrote another Twitter hopeful.

‘I can’t believe this month gave us Meghan and Harry and Brad and Jen. 2020 quit while you’re AHEAD,’ said another.

‘GUYS Brad and Jen was YEARS ago ok ENOUGH already now would everybody PLEASE just STOP and tell me WHERE I should get this TATTOOED,’ said another witty online poster who was marveling at the long-for images. 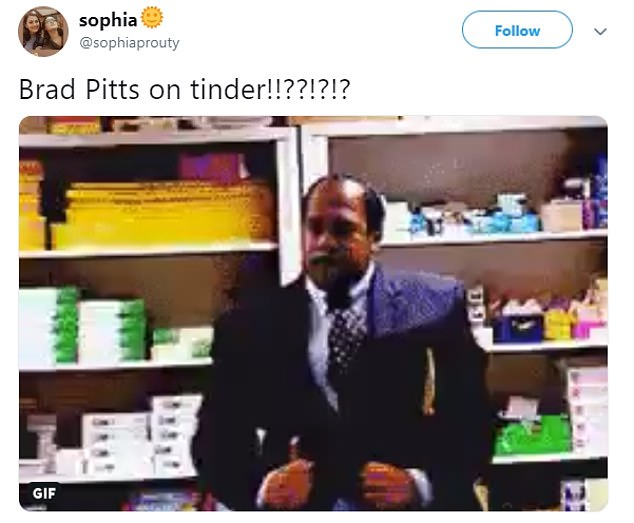 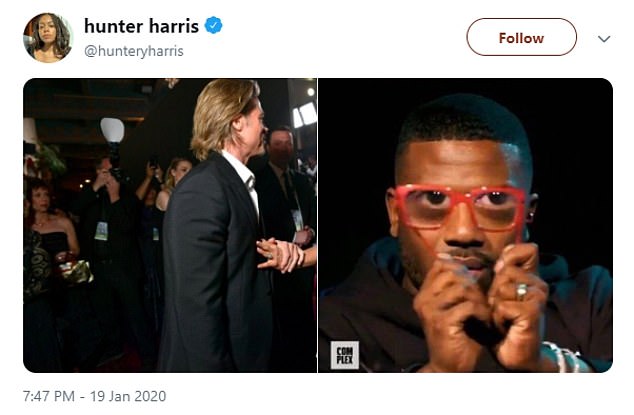 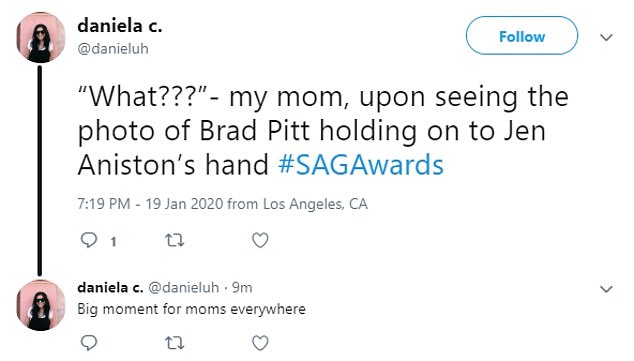 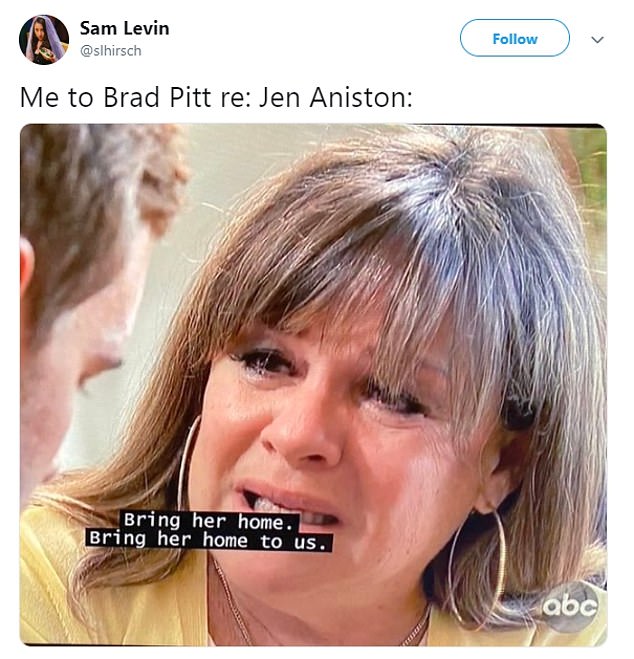 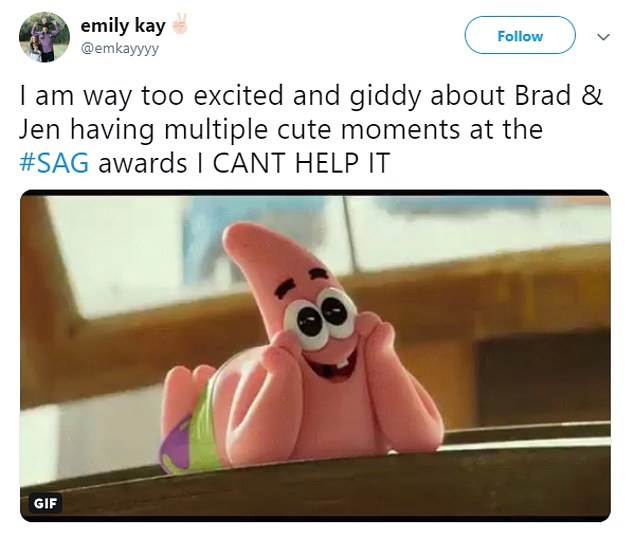 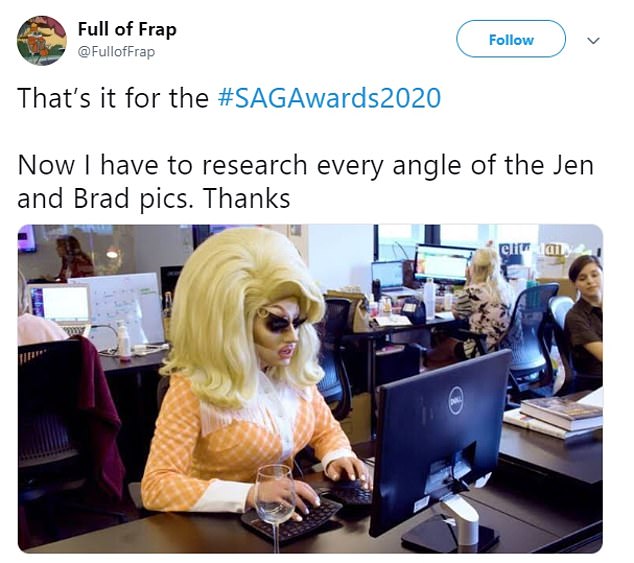 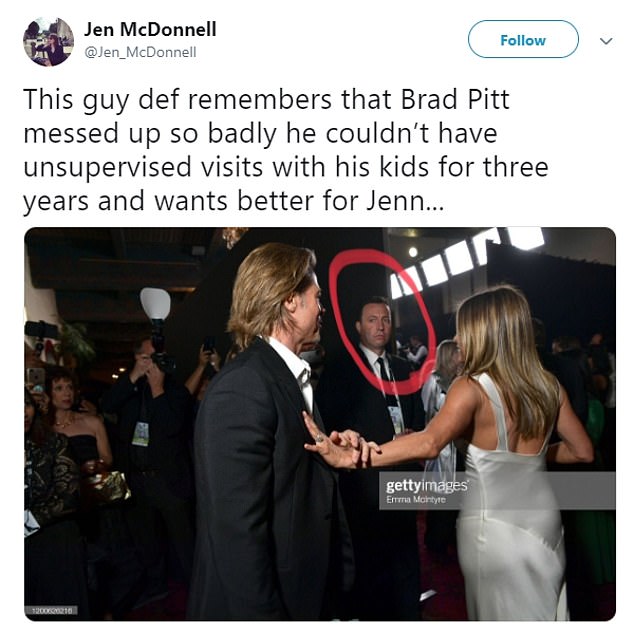