A three-year-old boy died in a caravan blaze and his brother, four, is now fighting for his life after they went for a weekend sleepover with their father who could only save one of them from the flames.

Father Shaun Harvey, 28, bravely rescued his four-year-old son from the inferno but the flames were too strong for him to reach his three-year-old brother.

Erin Harvey, 28, was told her ex-husband and her eldest son were in hospital after the blaze at a remote country village. 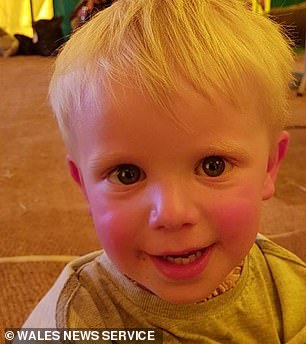 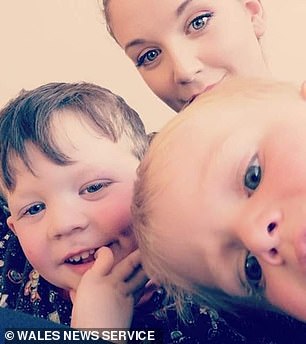 Erin Harvey (right, with her sons) lost her youngest (left) in a tragic caravan fire at the village of Ffair-Rhos

Locals told how Erin rang them in a state panic asking what had happened to her youngest child.

Next-door neighbour Miriam Connolly, 54, said: ‘I didn’t have the heart to tell her that her little boy had died.

‘It is so tragic, he was such a lovely little boy who loved coming stay with his dad at weekends. I told her to get in touch with the police – it’s so heartbreaking.’

Tree surgeon Mr Harvey was living in a caravan in his stepmother’s garden after breaking up with the boys’ mother last August.

The three were asleep in the caravan at 5am on Sunday morning when a blaze broke out, possible from an electrical fault.

Neighbour Mrs Connolly and her husband Sean were woken by shouts and a plant pot being thrown at their window. 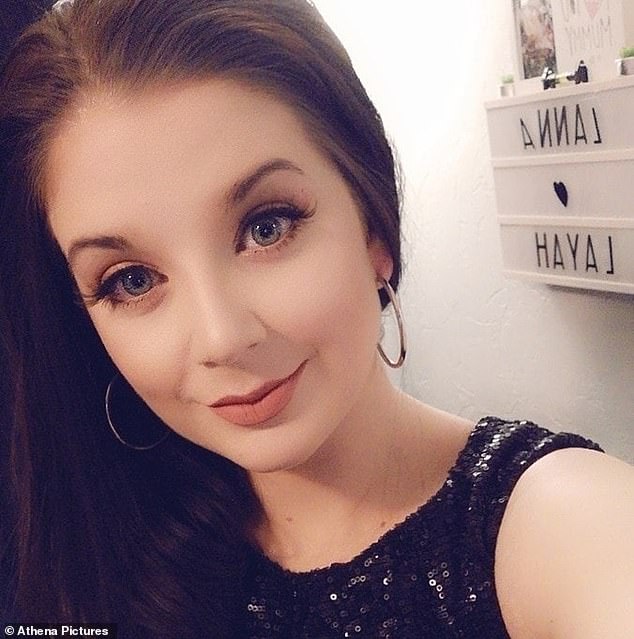 Mrs Connolly, 54, said: ‘They kicked the fence down to come to us for help. It was horrific. He was carrying his eldest boy in his arms, the poor tot had no eyebrows left.

‘His father was in his underpants and the skin had been burned off his neck, shoulders and back.

‘He’s had tried so hard to get back into the caravan to reach his other little boy but it as an inferno. It went up in a matter of seconds.’ 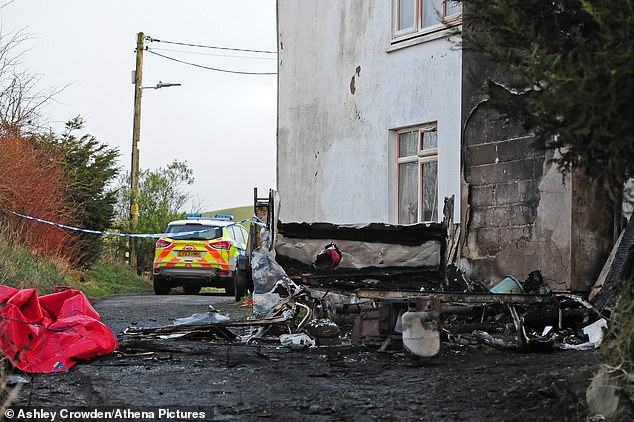 Pictured: The scene after the blaze engulfed a caravan, killing the three-year-old and leaving a four-year-old fighting for his life

The couple said Shaun was running an electric cable from the house into the two-berth touring caravan in the village of Ffair-Rhos, near Aberystwyth, Cardiganshire.

Mr Connolly, 55, said: ‘Shaunwas screaming: ‘My boy’s dead. my boy’s dead. I’ve killed my boy. I was telling him that no one had killed anybody – but he was in such a state.

‘The caravan went up like a tinder box, we were trying to reassure him he did everything he could to save his child. 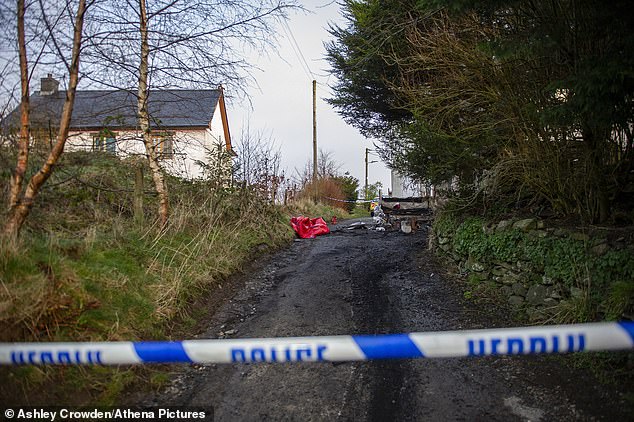 Pictured: A cordon blocks off the scene in Ffair-Rhos, where a father frantically tried to save his sons but lost one child

‘We ran a cold bath for him and his little boy, they were both in extreme pain. They asked for potato peelings which are supposed to be good for burns.’

Shaun and his eldest son were taken to hospital in Aberystwyth. The boy was later flown by air ambulance to a special burns unit in Bristol where he is in a critical condition.

Mr Connolly said: ‘Shaun is a lovely guy, he’s always got time to have a chat, He loves those boys so much. They were a nice little family, we would hear his playing with the boys in the garden. 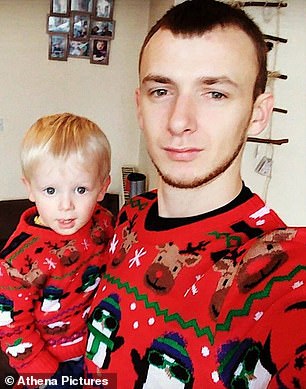 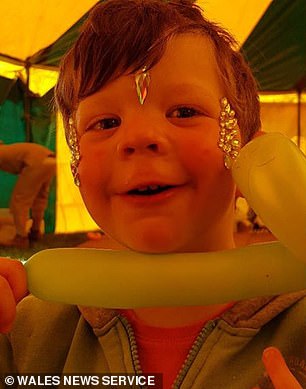 Shaun Harvey (pictured, left) saved his eldest son (right) from the fire, but could not save the youngest (left)

‘I know they were running an extension cable from the house into the caravan and that’s what the police and fire service are looking at.’

Lancashire-born Shaun is in a stable condition in hospital with his father Tony at his bedside.

Erin, who lives in the nearby village of Pontrhydfendegaid, was being comforted by police and relatives.

Another neighbour said: ‘The whole village is in shock, it’s not the type of thing that happens here.

‘But this is a close-knit community where people look out for each other and we will be there for the family.’

Forensic officers and a fire investigation team have been sifting through the gutted remains of the touring caravan to discover what started the fire.

A major incident room has been set up at 15 miles away in Aberystwyth where police are asking for information about what they described as a ‘highly traumatic incident’.

Detective Chief Superintendent Steve Cockwell said: ‘We received a call at 5.35am today about a caravan on fire in the village of Ffair-Rhos.

‘Inquiries so far lead us to believe that three people were inside the caravan at the time the fire broke out.

‘These were a father and two children – a four-year-old, and a little boy who we believe to have been aged three.

‘While the father and the eldest child were able to get out of the caravan, the younger of the siblings was tragically found deceased inside.

‘Our thoughts are with his family at this extremely difficult and traumatic time, and specialist officers have been put in place to support them.

‘The father is currently in a stable condition in hospital, while the four-year-old is critical but stable. Both suffered burns.’

Dyfed-Powys Police confirmed CID officers were called into the inquiry because of the nature of the fire.

Child Supt Cockwell added: ‘This was a tragic incident, and we will be doing all we can to find answers for the family, whose world will have been torn apart by this morning’s events.

‘We are also working closely with Mid and West Wales Fire and Rescue Service who were in attendance when our officers arrived.

‘We would like to thank our colleagues at the fire service for their professionalism in dealing with what turned out to be a highly traumatic incident.

‘We would like to speak to anyone who was in the Ffair Rhos area around the time of the fire, who might have information that could help our investigation.’

Dyfed-Powys Police said: ‘Specialist officers are supporting the family at this traumatic time.

‘Police and Fire investigators continue to examine the scene though the circumstances are not currently being treated as suspicious.

‘Police would like to speak to anyone who was in the Ffair Rhos area around the time of the fire, who might have information that could help the investigation.

‘Anyone with information is asked to call police on 101, using Storm reference 39 of January 19.’