A couple who starved their wealthy ‘friend’ to death had spent hundreds of pounds in supermarkets weekly using HIS money, a jury discovered today.

‘Controlling’ mother-of-three Lynda Rickard was a ‘carer’ for Anthony Sootheran following the death of his mother Joy – aged 92 years – who died from old age and dementia in August 2012.

The court heard how just before Joy’s death, hundreds of pounds was spent in supermarkets more than once a week and numerous cash withdrawals were made on a regular basis. 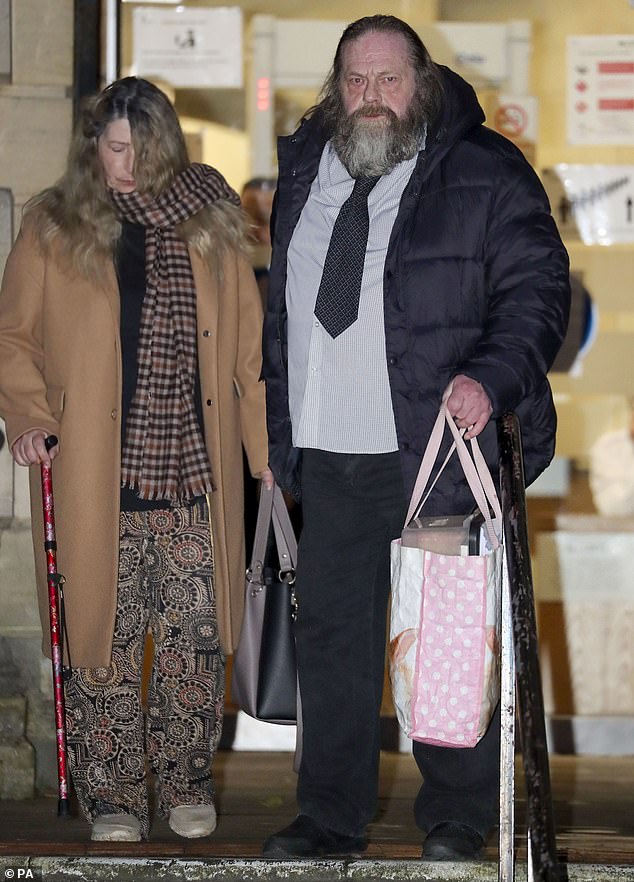 Mr Saxby QC said: ‘If all the cash withdrawals and cheques written after 2008 were not authorised by Joy Sootheran, then the total value of suspicious transactions is just over £165,000.’

Ironically, Anthony was found dead in his bedroom on March 18 2014, his body in a state of severe malnourishment.

The court heard that in the months after his mother’s death, Anthony spent time ‘hibernating in his room’ and did not want to be helped for fear that he would be returned to hospital under a Mental Health Order.

He had previously been sectioned for three months suffering from severe anxiety disorder.

At his mother’s funeral, Anthony Sootheran was described as ‘dishevelled, unkempt and wild looking’ by witnesses.

Mr Saxby said: ‘His being isolated suited Lynda Rickard – it allowed her to tighten the net around him and exert her control over him and his affairs, over what he thought and what he did.’

Deborah Charles, a woman who visited Anthony a year before his tragic death, said: ‘It seemed that when Anthony was alone, he had his own thoughts and freedoms. However, when he was with Lynda, it was she that controlled everything. He was very subservient to her.’ 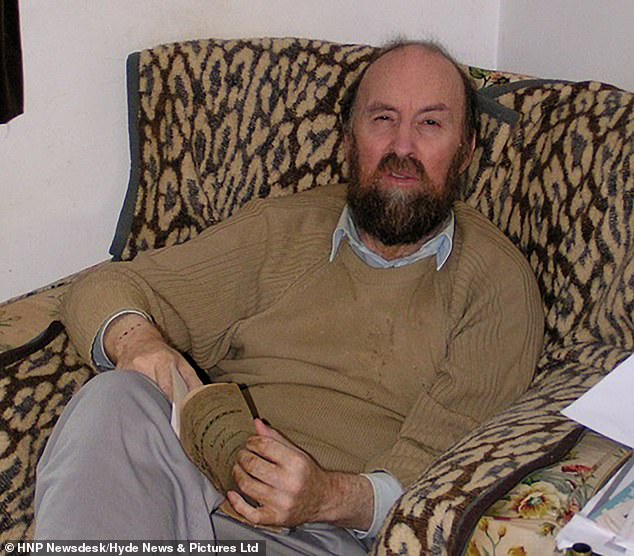 James ‘Anthony’ Sootheran, 59, was found dead at his home in South Newington, Oxfordshire

Mr Saxby added: ‘The truth is that Anthony Sootheran was being controlled. He was a highly vulnerable person who was being exploited for financial gain.’

The jury heard that 59-year-old Anthony, who died from malnourishment, was held ‘captive’ in a ‘foul, unhygienic, cell’ by a controlling carer who wanted a piece of his £3.5million estate.

Manipulative Lynda Rickard isolated him from his adult daughter, Hannah, family and friends, turning away everybody who called to see him, it was revealed by the prosecutor.

Just six months before his death, Richard Stubbs, a man who used to see Anthony to sort out the family trust fund, visited him at High Havens Farm and was astonished at what he saw.

The court heard that on arrival, 61-year-old Lynda attempted to cancel the meeting as she had many times before but Mr Stubbs persisted and forced his way into Anthony’s bedroom upstairs at around 4pm.

Mr Saxby said: ‘Both Anthony and his room, were in a terrible state.. He was thin and frail. The bed linen was stained and looked like it had not been changed in months. A window pane was broken.

‘In the corner, there was a pile of Anthony’s hair. There was no television in the room. There were no books, nor magazines. In short, it was a cell – a foul, unhygienic, cell.’

Anthony told Mr Stubbs that he never left his room and had last seen Lynda the previous evening, meaning he had not eaten or drunk that day, a jury heard.

‘Anthony said he was worried about upsetting Lynda Rickard and scared of being evicted and placed in a mental health institution. He was totally dependent on Lynda Rickard, and she was failing to feed him or take any care to ensure he had safe, clean living conditions,’ the prosecutor added.

Mr Stubbs was so horrified that he took photos which the jury members were show at today in Reading Crown court. 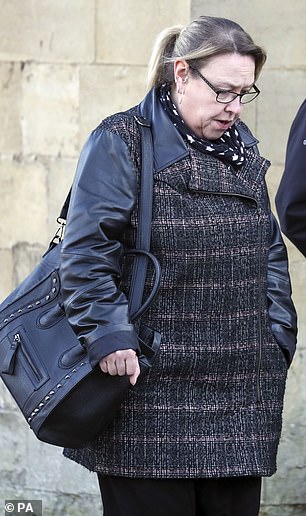 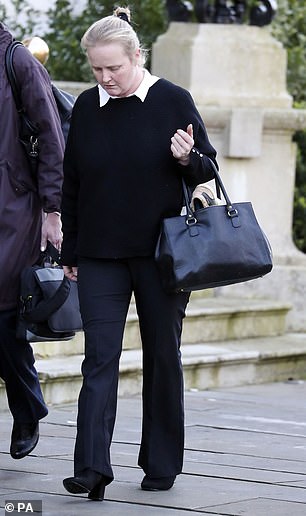 Shanda Robinson (left) and Denise Neal (right, both pictured outside Reading Crown Court on Monday) are both charged with one count of fraud by false representation

Lynda, 61, and Wayne Rickard, 64, are accused of murdering James ‘Anthony’ Sootheran, 59, who was found dead at his home in South Newington, Oxfordshire.

Mr Sootheran, who once weighed 17 stone but had become a shell of his former self, was discovered by a doctor in 2014 who had called in to check on his health.

The Rickards are on trial alongside Michael Dunkley, 48, Denise Neal, 39, and Shanda Robinson, 50, who are charged with fraud. All five deny the charges.

He said the alleged victims in the case, Mr Sootheran and his mother Mary Joy Sootheran, who suffered from dementia prior to her death aged 92 in August 2012, were reliant on Mrs Rickard for care, but were ultimately ‘exploited’ by her.

‘She was eyeing a windfall,’ Mr Saxby said. ‘That windfall came to be dependent on Anthony Sootheran’s death. And she got impatient, and worried that the windfall might elude her.’ 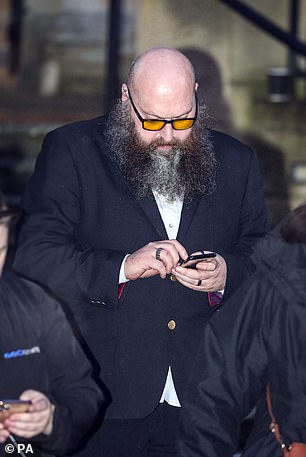 The court heard that Mr Sootheran, who owned High Havens Farm in South Newington, had ‘complex’ mental health issues and was a recluse who was prone to self-neglect.

‘She achieved (this) by isolating him, utterly neglecting him, failing to obtain appropriate medical care for him and ultimately, depriving him of food and drink.

‘In the simplest of terms, assisted by her husband, she starved him to death, thereby securing for herself and her family the windfall she craved.’

He said Mrs Rickard had already admitted forging the wills of Mr Sootheran and his mother.

The forged wills entitled Mrs Rickard to half of Mrs Sootheran’s estate, valued at just under £1.5million, and a third of Mr Sootheran’s, worth about £3.5million, the court heard.

The jury was told Mrs Rickard had also pleaded guilty to four fraud charges, two counts of forgery, two counts of conspiracy to pervert the course of justice, and possession of articles for use in fraud.

Mr Saxby said the Sootherans were a wealthy family that owned land in Yorkshire and had ‘substantial’ savings and investments.

They moved into High Havens Farm in 2008 to join the Rickards, who were renting the property from them. It was agreed that Mrs Rickard would care for Mrs Sootheran, the court heard.

Mr Saxby said: ‘Lynda Rickard says that Anthony Sootheran’s demise was a consequence of how he chose to live his life and that his death was entirely coincidental to her having forged his will.

‘Instead, she did everything she could to help him and was devastated by his death.’

Mr Saxby said Mr Rickard denies ‘having anything to do with Mr Sootheran’s death’, adding: ‘Indeed, it is his case that he had very little to do with Anthony Sootheran full stop.’

Mrs Rickard is further charged with the manslaughter of Mr Sootheran through gross negligence, while Mr Rickard, 64, is accused of causing or allowing the death of a vulnerable adult.

Mrs Rickard also denies a charge of fraud, in that she allegedly abused her position as carer for Mr Sootheran by allegedly using his money for her own purposes.

They are also both accused of a single count of fraud by false representation relating to Mrs Sootheran.

They deny all of the charges against them.

Dunkley, of Bloxham, and Neal, of Lower Tysoe, Warwickshire, are charged with one count of fraud by false representation.

It is alleged that between January 28 and May 31 2014, Dunkley and Neal falsely claimed a will in the name of Mr Sootheran, dated February 19 2014, was genuine.

Robinson, of Banbury, is charged with one count of fraud by false representation between January 1 2012 and September 30 2012.

It is alleged that Robinson falsely claimed a will in the name of Mary Joy Sootheran was genuine and had been witnessed in her presence.

She is also accused of conspiracy to pervert the course of justice, which she denies.

June Alsford, 77, of Aynho, Northamptonshire, who is not standing trial, has already pleaded guilty to one count of fraud and one count of conspiracy to pervert the course of justice.