‘Uncomfortable to watch…why didn’t the royals help Thomas Markle more?’ Viewers feel sorry for Meghan’s father after bombshell documentary about his relationship with his duchess daughter

Viewers said they felt sorry for Thomas Markle in tonight’s bombshell documentary which charted his relationship with the Duchess of Sussex.

In a tell-all 90-minute film, he accused his daughter and son-in-law of saying ‘trashy things’ about him and revealed he cried while watching Meghan walk down the aisle on her wedding day.

Mr Markle also said that Meghan had promised to look after him in his ‘senior years’.

He said: At this point, they owe me. The Royals owe me. Harry owes me, Meghan owes me. What I’ve been through I should be rewarded for. My daughter told me that when I reach my senior years she’ll take care of me.’

Social media users watching the extraordinary film seemed sympathetic to Mr Markle, with a number of people saying he seemed like a good father and a ‘genuine guy’. 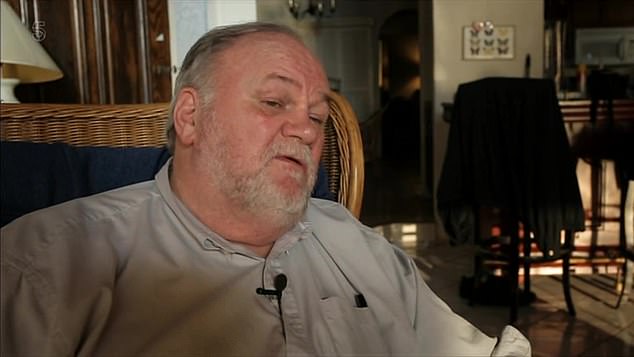 In a tell-all 90-minute film, he accused his daughter and son-in-law of saying ‘trashy things’ about him and revealed he cried while watching Meghan walk down the aisle on her wedding day

Shanelle Stephens said: #ThomasMarkle seems like he was a really decent dad to Meghan. It’s so sad now she’s married into a prestigious family she doesn’t want anything to do with him.

‘It’s not like he wasn’t there for her when she was growing up. He was in your life #MeghanMarkle reach out to him.

Another Twitter user said: ‘#Thomasmarkle has every right to tell his story. The guy has been slaughtered across the news and social media for two years.’

And Meg La Maniac, said: ‘The Thomas Markle documentary is a tear jerker. He’s a sweet humble man. Both taz and I are crying!’

Prince Harry, Duke of Sussex, Meghan, Duchess of Sussex and their baby son Archie Mountbatten-Windsor meet Archbishop Desmond Tutu and his daughter Thandeka Tutu-Gxashe at the Desmond & Leah Tutu Legacy Foundation during their royal tour of South Africa on September 25, 2019

Mr Markle’s intervention in the monarchy’s worst crisis for a generation came as the Queen‘s top aides finalised a deal for the couple, who are quitting as frontline Royals and leaving Britain to seek financial independence.

The 90-minute documentary explores the background to what he calls his ‘complicated’ relationship with his daughter and their dramatic fallout in the run-up to her wedding to Prince Harry in May 2018.

In addition, it charts Meghan’s formative years – she lived with Thomas between the ages of 11 and 18.