A married headmaster who sent flirtatious messages to pupils calling them ‘naughty’ and ‘stunning’ has received the backing of bosses at his £37,500-a-year boarding school.

Toby Belfield, once dubbed Britain’s strictest headteacher’ for his firm stance on sickness and pupil relationships, is accused of inappropriately messaging six girls.

In another message, the 47-year-old – who was married for more than 14 years but is now separated – even jokes about ‘expelling’ a pupil for having a secret tattoo.

Sources told MailOnline that the school’s board of management met last night to discuss the matter and are keen for Mr Belfield to stay in his position.

The Ruthin School in Denbighshire, north Wales did not deny this when approached by MailOnline today, stating that it could not comment on ‘individual employees’.

The head is said to retain the backing of the board chairwoman and has strong support thanks to the school’s strong finances and good exam results on his watch.

But some staff are appalled at what they say as senior management brushing the  issue under the carpet. 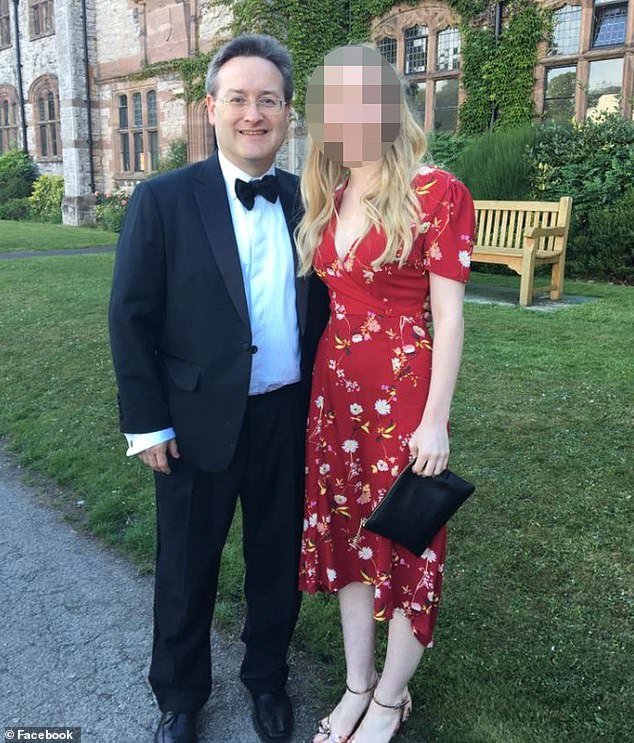 Toby Belfield, the headteacher at a £37,500-a-year boarding, sent flirtatious messages to pupils calling them ‘naughty’ and ‘stunning’ 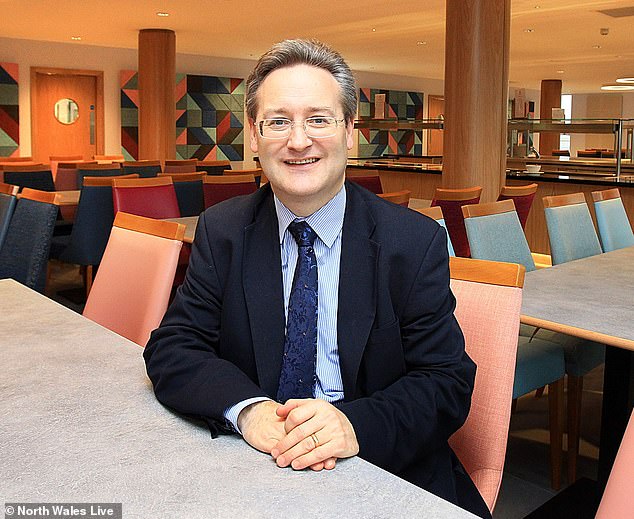 Mr Belfield has previously been dubbed Britain’s strictest headmaster when he sent an email to parents saying he was looking to expel students. 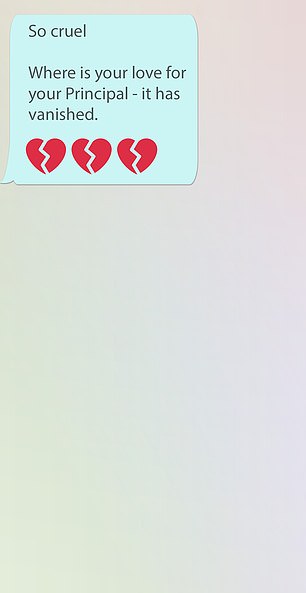 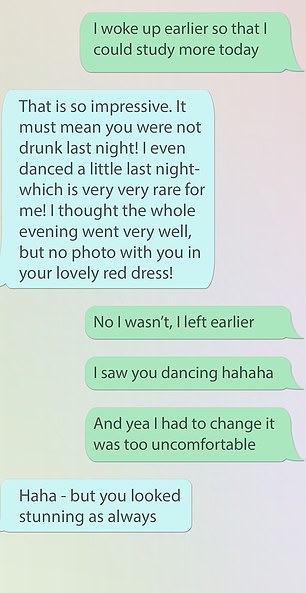 Toby Belfield complimented a student’s red dress, said he would visit pupils at University, and asked about their sex lives

It comes as a recent report following an unannounced visit to the school found it has ‘serious shortfalls’ as pupils were ‘not appropriately safeguarded’.

The Care Inspectorate Wales report, released this week, also found the school was run by an ‘autocratic and controlling management’.

It said: ‘We found some staff did not always feel supported, morale was low and they felt undermined and vulnerable by the lack of effective oversight by the council of management.’

The texts, sent to six different girls according to sources, are thought to have been circulated in north Wales before being passed to officials.

In the messages, seen by the newspaper, Mr Belfield told one girl: ‘Imagine if I found your new tattoo — I’d have to expel you.’

In another message, the teacher said: ‘Where is your love for your principal, it has vanished. So rude and cruel to me. Breaking my heart.’

The school takes in local pupils as well as secondary-age students from China and Asia.

Mr Belfield’s social media accounts show him boasting of first-class flights to countries such as China and Hong Kong to interview possible recruits.

He has previously been dubbed Britain’s strictest headmaster when he sent an email to parents saying he was looking to expel students over absences.

He told parents that too many students were registered as ‘sick’ when they were just ‘tired’.

He also said he disapproved of relationships between pupils and threatened to exclude pupils if they broke the rules. 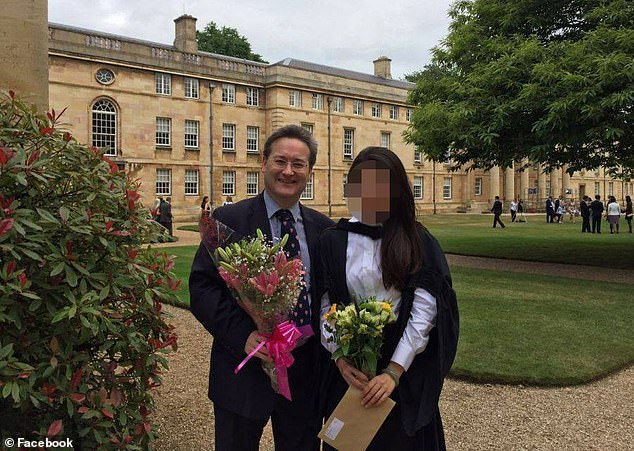 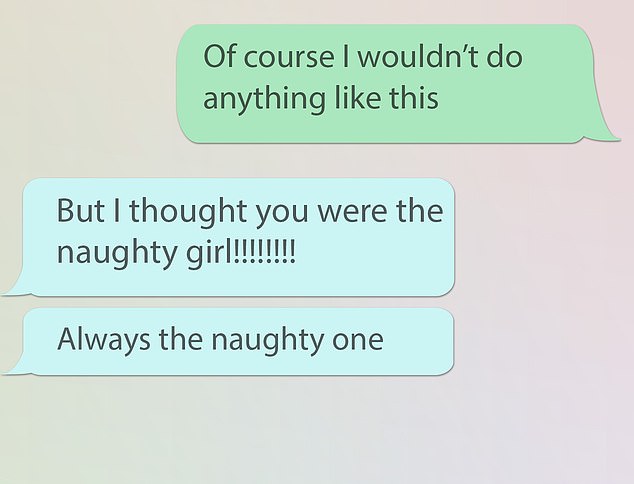 In another exchange he says:  ‘I’ll visit you at university to check you are still an angel.’

In a further communication he comments about a student’s sex life, saying: ‘I worry, definitely, about you and sexual behaviour.

‘You might need my support and you shouldn’t risk not having it… All the boarding staff have been told you are a potential sexual threat to young boys.’

Teachers have said he has not been seen since last term, and there has been no comment about where he is, or about the report stemming from the unannounced safeguarding visit.

One person linked with the school said they have been told ‘nothing’.

The report also found students did not ask for help with their mental health because they were scared of losing a place at university.

It said: ‘Policies are discouraging young people from coming forward, accessing support in relation to their mental health in fear of losing their place at school or university.

‘Policies relating to their emotional health were inadequate and discriminatory. 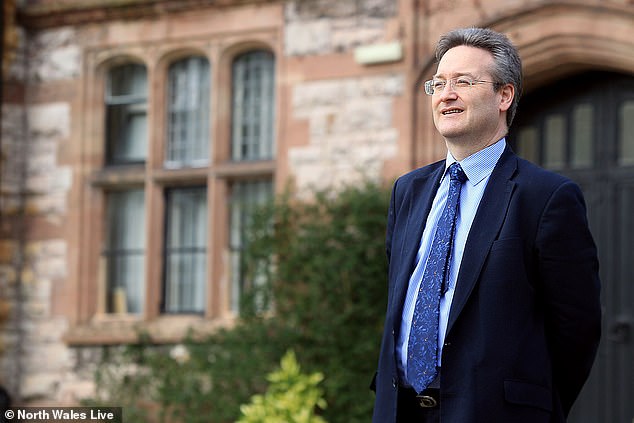 ‘The counsellor had not visited or supported any young person at the school in the 12 months preceding this inspection, even though the need was apparent for such a service.’

The report also found there was a failure to ensure staff followed a professional code of conduct that ‘resulted in young people being placed at risk of harm’.

A spokesman from Denbighshire council earlier this week, said: ‘Ruthin School is an independent establishment that is answerable to the Welsh Government.

‘It is not a local education authority school, therefore it is has no accountability to the local authority and the Council has absolutely no say on how the school is run. That is purely a matter for the school and its own regulators.

‘However safeguarding children and adults is a matter for the Council and its partners and we have previously raised concerns about safeguarding issues at the school which led to an investigation.

‘It is for the school to address the findings and recommendations of this and any other inspection reports. We continue to remain concerned.’

In reference to the report, a Ruthin School spokeswoman said earlier this week: ‘The Council of Management at Ruthin School was already carrying out root and branch strategic review at the time of the inspection, and that work is continuing.

‘We welcome the timely publication of the latest Care Inspectorate of Wales report, and are ensuring the observations and action points contained in it are fully addressed as part of our review.

‘The work we are doing now will ensure the school’s governance and operational procedures continue to keep pace with modern requirements.’

MailOnline has not been able to reach Mr Belfield for comment but has approached Ruthin School on several occasions.