That would appear to confirm the central accusation of a quid pro quo against the President, and has reanimated what seemed like a dead question a day earlier of whether enough GOP senators would vote to have Bolton and perhaps other witnesses testify.

For a Republican party that has remained remarkably unified throughout the Trump era and in the impeachment process in particular, the Bolton news presents the biggest challenge yet. While there is still the possibility that enough Republicans vote to allow witnesses, the pressure to do so, while seeming red hot Monday morning, appeared to have cooled by the evening. 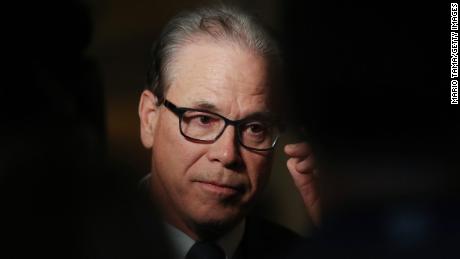 As senators arrived at the Capitol Monday morning, many Republicans seemed unprepared to hand the onslaught of questions. Several simply declined to answer.

Others diverted attention. When Sen. Pat Roberts was asked Monday morning to respond to the Bolton news, he responded, “I was reading Gone With the Wind.”

Reporters pressed: Why wouldn’t the Senate want to hear from a firsthand witness like Bolton? “Well, that’s a good question,” Roberts admitted.

As senators ducked and dodged, privately some GOP aides were more frank about the effect of the Bolton news.

“No one believed the White argument that Trump didn’t do it,” one aide told CNN. “He called for the investigations on TV! So, it is still a question of whether this is impeachable or if we should let the election happen.”

At a morning press conference, Sen. Mike Braun of Indiana admitted the obvious, that the Bolton news had indeed changed things.

“I think yes it probably will make the dynamic different,” Braun said. “I’m not going to deny it’s going to change the decibel level and probably the intensity of which we go about talking about witnesses.” 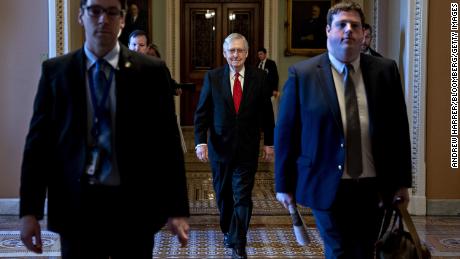 At a pre-trial GOP conference meeting at 11:30 a.m., McConnell tried to calm everyone down. According to senators in the room, McConnell offered one simple piece of advice: take a deep breath.

It seems to have worked. The change was perhaps best reflected by West Virginia Sen. Shelley Moore Capito. The typically talkative Republican declined to answer questions about Bolton as she entered the conference meeting.

“I don’t have any comments right now, thanks,” she said.

But after Monday’s session closed, Capito sounded more supportive than ever before that she would oppose allowing witnesses, telling CNN she hasn’t “fully made up my mind yet.”

“I think a lot of points were made tonight that would discount” calling witnesses, Capito said.

Not long after, Trump defenders in the Senate got some back-up from their GOP House colleagues, a group of whom made their way to the Capitol to provide cover from the Bolton fallout.

“It should surprise no one that in the eleventh hour that we would see a replay of what we saw over in the House, which are selective leaks designed to create a narrative that ultimately will change the conversation,” said Rep. Mark Meadows, a North Carolina Republican. “But this is nothing new.” 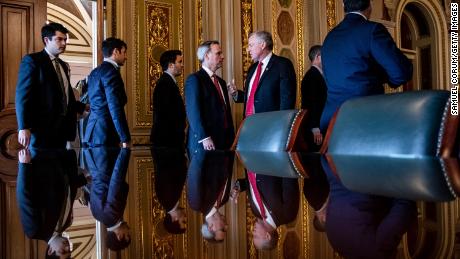 If there was an indication where things were going it came just minutes before the trial began at 1 p.m., in the form of a tweet from Georgia Sen. Kelly Loeffler, who aimed her fire at Utah’s Mitt Romney, who has clearly indicated he wants to hear from Bolton.

“After 2 weeks, it’s clear that Democrats have no case for impeachment,” Loeffler tweeted. “Sadly, my colleague @SenatorRomney wants to appease the left by calling witnesses who will slander the @realDonaldTrump during their 15 minutes of fame. The circus is over. It’s time to move on!”

Loeffler’s shot across the bow was a key indication that the Bolton news is testing the unity of the Republican Conference. Loeffler, just three weeks on the job, has been friendly with Romney and previously given money to his 2012 presidential campaign and super PAC.

By the time the trial gaveled into session just after 1 p.m., it appeared Republican senators were largely in the place they were before the Bolton revelations broke Sunday night: Sens. Susan Collins and Romney in support of them, Sen. Lisa Murkowski remaining “curious” about Bolton’s testimony, and no real sense of movement from any of the other 50 GOP senators. 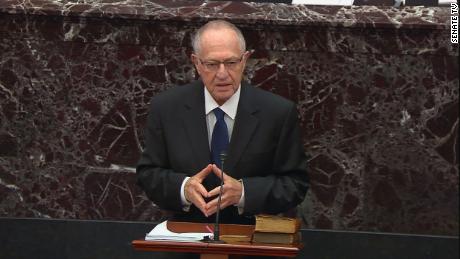 As the White House legal team went through its second day of opening arguments, Bolton loomed like an elephant in the room, present but unmentioned. It was only in the final presentation of the night when Dershowitz addressed Bolton head-on.

“Nothing in the Bolton revelations — even if true — would rise to the level of an abuse of power or an impeachable offense,” Dershowitz said in the middle of what otherwise sounded more like an law-school lecture than an opening argument in a trial.

Dershowitz continued with an argument meant to reassure the rattled GOP senators.

“Even if the President, any president, were to demand a quid pro quo as a condition to sending aid to a foreign country, obviously a highly disputed matter in this case, that would not by itself constitute an abuse of power,” he argued, adding, “Quid pro quo alone is not a basis for abuse of power, it’s part of the way foreign policy has been operated by presidents since the beginning of time.”

The entire presentation made a splash with the Republican conference, with multiple senators shaking Dershowitz’s hand. McConnell could be heard telling Dershowitz the performance was “wonderful.” Sen. Mike Lee of Utah told CNN he thought Dershowitz was “brilliant.”

On Tuesday morning, Braun was still singing Dershowitz’s praises. “I think he probably gave a lot more peace of mind to people that were wanting to see how to sort through it, when he made a strong case that each article was ill-founded,” Braun told reporters in the Capitol Monday morning.

The Dershowitz closing only strengthened the status quo, with multiple Republicans reiterating they’ll make the decision when the time for a vote on witnesses — which will likely be later this week — comes.

“Still going to make my decision when we finish this phase,” said Pennsylvania Sen. Pat Toomey. 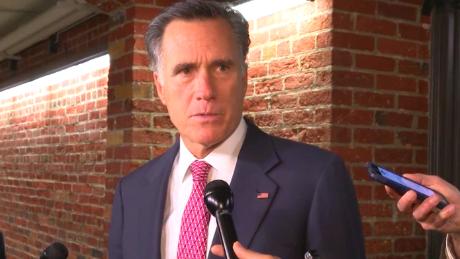 Even Romney, who has been speaking in support of witnesses, seemed unwilling to make the effort when asked by reporters about his position following the conclusion of Monday’s trial session.

“I’m really not going to comment on the process until it’s all completed,” Romney said as he boarded a Senate subway car. Then he added, as an afterthought, “I’d like to hear from John Bolton.”

As the subway car pulled away from the Capitol station, Romney — alone with an aide — took in a breath and sighed.