A controversial anti-Brexit group hijacked the White Cliffs of Dover before dawn today and beamed a pro-European Union film in English, French and German on to its famous chalk face to display a 32,000 sq ft ‘message to Europe’ that Britain will rejoin the bloc ‘before long’.

The guerrilla video, apparently projected from a boat below the cliffs, ends with the stars on the EU flag slowly disappearing – with just one star remaining, the line reads: ‘This is our star. Look after it for us.’ 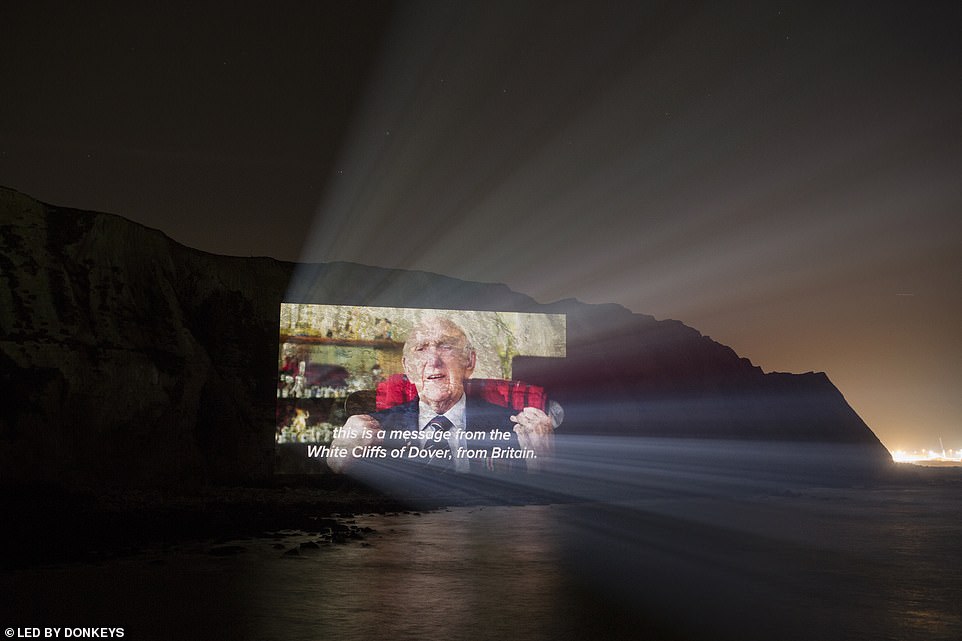 Protest group Led by Donkeys filmed two Second World War veterans including Welsh veteran Sid Daw, 95, and introduces the video beamed on to the famous cliffs, saying: ‘This is a message from the White Cliffs of Dover, from Britain’ 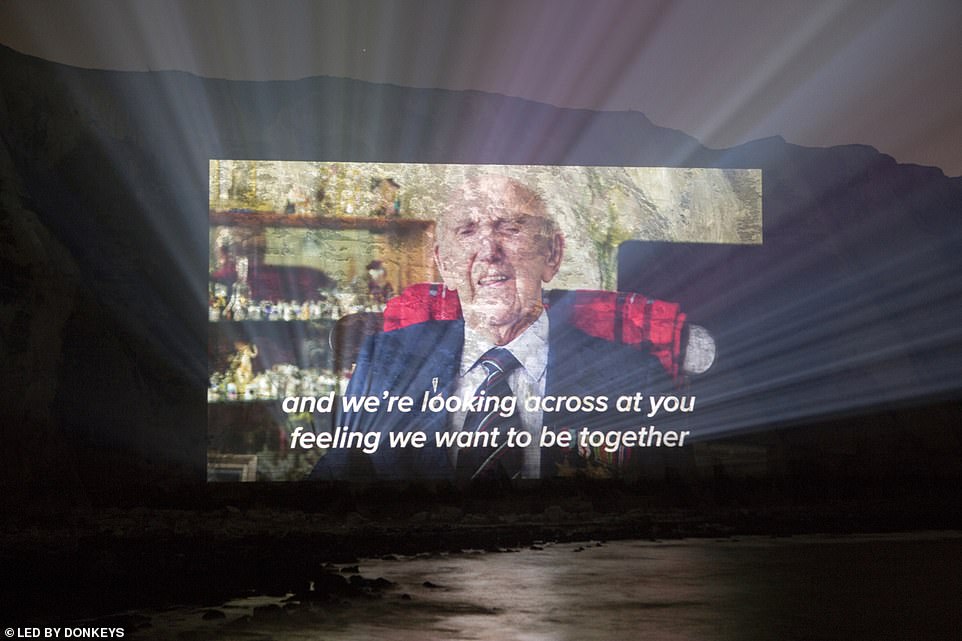 Mr Daw, who fought as a sniper in the Second World War, says of the EU: ‘We want to be together and we will be together before long, I’m sure’

Mr Daw, who was a sniper for the Allies, introduces the video and says: ‘This is a message from the White Cliffs of Dover, from Britain’.

Mr Daw, from Cardiff, fought in France, Holland, Belgium and Germany during the conflict.

He says: ‘First of all, I’m Welsh, and I’m British, and I’m European and I’m a human being. I feel very, very sad about it all because we don’t know which way things are going.’

Appealing to fellow Europeans on the Continent, he said: ‘Look from your side to this side, see these white cliffs, and we’re looking across at you feeling we want to be together and we will be together before long, I’m sure.’ 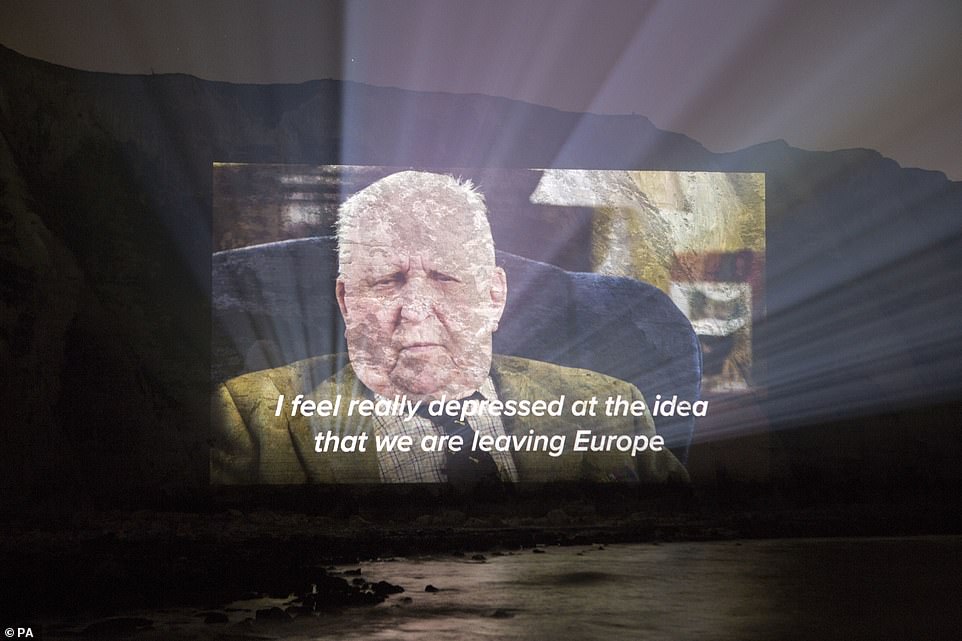 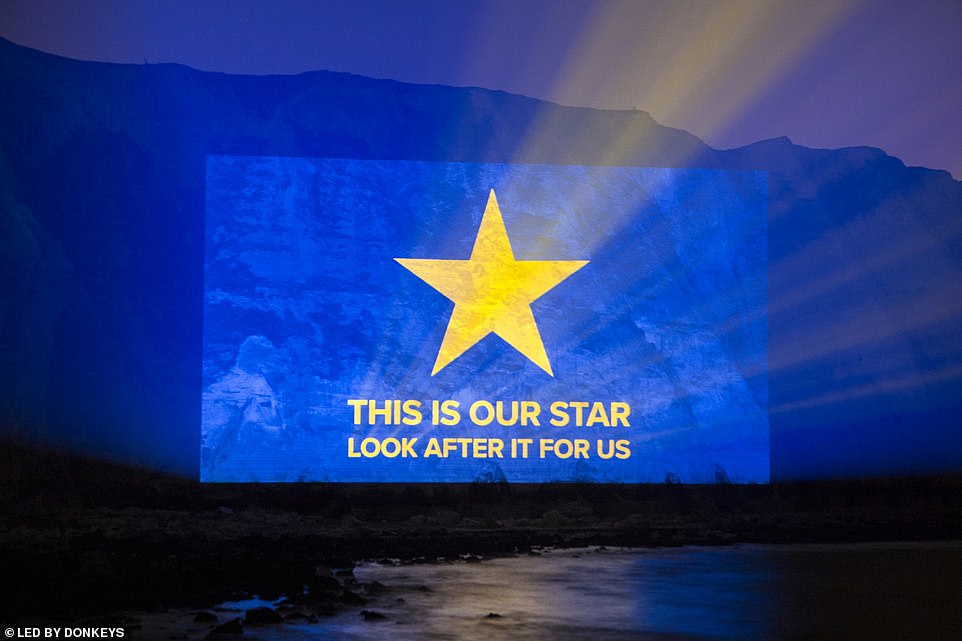 It ends ends with the stars on the EU flag slowly disappearing – with just one star remaining, the line reads: ‘This is our star. Look after it for us’

Brigadier Goodall spoke of his sadness about Brexit – with his words translated into French and German. 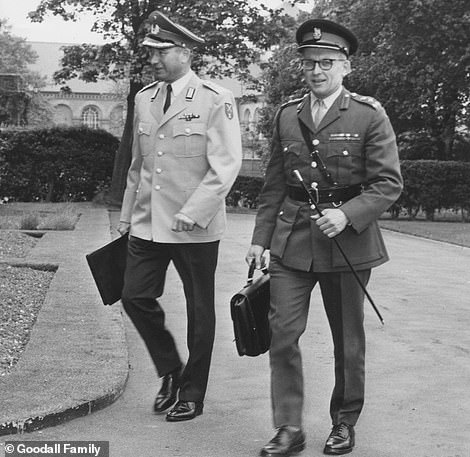 The 97-year-old, who served in the Army for 32 years, said: ‘I feel really depressed at the idea that we are leaving Europe because it has meant so much to me.

‘I like to be called a European. And the feeling that one has of comradeship as one goes round Europe is really quite something.’

The message was shown just after midnight today so as to be seen on Brexit Day itself.

Ben Stewart, 45, one of the organisers from Led By Donkeys, said that the group wanted to do something to mark the day.

He said: ‘It was a real honour to put their words up there. 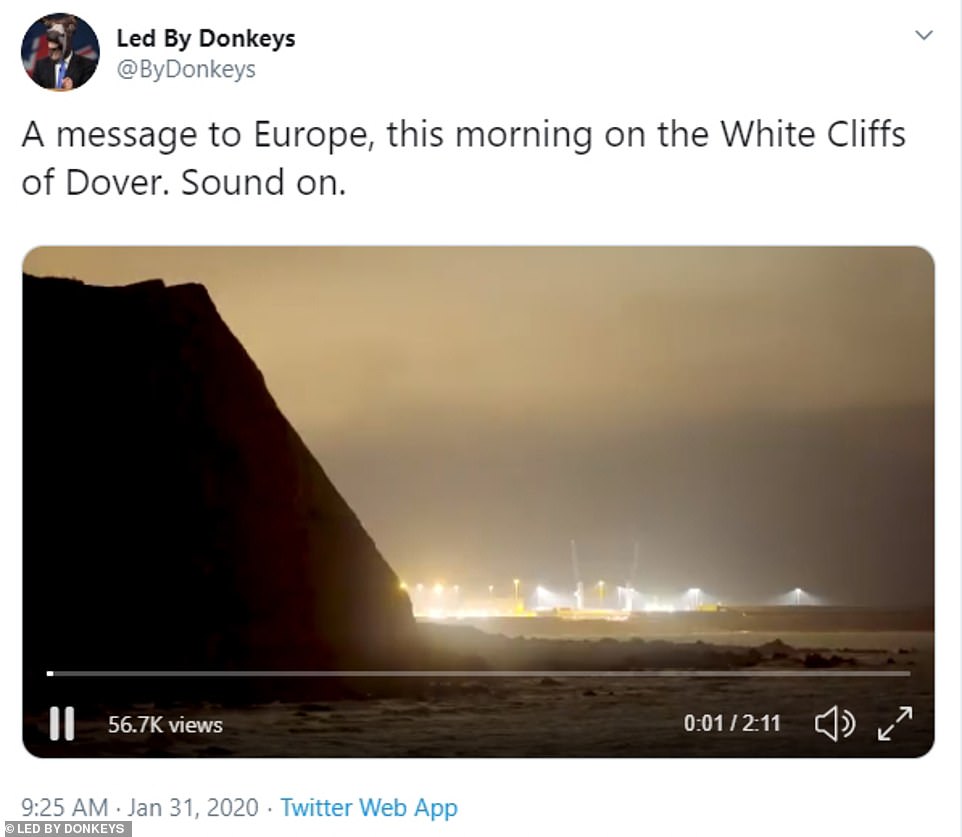 How did Led By Donkeys project a video onto the White Cliffs of Dover?

The video was the brainchild of Led By Donkeys, a group of four activist fathers famed for their giant billboards of politicians’ tweets.

The broadcast is thought to have measured 32,000 sq ft (3,000 sq m) and been projected onto the White Cliffs from a boat in the English Channel.

Writing about the technology in the book Led by Donkeys, the team reveal: ‘We chat to a friend of ours who projects messages onto buildings. He tells us he’s just picked up some new kit, more powerful than anything he’s used before. It projects as much light as a high-powered stadium floodlight, so should make for an incredible image.’

The group have previous projected other messages onto the cliffs, including a huge ‘SOS’ message last April calling for a Brexit extension and a confirmation vote.

The name of the organisation refers to the phrase ‘lions led by donkeys’ about British soldiers in the First World War being sent to their deaths by their superiors.

‘There seems no better choice of people for the nation that we are than Steve and Sid’.

The pro-Remain activists, founded by four friends Mr Stewart, James Sadri, Oliver Knowles and Will Rose, have crowdfunded tens of thousands of pounds from Remain supporters to ‘vent their frustration’ about leaving the EU.

The majority of the Led by Donkeys cash was spent erecting billboards featuring the quotes of Brexiteers such as Nigel Farage, Jacob Rees-Mogg and Michael Gove.

The group also projected Boris Johnson depicted as ‘criminal’ holding a ‘liar’ sign on to the Houses of Parliament last June and has now turned its attention to the White Cliffs of Dover as Brexit becomes a reality this evening.

But the controversial group was also accused of trying to interfere with last year’s EU elections with big spending on advertising during the campaign.

One billboard about claims Boris Johnson said ‘f*** business’ in relation to leaving the EU caused upset in Birmingham because it was put up near a school.

How Sidney Daw was scouted as a sniper and fought in France, Holland, Belgium and Germany

Sidney Daw, from Cardiff, fought in France, Holland, Belgium and Germany during the Second World War.

The 95-year-old, whose father died when he was 11, grew up in South Wales fearful of the prospect of war, especially over the rise of the Nazis in Germany.

His brother-in-law’s stepfather was killed on a boat in an attack on Cardiff Docks which suffered heavy shelling with more than 300 bombs dropped on the area.

After signing up for the war effort, Mr Daw was spotted as an excellent shooter on the firing range at Fort George in Scotland and joined a sniper section.

Speaking previously about his views on the EU, he has said: ‘My main reason for everything is keeping Europe together for peace in the world.

‘If we’re going to separate each other, you’re going to end up in trouble. Why would you want to leave?’

How Brigadier Stephen Goodall was awarded the Military Cross for bravery

Brigadier Stephen Goodall served in the Army for 32 years and was awarded the Military Cross for his efforts in the Second World War.

The 97-year-old, who lives in Devon, served in India and Burma and was given the honour in 1945 for bravery in the crossing of the Irrawaddy River.

He was nearly killed behind enemy lines during the Burma Campaign when a bullet was deflected off his watch that he had been given as 21st birthday present.

Following the war Mr Goodall stayed on in the military and served for 31 years with the Royal Engineers which included tours to Malaya, Germany and the US.

Brigadier Goodall had been studying mining engineering at the University of Birmingham when he volunteered to join the Royal Engineers in 1942.

However he never completed the course and was awarded a ‘degree in absentia’ in 1944, before he was finally awarded his certificate in December 2018.

After leaving the Army he helped run the Wildfowl and Wetlands Trust at Slimbridge, Gloucestershire, and has been an ardent Remain campaigner in recent years.