There have been mixed reactions in Europe’s newspapers to the UK’s withdrawal from the European Union last night.

On the stroke of 11pm on Friday, the UK officially divorced from the bloc after three years of bitter political struggle that split families and paralysed Westminster. 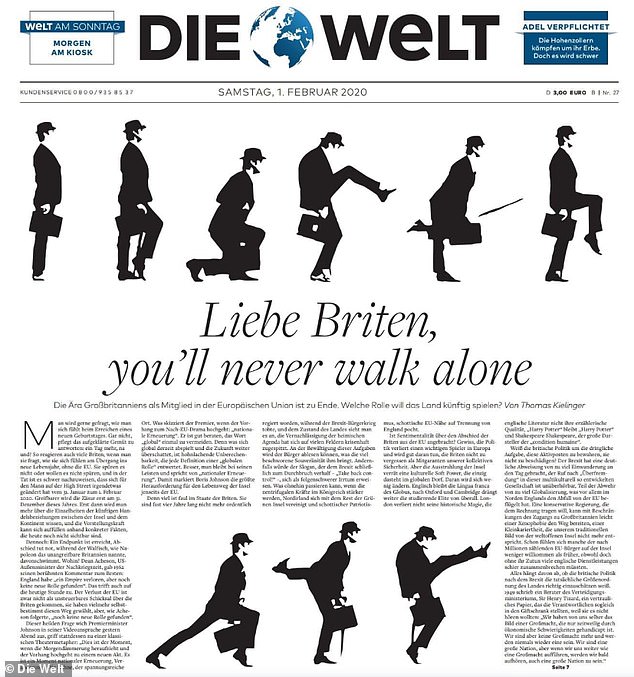 There have been mixed reactions in Europe’s newspapers to the UK’s withdrawal from the European Union last night. Pictured: Germany’s Die Welt used a graphic of John Cleese’s famous Ministry of Silly Walks sketch to acknowledge Britain’s departure 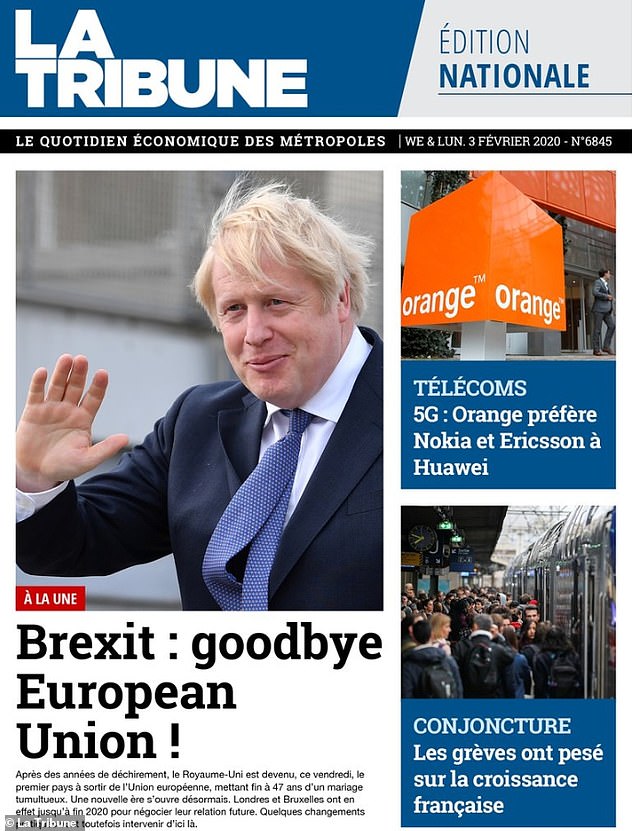 They added that Brexit would weaken the whole union.

The Irish Times’s cutting headline said that Britain was leaving the EU ‘not with a bang, but a whimper’.

And in Italy, La Repubblica asks whether the ‘schism’ of Brexit signals a ‘nightmare’, while Dubai’s Khaleej Times shows a chain being snapped either side of the words ‘New dawn’. 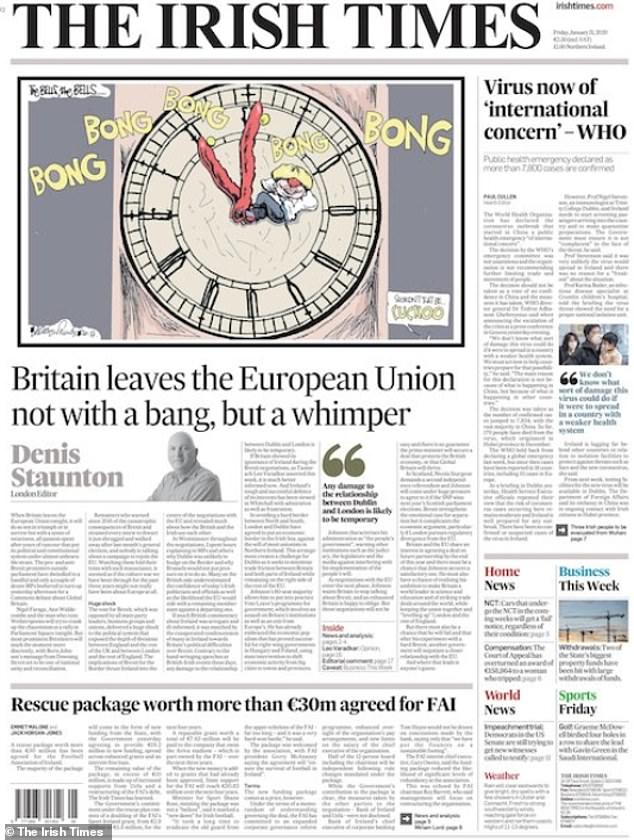 The Irish Times’s cutting headline said that Britain was leaving the EU ‘not with a bang, but a whimper’ 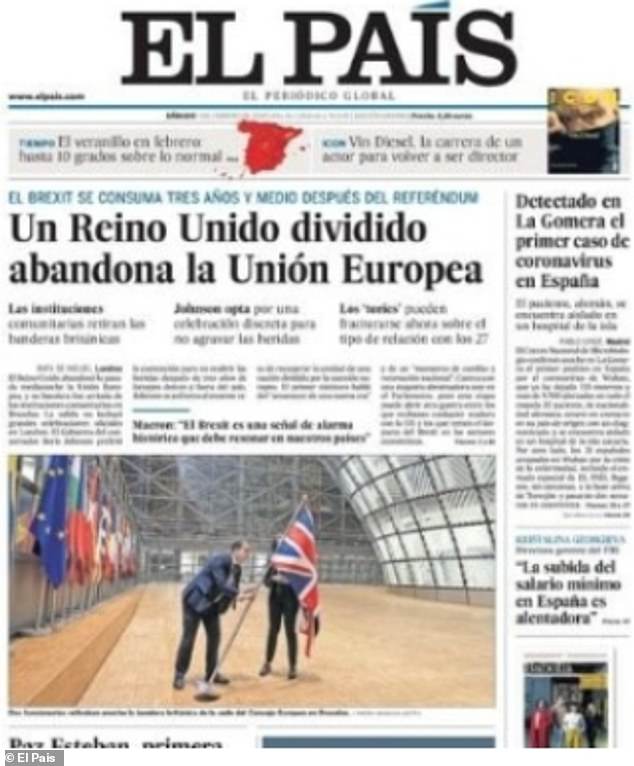 Back in France, Calais’ own local newspaper, in the town which has been one of the focal points for those concerned about trade and movement of goods, played down concerns about alterations or disruption.

Nord Littoral noted on its front page that ‘it’s today that the United Kingdom officially quits the European Union’ but the headline stated: ‘Brexit: the change is not now.’

The regional paper for the northern region led with the ‘divorce’, and also carried a large image of the town’s port, which a large proportion of British and European freight passes through.

The sentiment was echoed in national paper Aujourd’hui, one of the country’s most popular dailies.

It bid farewell with the headline ‘Bye Bye’, alongside a man draped in a Union flag. 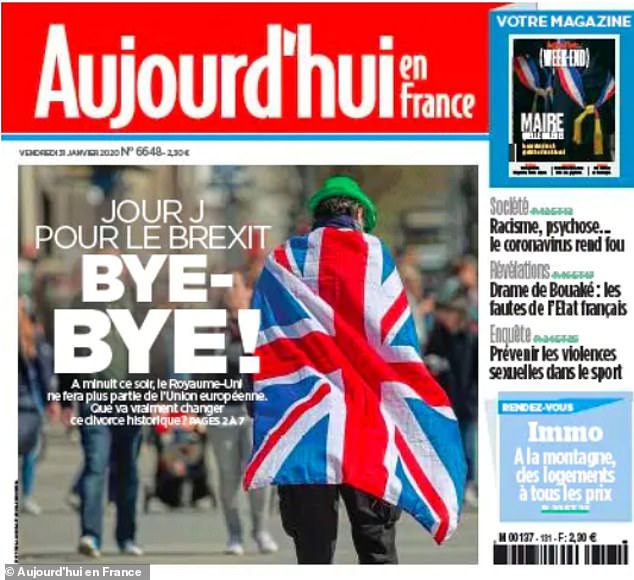 Aujourd’hui, one of France’s most popular dailies, bid farewell with the headline ‘Bye Bye’, alongside a man draped in a Union flag 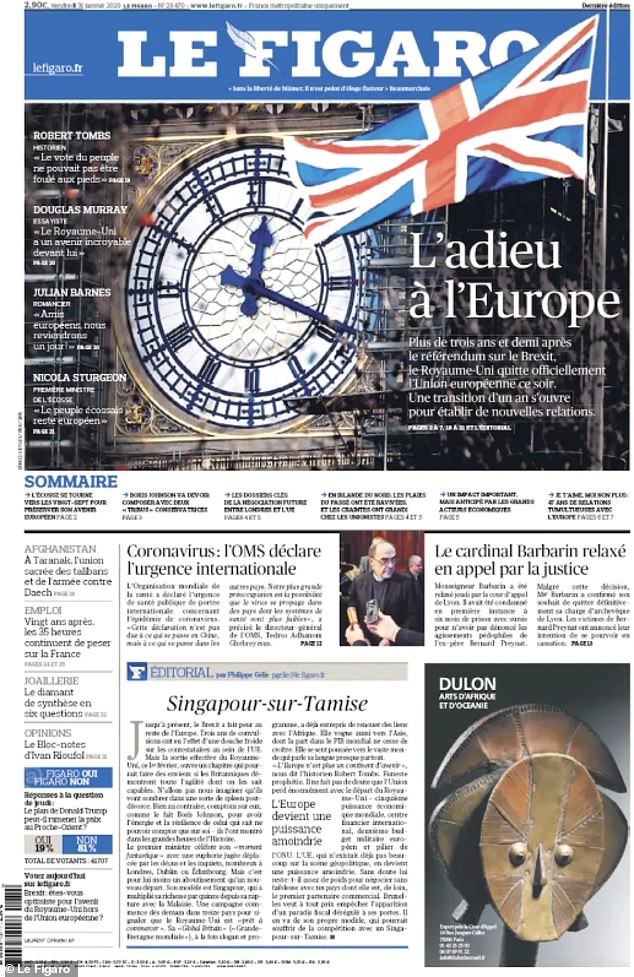 France’s Le Figaro wrote ‘Farewell to Europe’ on their front page, alongside a close-up shot of Big Ben

However, it also asked: ‘What will this historic divorce really change?’

Les Echos also paid tribute to ‘Europe without them’, but proposed that the ‘heavy consequences’ of Britain quitting could help Europe ‘bounce back’.

In Brussels, the absence of a mention of Britain in front pages was notable, with only Le Soir referring to the EU’s ‘new chapter’ after 27 years.

Britain’s exit from the bloc prompted jubilant Brexiteers to heraldthe moment with celebrations across the country, including a flagship bash in London’s Parliament Square headlined by Nigel Farage.

Britain’s last moments inside the EU were ticked off in a light show projected on to the famous black door of Downing Street, where Boris Johnson held a muted party for his staff after releasing a pre-recorded address to the nation.

The Prime Minister hailed the ‘moment of hope, a moment many people thought would never come’ and said Brexit would ‘unleash’ the UK’s potential – but warned there will be more ‘bumps in the road’.

Many Remainers are still deeply uneasy about severing ties with the bloc and are cautioning that the Brexit saga is not yet concluded.

Britain has now entered an 11-month transition period with the EU, during which time the government will race to strike a trade deal before December. 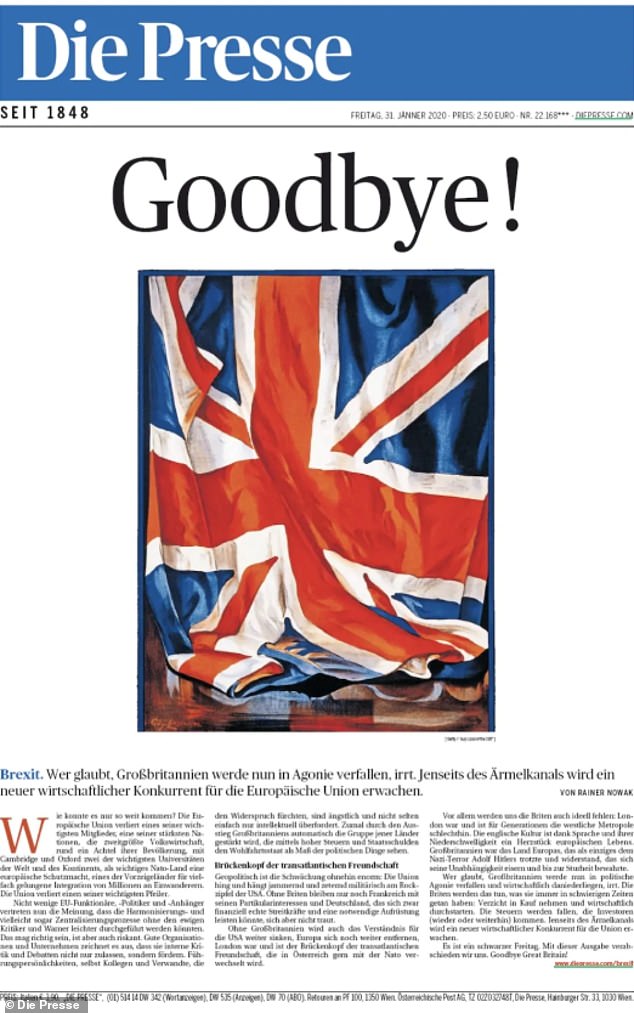 Austria’s Die Presse simply had a painting of a draped Union Jack with ‘Goodbye!’ written above it 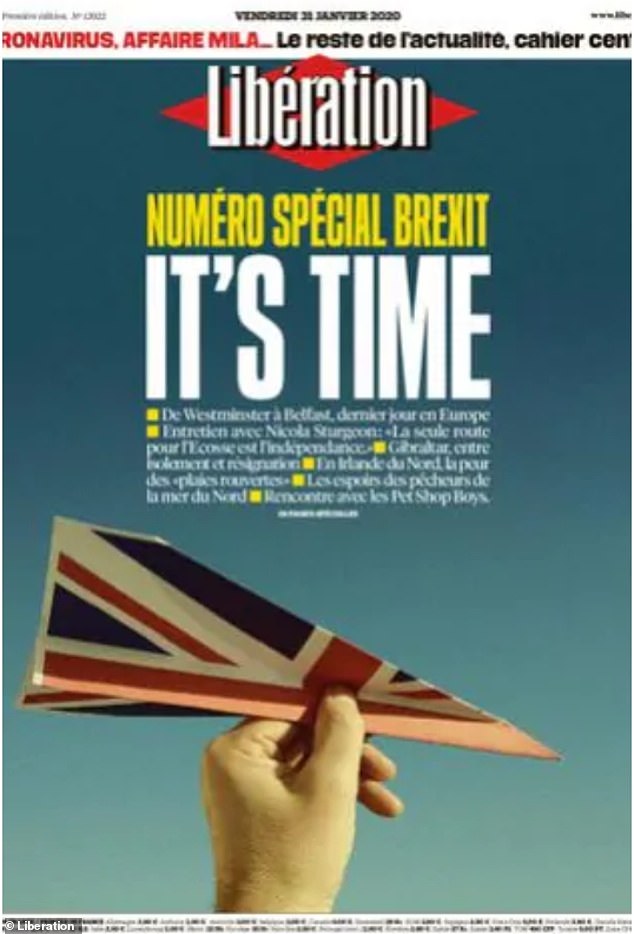 Any future wrangling with Brussels was far from the minds of revellers last night however.

Party-goers waved Union Jacks and cheered triumphantly following victory speeches by key architects of Brexit including Mr Farage, who is no longer an MEP after being a disruptive force in the European Parliament for over 20 years.

The Brexit Party leader said on Friday: ‘There is one thing above all we must celebrate tonight and it is this. The reason we are here tonight is because Westminster became detached from the people in this country.

‘The people have beaten the establishment. The real winner tonight is democracy. And I am someone who believes we should be pro-Europe, but not the European Union.’

Choruses of God Save The Queen and The Land of Hope And Glory swung round Parliament Square, and were echoed in similar parties up and down the UK.