The first event that will help decide the candidates for US president is to take place with Monday’s Iowa caucuses.

Democratic and Republican voters will choose their preferred nominees for the White House race.

While victory in Iowa doesn’t guarantee anyone the nomination, it can help give them crucial momentum.

The path appears clear for Donald Trump to be the Republican nominee, but there are still 11 people running for the Democratic nomination.

Many have spent the past few weeks vigorously campaigning in the Midwest state, which is always the first to vote. The primaries contest goes on until early June, and moves on to New Hampshire next Tuesday.

Here’s the story of what to expect in Iowa, broken down.

One person to watch

Polls suggest that Bernie Sanders has risen to be the favourite in Iowa (or – depending where you look – the joint-favourite, with former vice-president Joe Biden).

He is one of four senators running for president who have had to stay behind in Washington to attend Mr Trump’s impeachment trial, but his supporters, including Alexandria Ocasio-Cortez, have been energetically campaigning on his behalf in Iowa.

Four years after losing out to Hillary Clinton, could this be the 78-year-old’s time? He is backed by a huge pot of donations and a team of hundreds. But if he won the nomination, would moderate Democrats really rally around a candidate for the White House who identifies as a democratic socialist?

Some of the other big names including Elizabeth Warren, Amy Klobuchar and Pete Buttigieg will be hoping Mr Sanders doesn’t have it all his own way in Iowa.

There are also Republican caucuses on Monday, and two people are running against Mr Trump, but the president’s popularity within his own party is such that his nomination is all but a formality.

One piece of context

Iowa, to some extent, provides a glimpse of what went wrong for Democrats in 2016.

In the last election, more than 200 US counties flipped from supporting President Barack Obama in 2012 to backing Mr Trump – and 31 of those counties were in Iowa.

Democrats will be hoping to lure back those floating voters in 2020. And while we won’t know until November whether they have been successful, we may get a glimpse of where the land lies on Monday.

Howard County in northern Iowa flipped by 41 percentage points in 2016, the largest change in the US. The BBC’s Angélica Casas and Marianna Brady went there to ask people whether they would vote for a Democrat in 2020.

Does Iowa actually matter? It depends how you look at it.

As the primary season curtain-raiser, Iowa can help shape perceptions among voters. A win here can help give a candidate momentum early in the race (as it did in 1976 with Jimmy Carter) and erase any doubts about their viability.

While Iowans have a good record at picking the eventual Democratic nominee, their record when it comes to the Republican candidate is more mixed. When it’s an open Republican race (unlike this year, for example), none of the winners of Iowa has become the Republican nominee since 2000.

It’s worth pointing out that Iowa isn’t the most diverse of states either – the rest of America will vote very differently in upcoming primaries and caucuses. 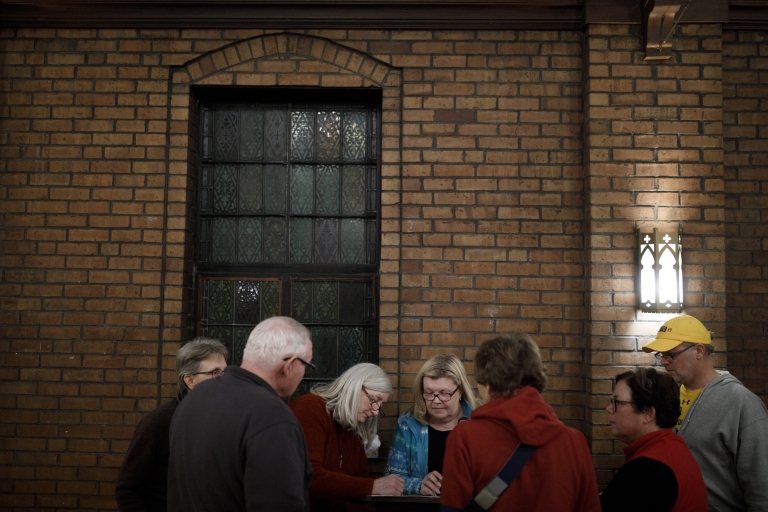 So says Ann Anhalt, from Des Moines, who plans to vote for tech entrepreneur Andrew Yang on Monday. But this is exactly what a caucus involves – they are essentially internal party meetings, scattered across the state, that might last a few hours.

At some point during the meeting, you have to show your support for a candidate. You do this by standing next to others who also support that candidate, and a count takes place.

What’s at stake is delegates – 41 Democratic ones in Iowa – distributed according to how well candidates performed in the caucuses. If candidate A is awarded 10 delegates, those delegates would later vote for candidate A as the Democratic nominee at the summer convention – the aim for any candidate is to gain as many delegates as possible over the primary season.

We need a strong leader to emerge as the Democratic nominee. Someone with great passion and energy who can unify the United States.

The division and hate messages that we’ve seen under the Trump presidency needs to end. We don’t currently have a leader that works for all Americans.

I’m caucusing so that future generations can access quality education. We need a president who helps “at risk” youth get the proper services they need so they don’t fall victim to the school-to-prison pipeline.

One thing to look out for

At each of the 1,677 locations across the state, a candidate must have the support of at least 15% of voters in order to qualify for a chance to win Iowa delegates to the national convention in July – when the candidate is ultimately picked.

After a first round of tabulations, those who support a candidate that doesn’t reach “viability” have the opportunity to switch sides.

Complicating everything is the new reporting system the Democratic Party has instituted for the Iowa caucus results.

In the past, the party has only released one number – the final tabulation of support after all the caucus horse-trading and support swapping takes place. This time, however, there will be two sets of numbers – the final tally as well as a count of each candidate’s support in the first round of balloting.

That means two – or more! – candidates could be on stage declaring victory on Monday night.

It has the makings for a long, chaotic night – the first of what could be many for the candidates still standing after the Iowa dust settles.