Boris Johnson today brutally slapped down Michel Barnier after the EU negotiator demanded Britain signs up to EU rules to get a trade deal.

The PM insisted there is no need to tie the UK to Brussels regulations, or vice versa, as he condemned growing protectionism around the world.

Arguing that he wants to be a champion of free trade now Brexit has happened, Mr Johnson dismissed claims that Britain will undercut social and environmental standards – saying it was often ahead of the bloc.

The defiant stance – in a 30-minute speech in which the premier notably declined to use the word ‘Brexit’ – came minutes after Mr Barnier warned that Britain will only get a ‘best in class’ trade deal if it bows to demands on a ‘level playing field’ and access to fishing waters.

He said the bloc was ready to strike an ‘ambitious’ package with the UK, including zero tariffs and quotas and covering the crucial services sector.

But he insisted that would be ‘conditional’ on Britain committing to keep the current social and environmental standards – as well as letting the European fishing fleet in.

The two sides are on a collision course again, with Mr Johnson vowing he will never accept Brussels regulations as the price for a trade deal. 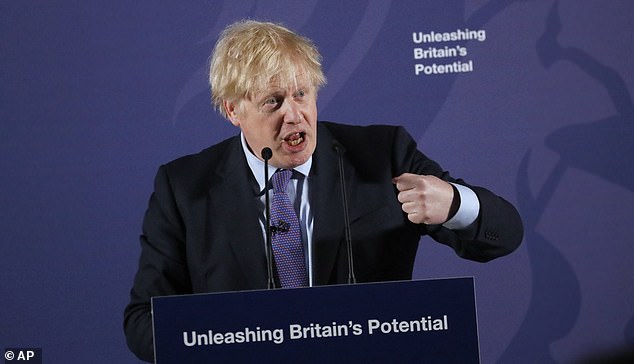 Boris Johnson (pictured in Greenwich today) called for a zero-tariff, zero-quota arrangement – but dismissed demands from the EU to align with their rules to get the package 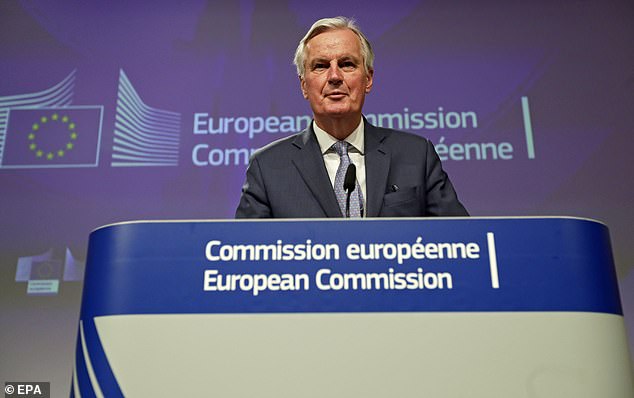 EU chief negotiator Michel Barnier said the bloc is ready to strike an ‘ambitious’ package with the UK, including zero tariffs and quotas and covering the crucial services sector

The PM signalled a tough approach in a keynote speech urging European leaders to honour their pledge to give the UK a Canada-style package.

But Mr Johnson warned that the EU must not demand alignment with its rules – making clear if it does he will simply walk away from the table.

Canada or Australia? The two options in poost-Brexit trade talks

The Comprehensive Economic and Trade Agreement (CETA) between Canada and the EU was signed in October 2016.

It meant 98 per cent of goods traded are exempt from tariffs – although there are still regulatory barriers and the system is being phased in.

Companies in based in both jurisdictions can compete for public contracts.

There are protections for products from specific geographical locations, such as Parma ham.

But there is little coverage of services, aside from respecting intellectual property.

The EU and Australia do not have a formal trade deal – although one is being negotiated.

Instead the two interact based on World Trade Organisation terms.

That means tariffs apply on many goods, with ad hoc agreements in specific areas.

The clash comes on the first working day after Brexit finally happened on Friday night, sets the stage for months of brutal haggling over the shape of the future relationship.

In another pressure tactic, there are claims that Mr Barnier has also agreed to Spain’s call to get a veto over whether Gibraltar should be covered by the arrangements – something that Britain has insisted will not be agreed.

Irish PM Leo Varadkar has also been turning up the rhetoric, after branding the UK a ‘small country’ and gloating that the EU has a stronger hand in the talks.

At a press conference in Brussels, Mr Barnier spelled out the EU’s stance as skirmishing gets under way.

He said a ‘best in class’ trade deal could include zero tariffs and zero quotas on goods, and cover the services sector.

‘We are ready to offer all this, even though we know there will be strong competition between the UK, our immediate neighbour, and the EU in the future,’ he said.

‘First, we need to make sure that competition is and remains open and fair. We have already agreed with PMB that our future partnership will prevent, and I quite ‘’unfair competitive advantages’’.

‘We must now agree on specific and effective guarantees to ensure a level playing field over the long term.

‘That means a mechanism to uphold the high standards we have on social, environmental, climate, tax and state aid matters today and in their future developments. 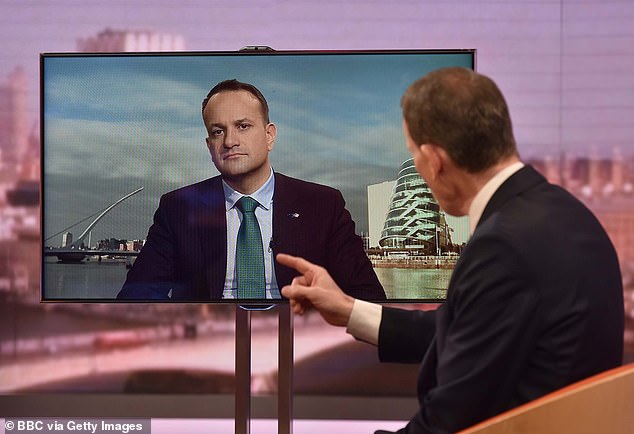 Leo Varadkar, the Irish Taoiseach, yesterday insisted the extra protections were needed as the UK is geographically closer to the EU than Canada and does a much larger volume of trade

‘Second, out free trade agreement must include an agreement on fisheries. This agreement should provide for continued reciprocal access to markets and waters with stable quota shares.

‘If we can agree on this, as well as robust agreements towards a level playing field, and the necessary enforcement mechanism, we will achieve a very ambitious free and fair trade agreement.’

Boris Johnson today slammed ‘mumbo-jumbo’ fears about US food standards and NHS interference – as he insisted Britain will be the superhero of free trade.

The PM shrugged off ‘hysteria’ over issues like chlorinated chicken, joking that he thought Americans looked ‘pretty well nourished’.

He said Britain’s approach would be based on ‘science’, although he stressed that other countries will have to accept that the UK will not slash standards or compromise animal welfare.

The comments came as Mr Johnson delivered a keynote speech pledging to make the country a beacon for free trade now it has left the EU.

Hailing Britain’s proud history of pushing for more competition, he said it would emerge with ‘cape flowing’ to fight those who were ‘letting the air out of the tyres’ of the global economy.

However, Mr Johnson argued no other country which has a trade deal with the EU has been forced to sign up to such obligations.

In a speech to business leaders and ambassadors in Greenwich, he said: ‘There is no need for a free trade agreement to involve accepting EU rules on competition policy, subsidies, social protection, the environment or anything similar, any more than the EU should be obliged to accept UK rules.

‘The UK will maintain the highest standards in these areas – better, in many respects, than those of the EU – without the compulsion of a treaty and it is vital to stress this now.’

He said: ‘We have often been told that we must choose between full access to the EU market, along with accepting its rules and courts on the Norway model, or an ambitious free trade agreement, which opens up markets and avoids the full panoply of EU regulation, on the example of Canada. We have made our choice: we want a free trade agreement, similar to Canada’s.’

In the ‘very unlikely event’ that talks do not succeed, Mr Johnson will say in his speech he will seek a much looser arrangement. ‘The choice is emphatically not ‘deal or no deal’.

The question is whether we agree a trading relationship with the EU comparable to Canada’s – or more like Australia’s,’ he will insist. ‘In either case, I have no doubt that Britain will prosper.’

Mr Johnson will say ‘our new relationship with our closest neighbours will range far beyond trade’. ‘We will seek a pragmatic agreement on security, protecting our citizens without trespassing on the autonomy of our respective legal systems,’ he will announce.

Mr Varadkar yesterday insisted the extra protections were needed as the UK is geographically closer to the EU than Canada and does a much larger volume of trade.

He told the BBC’s Andrew Marr show yesterday: ‘You’re geographically part of the European continent, we share seas, we share airspace and our economies are very integrated. 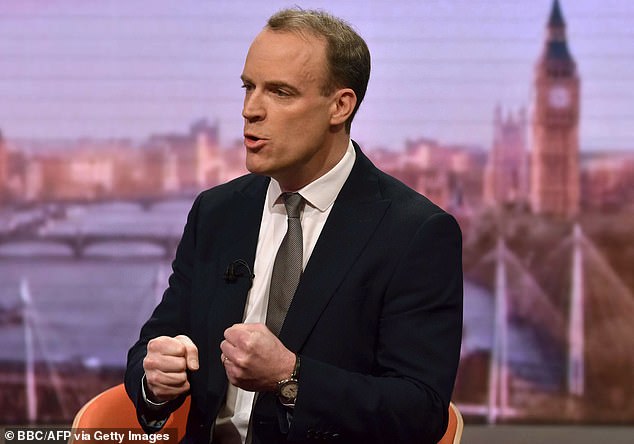 ‘One thing that we feel very strongly in the European Union is that if we’re going to have tariff-free, quota-free trade with the UK… then that needs to come with a level playing field. We would have very strong views on fair competition and state aid.’

But Foreign Secretary Dominic Raab said any suggestion the UK will have to follow EU rules and laws after 2021 ‘just ain’t happening’. He told Marr that staying tied to EU regulations ‘obviously defeats the point of Brexit’.

Mr Johnson has vowed to negotiate a trade deal with the EU by the end of this year so there is no need to extend the transition period beyond December.

Some EU figures have questioned whether the fast-track timetable is realistic, but former European Council president Donald Tusk yesterday said he believed it would be possible. He told Marr: ‘One year is enough to finalise our negotiations.’

Give Brussels fishing rights for 25 years? Codswallop! Britain to reject EU demands for deal that would allow foreign trawlers access to our waters until 2045

Britain is to reject EU demands for a deal on fishing that would give foreign trawlers access to our waters for 25 years.

Instead, France and other European nations will have to request access annually, with quotas negotiated each year.

The UK has some of the richest fishing grounds in the world, but British vessels land less than a third – 32 per cent – of the total catch. EU boats take 43 per cent, while the Norwegians catch 21 per cent.

At the end of the transition period in December, the country will leave the EU’s Common Fisheries Policy, which dictates how much British trawlers can catch and where. Fishermen complain they do not get a fair share of what is caught in UK waters.

The Fisheries Bill going through Parliament will end the automatic right of EU vessels to fish in British waters, with access to fisheries set to be a matter for the UK to negotiate.

Ministers see Norway as a model. It holds annual negotiations with the EU on access to waters, management of shared stocks and exchanges of quota rights. The political declaration on future relations agreed by Boris Johnson and EU leaders last year states fishing rights must be ratified by July.