Hong Kong will close nearly all crossings with China to prevent coronavirus outbreak after 2,400 medical workers went on strike to demand border closures

By Reuters and Chris Dyer For Mailonline

Hong Kong will shut nearly all land and sea border crossings to mainland China in a bid to stem the spread of the deadly coronavirus that has already killed at least 360 people.

Carrie Lam, Hong Kong’s leader, announced the city will shut almost all border control points from midnight, but denied this was as a result of a medical workers strike.

The closure came after hundreds of medical employees went on strike in the city today to demand the shutting of the border and to call for pressure on the stretched health sector be eased.

Lam said in a briefing today that only two border checkpoints – at Shenzhen Bay and the bridge to Macau and Zhuhai – will remain open.

She denied the move was due to pressure from the protesters, who threatened a five-day demonstration to demand all borders to the mainland are closed.

The Hospital Authority Employees Alliance (HAEA), which has about 18,000 members, said 2,400 workers took part in the strike, despite calls by the government for medical workers not to. 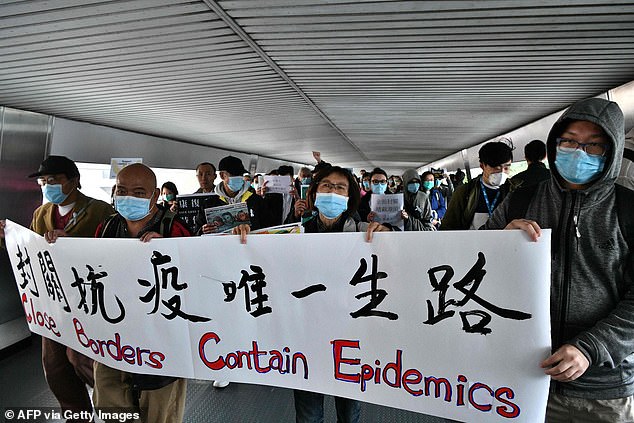 Lam said the announcement had ‘absolutely nothing to do with the strike’ and was instead simply a measure to stem the spread of the virus.

She urged Hong Kong residents to ‘stand united’ in combating the outbreak, which has killed more than 360 people, all but one in China.

Hong Kong has 15 confirmed cases of the new coronavirus, which emerged in central China in December and has killed more than 360 people there and sent jitters through global markets.

The demands are for the government to close the border with the mainland, facilitate the distribution of masks to the public, ensure that front-line medical workers have adequate supplies and protection, provide enough isolation wards for patients, and guarantee no reprisals for striking medical staff.

Medical worker Tracy Pui, who queued up with colleagues to sign a petition in support of the HAEA, said: ‘[We] hope that these strikes will make the government respond to our five demands, most importantly to stop the spread of the coronavirus in Hong Kong.’

About 100 people rallied in the heart of Hong Kong’s financial district in support of the health workers’ union, with some holding banners saying: ‘Close Borders, Contain Epidemics.’

The scare over the virus comes after months of anti-government protests in Hong Kong, triggered by what many residents see as unnecessary interference by Beijing in city affairs. 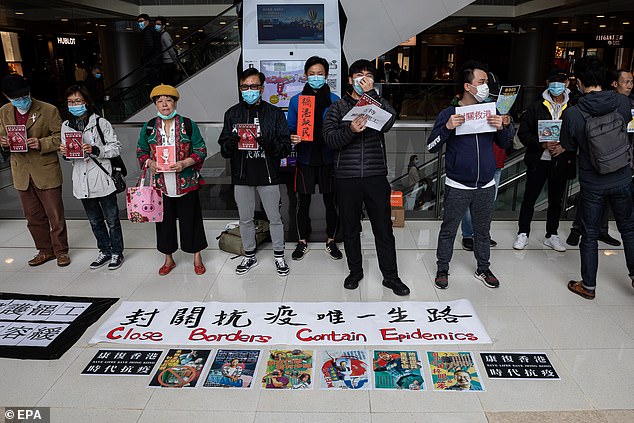 Hong Kong leader Carrie Lam has suspended high-speed rail services to the mainland and cross-border ferries, but she has stopped short of closing the entire border, saying it would be ‘inappropriate and impractical’.

Panic-stricken residents have emptied shelves in major supermarkets in Hong Kong, stockpiling meat, rice and cleaning products as fears escalate over the coronavirus.

About 90 percent of the city’s food is imported, with the bulk coming from the mainland, according to official data.

The coronavirus is expected to pile pressure on the city’s economy, which sank into recession in the third quarter as the often violent protests scared away tourists and took a heavy toll on retailers.

‘They’ve started rushing to buy supplies even before they fully close the borders,’ Lam said.

‘It’ll get worse if it is fully closed. Especially food, people have been rushing to buy oil, salt and rice, not to mention the face masks.’