By Bhvishya Patel and Phoebe Eckersley For Mailonline

Dozens of residents gathered outside a block of flats saying ‘thank you’ in a variety of European languages after a ‘Happy Brexit Day’ poster was put up in their tower block demanding they ‘only speak English’.

The racist notice told tenants that ‘Queen’s English’ is ‘the spoken tongue here’ at Winchester Tower flats in Norwich.

Demonstrators from Stand Up To Racism joined up with locals to give a ‘crystal clear message’ to the poster’s author at around 2.25pm today, Dave Hannant wrote on Twitter. 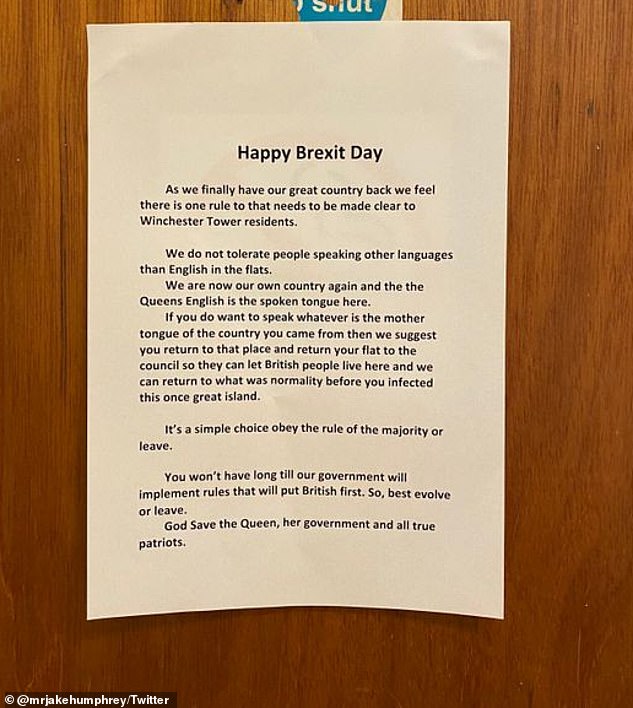 Signs telling residents ‘we are now our own country again’ have reportedly been seen by residents inside the Winchester Tower in Norwich. Around 50 people gathered outside the tower block of flats to offer their support to give a ‘crystal clear message’ of support to European friends, Dave Hannant wrote on Twitter

Hugh Stanners, of Norwich’s branch of Stand Up To Racism, said: ‘It is a really nasty racist poster, obvious from someone who is far right or fascist, because it talks about infecting our once great island.’

The posters, which were noticed by residents at the tower in Norwich were stuck in the communal areas of the building, The Huffington Post reported.

Today Norfolk Police confirmed that officers attended the block of flats last night and the posters kept by the residents had been seized for forensic enquiries.

The message was first spotted by one anonymous resident on Friday morning who then reported it to the council as a hate crime.

The resident told The Huffington Post: ‘It’s scary knowing that people feel emboldened to say this kind of thing openly, knowing it’s going it’s going to be seen by some of the European residents who live here.

The message, which has since been shared on social media, read: ‘As we finally have our great country back we feel there is one rule to that needs to be made clear to Winchester Tower residents.

‘We do not tolerate people speaking other languages than English in the flats.

‘We are now our own country again and the Queen’s English is the spoken tongue here.

‘If you do want to speak whatever is the mother tongue of the country you came from then we suggest you return to that place and return your flat to the council so they can let British people live here and we can return to what was normality before you infected this once great island.

‘It’s a simple choice obey the rule of the majority or leave.

‘You won’t have long till our government will implement rules that will put British first. So best evolve or leave. God save the Queen, her government, and all true patriots.’

Today Norfolk Police confirmed they were investigating the incident and that no arrests had been made.

Norfolk’s chief of constabulary Simon Bailey said there is ‘no place in society for hatred and intolerance’ and ‘nobody should have to face intimidation because of who they are’.

He told the Eastern Daily Press: ‘It is more important than ever that we stand together in the face of hostility. We remain committed to helping people feel safe and secure as they go about their lives.’ 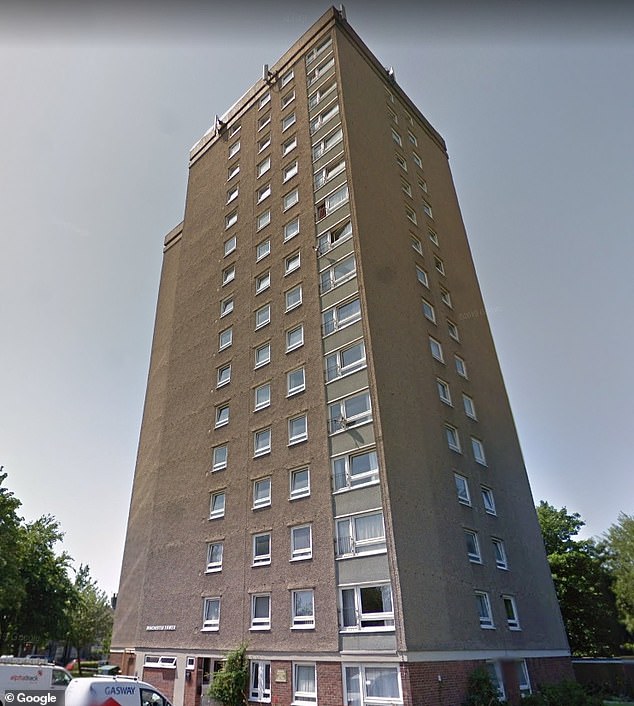 A Norfolk Police spokeswoman said: ‘We can confirm we are investigating this incident, which was initially reported yesterday (Saturday 1 February) at 5.40pm.

‘Officers attended Winchester Tower last night and all posters had been removed. Those posters kept by residents have since been seized for forensic enquiries and we will be working with the council to examine any available CCTV.

‘There is no place in society for hatred and intolerance. Nobody should have to face intimidation because of who they are and it is more important than ever that we stand together in the face of hostility. We remain committed to helping people feel safe and secure as they go about their lives.

‘The matter is being dealt with as a racially aggravated public order incident and anyone with information which could help officers with enquiries should contact Norfolk Police on 101 quoting crime reference 36/7964/20.’

The incident come just days after the United Kingdom stopped being a member of the European Union on January 31.