Latest News
Home /Fed up with fly-tippers acting with impunity, councils are fighting back

Whether it is dumping a mattress, dropping off a black bin bag or chucking away an old washing machine, these men and women have one thing in common – they know perfectly well that what they are doing is wrong.

Captured on CCTV, the footage makes that much very clear.

Heads furtively turning from side to side, first they scan the area to ensure that the coast is clear. Next, picking up pace, they approach their chosen spot.

Once there, the aim is to off-load their unwanted item as seamlessly as possible. If it’s a bulging rubbish sack, that is often achieved without even breaking their stride.

For bigger items – be that an old fridge or even a sofa – it’s a case of drag, drop and scarper.

Finally, mission accomplished, they head off on their way, visibly relieved and no doubt thinking that they have ‘got away with it’. Not any more.

Because, as hundreds of fly-tippers are discovering to their cost, communities around the country are now fighting ‘dirty’ when it comes to combating the scourge of so-called grime crimes.

With incidences of fly-tipping having increased across the country by more than 50 per cent in six years, a growing number of councils has decided to publicly identify those responsible for littering their streets.

The idea is to shame the perpetrators and in so doing discourage others from following suit.

Using CCTV cameras set up to target known fly-tipping hotspots, footage of the litter-bugs is captured and then uploaded on to council-run ‘wall of shame’ websites and on YouTube. 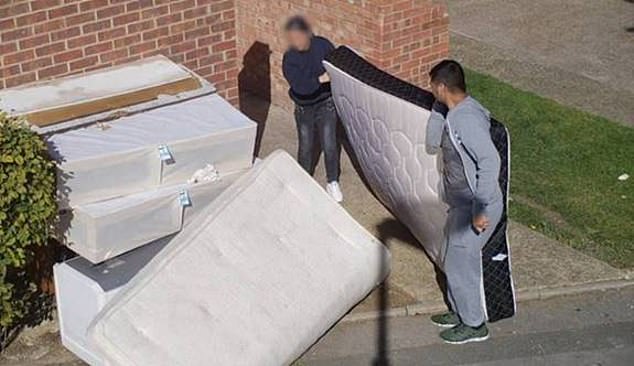 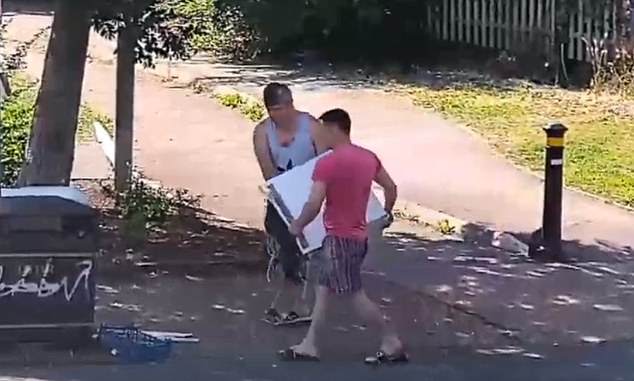 There members of the public are encouraged to view the footage and to identify the fly-tippers.

Once identified, the council will then intervene. Not only do the perpetrators have to deal with the humiliation of seeing their anti-social activities shared online but they will also be hit with a £400 fine. And early evidence suggests that the tactic is working.

The London borough of Barking and Dagenham is one of the councils that has taken the lead in the fly-tipping fightback.

Videos uploaded on to its website have been viewed hundreds of thousands of times with the result that 37 individual fly-tippers have been identified and fined.

Printed leaflets with photos of the offenders are also distributed to all households in the vicinity of the offence.

While that number may sound relatively small, the overall impact of the strategy has been much more far-reaching.

Because, in the year since the council introduced its wall of shame, the amount of rubbish fly-tipped in the borough has fallen by one quarter. 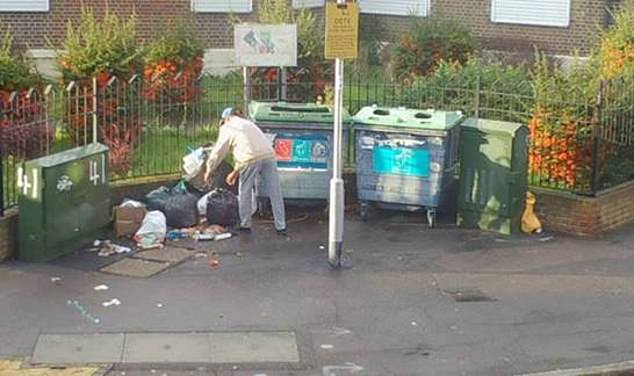 Caught on camera: Bin bags are tossed away in Barking and Dagenham. Using CCTV cameras set up to target known fly-tipping hotspots, footage of the litter-bugs is captured and then uploaded on to council-run ‘wall of shame’ websites and on YouTube 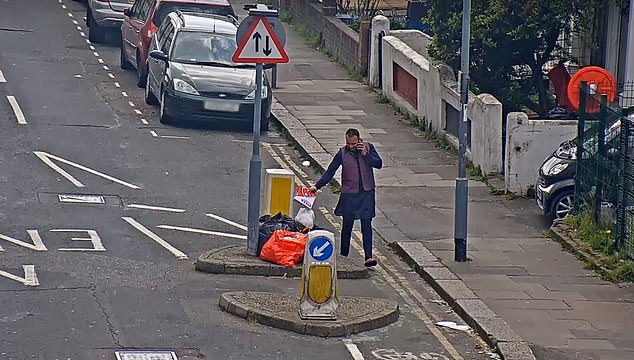 Other London boroughs to successfully set up their own walls of shame include Redbridge, where a man is seen discarding rubbish

‘What we are trying to do is say, ‘Look, if you are selfish and inconsiderate, expect us as the local authority to penalise you and embarrass you because this isn’t acceptable to the values of the community that we represent’,’ explains council leader Darren Rodwell.

‘And if you do this we will ask the rest of the community to tell us who you are and we will then find you on their behalf.’

In 21st century Britain such straight-talking will no doubt be welcomed by those who feel that all too often the rights of law-abiding citizens are trampled upon by a minority who have no respect for the communities in which they live.

‘Before we introduced this there was a lot of umming and ahhing about whether or not we could do this legally,’ says Mr Rodwell.

‘But if you don’t do anything wrong, you’ve got nothing to worry about because you don’t get blamed.

‘It’s about upholding old-fashioned values, like in the days when you used to make sure your front step was clean and your curtains were clean and your garden was kept tidy. 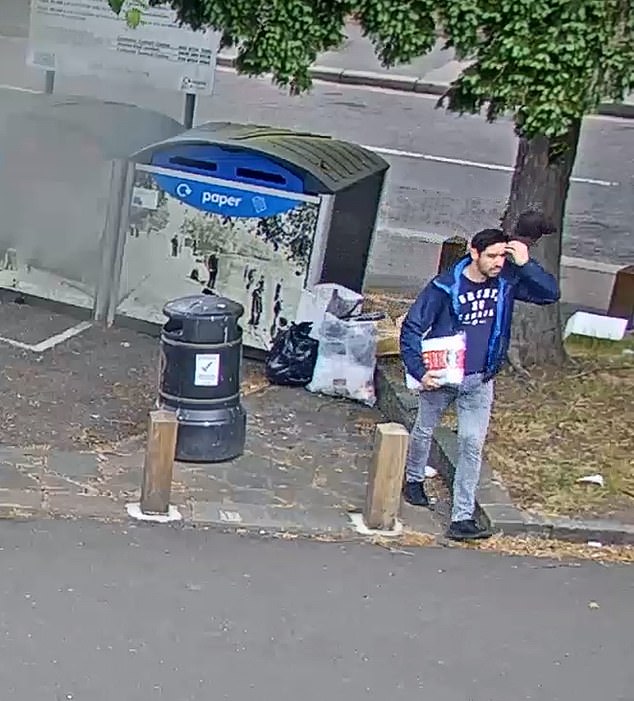 With incidences of fly-tipping having increased across the country by more than 50 per cent in six years, a growing number of councils has decided to publicly identify those responsible for littering their streets (man pictured littering in Redbridge) 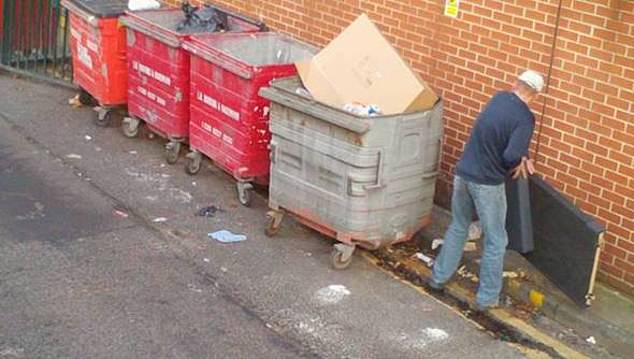 Back in Barking and Dagenham (where a man ditches some rubbish), a study of fly-tipping data found that streets with large numbers of rented houses are hardest hit, with items often being dumped when people are moving in and out of those properties

‘Those values of saying “actually I want to keep this place nice”. And we are seeing that it is starting to work.

‘Not only are people coming forward with names but they are telling us about other people who have been fly-tipping that we didn’t know about. It has been very, very successful.’

Among all the wall of shame tip-offs the council has received, two particularly unusual ones stand out.

One woman was hit with a £400 fine for dumping black sacks of rubbish after she was identified by her daughter – who was unhappy that her mother had previously grounded her.

Another was a husband who informed the council about his wife dumping a mattress.

‘I can’t say why he shopped his wife, but I imagine it was an interesting conversation,’ says Mr Rodwell.

Other London boroughs to successfully set up their own walls of shame include Redbridge and Haringey while in Luton and Hull the councils have taken a similar approach.

Many more are utilising CCTV footage to film fly-tippers but, rather than publicising images of wrong-doers online, attempt to identify them themselves.

In Wigan the deployment of technology more typically used to combat terrorism has seen fly-tipping fall by a third since 2013, bucking the national trend.

There they are using small, lightweight cameras that run off phone SIM cards and which can be easily fixed to lampposts, trees and buildings close to fly-tipping hot-spots. 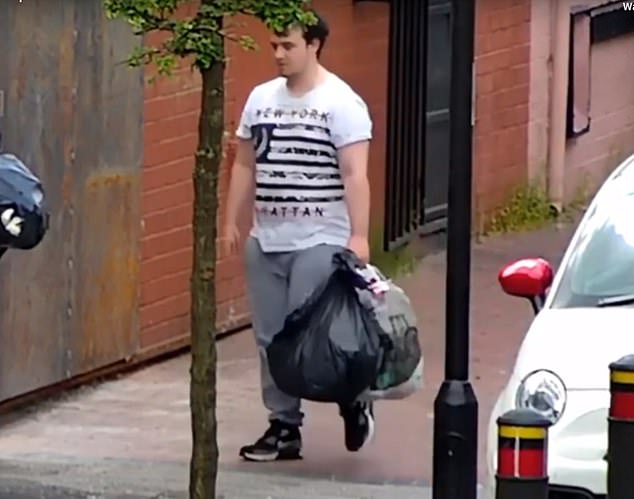 ‘It’s anti-terrorism technology so a lot of it is very covert, and some of these cameras have infra-red and night vision,’ said Paul Barton, director of environment at Wigan council.

‘We’re quite camera rich, with nearly 600 CCTV cameras and a dozen fast deployment cameras. It’s a big old arsenal compared to other authorities.’

Of course when it comes to keeping communities litter-free local councils are very much on the frontline.

Which is why they are a key part of this year’s Great British Spring Clean, which is run by Keep Britain Tidy and backed by the Daily Mail.

More than 200 councils are already on board to support the event, which takes place between Friday, March 20 and Monday, April 13, agreeing to supply or lend equipment and arrange for safe disposal and effective recycling of the rubbish collected.

Last year, an astonishing 563,163 volunteers pledged to help – the biggest ever mass-participation environmental campaign – clearing parks, beaches, streets and common land of the equivalent of 239,344 wheelie bins full of rubbish – nearly 20 per cent of which was plastic bottles which were recycled.

Back in Barking and Dagenham, a study of fly-tipping data found that streets with large numbers of rented houses are hardest hit, with items often being dumped when people are moving in and out of those properties. 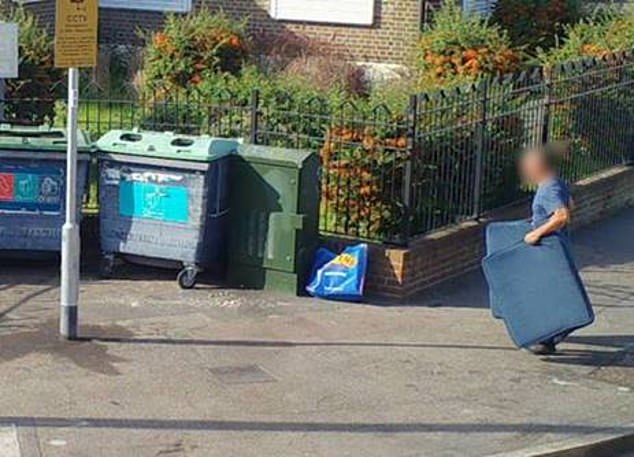 A man dumps two cushions in Barking and Dagenham, resulting in him being shamed by the council 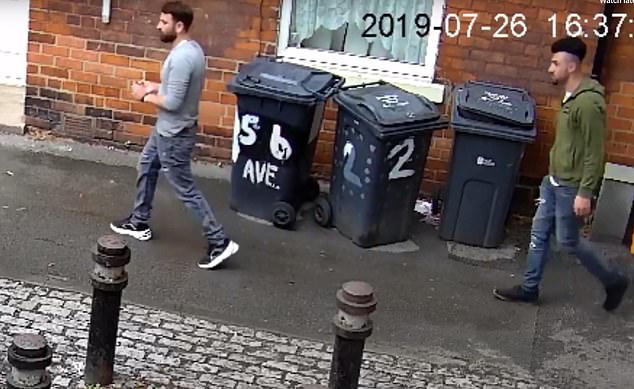 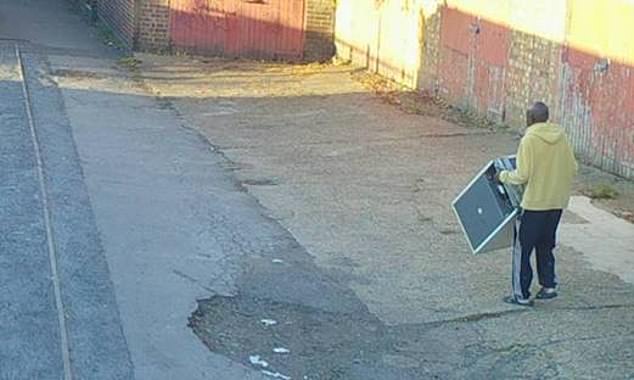 Many people have blamed the rise in fly-tipping nationally on the fact that many councils have introduced or increased charges for people taking items to the tip.

But in Barking and Dagenham there is no charge for dumping household goods such as mattresses and sofas if you take the items there yourself.

And, while it does charge to collect bulky items, the council has also recently teamed up with electrical retailer ao.com to introduce a free service for the collection of white goods such as fridges and washing machines.

The homeowner books a collection time and ao will pick up the item and recycle it. And yet these types of items are still often fly-tipped in the borough.

‘There are no excuses,’ says Mr Rodwell. ‘These people are lazy and inconsiderate.

‘We have two dumps in the borough where they can get rid of any rubbish they want to. At Christmas I had family round and took eight black bags of rubbish from presents and everything else and I just drove it down the dump.

‘I know not everyone has a car but usually they can facilitate it. People often say what about a poor, old lady – but to be fair it isn’t an old lady that is dumping the rubbish.’

Other moves that have helped improve the local environment include an ‘oven-ready’ injunction that allows the council to move on anyone camping illegally in the borough within two hours of their arrival.

‘You know what happens when people rock up with caravans and dumper trucks?’ says Mr Rodwell.

‘Well, we have got an injunction that kicks them out in two hours and that has saved us £1million in clean-up costs.’

The council has also tested what it calls a 21st century dog licence, whereby dogs are only allowed to use public parks if they have had a DNA swab.

This means that any dog mess left behind by owners can be tested by council wardens and traced back to the offending animal.

In the three parks where the scheme was tried out the amount of dog faeces reduced by more than half.

The council is now seeking government funds to extend the scheme across the borough.

Along with other councils, it is also calling for the Government to beef up the punishments that can be handed out to fly-tippers.

In the past six years just five per cent of court fines handed out in England topped £1,000 and only 16 per cent were above £500.

‘The job of local government is to be the bastion of the values of that community. So I think we need the right tools,’ adds Mr Rodwell.

‘And what we are trying to show and we are showing is that if we get the right tools we get the community to buy in.

‘Because all of us have a part to play in improving the environment that we live in.’

A message which, thanks to the wall of shame, local residents now ignore at their peril.