China complained to Boris Johnson‘s father about the Prime Minister’s response to the coronavirus outbreak, according to emails accidentally made public by Stanley Johnson himself.

The green campaigner and former reality star, 79,  met with the Chinese ambassador Liu Xiaoming earlier this week in a 90-minute meeting to discuss environmental issues.

He then proceeded to email environment minister Lord Goldsmith – to his personal email address – to inform him that the ambassador had expressed concerns that the PM had not sent a personal message of support to Beijing over the virus.

However, Mr Johnson had apparently accidentally copied in the BBC to the email exchange.

Downing Street said that Mr Johnson was a private citizen and was not acting for the Government in any official or unofficial capacity.

The use of private email accounts to discuss matters relating to government business is likely to spark security concerns. 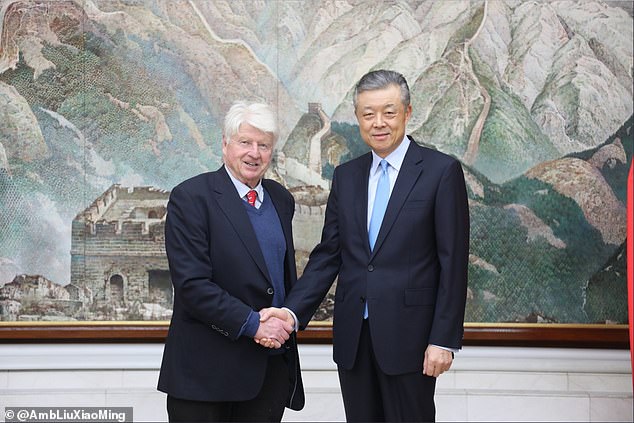 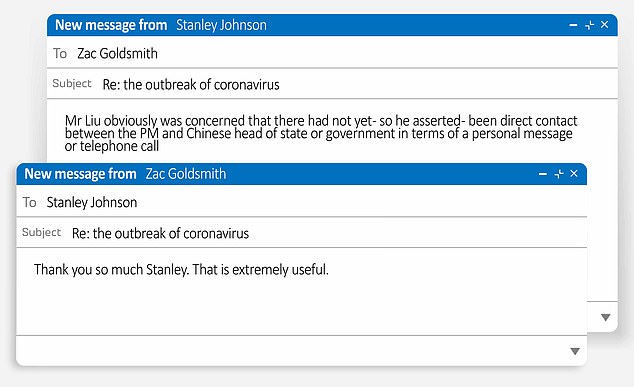 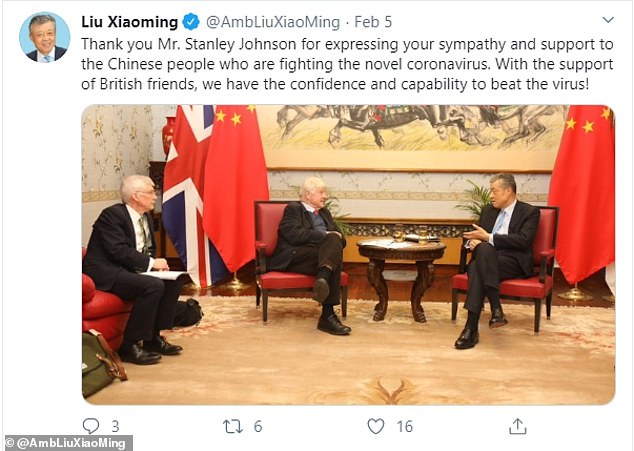 Mr Johnson reportedly wrote in the email: ‘Re the outbreak of coronavirus, Mr Liu obviously was concerned that there had not yet – so he asserted – been direct contact between the PM and Chinese head of state or government in terms of a personal message or telephone call.’

He also said he had raised the possibility of his son visiting China in October to attend an international conference on biodiversity, COP15, which will be held in Kunming.

Lord Goldsmith wrote a reply from his personal email address saying: ‘Thank you so much Stanley. That is extremely useful.’

Both men were seemingly oblivious to the fact that the BBC had also been sent the messages.

The government insisted it had been in ‘close contact with the Chinese authorities since the start of the outbreak’ of the coronavirus. 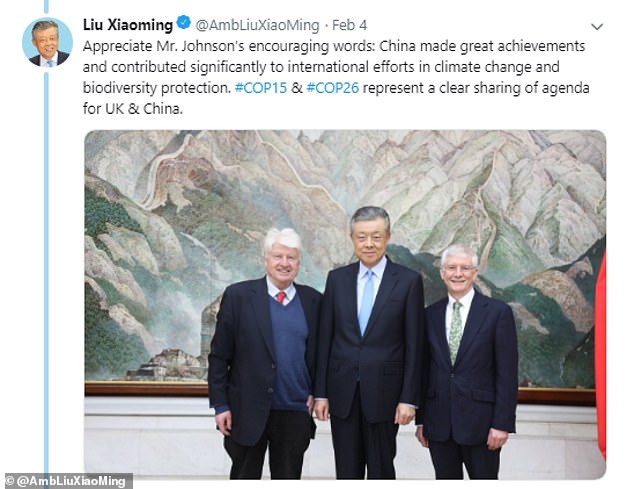 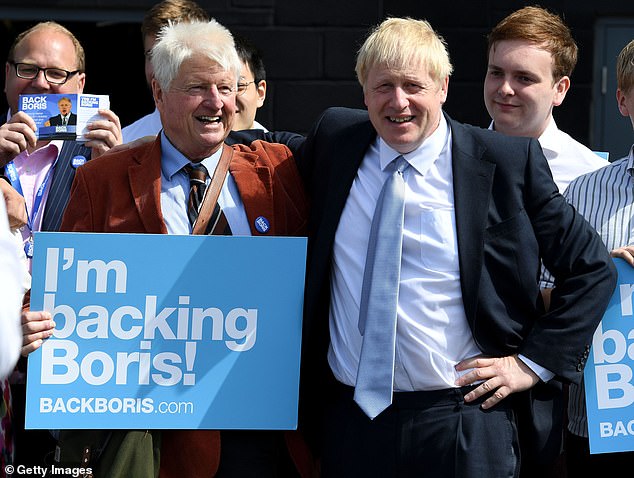 Mr Johnson, pictured with his son Boris in June last year, accidentally made public his account of the meeting with Mr Liu after emailing comments to Lord Goldsmith  and copying in the BBC

Stanley Johnson’s 90-minute meeting with the ambassador took place on Tuesday and was not official government business.

Mr Liu tweeted a picture of the meeting and said: ‘Thank you Mr. Stanley Johnson for expressing your sympathy and support to the Chinese people who are fighting the novel coronavirus.

‘With the support of British friends, we have the confidence and capability to beat the virus!’

China‘s ambassador to the UK today accused the British government of ‘over-reacting’ to the coronavirus outbreak as he suggested ministers had unnecessarily sparked public ‘panic’.

Liu Xiaoming criticised the government after earlier this week it suggested all 30,000 UK nationals in China should leave the country if they are able to.

Mr Liu said that while the UK had been helpful in official talks with Beijing he believed the country’s ‘words do not match with the deeds’.

He also appeared to confirm that Boris Johnson is yet to speak or send a message to Chinese premier Xi Jinping about the deadly epidemic. 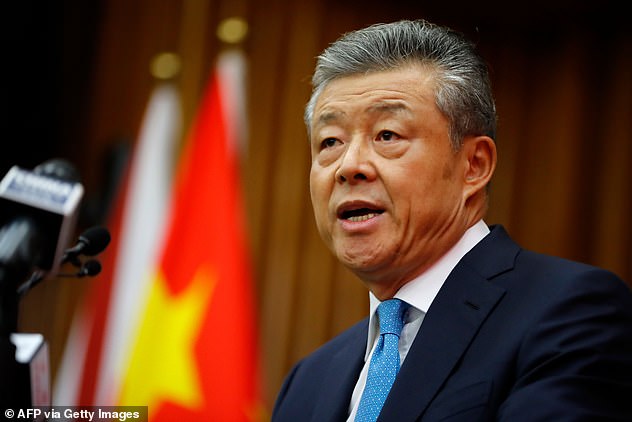 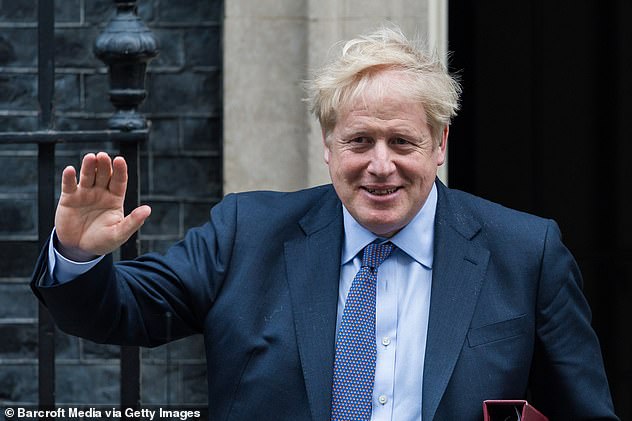 Mr Liu also appeared to suggest that Boris Johnson, pictured in Downing Street yesterday, is yet to speak to Xi Jinping about the crisis

The Foreign Office has actively urged Britons to leave China in a bid to protect their health amid fears the coronavirus crisis could worsen.

Numerous countries around the world, including the US and Australia, have barred foreign travellers from China but the UK is still permitting arrivals.

Mr Liu told a press conference in London that Beijing believed many countries had ‘over-reacted’ to the outbreak.

He said: ‘It is understandable that there are concerns in the UK and the rest of the world about the epidemic.

‘Some people are worried that it might have a negative effect on China’s economy or even the world economy.

‘There are also over reactions by individual countries, panic among the public and even insulting and discriminatory remarks and behaviour targeting the overseas Chinese community.’

He added: ‘It is our hope that the governments of all countries including the UK should understand and support China’s efforts, respect the professional advice of WHO, avoid overreaction, avoid creating panic and ensure the normal cooperation and exchanges between countries.’

Mr Liu said China had cautioned the UK against issuing the updated travel advice for Britons to leave the country because it believes the coronavirus outbreak is now under control.

The ambassador suggested the UK’s official communications with China did not tally with its actions as he said he would ‘like to see their words… meet their actions’.

His address to the media came after it emerged that China had complained to Mr Johnson’s father, Stanley, about the lack of contact from the PM to Mr Jinping.

Stanley Johnson met Mr Liu on Tuesday to discuss environmental issues but the former subsequently sent an email to environment minister Lord Goldsmith to inform him that the ambassador had expressed concerns that the PM had not sent a personal message of support to Beijing.

The email was made public after Stanley Johnson accidentally copied in the BBC to the exchange.

Mr Liu was asked today if he was unhappy with Mr Johnson’s response to the outbreak.

The ambassador appeared to suggest that the PM was yet to speak to his counterpart about the crisis.

‘Since the outbreak the two governments maintain very close contact. Secretary Raab and Cabinet Secretary Sedwill have had telephone conversations with their counterparts.

‘The British side spoke highly of the prevention and control measures put in by China and also offered to help and we appreciate that.