By Phoebe Eckersley For Mailonline

This is moment a hotel collapsed into raging flood water as Storm Ciara unleashed her wrath across the country and wreaked travel havoc with 93mph gales.

The Bridge House Guest House in Hawick, Scotland, was taped off at around 9.30am by emergency services after water began travelling up the embankment.

Fire crews rushed to the scene after the water smashed into the building.

Footage shows the exterior of the Scottish Borders hotel crashing into the torrents below, this morning.

A large section of the guest house is seen tumbling into the murky water as Storm Ciara batters UK with more than 90mph winds and heavy rain.

A kitchen and former stairway, lined with paintings, is revealed inside the subsiding building.

The hotel was evacuated and no injuries were reported, Police Scotland told the Mirror. 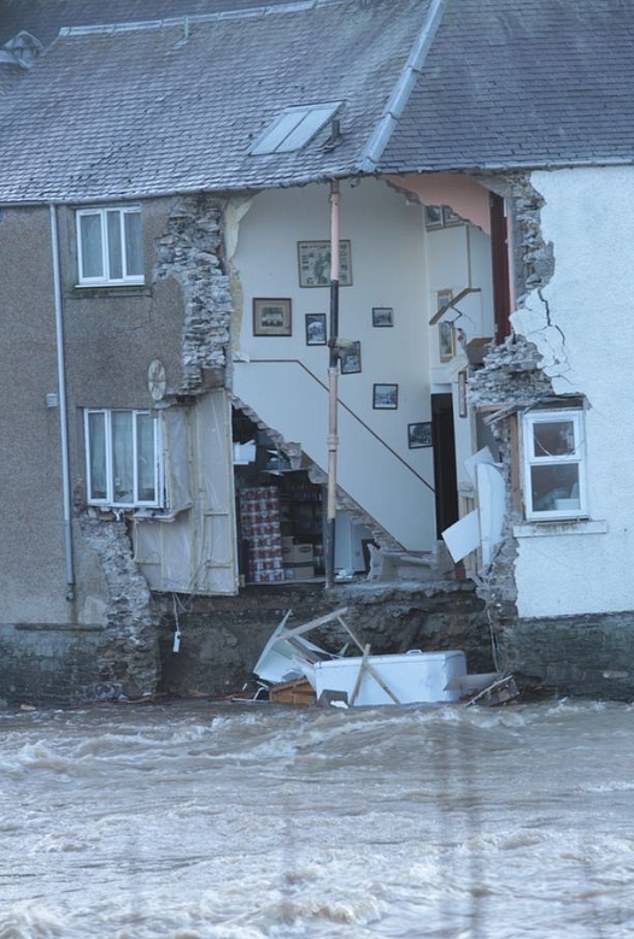 Bridge House Guest House in Hawick, Scotland, collapses into water as Storm Ciara batters UK with more than 90mph winds and heavy rain.  The inside of the hotel can be seen from the above picture

Hotel guests and staff were seen spilling on to the street as chiefs evacuated it.

The building’s foundations were partially washed away in the swollen River Teviot.

An eyewitness, who was due to stay overnight at the guest house, was advised that his reservation was cancelled due to fears of the hotel’s collapse. 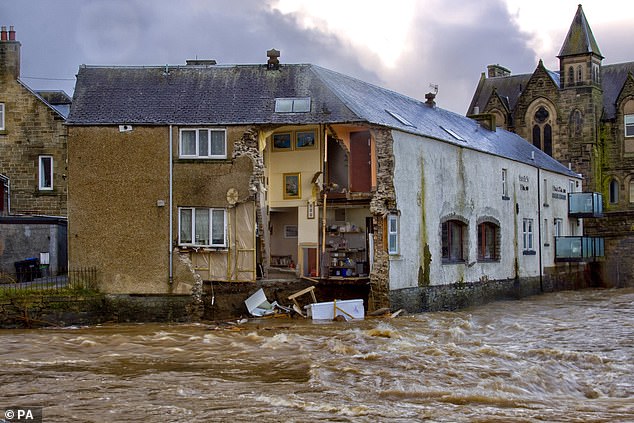 A large section of the guest house is seen tumbling into the murky water and reveals a kitchen. It comes as Storm Ciara’s wrath saw 140 flights cancelled and 214 flood warnings in place, today

Around 900 properties were without power after the storm affected supplies in Mull and Lochearnhead in Perthshire.

Passengers are being advised to check before travelling by several rail companies in Scotland and the United Kingdom, and to defer their plans until tomorrow. 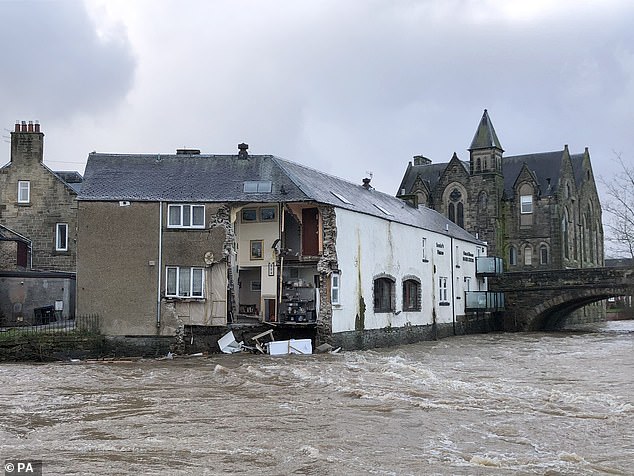 Hundreds of tourists were left stranded as nearly 200 flights into and out of European airports were cancelled as Britain’s biggest storm in seven years swept into Scotland, with snow predicted for tomorrow.

A 40mph speed limit was put in place on the Queensferry Crossing, Scotland, and ferry services were also cancelled after a weather warning for gusts of up to 75mph was issued by the Met Office. 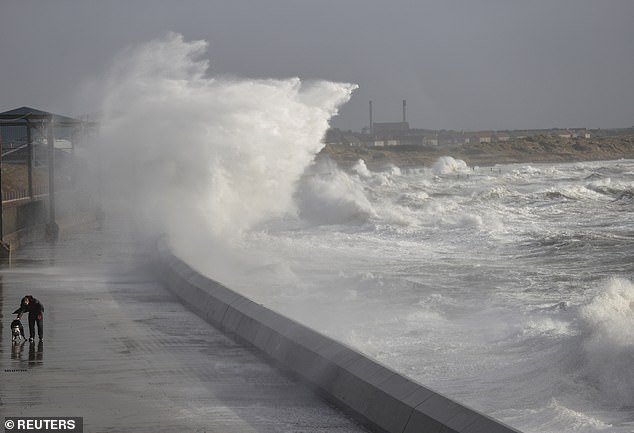 British Airways cancelled around 140 flights due to take-off and landing restrictions and Virgin Atlantic grounded a dozen long-haul departures.

The storm wreaked havoc and saw a total of 214 flood warnings in place demanding immediate actions, with 177 alerts also suggesting that flooding is possible.

Avanti, which runs services on the line from Scotland, northwest England and the West Midlands to London Euston, Tweeted: ‘Journey times will be DOUBLED, please avoid travel unless absolutely necessary.’