A prisoner at the centre of a suspected coronavirus outbreak at a high security jail has been revealed as an alleged drug-dealer kingpin who who was extradited back to the UK from Thailand on January 27.

Mark Rumble, 31, from Oxfordshire, was sent back to the UK to face charges of a conspiracy to supply class A drugs.

Rumble reportedly collapsed in his cell at HMP Bullingdon, close to Bicester on Monday, while a second inmate developed flu-like symptoms and a third other is also being tested for the illness.

Meanwhile, a prison nurse who first checked Rumble has put herself into ‘self-isolation’ at home.

A total of 33 cases of the coronavirus, now named COVID-19, have been diagnosed in Thailand – it was the first country outside of China to declare cases, on January 13. In total, more than 1,100 people have died from the illness. 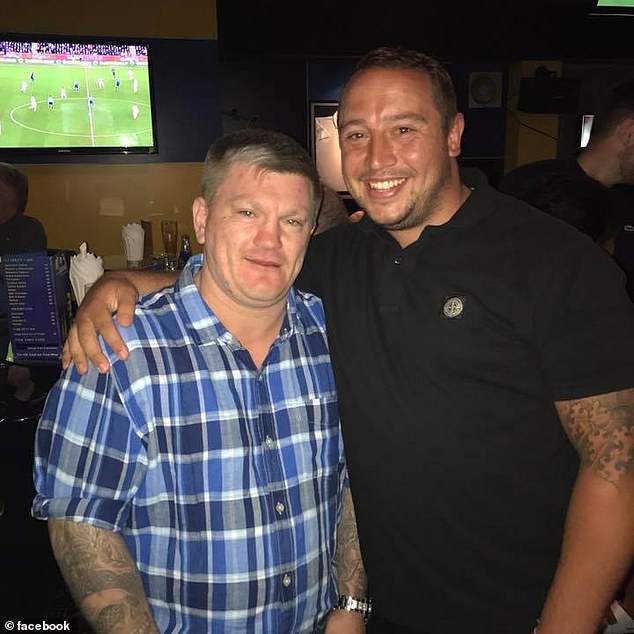 Mark Rumble, 31, from Oxfordshire, with Ricky Hatton in Thailand. He is believed to be the prisoner who collapsed with a suspected case of coronavirus 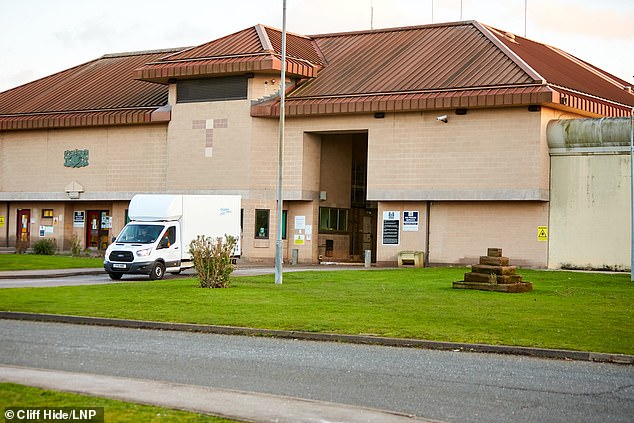 Hundreds of inmates have been confined to their cells tonight, with the prison gripped by panic.

Results from Rumble and the other potentially infected inmates are expected within 24 hours.

A source said: ‘The entire wing is currently in lockdown and will be for the next 72 hours or so.

‘That means that prisoners will remain in their cells for the duration and will be fed food on plates pushed through their door hatches.’

Another source told the Sun: ‘The jail’s been in panic mode since the first person collapsed.

‘Several hundred prisoners on C-wing are in lockdown and unable to leave their cells. A prison is just about the worst place for any outbreak because everyone is in such close quarters.’ 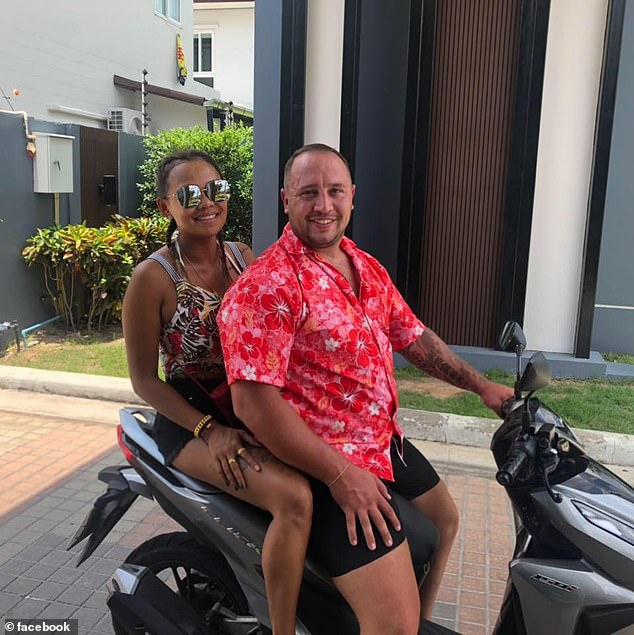 Rumble is due to appear at Oxford Crown Court on February 20, where he is expected to plead non-guilty 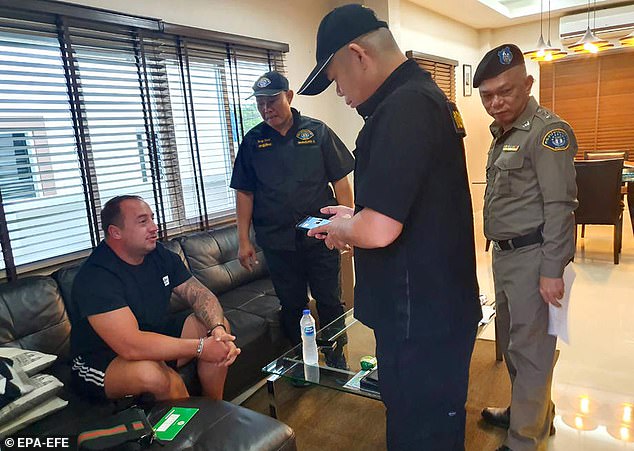 Rumble was rushed to hospital and was understood to be in isolation in the jail’s healthcare wing, but is currently being treated at a ‘specialist hospital’ outside of the prison walls.

The prison source told MailOnline: ‘One prisoner was found collapsed in his cell last night. He is understood to have recently arrived at Bullingdon from a jail in Thailand under a transferral scheme.

‘He is being treated at a specialist hospital outside the prison. The two other prisoners were displaying flu-like symptoms and are in Bullingdon’s hospital wing.

‘All three prisoners were in single cells. A nurse who was in close proximity and contact with the collapsed prisoner has self-isolated as a precaution.’ 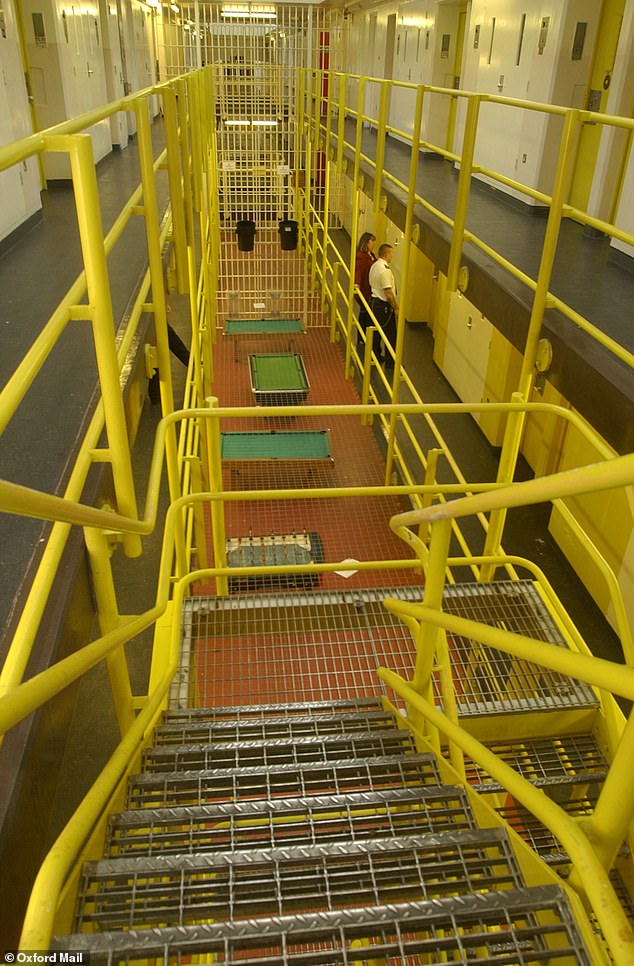 Three men have reportedly become ill in HMP Bullingdon in Oxfordshire, after one of them was transferred to the jail from Thailand last month 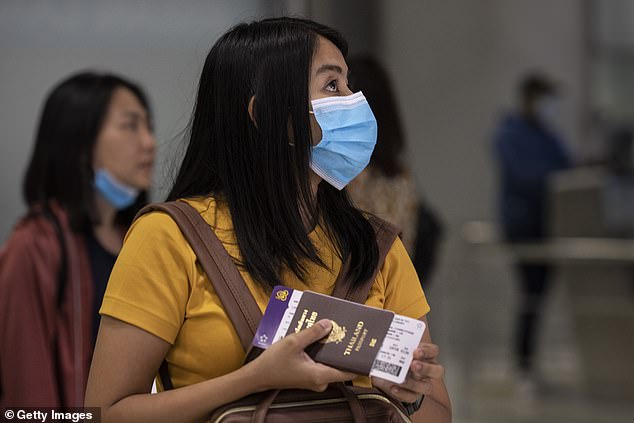 Thailand was the first country outside of China to declare a case of the coronavirus, on January 13. Pictured, a woman wearing a mask at an airport in Bangkok

Officials from Public Health England were spotted at the prison and medics in hazmat suits entered the locked down wing.

The jail holds more than 1,000 inmates – including sex offenders and prisoners on remand. It featured in a four-part ITV documentary on life behinds bars.

Rumble was arrested in Pattaya, Thailand, last November on suspicion of drugs offences.

He is due to appear at Oxford Crown Court on February 20, where he is expected to plead non-guilty. He is currently on remand.

During his time in Thailand, he posted photos of himself posing with celebrities, including boxing legend Ricky Hatton. 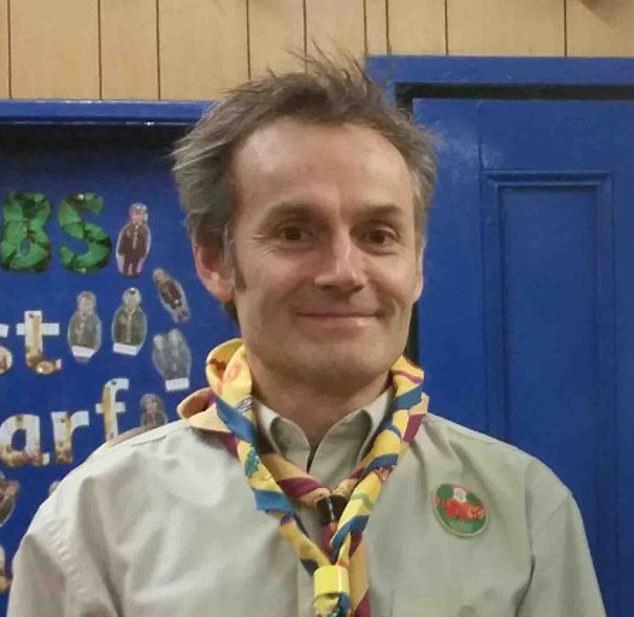 Steve Walsh, a businessman from Brighton, has unknowingly passed on the coronavirus to at least 11 other people after catching it in Singapore but not becoming ill himself. He is in hospital in London 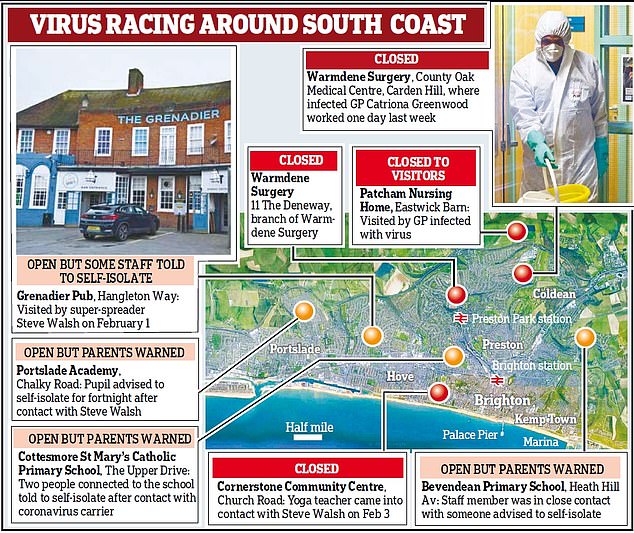 Stephen Walsh, 53, inadvertently brought coronovirus to the UK having attended a conference in Singapore. Health officials told people he had been in contact with to ‘self-isolate’ 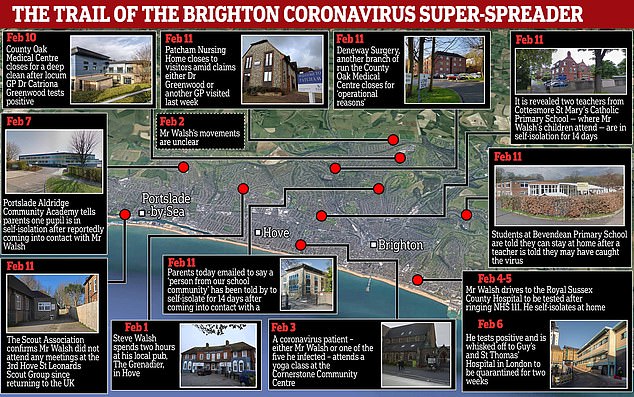 MailOnline has found at least ten sites in Brighton linked to the city’s super spreader or his infected doctor friend including two schools, two health centres and a care home as the area’s residents accused public health chiefs of starving them of information

It comes as five schools in Brighton issued coronavirus warnings to parents after a local scout leader was revealed to be the British ‘super-spreader’ of the disease.

Risk of the ‘silent carrier’ patients

Three patients have tested positive for coronavirus after initially being given the all-clear – raising the prospect of ‘silent carriers’.

The cases – reported yesterday in the US and Japan – raise the prospect that people can be infected with the disease while believing they are healthy.

It also calls into question the accuracy of the test, which since the start of the outbreak has returned negative results for 1,350 patients in the UK.

However, scientists claim such occurrences are ‘common’ when patients have not yet entered the ‘diagnostic window’ – when infections are large enough to be detected.

Professor Richard Tedder, an expert in viruses from Imperial College London, explained that if individuals were tested very soon after they have become infected, there may not be enough of the virus in the body to show up on the analysis.

He stressed that ‘on the balance of probability’ these patients were unlikely to be infectious at that time.

One case involved a Japanese man in his 50s who had fled the Chinese city of Wuhan on an evacuation flight on January 29.

He was tested twice and both came back negative, but a third test on Monday – 12 days later – was positive. He has been isolated in his hotel room since his return from China.

The second man, who is in his 40s, returned from Wuhan on January 30 and initially tested negative but was diagnosed with the virus on Monday. He is also understood to have been in isolation.

Professor Tedder, a visiting professor in medical virology, said: ‘This is inevitable when you are sampling people shortly after they have become infected. This is common to all infections – a so-called diagnostic window.

‘I don’t think we should be unduly worried by these cases.’

Stephen Walsh, 53, broke his silence after discovering he was the source of an extraordinary web of cases stretching across the UK and Europe.

Speaking from an NHS isolation room, the sales executive yesterday revealed he had ‘fully recovered’ and insisted he acted as quickly as possible once he realised the threat he posed.

Two GP surgeries in his home city of Brighton and Hove have been closed and a nursing home was yesterday placed in lockdown as a precaution.

Meanwhile, several schools have been told to place themselves in quarantine.

One of the largest secondary schools in Brighton yesterday told parents a ‘member of its community’ was in quarantine because of suspected coronavirus contact.

Varndean School, which has around 1,300 pupils, was one of the schools in the city to announce that somebody connected to it had been told to ‘self-isolate’ for 14 days by Public Heath England.

Parents at Cottesmore St Mary’s Catholic Primary School in Hove told of their shock after learning two pupils – thought to be Mr Walsh’s children – were in quarantine.

Mr Walsh, a cub scout leader and father-of-two from Hove who children refer to as Shere Khan after the tiger from Jungle Book, contracted the virus after travelling to a business conference in Singapore in mid-January.

But after almost two weeks of carrying the virus, authorities discovered he was linked to at least 11 cases in the UK, France and Spain.

Yesterday, authorities were still tracking the contacts of Mr Walsh and his five associates – including two GPs – who have also tested positive in the Brighton area over the last few days.

One of the two infected GPs also worked at the A&E unit at Worthing Hospital in West Sussex, which was last night contacting patients and staff to tell them what precautions they should take.

The doctor, who has not been identified, treated a ‘small number’ of patients at the hospital on February 4 and 5 before they became unwell and ‘self-isolated’.