Doctors have warned the London Underground could be a hotbed for the spread of coronavirus after the first case of the deadly disease was confirmed in the capital.

The latest and ninth UK victim, a woman, was diagnosed yesterday afternoon and is currently being treated at Guy’s and St Thomas’ Hospital in south London.

Officials confirmed she caught the virus in China before flying back the UK a few days ago.

There are now concerns the city’s status as a transport hub could exacerbate the spread of the virus, however doctors have said the risk of infection for residents in the capital remains low.

Dr Robin Thompson, of the University of Oxford, said: ‘In general, if an initial case is in a densely populated area, then the risk of sustained person-to-person transmission following is higher. 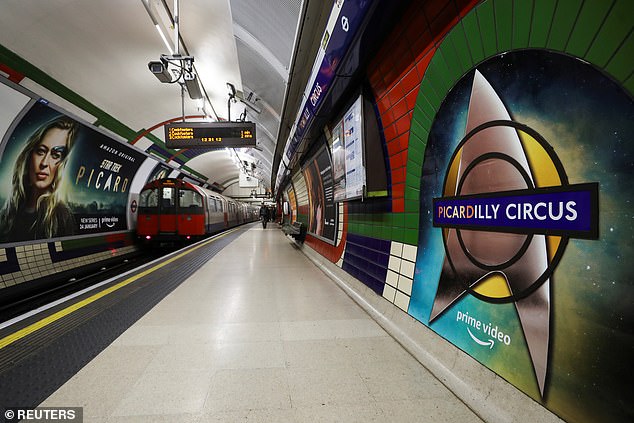 ‘This is exacerbated by the fact that London is a transport hub, and the underground could provide a network to spread the virus quickly.

‘As a result, given this case was in London, it might be expected that there is an increased risk posed by this case compared to the others we have seen.’

Dr Michael Head from the University of Southampton added: ‘It should also be noted that of the 1,750 tests carried out so far in the UK, over 99 per cent of those tested have been negative for the coronavirus.

‘Thus, risks to Londoners and UK residents remain low, though people should continue to keep an eye on guidance for the general public.’

While the patient has now been quarantined, Dr Thompson says the risk of the virus spreading depends on the woman’s interactions prior to being placed in isolation.

‘The key factor here is the number of contacts that this infected individual has had prior to being isolated,’ he said.

‘If this is low, then the risk of sustained human-to-human transmission is also low.’

As Public Health England investigates the patient’s movements, Dr Nathalie MacDermott from the National Institute for Health Research said London commuters should continue to go about their business as usual.

‘Provided the individual followed the government’s advice (to self-isolate) there should be little concern of transmission to the general public in London,’ she said.