Love Island returned to screens this evening with a touching tribute to its former presenter Caroline Flack.

Last night’s episode had been cancelled with producers stating it would ‘not be broadcast out of respect for Caroline’s family’.

Voice over Iain Stirling opened the show with a touching tribute to his former colleague, saying he hoped people would be kinder.

At the beginning of the show a clip of the sea played with Iain doing the voice over, Iain then went on to read out a touching tribute which lasted 73 seconds.

He said: ‘We are all absolutely devastated by the tragic news that Caroline, a much loved member of our Love Island family has passed away. Our thoughts with family and friends at this dreadful time.

‘Caroline and me were together from the very start of Love Island and her passion, warmth and infectious enthusiasm were a crucial part of what made the show connect with millions of viewers.

‘Like many of you, right now we are all just trying to come to terms with what has happened. My only hope is that we can all try and be kinder, always show love and listen to one another.

‘Caroline, I want to thank you for all the fun times we had making our favourite show, you were a true friend to me, I’m going to miss you Caz’. 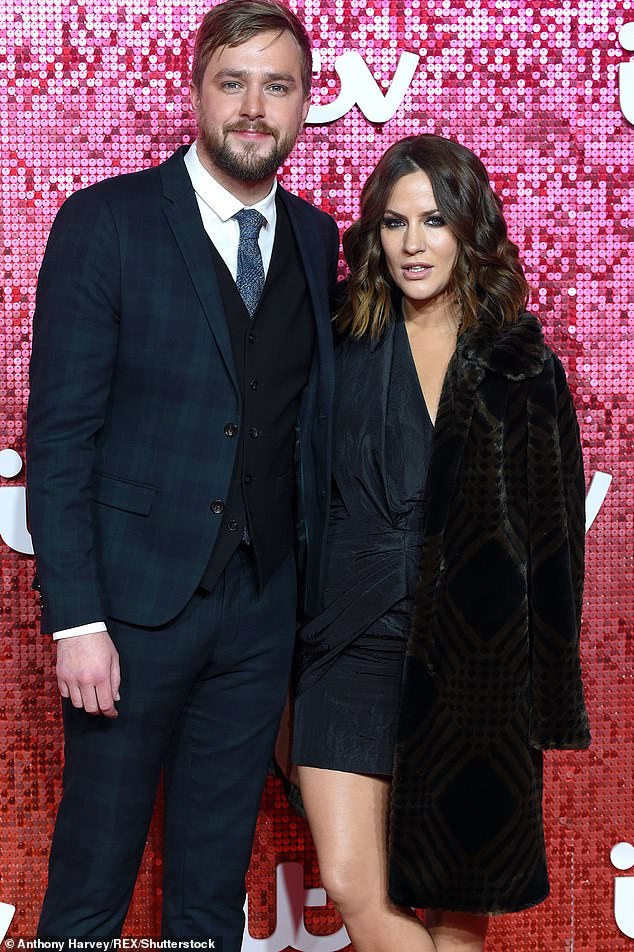 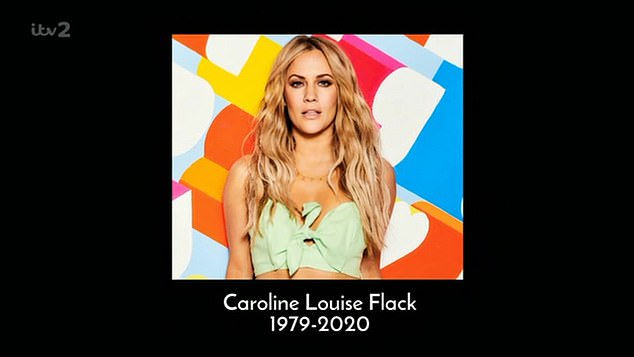 Caroline Flack was found dead at her London flat aged 40. She had previously presented ITV show Love Island. After the tribute the above image of the presenter flashed up on the screen 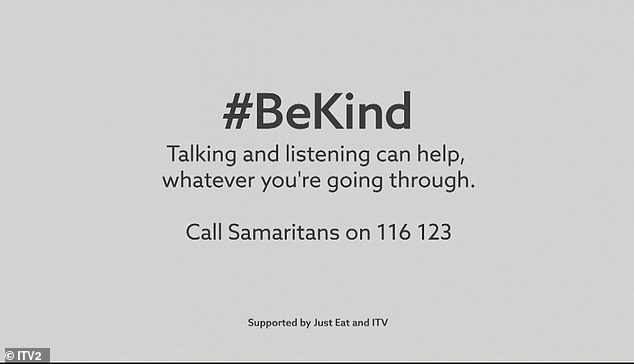 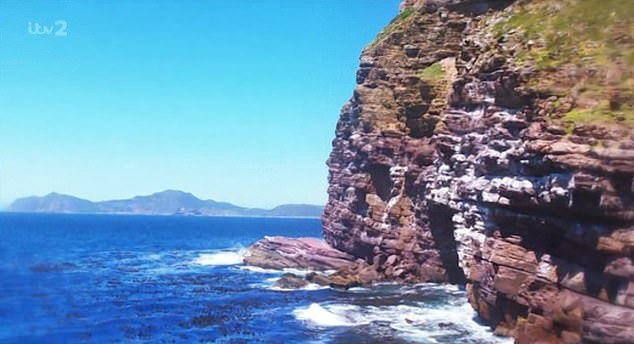 Iain had clearly been distressed and seemed close to tears as he read out the tribute.

After reading out the tribute, the episode of the show continued as normal.

But Iain refrained from his usual voice over, which would normally see him commenting on the contestant’s behaviour on the show, his voice was not heard again until he announced the commercial break.

Current presenter of Love Island Laura Whitmore also tweeted this afternoon stating that there would be no AfterSun show on this evening and praised those working on the show.

She then followed up with a tweet minutes after the tribute that aired, telling Iain Stirling she ‘loved him’ and that she knew the tribute would ‘not have been easy’.

Iain then also tweeted out the link for the Samaritans which featured the ‘BeKind’ hashtag.

Social media users immediately reacted to the tributes with some claiming that it ‘was beautiful’ but that it had been ‘too short’.

Flack, 40, was found dead inside the Stoke Newington property she had been living in on Saturday. 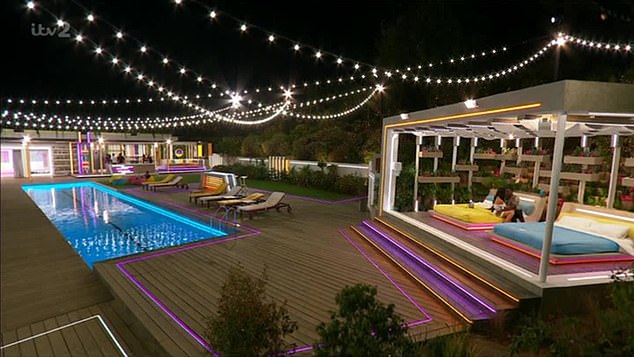 The TV presenter, aged 40, took her own life after a worried friend who was staying with her went to the shops, leaving her alone at her London home (pictured) 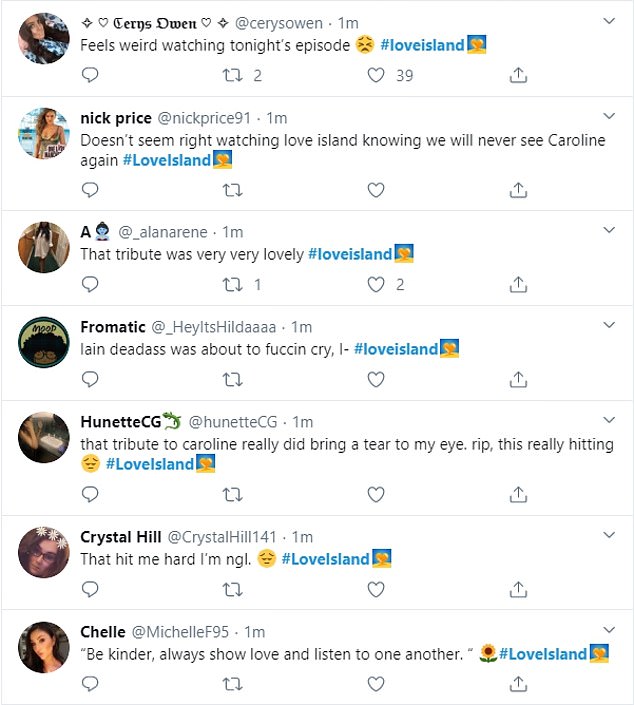 Her father Ian discovered the former Love Island host who had taken her own life while the friend who was staying with her ‘popped out to the shops’.

One said: ‘That tribute was very very lovely’, while other’s said it was clear Iain was close to tears while reading the tribute. Another added: ‘Doesn’t seem right watching Love Island knowing we will never see Caroline again’.

Other social media users criticised the show for not doing enough to remember the presenter.

One tweet read: ‘They made it look like they were going to do some amazing thing for Caroline but no she got a short speech lets be honest she deserved better like they could have done a montage in her honour.’

Another commented: ‘It feels really wrong watching #loveIslandtonight – the tribute was touching and these instead of Just Eat adverts are a nice touch. But it just doesn’t seem enough, to cut from her very short tribute to Islanders laughing and joking. #BeKind.’

The show ended with the image of Flack flashing up once more and the ‘BeKind’ message being shown again.

The Love Island Twitter account also posted the tribute with some also commenting that the presenter had ‘deserved better’. 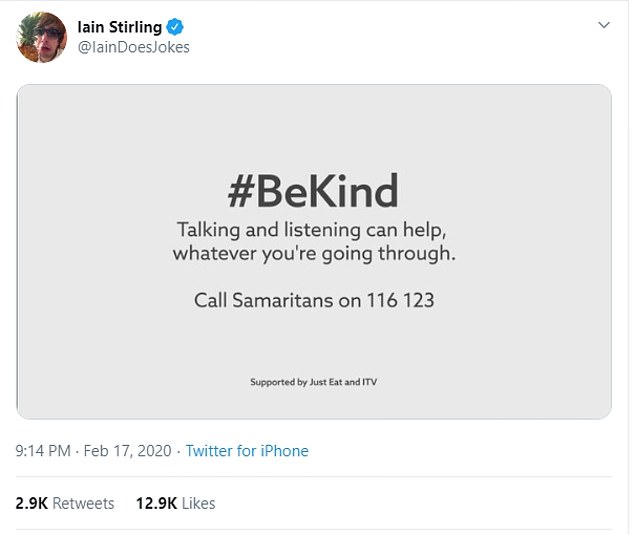 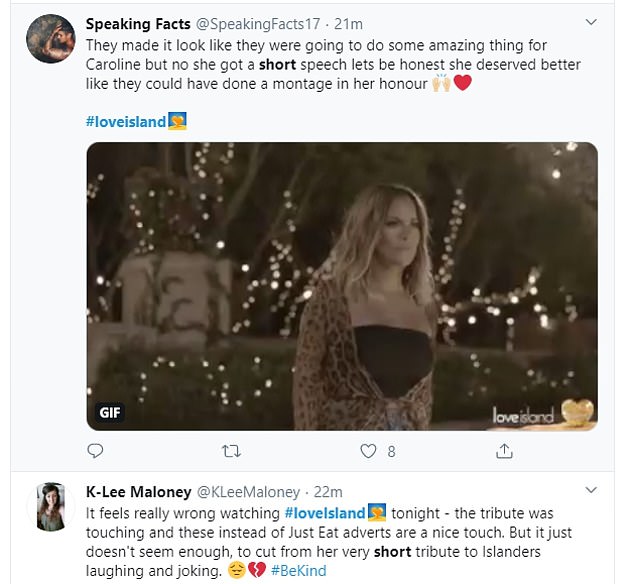 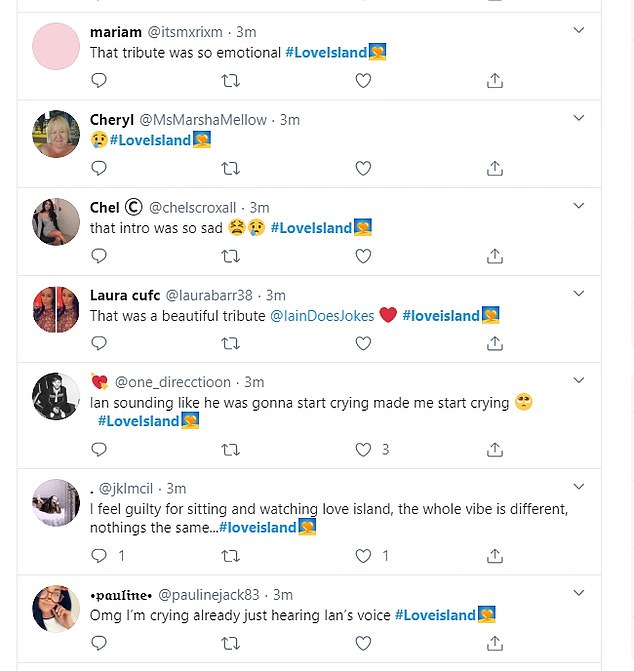 Many praised Iain for the ‘beautiful tribute’ which lasted 73 seconds at the beginning of the show. This is while others complained it was too short

Earlier today ITV boss Kevin Lydo said everyone at the broadcaster was ‘devastated’ and are ‘still trying to process the tragic news’.

It was also said that producers had kept in close contact with Flack after she stepped down from the show due to her upcoming trial.

In a statement, Mr Lygo said: ‘Caroline was part of Love Island from the very beginning and her passion, dedication and boundless energy contributed to the show’s success.

‘After Caroline stepped down from the show ITV made it clear that the door was left open for her to return and the Love Island production team remained in regular contact with her and continued to offer support over the last few months.

‘Love Island will return tonight and will include a tribute to Caroline that the team in South Africa and Iain Stirling have put together.

‘Caroline loved Love Island and was very vocal in her support of the show. Viewers could relate to her and she to them and that was a big part of the programme’s success. We will all miss her very much.’

ITV have also worked with sponsor JustEat to replace the idents – a video informing the viewer what they are watching – with information about the Samaritans, so people who are struggling with their mental health can access help.

The broadcaster is facing a reality show crisis following Flack’s suicide, but after talks yesterday it decided to push ahead with the current series of Love Island.

The tribute from the show comes after ITV star Amanda Holden also criticised the broadcaster for its treatment of Flack.

Taking to Instagram last night Amanda said Flack had been ‘thrown to the dogs’.