The dam that thinks it’s a waterfall! Floods plunge over the inundated barrier after a moth of rain fell on Wales during Storm Dennis

By Sophie Law For Mailonline

A dam has unleashed a month’s rainfall after it overflowed following torrential downpours in Wales during Storm Dennis.

A clip shows the Caban Coch Dam, in the Elan Valley, transformed into a waterfall as gallons of rainwater cascades over the structure’s edge.

Water can be seen thundering down the dam at an alarming rate – which falls to a depth of over 120 feet.

Caban Coch Dam contributes to the supply of water to Birmingham when water levels are normal. 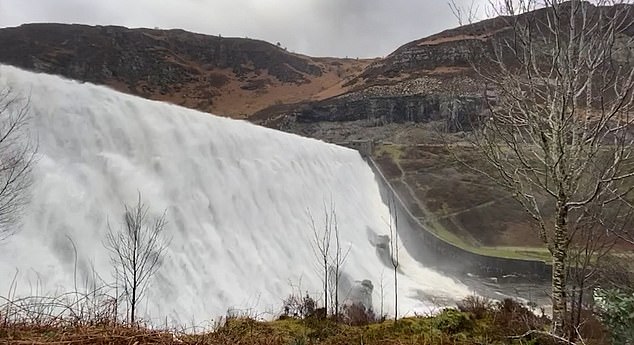 Thousands of Britons are being forced to abandon their homes as the country battles the worst floods in 200 years in the aftermath of Storm Dennis, with four more days of rain this week set to result in a ‘national emergency’.

Officials are urging residents in South Wales, Yorkshire, Shropshire, Worcestershire and Herefordshire to evacuate, warning the UK is ‘not out of the woods yet’ and they risk their own safety if they stay put.

York, Sheffield and Leeds face up to another three inches of downpours throughout Friday, which the Met Office say won’t relent until the early hours of Saturday. 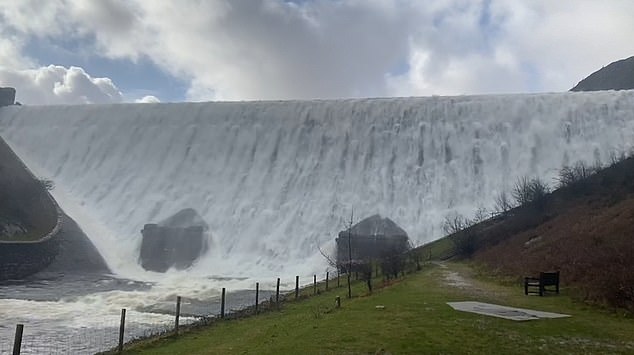 There are still 350 flood alerts in place nationwide – including six severe ‘danger to life’ warnings – with the latest put in place after the River Severn burst its banks.

More than 1,000 rescue workers are battling around the clock to save people from their inundated homes before more rain hits.

In Monmouth pensioners were carried out on inflatable stretchers, while in Ironbridge, Shropshire, families were left clutching their possessions – including their pets – in a bid to save them from muddy flood water inside their properties. 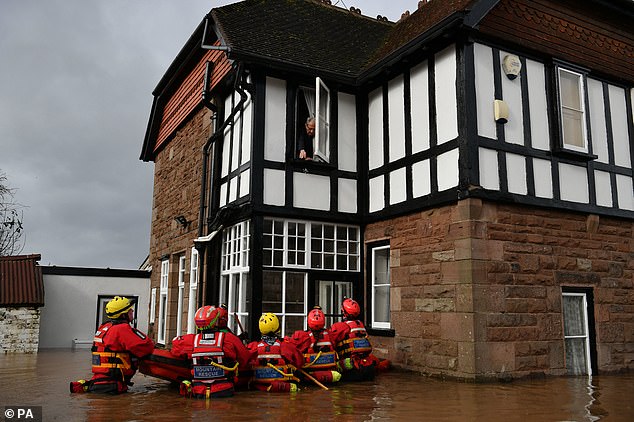 A man is pictured dropping his house keys to mountain rescue workers below as they prepare to evacuate him from his home in Monmouth, South Wales today

The Prime Minister has so far resisted calls to arrange a meeting of the Government’s emergency Cobra committee and has no plans to visit any of the areas devastated by flooding.

He is believed to be staying at the Chevening Estate in Sevenoaks, Kent, with his partner Carrie Symonds while Parliament is in recess.

As well as 1,000 staff, the Environment Agency claims three miles of barriers have been deployed and 90 pumps are now in action. 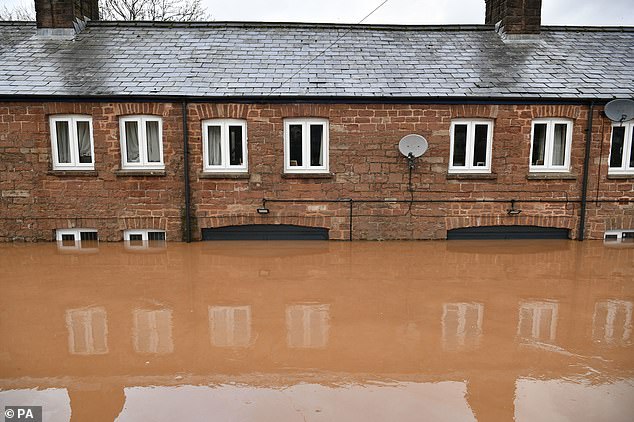 Flooded cottage in Monmouth, South Wales, are among the worst-hit in the country with water nearly reaching the first floor