Ryanair passengers cry, pray and even retch as flight from Morocco to Belgium shakes violently during Storm Dennis

By Sophie Tanno For Mailonline

Passengers on a Ryanair flight rocked by bad turbulence during Storm Dennis were filmed crying, praying and even retching.

The flight from Oujda, Morocco to Brussels, Belgium proved to be a bumpy ride as the plane was jolted violently in the air.

It came as Storm Dennis tore through Belgium at the weekend, uprooting trees and flooding roads. 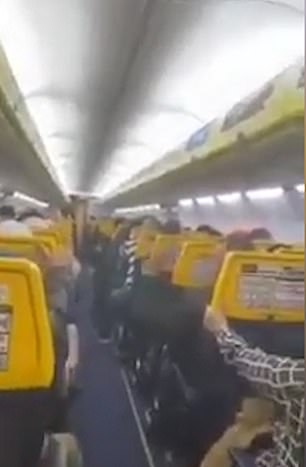 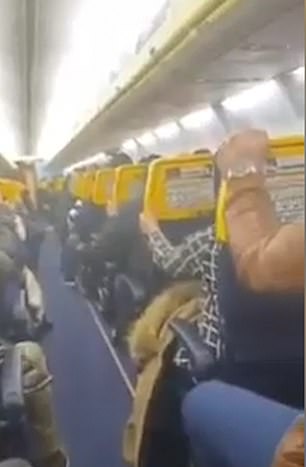 Passengers on a Ryanair flight rocked by bad turbulence during Storm Doris were filmed crying, praying and even retching

Footage taken by one of the passengers on board the Ryanair flight shows several terrified travellers clutching the seat in front of them.

Passengers can be heard retching while others pray as the aircraft jolts suddenly from side to side.

Others on board cry and moan audibly in terror.

The flight, which has an average duration of three hours and 40 minutes, landed at Charleroi airport as Storm Dennis raged with wind gusts of up to 62m/h.

No injuries of passengers or staff on board the flight have been reported.

It comes as thousands of Britons are being forced to abandon their homes as the country battles the worst floods in 200 years in the aftermath of Storm Dennis, with four more days of rain this week set to result in a ‘national emergency’.

Officials are urging residents in South Wales, Yorkshire, Shropshire, Worcestershire and Herefordshire to evacuate, warning the UK is ‘not out of the woods yet’ and they risk their own safety if they stay put.

Communities worst-hit by last weekend’s storm are braced for further misery tomorrow when two inches of rain falls in just 24 hours. York, Sheffield and Leeds face up to another three inches of downpours throughout Friday, which the Met Office say won’t relent until the early hours of Saturday.

There are still 350 flood alerts in place nationwide – including six severe ‘danger to life’ warnings – with the latest put in place after the River Severn burst its banks.