Latest News
Home /Car, bus and train use plummets across UK as road traffic falls to a quarter of its normal volume

Car, bus and train use plummets across UK as road traffic falls to a quarter of its normal volume since country entered lockdown

Car, bus, and train use has plummeted across the UK as road traffic falls to just a quarter of its normal volume since the country entered lockdown.

Giving a presentation yesterday on the latest data since the country embraced the new draconian measures, Sir Patrick Vallance said there had been a ‘dramatic’ drop in the use of public transport.

Sir Patrick said: ‘The measures are in place, they are making a difference, they are decreasing the contact which is so important to spread the disease and we’re doing a good job at cutting that down.’

The government’s chief scientific adviser said the latest information from Transport for London showed an enormous drop off to ‘just a few per cent’ on the number of commuters using the tube. 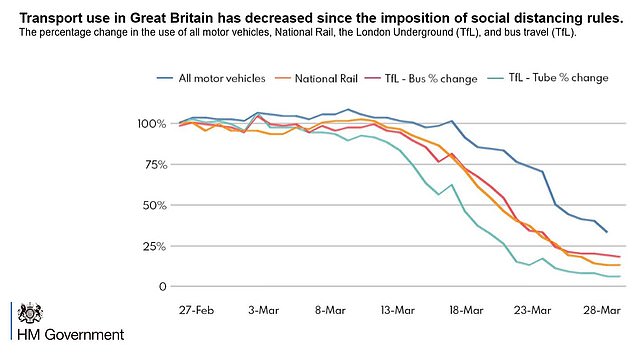 A slide from the presentation given by Sir Patrick Vallance, showing the huge reduction in use of the tube, bus, trains and car usage 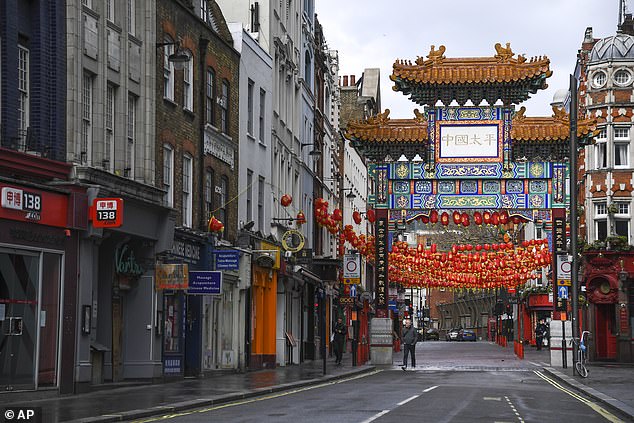 An empty road in the Chinatown district of London on Sunday, that would normally be packed with tourists and people eager to get a bite to eat 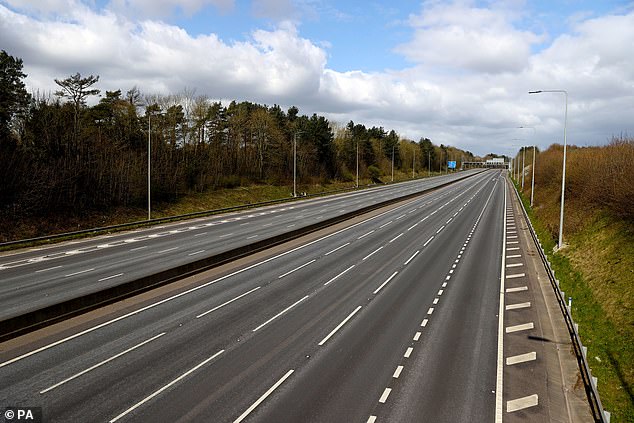 He added there have also been large reductions in footfall as people heed the advice of the Prime Minister and stop all non-essential travel.

Sir Patrick’s presentation came after a series of eerie images showing usually packed roads across the country completely empty, as people choose to stay at home.

Other pictures have been circulating of completely vacant areas of London usually packed with tourists, such as Leicester Square, Soho and the West End.

Despite a large recorded drop off in the use of public transport, No10 and City Hall continue to be a loggerheads over packed rush hour tubes.

Mayor of London Sadiq Khan has come under considerable pressure from the government after reducing the number of services available, leaving key staff such as NHS workers, to unintentionally flout social distancing measures. 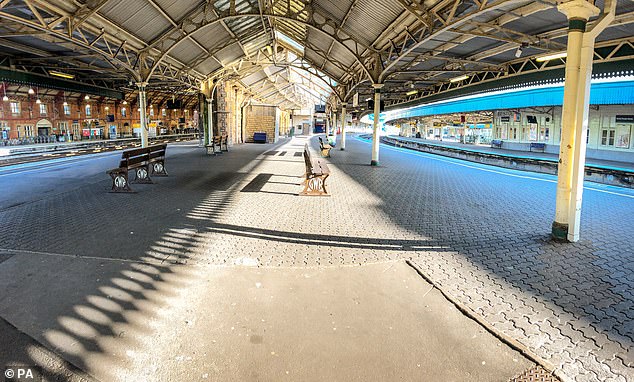 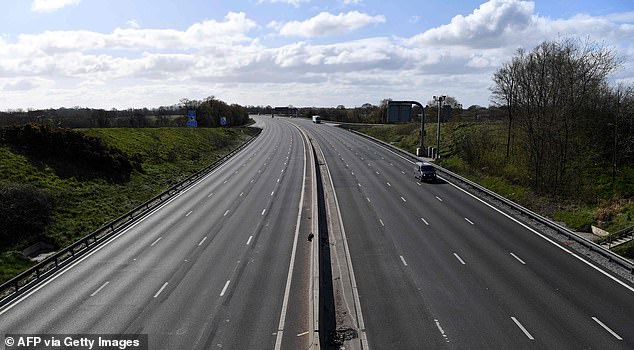 The empty M6 motorway is pictured from junction 18, near Middlewich, north west England on Sunday

Yesterday Rachel Baines posted a shocking image of a packed train and said: ‘I am a frontline NHS worker and this is how I have to travel to work due to @TfL reducing their service and people ignoring the #StayHome message. Absolutely disgusting.

Edie Sousa, who was forced on to a packed Tube, tweeted: ‘Tube stations too full! How are frontline NHS workers getting to work safely. It’s a joke’.

Transport for London said there were problems on the Jubilee line yesterday morning due to a broken-down train, which caused a gap in the service.

But as Mr Khan again faced calls to implement a fuller service yesterday, cleaners in hazmat-style suits were filmed spraying an anti-viral substance onto seats and handrails. The spray is said to keep carriages safe for up to 30 days.

He said Transport for London (TfL) had gone ‘too far’ in reducing services in a failed attempt to halt the spread of coronavirus and was now ‘struggling to recover.’

The comments were made during a closed Commons Transport Committee meeting between MPs via Skype on Wednesday. A note summarising the discussion was released to the media on Friday.

In light of Department for Transport guidance, Mr Shapps said he had raise six different points to improve the Tube overcrowding situation, including redeploying night staff during the day to run more trains.

He added: ‘The crowding was unacceptable. The situation had not been well handled.’