New York City Mayor Bill de Blasio has warned the worst of the coronavirus pandemic it yet to come and predicts the outbreak will stretch into May as the city scrambles to increase hospital capacity to cope with the crisis.

The mayor’s warning came a day after stark figures showed New York City had experienced one coronavirus death ever 2.9 minutes after the number of deaths increased by 127 over a six-hour stretch on Monday.

The death toll in New York City increased to 917 by Monday night with more than 38,000 confirmed cases. Just six hours earlier, figures showed the death toll was at 790 with just over 36,000 cases.

In an interview with NBC’s Today on Tuesday, de Blasio warned that the trajectory of coronavirus cases in the city and the death toll showed that the worst was still to come.

‘We’re seeing a sharp upturn over the last days, certainly the last few weeks. We have to look at this pattern and conclude that the worst is certainly in the next few weeks minimum,’ he said.

‘I could see it going into May in fact with the numbers we’re looking at, because we have community spread. That’s really the issue.’ 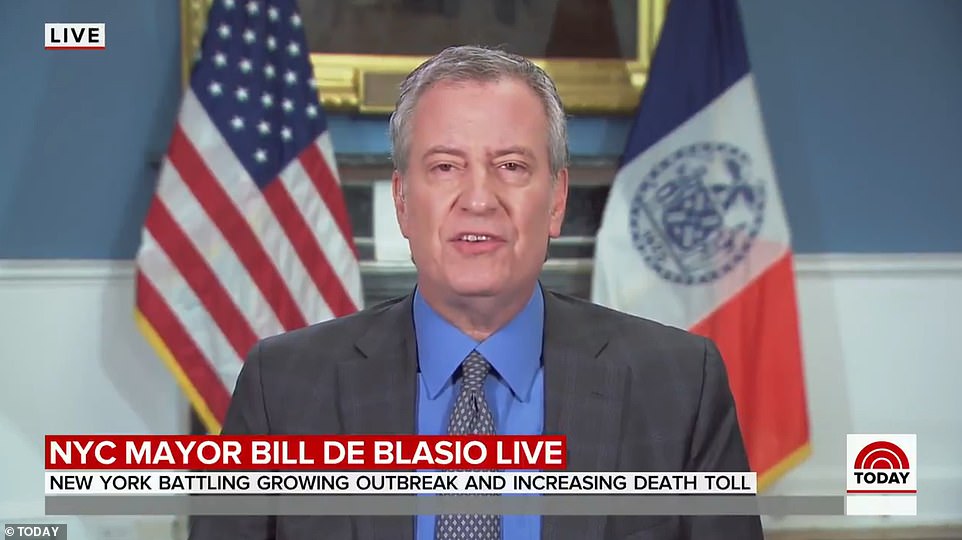 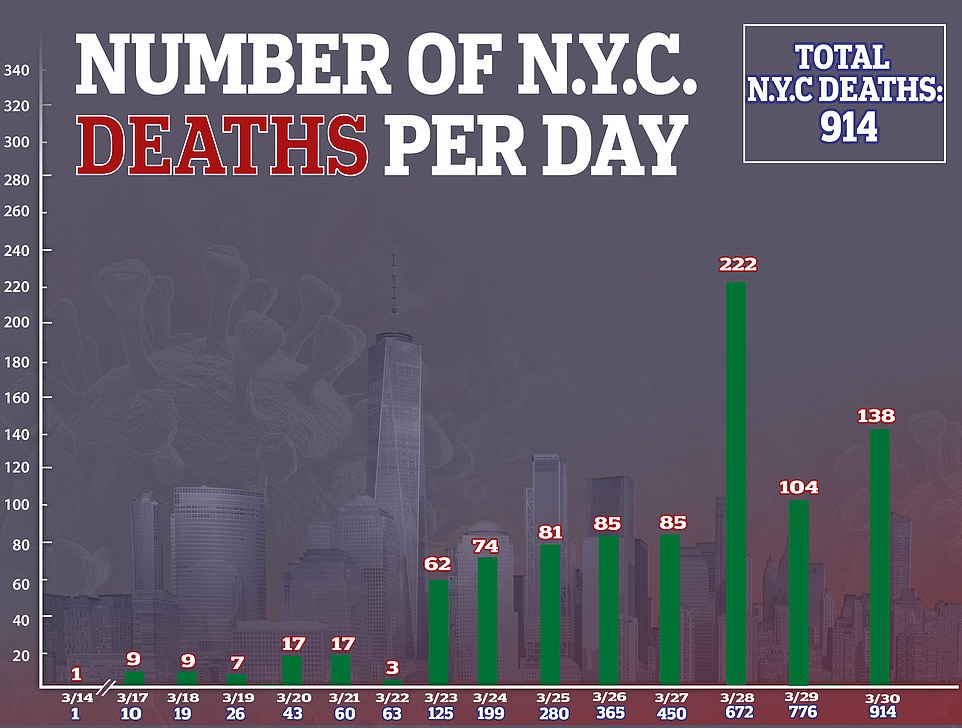 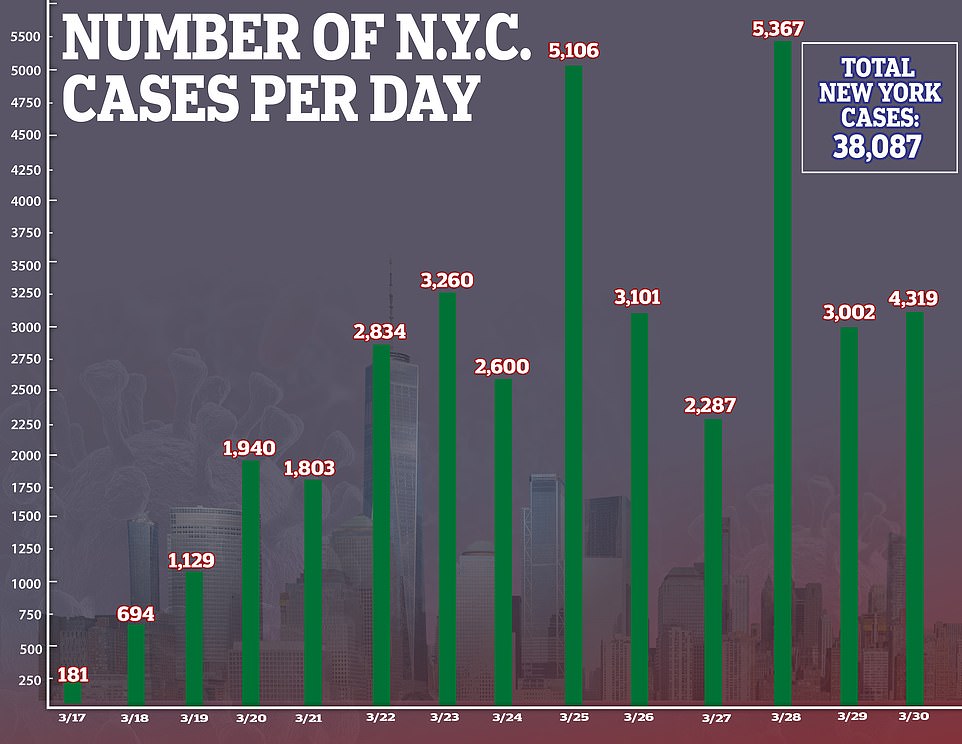 Officials are now scrambling to provide additional beds to help cope with the influx of coronavirus patients in New York City, according to de Blasio.

‘We have about 20,000 hospital beds in all of New York City. That’s where we were, say, the beginning of this month. Normal times. We project the potential that all of those beds, all 20,000, will have to be turned into intensive care beds to focus on COVID-19 patients who are really, really sick,’ he said.

‘We’ll require a level of hospital capacity we’ve never seen… for the weeks ahead, let’s not kid ourselves, it gets a lot worse before it gets better.

‘If testing had come earlier, I asked for testing from the federal government originally on January 24th. If we had gotten it in January, beginning of February, we could have gotten ahead of this. I think there are still states where they can. Getting them testing is crucial.’

The USNS Comfort, a Navy hospital ship with 1,000 beds, 12 operating rooms and a full medical staff, arrived in the city on Monday. It will be used to treat non-coronavirus patients to free up space in city hospitals.

Field hospitals have also been set up in Central Park, the Javits Center and even in hotels like the Plaza and St Regis.

Makeshift morgues have been put in place at various hospitals across the city as the death toll continues to rise and healthcare workers struggle to keep up with the body count.

The last time that New York City deployed a fleet of makeshift morgues outside hospitals was in the aftermath of the September 11, 2001, terrorist attacks. 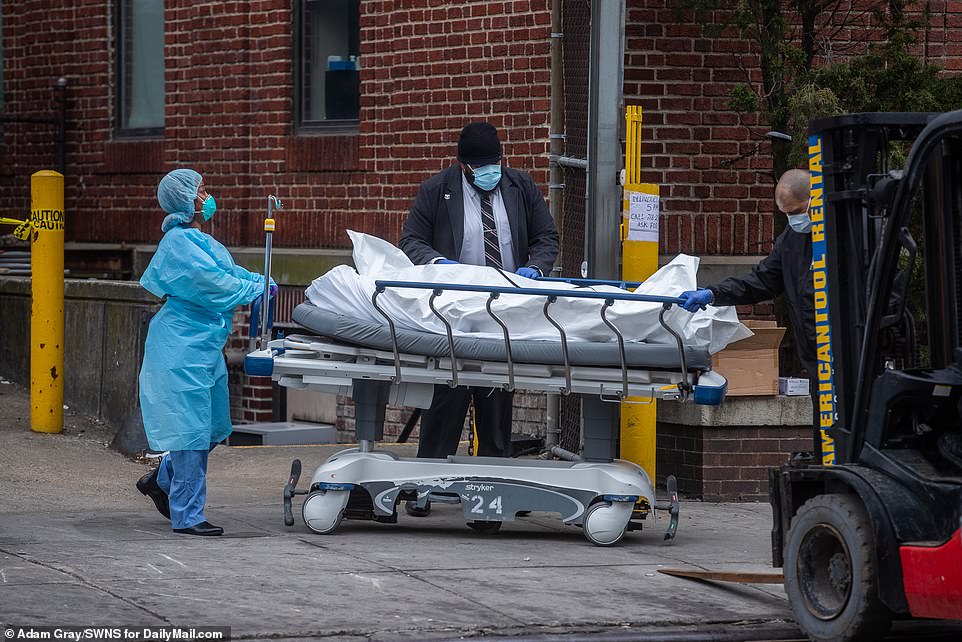 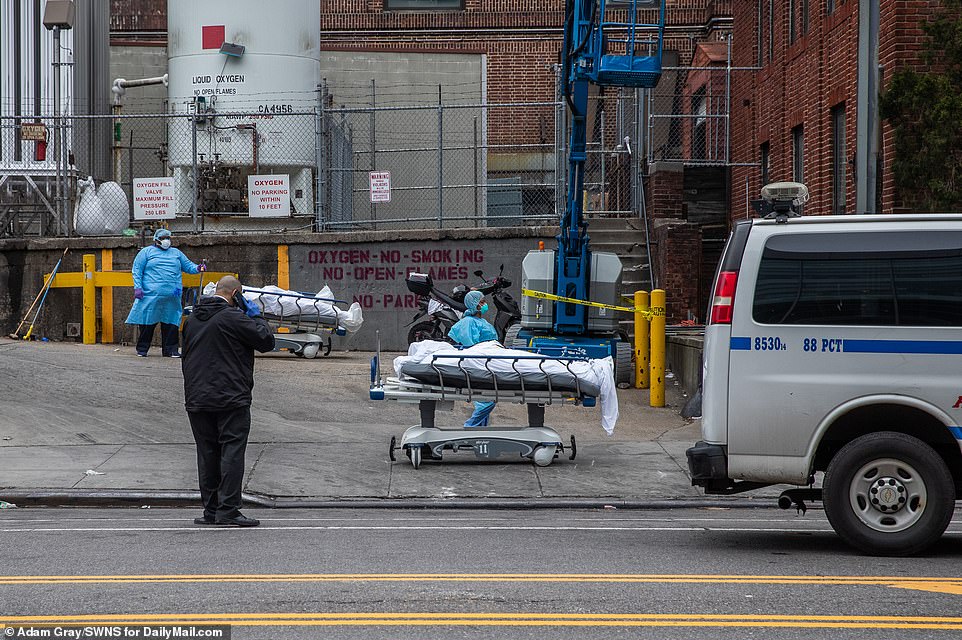 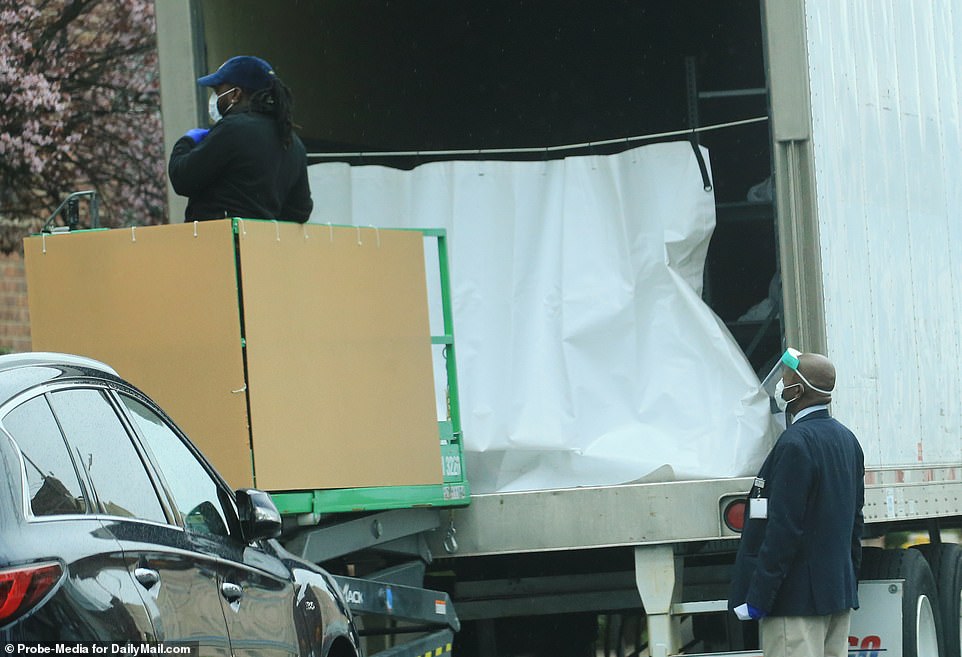 Staff outside Brooklyn’s Mount Sinai hospital wearing masks were seen standing with the body on a cherrypicker which had cardboard tied to it as a makeshift screen, while a sheet was slung across the back door of the truck 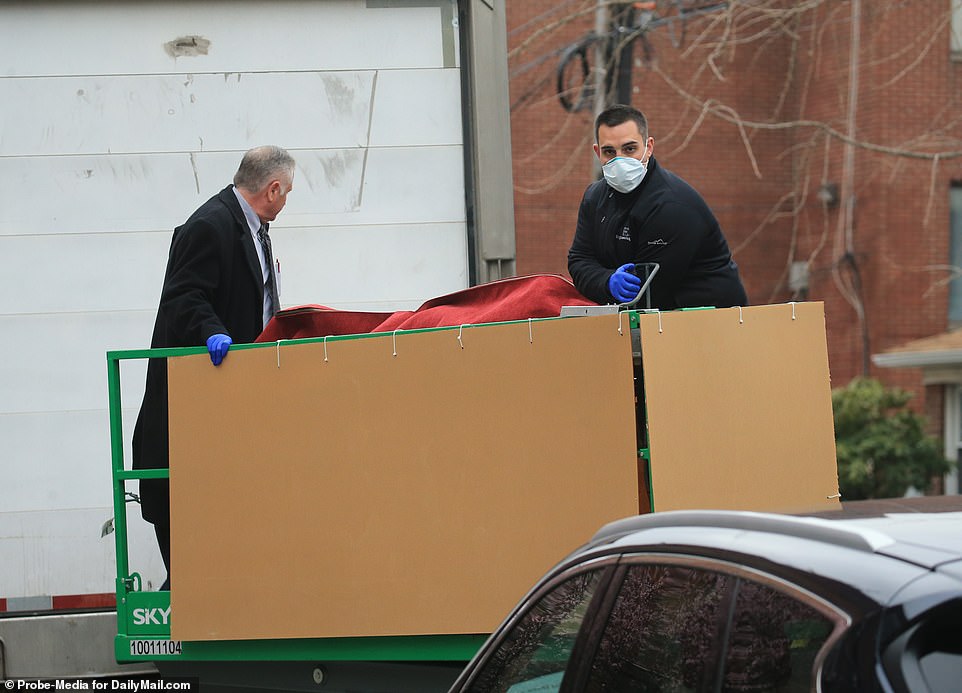 The city’s death toll surged to 914 on Monday, with a total of another 253 fatalities in the state in the last 24 hours. The number of cases in the city meanwhile soared to more than 38,000, while the number infected in the state stands at 66,497 (pictured: workers load bodies onto the back of a truck outside Mount Sinai hospital in Brooklyn)

Meanwhile, De Blasio continued to warn people about the importance of social distancing and said it was ‘unacceptable’ that New Yorkers were not adhering to the warnings to help stop community spread of the virus.

‘People must practice social distancing. I’ve authorized our police to start giving out fines – $250, $500 fines to people who don’t get it,’ de Blasio said.

At the moment, New Yorkers are allowed outside and to visit grocery and drug stores but they are being asked not to leave their homes if they can avoid it.

Despite this, dozens of people were spotted lining the river and not staying six feet away from each on Monday to watch the USNS Comfort arrive in New York.

President Donald Trump has also urged Americans to follow the social distancing guidelines and extended the national restrictions to at least April 30.

Total deaths across the United States increased by at least 541 on Monday alone as states raced against time to prepare their hospitals for the pandemic.

An analysis by the the University of Washington School of Medicine has predicted that by April 20, the daily increase of deaths will hit 2,000.

Deaths per day will drop to below 100 after June 9, according to the predictive analysis.

Some people could continue to die of the virus as late as July, although deaths should be below epidemic levels of 10 per day by the first week of July.

The analysis also highlights the strain that will be placed on hospitals with the number of hospitalized patients expected to peak nationally by the second week of April – although the peak may come later in some states.

If social distancing is adhered to, the number of deaths from coronavirus is predicted to reach about 82,000 over the next four months, across all 50 states. 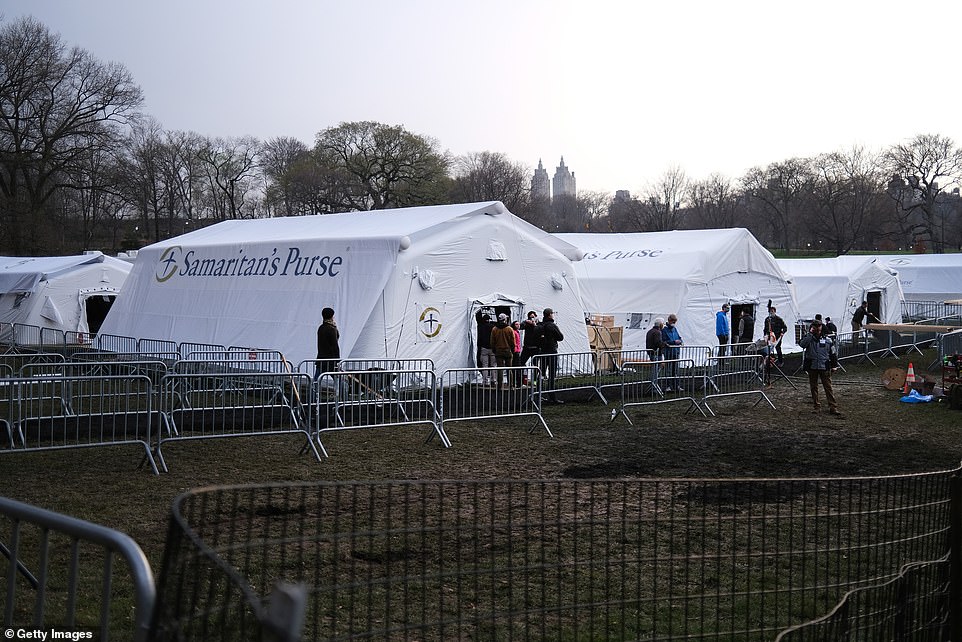 Field hospitals have also been set up in Central Park, the Javits Center and even in hotels like the Plaza and St Regis 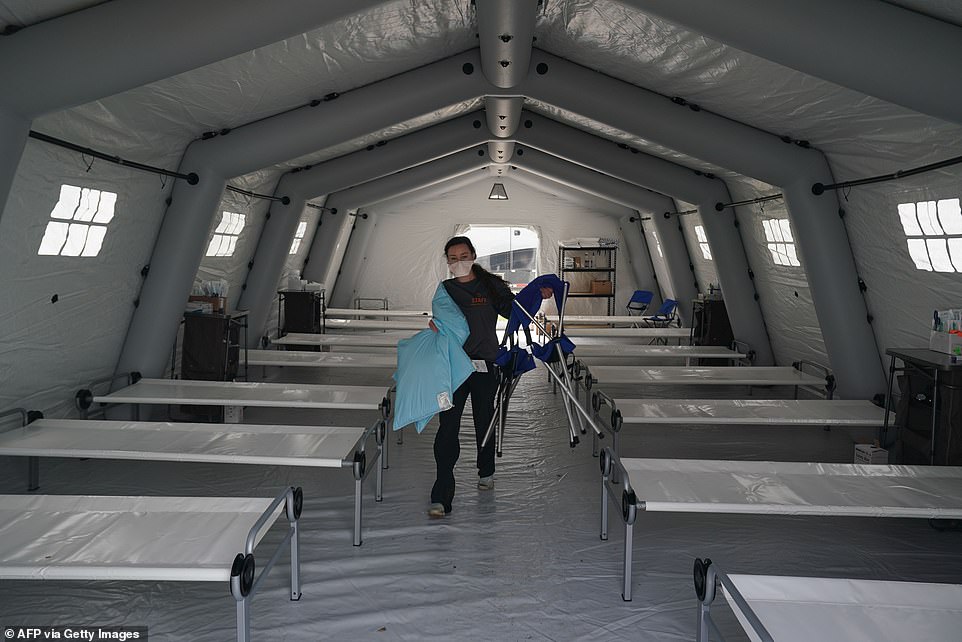 Beds are lined up in a tent as volunteers from the International Christian relief organization Samaritans Purse set up an Emergency Field Hospital for patients suffering from the coronavirus in Central Park across Fifth Avenue from Mt. Sinai Hospita 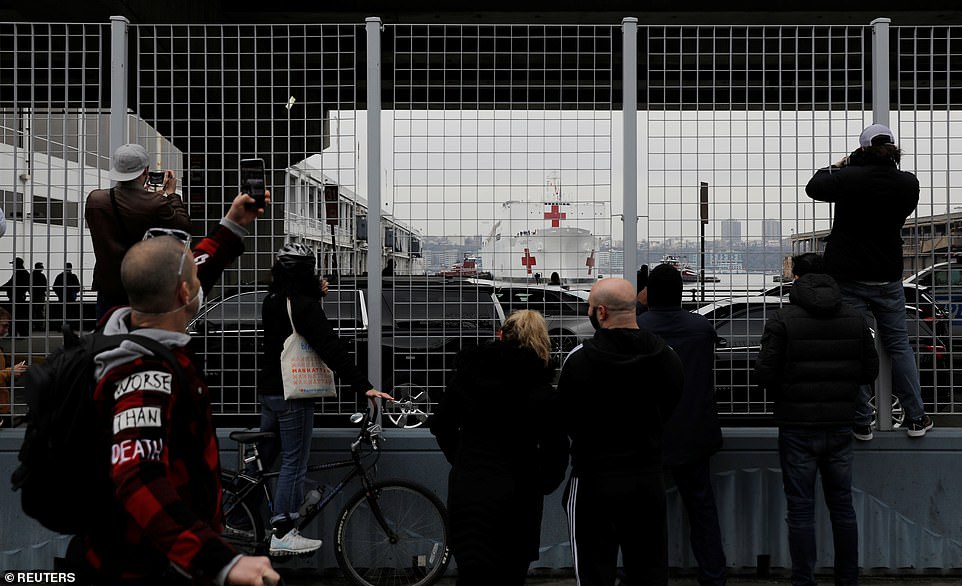 The USNS Comfort, a Navy hospital ship with 1,000 beds, 12 operating rooms and a full medical staff, arrived in the city on Monday. Dozens of people were spotted lining the river and not staying six feet away from each on Monday to watch the ship’s arrival 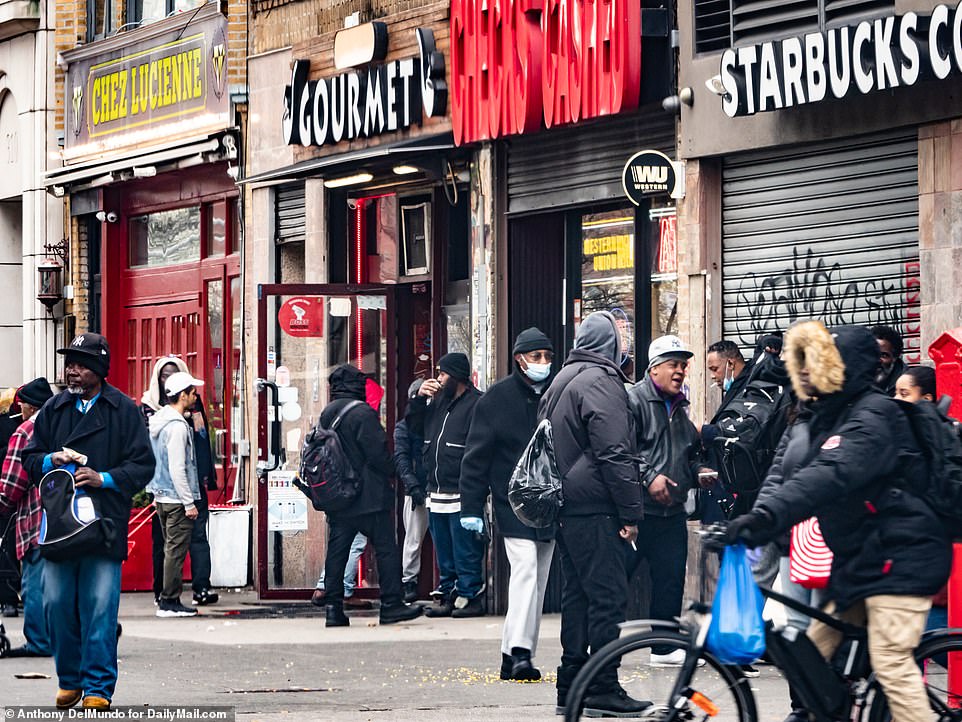 New York’s coronavirus pandemic could peak in 10 days: ER visits start to decrease despite rising death toll – and state cases level off – as experts say the city could soon ‘turn the corner’ and ‘mitigation is working’

New York could reach its peak of new coronavirus cases within the next seven to 10 days, experts say, as the number of hospital ER visits starts to decrease and official data raises hopes that the city could soon start ‘turning the corner’.

New York City saw 138 deaths from the virus on Monday, an increase of 17% on Sunday but well down from Saturday’s spike of 222 deaths.

There were 4,319 new cases, which is again lower than Saturday’s 5,367 new cases, according to official city figures.

Across New York state, the official number of new cases has fallen two days in a row.

The number of new cases in the state dipped by 19% from Sunday to Monday, falling from 7,157 to 5,818. It was also down from slightly from Saturday to Sunday.

The state death toll increased by 253 (26%) to 1,218 fatal cases on Monday. However over the past three days the number of daily deaths has remained almost flat, with an increase of only six deaths per day from Saturday to Monday.

Experts say the figures offer a glimmer of hope that hardest-hit New York could soon be ‘turning the corner’ and headed towards a downward trajectory in terms of coronavirus cases.

Doctor and analyst Scott Gottlieb said: ‘More data suggesting that New York could be approaching a peak in new cases. Over the next 7-10 days they could peak and start slowly turning the corner. Mitigation is working in New York.’ 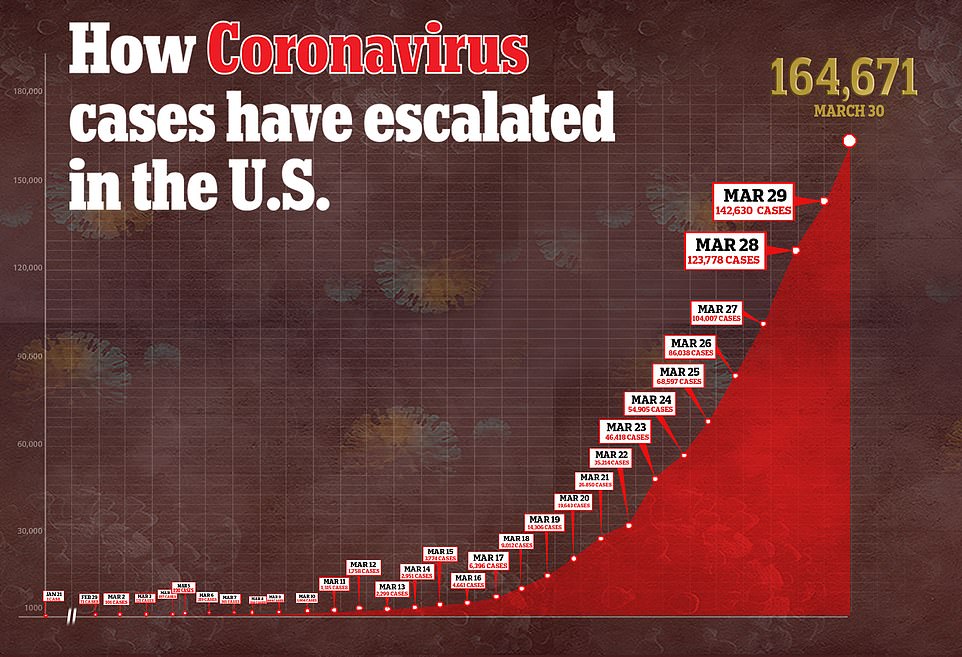 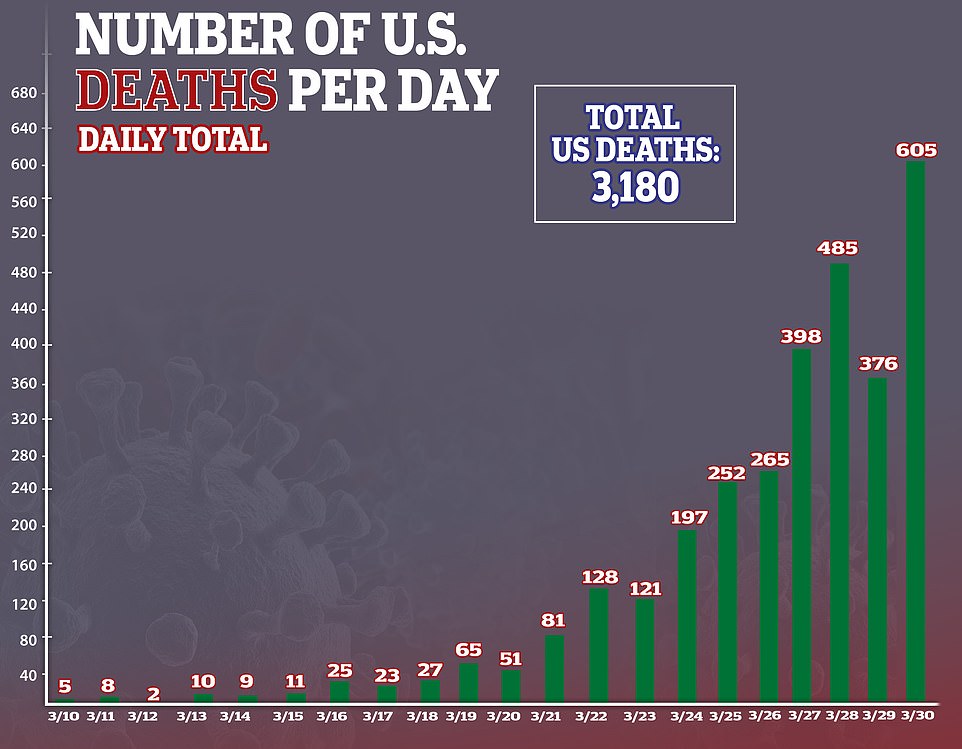 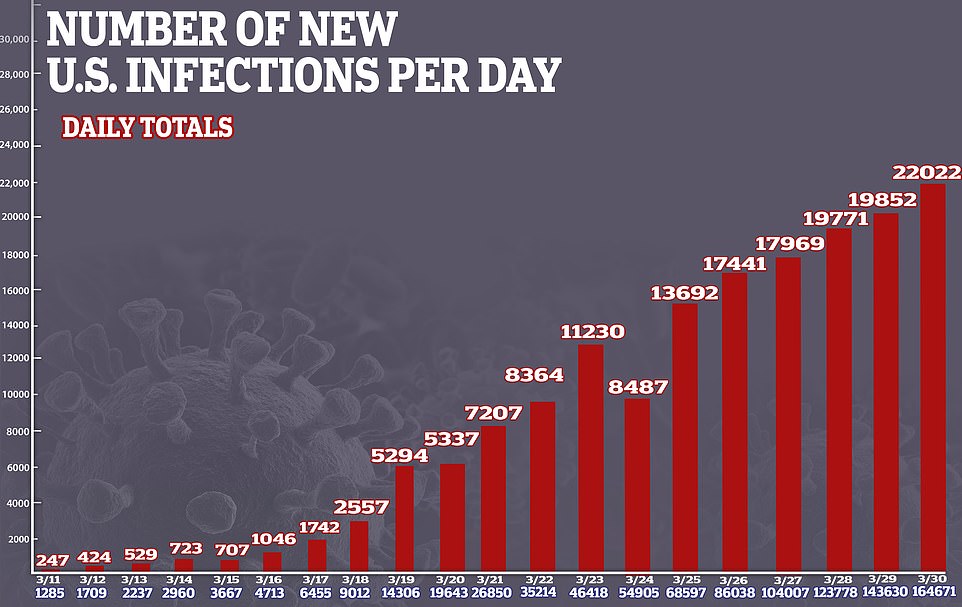 However the figures should be treated with caution given that in Italy initial signs that the daily death toll was flattening turned back into a daily increase. Governor Cuomo and Bill De Balsio have also painted a grim picture of days to come.

Deaths in New York are expected to peak within seven to 10 days, according to Farzad Mostashari, the founder of healthcare startup Aledade and a former national coordinator for Department of Health and Human Services.

Visits to hospital emergency rooms in New York City showed a decline in numbers over the weekend, Mostashari says, which puts hospitalizations on a downward trend and shows signs the state’s stay-at-home order is working.

State officials expect the number of deaths in New York to continue to rise as the outbreak reaches its projected peak in the coming weeks.

‘Whatever the numbers is, it’s going to be staggering,’ New York Governor Andrew Cuomo said. ‘We’ve lost over 1,000 New Yorkers… To me, we’re beyond staggering already.’

He said the rise in the number of new coronavirus infections appeared to be slowing and the hospital discharge rate was increasing.

‘People come into the hospital, they stay for a period of time, a number of days, and then they move on,’ Cuomo said.

The state has already confirmed more than 66,000 cases, mostly in New York City. There are 9,500 people in New York currently hospitalized for COVID-19.