Britain has announced another 616 coronavirus victims today, taking the total number of fatalities in the UK to 18,783.

Another 4,583 people have tested positive for the virus in the past 24 hours, meaning 138,078 have now been officially diagnosed. The number of positive tests has remained stable this week and appears to be plateauing.

NHS England confirmed a further 514 people have died with COVID-19 and another 102 deaths were announced across Scotland, Wales and Northern Ireland.

The Government had hoped to keep the number of victims to 20,000 or lower but recent trends suggest the UK will hit that by Sunday counting hospital deaths alone.

And data is increasingly showing huge numbers of people are dying in care homes but, in Britain, not being counted until a fortnight later. World Health Organization research has found half of all COVID-19 deaths are happening in nursing homes, signalling the UK’s death toll is set to surge when backdated data catches up.

Britain’s update comes as rifts are emerging in Government over how the UK will start to move out of its lockdown state when the coronavirus infection rate falls.

Conservative MPs have warned the Government it must trust the public and spell out how and when the nationwide shutdown will start to ease off.

Scottish First Minister Nicola Sturgeon, who gives her daily briefings hours before Downing Street, today said she does not expect normality would return this year.

She indicated she was willing to ease restrictions without Whitehall’s approval but said vulnerable people would continue to be shielded and large gatherings of people would not be allowed ‘for some months to come’.

Testing will be key to moving forward from the epidemic, experts say, and the Department of Health today at last announced it will start ongoing population testing as well as backward-looking antibody tests, known as ‘have you had it’ tests. 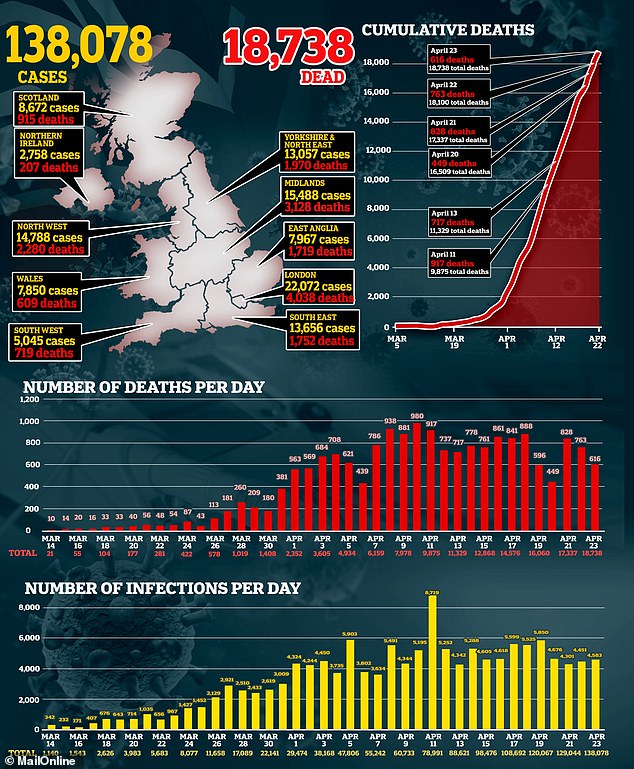 NHS England today announced that the 514 patients who had died in its hospitals were aged between 31 and 100 years old.

Sixteen of them, the youngest of whom was 37, had no other health problems before they caught the coronavirus.

The biggest proportion of the deaths announced today – 216 of them – happened on Tuesday, April 21, while 111 happened yesterday and 75 on Monday.

April 8 remains the deadliest day of the outbreak so far and is believed to have been the peak. NHS England now says 831 people died in its hospitals on that date.

Coronavirus is killing people more than a decade before they would have died naturally, according to a study.

Men who die of COVID-19 are losing, on average, 13 years of their lives, scientists say, while women have 11 years cut off their life expectancy.

The disease, which has hospitalised more than 100,000 people in the UK, is having a devastating impact comparable to heart disease, the scientists said.

The research was done by Public Health Scotland and experts at the universities of Glasgow and Edinburgh.

It flies in the face of authorities’ focus on the ‘underlying health conditions’ of most of the people dying of COVID-19.

And it goes against claims many of the victims are people who were likely to have died anyway.

Office for National Statistics data shows that most people dying in the UK are aged between 75 and 84.

The Scottish research argues that many of those could have expected years and even more than a decade more life if they hadn’t caught the virus.

Even people with long-term illnesses – known as morbidities – are having their lives cut short by many years, they said.

The scientists, led by the University of Glasgow’s Dr David McAllister, wrote: ‘While media coverage of the pandemic has focused heavily on COVID-19 affecting people with “underlying health conditions”, adjustment for number and type of long-term conditions only modestly reduces the estimated years of life lost due to COVID-19.’

April 10, meanwhile, was the day on which the Department of Health announced the most deaths (980).

This was the biggest single-day announcement of hospital deaths of any country in Europe since the pandemic began.

Today’s figure is 37 per cent lower and represents the next step in what increasingly seems to be a downward trend.

Professor Jim Naismith, a biologist at the University of Oxford, said: ‘The reduction in deaths and drop in the pressure upon hospitals are a welcome respite.

‘As deaths continue falling, we need to remember this is only the first round. When all the deaths are counted, this first wave of COVID-19 will have brought tragedy to families across the UK.

‘We owe it to those families to learn the right lessons from this awful experience and do better.’

The Government last week said the current lockdown, in which people are not allowed to leave their homes except for shopping, exercise and medical appointments, will continue at least into early May.

But some ministers are losing patience and urging Whitehall to give reassurances about when the public might be able to return to work.

They said it is ‘silly’ for the Government not to be totally frank with the public given how well most of the population has stuck to social distancing measures.

They stressed ‘there has got to be an economy to go back to’ as they sounded a warning which will be heard loud and clear in Downing Street.

Treasurer of the Government’s 1922 Committee, Geoffrey Clifton-Brown, today suggested a comprehensive plan must be set out within the next month or many businesses ‘are likely to cease trading’.

However, in a sign tensions are likely to rise, Dominic Raab said last night it would be weeks before ministers even think about putting forward an exit strategy.

Chief medical officer, Professor Chris Whitty, admitted some restrictions are likely to be in place for the ‘next calendar year’.

There have been signs in recent days that some people are beginning to tire of the curbs on daily life with photographs showing more people on the UK’s roads and in the nation’s parks.

It came as it emerged the Government is pressing ahead with plans to set up a 15,000 strong contact-tracing army alongside its plans for community testing.

It will be based on the system used in South Korea which has successfully managed to minimise its own outbreak through the use of extensive contact tracing of people who have become infected.

The World Health Organization (WHO) announced today that residents in long-term care facilities account for up to half of coronavirus-related deaths in Europe.

Hans Kluge, WHO regional director for Europe, said there was a ‘deeply concerning picture’ emerging of the impact COVID-19 is having on those in care.

He told a press conference on Thursday that the way some care facilities operate is ‘providing pathways’ for the virus to spread within the population.

Dr Kluge said: ‘According to estimates from countries in the European region, up to half of those who have died from COVID-19 were resident in long-term care facilities. This is an unimaginable human tragedy.’

Asked how many of Europe’s care home deaths were from the UK, Dr Catherine Smallwood told the briefing the WHO has not yet been provided with the latest up-to-date figures.

The sentiments echoed those shared by the Government’s Chief Medical Officer, professor Chris Whitty, who said he was ‘sure we will see a high mortality rate sadly in care homes, because this is a very, very vulnerable group’.

He told reporters on Wednesday that the 826 deaths reported in England and Wales by the Office for National Statistics (ONS) in the week ending April 10 were ‘an underestimate’.

These latest figures bring the total number of Covid-19 care home deaths since the start of the outbreak to 1,043.

Care home bosses have expressed concerns over acquiring personal protective equipment (PPE) and testing, and one said that some types of equipment are up to 24 times more expensive than they were before the pandemic.

Dr Kluge said that PPE should be provided, and testing of any suspected cases in care facilities should be ‘prioritised’.

He said that staff working in care homes need to start being paid ‘appropriately’, as they are ‘often overstretched, underpaid and unprotected’.

Dr Kluge also told the briefing that 50 per cent of the world’s COVID-19 cases – over 1.2 million – have been recorded in Europe and more than 110,000 people have died.