Latest News
Home /Teenager, 19, is charged with murder of father-of-one

A teenager has been charged with the murder of a father-of-one who was stabbed to death in the West Midlands during a weekend of bloodshed.

Tyrell Harris, 19, from West Bromwich, has been remanded in custody to appear before magistrates in Wolverhampton tomorrow over the death of Karl Gallagher.

The 31-year-old suffered a stab wound to his heart in a knife attack outside West Cross Shopping Centre in Smethwick at around 4.40pm on Sunday.

Despite the best efforts of medics, Mr Gallagher was pronounced dead at the scene, with a post-mortem examination due to take place later. 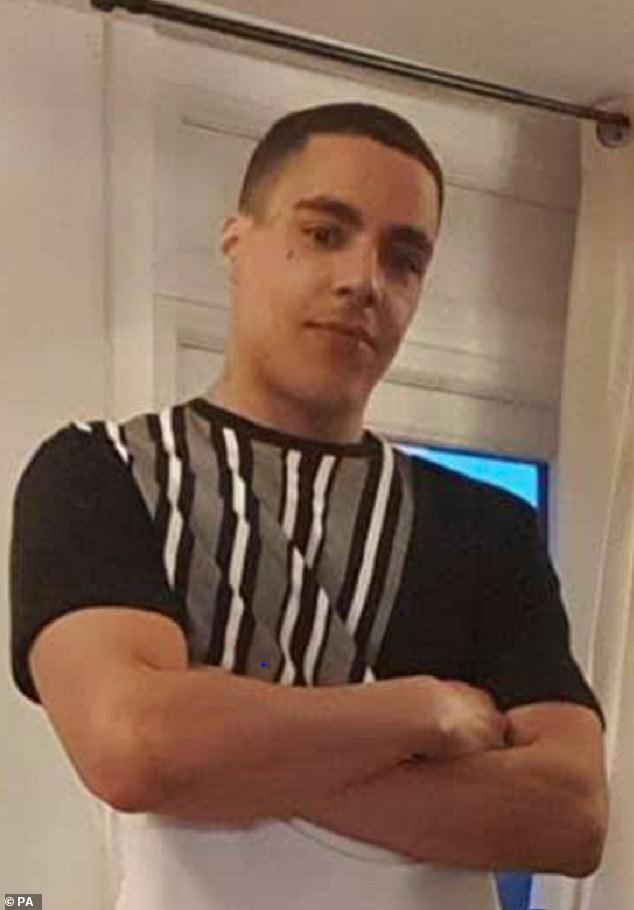 Tyrell Harris, 19, from West Bromwich, has been remanded in custody to appear before magistrates in Wolverhampton following the death of Karl Gallagher (pictured)

Police today confirmed three other men who were arrested on suspicion of murder have been released on bail while the investigation continues.

In a tribute released through the police, Mr Gallagher’s family said: ‘Karl was a very dearly loved son, brother, nephew, cousin and partner.

‘He was also a proud and loving father. His friends and family are devastated.’

Detectives have warned people not to share footage of the stabbing, which has been widely posted on Twitter, as they may be committing an offence.

Officers have raided six addresses since Mr Gallagher’s death and are continuing to examine CCTV and mobile phone footage. 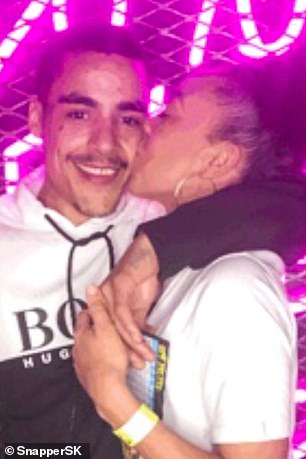 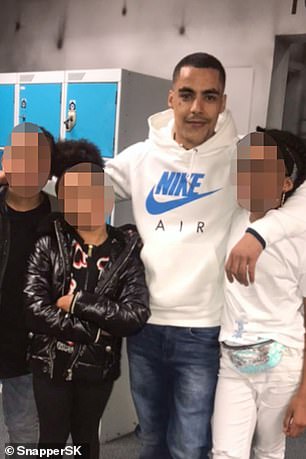 Mr Gallagher (pictured) suffered a stab wound to his heart after a knife attack outside West Cross Shopping Centre in Smethwick at around 4.40pm on Sunday 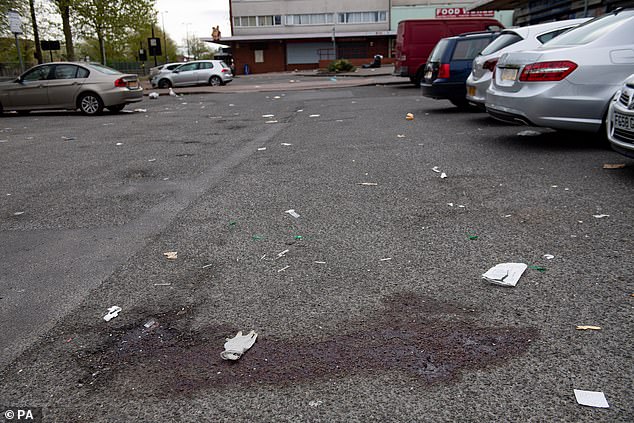 Pictured: Stains mark the ground after Mr Gallagher’s death outside the West Cross Shopping Centre in Smethwick on Sunday

Detective Chief Inspector Jim Munro, of West Midlands Police, said yesterday: ‘We’ve made significant progress over the past 24 hours and are building up a clearer picture of the events of Sunday afternoon.

We’re very much aware that video has been widely shared on Twitter. We have contacted them and have asked them to remove it, but to date we know that the footage remains visible.

‘I’d urge people not to share the footage, and to report it to Twitter whenever they see copies of it.

‘It’s very distressing for Karl’s family to know that his final moments have been viewed hundreds of thousands of times. 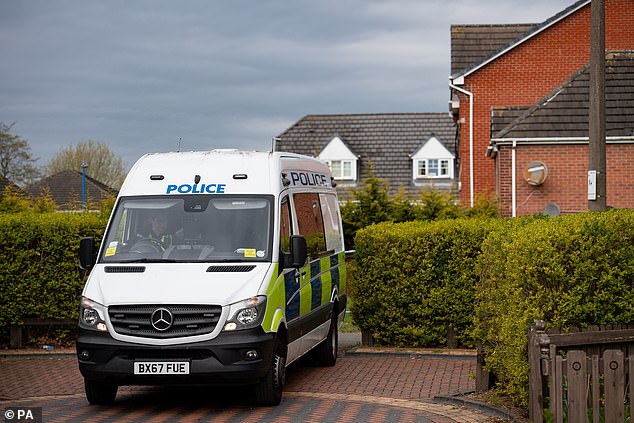 Pictured: Police near the scene in Smethwick after the father-of-one was killed on Sunday 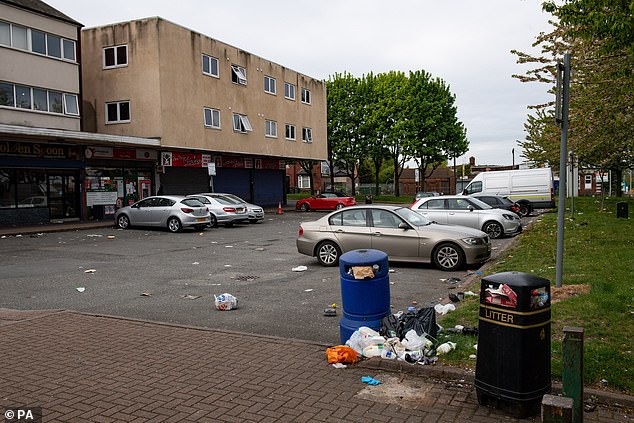 Detectives have warned people not to share footage of the stabbing, which has been widely posted on Twitter, as they may be committing an offence

‘It’s also important to remember that proceedings are now active, and that anyone who does share it is potentially committing a criminal offence.’

The Smethwick attack was one of a series of violent confrontations to take place over the weekend, which left three people dead and a 16-year-old boy fighting for his life.

Hospital worker David Gomoh, 24, was fatally wounded in a knife attack on Sunday, seconds after leaving his home in Canning Town, east London.

Mr Gomoh was a supply chain worker for the NHS at St Bartholomew’s Hospital in London, while his mother Marian works as a labour ward matron at Newham University Hospital. 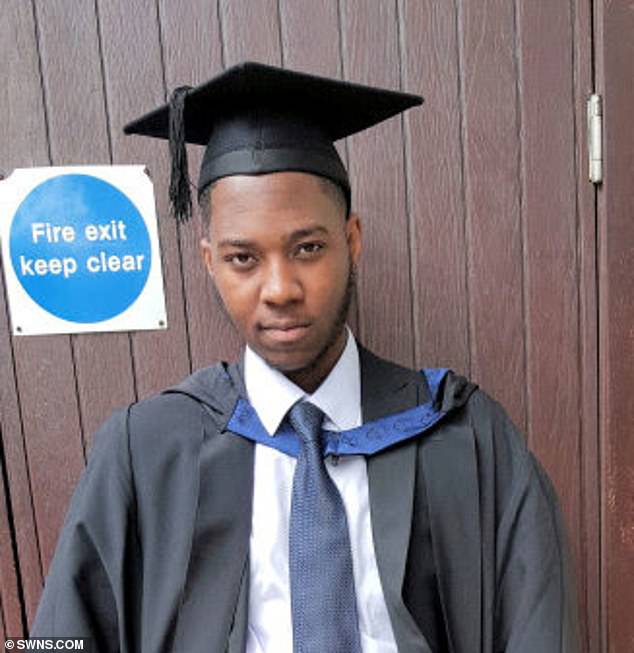 His tragic death came days after the death of his father Ken, who is thought to have died from COVID-19, with the family due to hold the funeral tomorrow.

Mr Gomoh had just left home on Sunday evening and was attacked by a masked gang barely 100 metres away at 10.25pm.

He managed to return to his family’s terrace home shouting for help and neighbours, hearing the commotion, ran out and administered first aid.

Also on Sunday, a 14-year-old boy was arrested on suspicion of attempted murder after two teenagers were stabbed in broad daylight in Solihull.

Dramatic footage of the incident shows a group of youths fighting near Marston Green Park moments before the attack.

A 16-year-old boy was rushed to hospital in a critical condition and a 19-year-old victim was at the time said to be stable.