This is the brazen moment a PCSO’s bike is stolen as he tries to disperse a mob of covidiots in a park during lockdown.

The footage, taken in Godolphin Playing Fields, Slough on Monday, shows a Police Community Support Officer confronting a group of around ten people who had gathered in the open space to play cricket.

As he explains the importance of current restrictions on public gatherings, one of them grabs his bicycle and starts running off – as the person filming advises him to ‘take the stand down’.

The cameraman then taunts the humiliated PCSO, saying ‘you just got robbed!’ as the group around him laugh and jeer.

The officer called for backup which was then deployed, but the men, believed to be aged in their late teens or early twenties, made off from the scene leaving the PCSO’s bike behind.

Thames Valley Police praised the PCSO for his ‘professionalism and great constraint’ during the incident – and the force is now appealing for witnesses.

Recent figures revealed that police handed out more than 9,000 fines to people in England and Wales for flouting coronavirus lockdown laws – including 397 repeat offenders. One was given six fixed penalty notices in the past month.

Eight out of ten fines were given to men – and 54 per cent of those who flouted the rules were aged between 18 and 29. 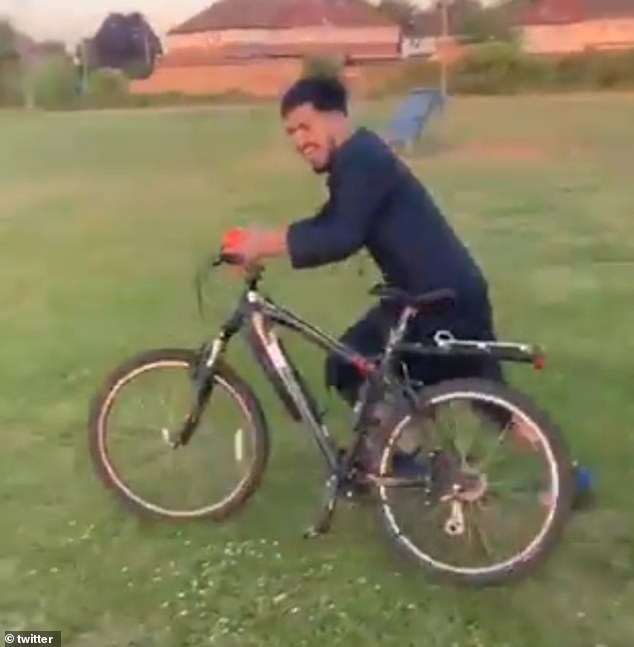 As the PCSO speaks to the young men, one of them grabs his bicycle and starts running off – as the person filming advises him to ‘take the stand down’

The National Police Chiefs’ Council (NPCC) said 8,877 tickets were handed out by forces in England between March 27 and April 27, while 299 were issued in Wales over the same period.

These peaked over the Easter weekend with an average of 500 fines per day issued as temperatures reached 79F (26C).

In other revelations in lockdown Britain:

In the bicycle theft footage, as the support officer raises his palms in disbelief, he is met with taunts of ‘do we go home?’ in a high-pitched tone.

The person filming says: ‘Go home, how are you going to get home, officer? Where’s your bike?’

One the group says: ‘Look how many cameras there are around you right now’.

One of those gathered in the field taunts: ‘Daddy pig says go home.’

Another of the group says: ‘Leave it man, he’s about to cry, man.’

Video of the incident was shared online, bringing in more than 150,000 views. 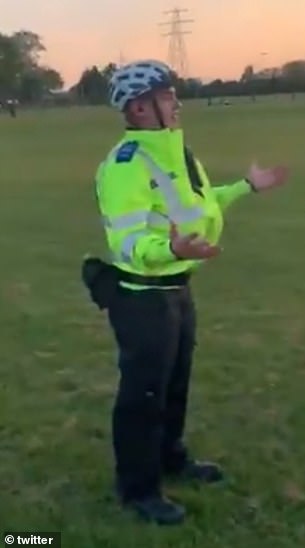 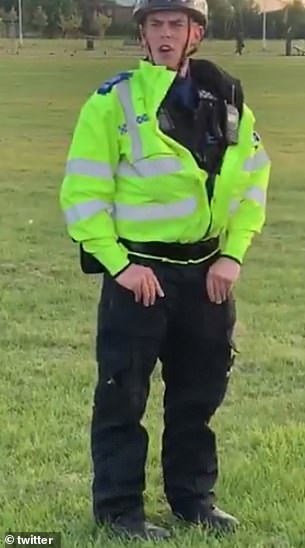 As the support officer raises his palms in disbelief, the person filming says: ‘Go home, how are you going to get home, officer, where’s your bike?’

Sumayah Akhtar, who posted the footage, branded the incident ‘the most disgusting thing [she has] seen’.

‘This guy is doing his job, advising you guys to stay home for you and your families’ health,’ she added.

What ARE the lockdown rules?

Regulation 6 of the The Health Protection (Coronavirus, Restrictions) (England) Regulations 2020 states no person may leave the place where they live without a reasonable excuse.

The National Police Chief’s Council has released its interpretation of what constitutes a ‘reasonable excuse’:

It classifies explains its interpretation of how the law relates to everday activities.

It defines activites that are likely to be reasonable as:

– Buying several days’ worth of food, including luxury items and alcohol.

– Exercise including: going for a run or cycle or practicing yoga. Walking in the countryside or in cities. Attending an allotment.

– Stopping to rest or to eat lunch while on a long walk.

It defines activities that are ‘not likely to be reasonable’ as:

– Buying paint and brushes, simply to redecorate a kitchen

– A short walk to a park bench, when the person remains seated for a much longer period

– A person who can work from home choosing to work in a local park.

By way of explanation on each area it adds:

Shopping – There is no need for all a person’s shopping to be basic food supplies; the purchase of snacks and luxuries is still permitted. In general terms, a person has a reasonable excuse to visit the shops which remain open to customers under the Regulations.

If a person is already out of the address with good reason, then it would not be proportionate to prevent the person from buying nonessential items. Food could include hot food from takeaways.

Exercise – Exercise must involve some movement, but it is acceptable for a person to stop for a break in exercise. However, a very short period of ‘exercise’ to excuse a long period of inactivity may mean that the person is not engaged in ‘exercise’ but in fact something else.

The regulations specify maintenance and upkeep. This does not extend to renovation and improvements.

‘Imagine in Ramadan not being able to have a drop of respect in you. Also, if lockdown doesn’t get released it’s thanks to the boys like this.’

Commenters were broadly in agreement, hitting out at the group for their ‘disrespectful’ and ’embarrassing’ behaviour.

One said: ‘They are shouting profanities at him in their language. As a Muslim we must have [decency], specially for elders. I blame their parents for raising such uncouth and disgusting creatures.’

Another simply said: ‘Shame on those fools’.

Superintendent Gavin Wong, Local Policing Commander for Slough, said: ‘The behaviour displayed against my officer will not be tolerated by Thames Valley Police and we are investigating this incident fully.

‘We are fully committed to supporting the fight against the coronavirus in order to save lives, and we need to remember that officers on the front line put themselves at risk in order to do that.

‘I know the local community will be embarrassed by the actions of a small number of people because the vast majority of people understand what is required and have complied with the rules around Coronavirus. I am grateful that the PCSO was not injured and he is being supported by the force.

‘He showed professionalism and great constraint during the incident.

‘We are particularly wishing to trace a man who is Asian, with a thin beard and moustache, short dark cropped hair, wearing what appears to be a black traditional robe, and black sliders.

‘Thames Valley Police and our officers are out in the community engaging and encouraging people to stay at home to protect the lives of everyone from the spread of Coronavirus. The behaviour shown towards our PCSO is completely unacceptable. He is being supported by the force.

‘Further to this, our officers returned to the playing fields yesterday (5/5) and found a group of men again playing cricket. They attempted to run off but they were detained and issued with fixed penalty notices’.

Anyone with information should call 101 quoting reference 43200131991 or you can go online and report or if you wish to report anonymously you can do so through Crimestoppers on 0800 555 111.

There were 8,877 fines in total between late March and April – with the most handed out in Lancashire