The glorious bank holiday weather has come to a frosty end with temperatures plummeting by 12 degrees and 50mph icy winds battering parts of the country.

In what is expected to be the hottest day of the year, Saturday brought temperatures of 26C (78.8F) causing many Britons to break coronavirus lockdown rules by flocking to parks in droves.

But barbecues should be swiftly packed away as an Arctic blast sweeps the nation today causing temperatures to plunge by eight to 12 degrees with up to 50mph gusts expected in the most exposed areas.

The glorious bank holiday weather has come to a bitter end with temperatures plummeting by 12 degrees and 50mph winds battering parts of the country. Pictured: Fields in Nethy Bridge in the Scottish Highlands were covered in snow

Certain areas will see lows of just three degrees with frosty nights expected for much of the week ahead. Pictured: Tomintoul, Scotland, also saw snow 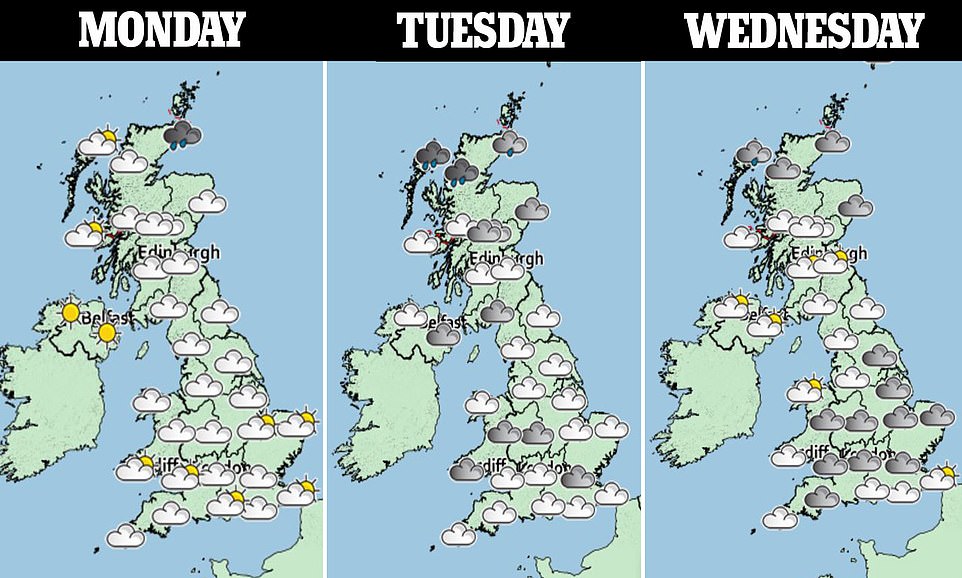 Rain is expected to first move in over southern Scotland, Northern Ireland and northern England today before slowly moving southwards, according to the Met Office 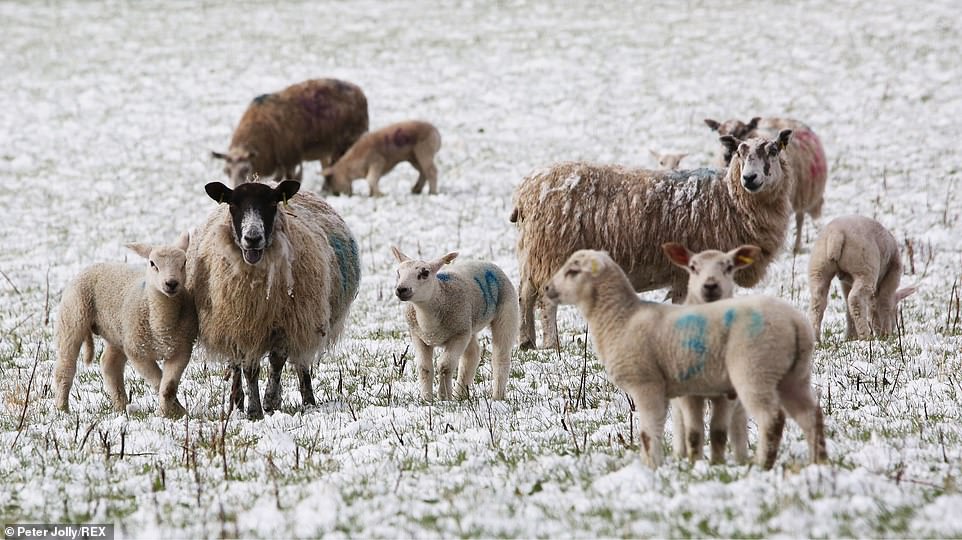 The snowfall made it look like December in Tomintoul, Scotland. Pictured: Sheep and their lambs in the snow 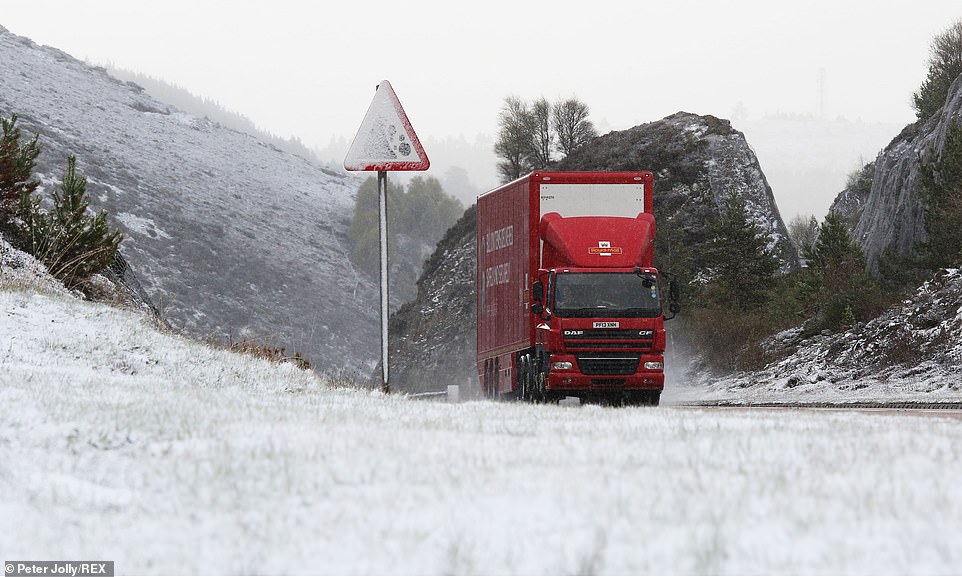 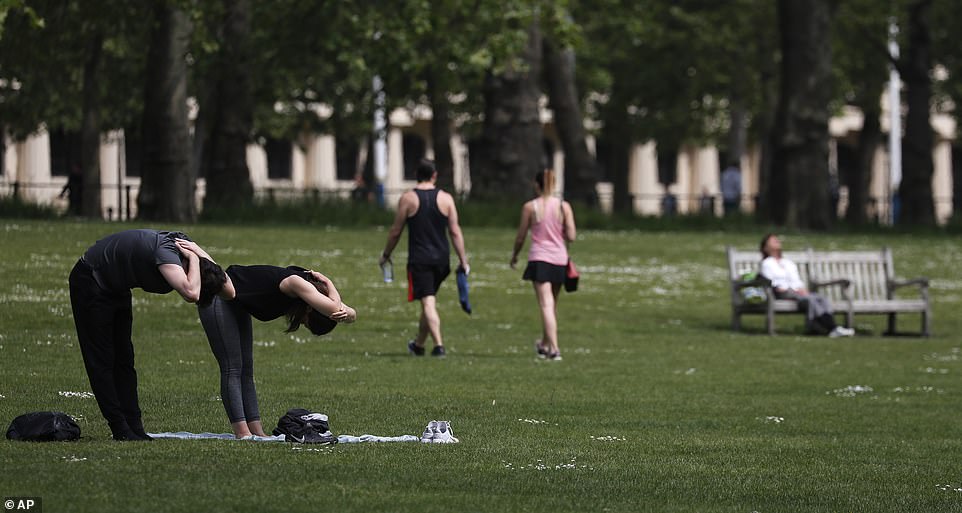 In stark contrast to icy scenes in the north, the south of England is still basking in glorious sunshine with Londoners pictured using parks 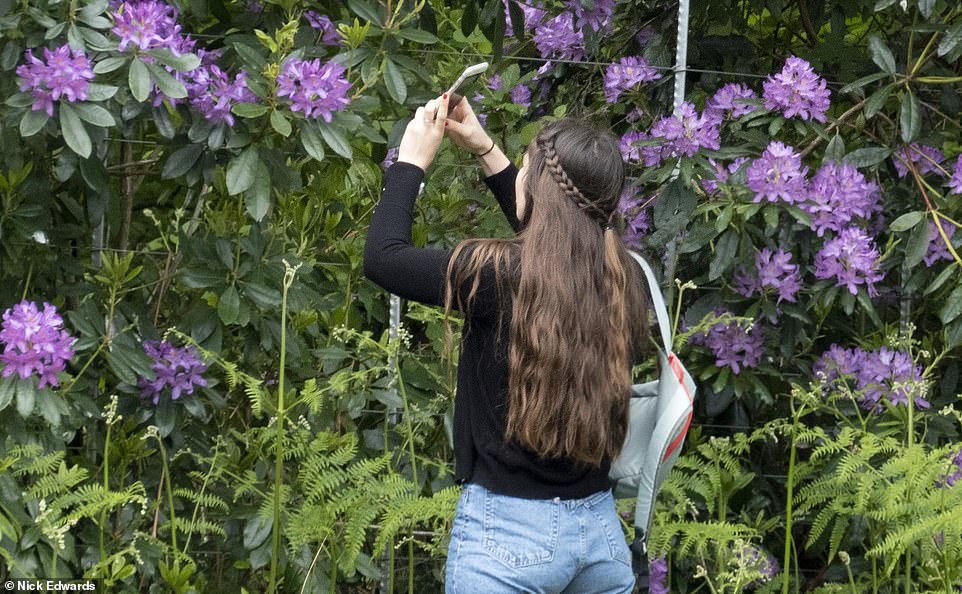 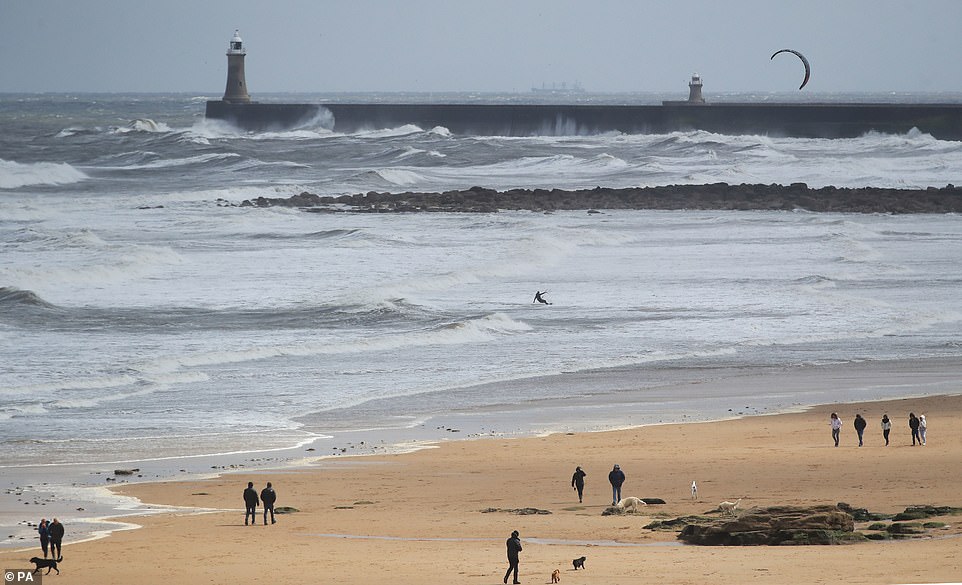 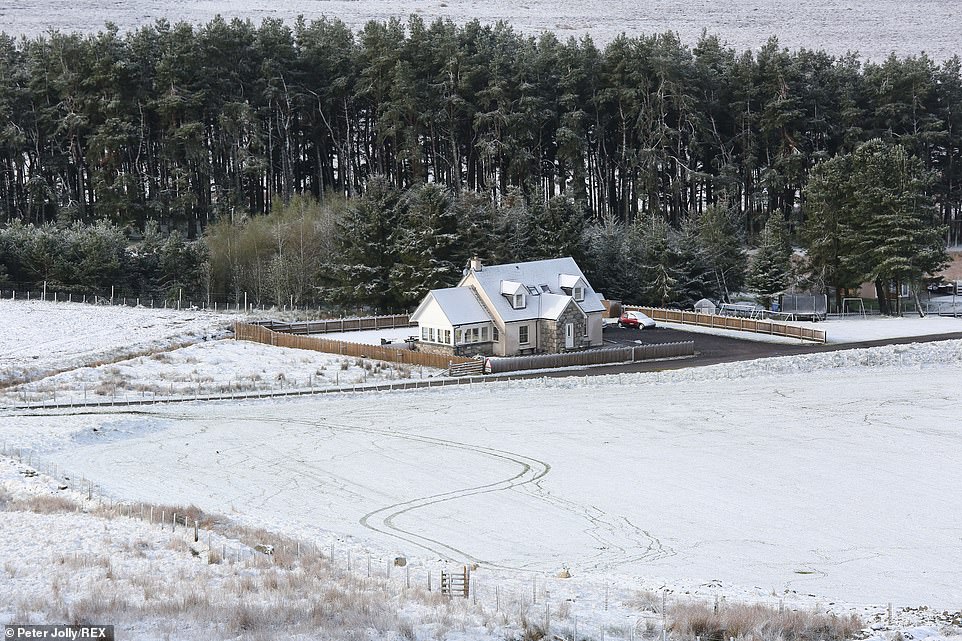 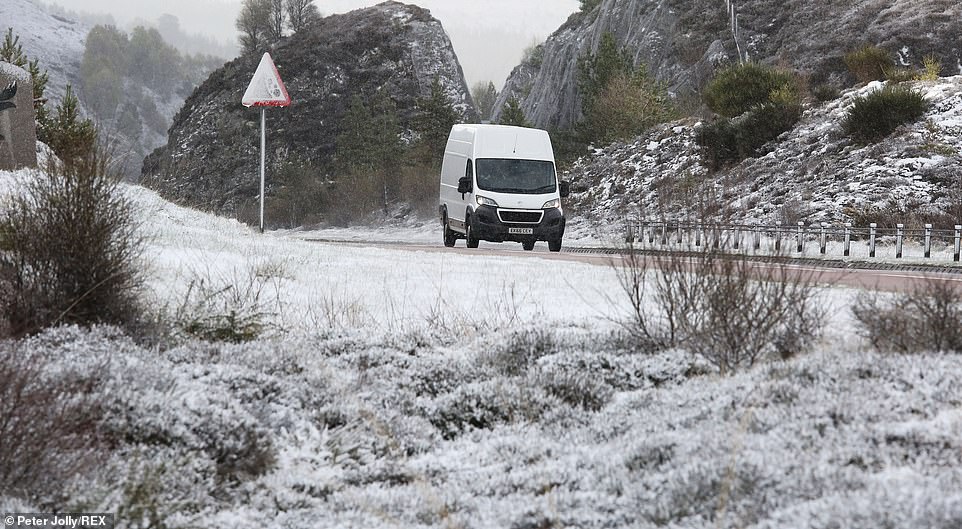 Fresh snowfall created treacherous driving conditions near Inverness. The Arctic blast is set to bring cooler temperatures to much of the UK

Certain places will see lows of just three degrees with frosty nights expected for much of the week ahead.

Parts of Scotland have already been hit by an icy front with pictures showing snowfall in the highlands.

In stark contrast to this, the south of England is still basking in glorious sunshine with Londoners pictured using parks and outdoor spaces to enjoy the warm weather before the cold front moves in.

Met Office meteorologist Steven Keates told MailOnline: ‘We will see an eight to 12 degree drop in temperature day on day. 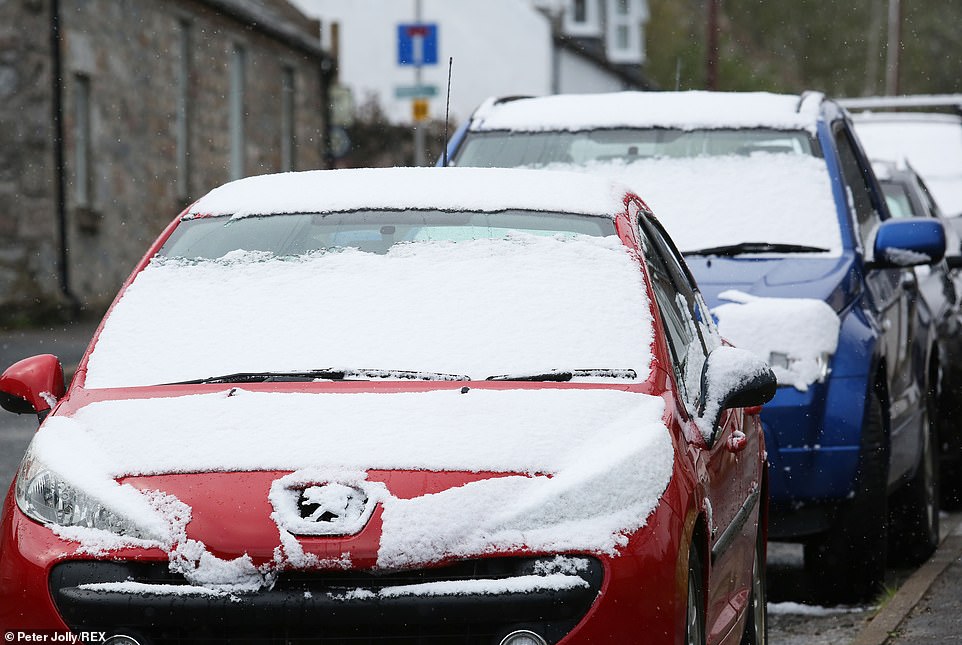 Snow coated cars in the village of Tomintoul in Scotland. The icy weather marks the start of a week of cooler temperatures across much of the UK

‘There is some exceptionally cold air for the time of year. In northern Scotland for example today, temperatures wont get much higher than three or four degrees (37.4 to 39.2F).

‘It is going to feel particularly cold out there but this is all offset by May sunshine.’ 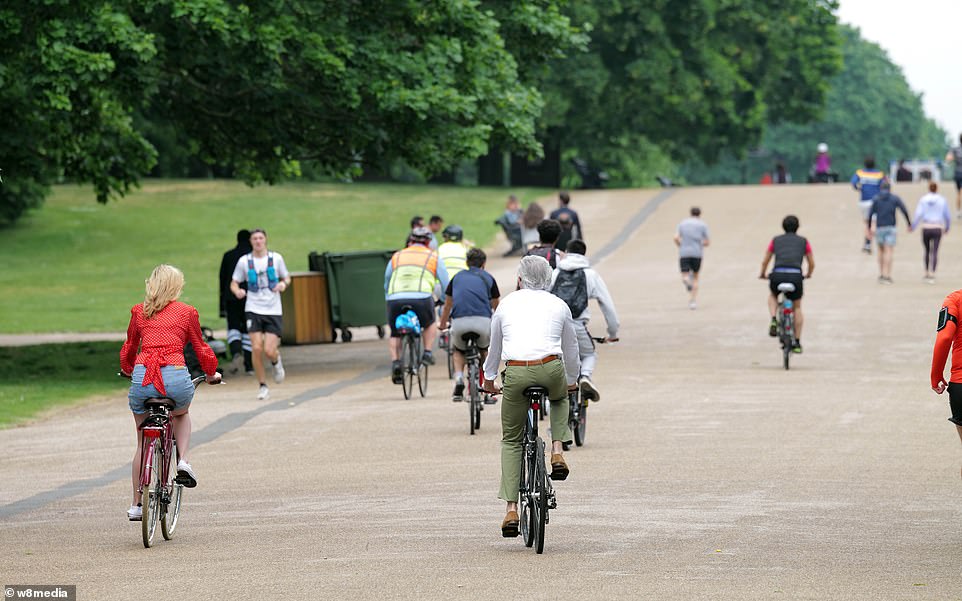 Londoners were seen outdoor spaces to enjoy the warm weather before temperatures drop as the week goes on. Pictured: Hyde Park

Rain is expected to first move in over southern Scotland, Northern Ireland and northern England today before slowly moving southwards, according to the Met Office.

Scotland and eastern England can expect wintry showers as the day goes on, but patches of rain should clear up across the south of the UK.

Monday will bring chilly winds to much of the UK, with northern Scotland and the eastern side of England seeing showers while frosty nights potentially continuing for much of the rest of the week.

The cooler weather comes ahead of Boris Johnson’s address to the nation at 7pm in which he is expected to relax some of the stricter lockdown measures.

A DefCon-style five stage system will be introduced to describe the country’s outbreak condition, with the UK currently being at the second most serious rating of four – meaning most of the lockdown must be maintained.

With evidence increasingly suggesting the virus spreads far less readily in the open air, the once-a-day limit on outdoor exercise will be dropped. 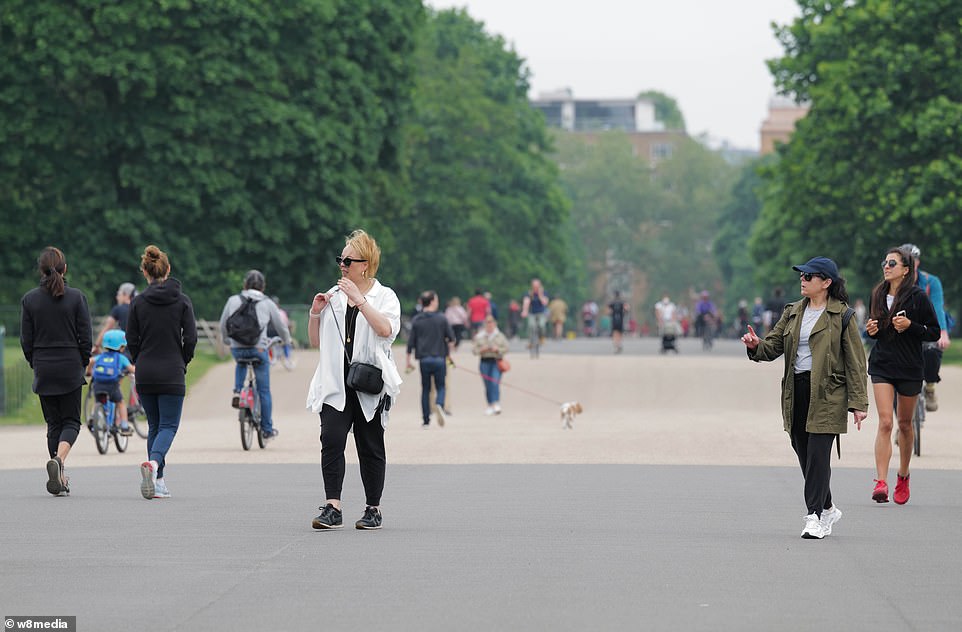 Londoners were seen walking around Hyde Park as temperatures remained warm. The weather is set to get cooler as the week goes on 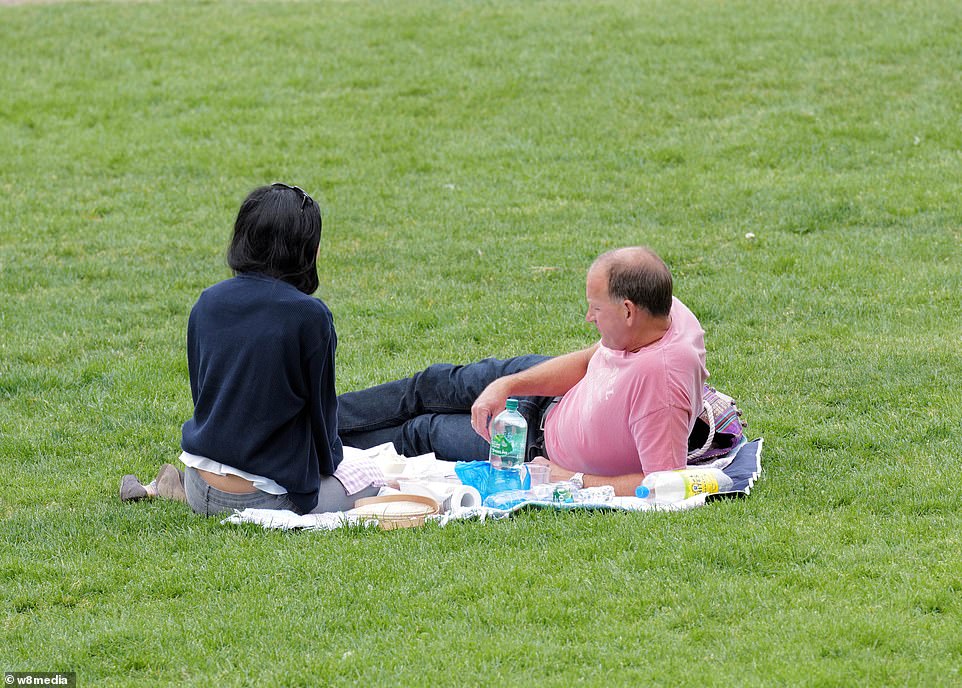 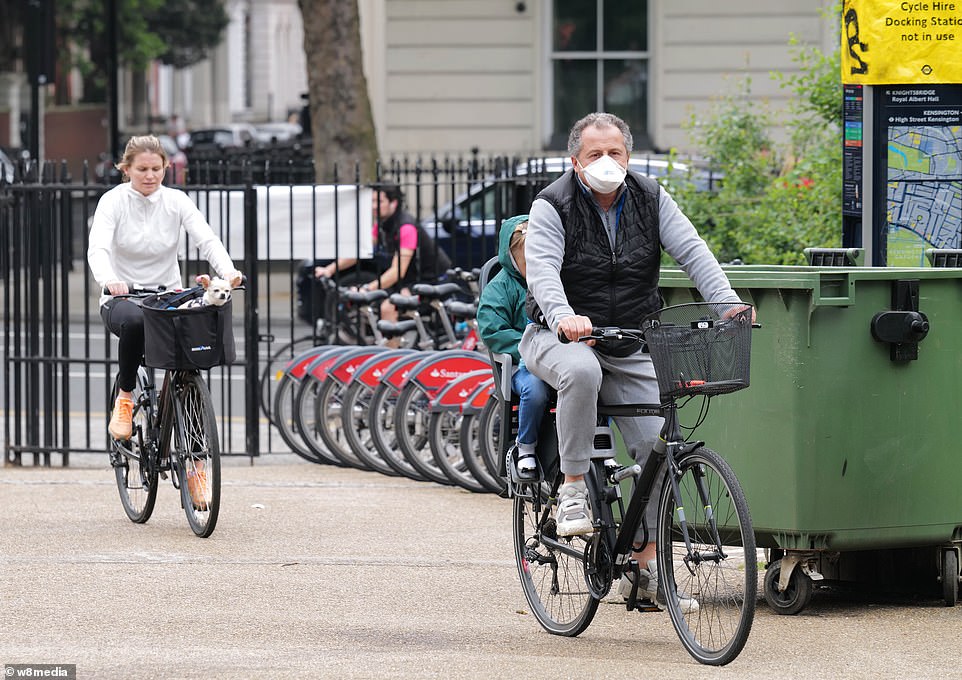 The focus will also shift to getting businesses up and running where possible, with detailed guidance for firms on how they should operate, and garden centres allowed to open from Wednesday where two-metre ‘social distancing’ rules can be put in place.

Travellers and shoppers could be urged to wear face coverings, as has already happened in Scotland.

Breaches of the more nuanced rules could be enforced with harsher fines, amid complaints from police that the enforcement so far has been ‘wishy washy’.

Plans are being drawn up to use ‘peer pressure’ to get people to self-isolate, as those who test positive will be told to get in touch with anyone they might have infected.