By Harry Cole Deputy Political Editor For The Mail On Sunday

Britain’s chief European trade deal negotiator has warned the Cabinet that Brussels talks are heading for collapse and has put Ministers on notice to prepare for No Deal.

David Frost, who heads the Prime Minister’s ‘Taskforce Europe’, told Ministers to ‘take the moral high ground’ when speaking to their counterparts across the Channel in the face of stubbornness from Brussels. But he has also urged them to step up their planning in case talks over a new trading arrangement break down.

Downing Street is preparing to issue warnings that the UK is heading for an ‘Australia-style deal’ with the EU – which in reality means No Deal and tariffs on imported and exported goods under terms set by the World Trade Organisation.

After a ‘tetchy’ round of talks last week, Mr Frost admitted ‘very little progress’ had been made and he accused the EU of ideological intransigence. 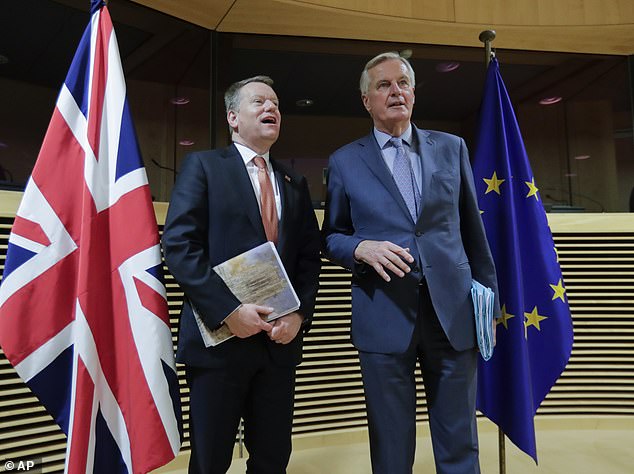 David Frost (left), who heads the Prime Minister’s ‘Taskforce Europe’, told Ministers to ‘take the moral high ground’ when speaking to their counterparts across the Channel in the face of stubbornness from Brussels. Boris Johnson is expected to tell the EU27 to set new rules for their chief negotiator Michel Barnier (right) or see any hopes of a deal fade

If progress is not made at the next meeting of UK and EU negotiators in 15 days, there is even talk in Whitehall of a British ‘walk out’ of the talks, which are currently being held online.

Boris Johnson is planning a major personal intervention in the efforts to forge a new trade relationship with the EU when he meets European Commission President Ursula von der Leyen next month, but hopes are fading for making much progress by then. 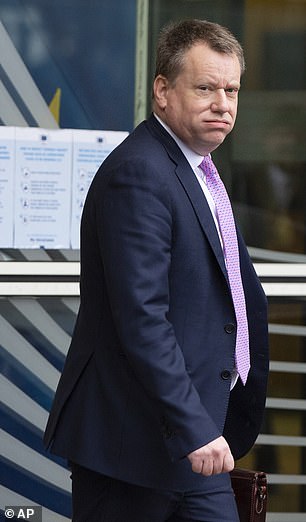 After a ‘tetchy’ round of talks last week, Mr Frost admitted ‘very little progress’ had been made and he accused the EU of ideological intransigence

Mr Johnson is expected to tell the EU27 to set new rules for their chief negotiator Michel Barnier or see any hopes of a deal fade.

Talks are currently stuck on the EU’s insistence that Britain signs up to reams of Brussels red tape that the EU calls ‘level playing field’ measures in a bid to make the independent UK less competitive to the bloc. As implementation of these rules would be overseen by the European Courts of Justice, the UK Government insists that the request is a non-starter.

The two sides are also deadlocked on sweeping demands from the EU to continue having the same access as now to UK fishing waters, a totemic Brexit debate issue that Mr Johnson has staked his political career on vowing to win.

Sources within the UK negotiating team also suggest that Brussels ‘aren’t happy’ with the UK’s insistence that there will be no extension to the trade talks process that will see Britain leave the transition period at the end of December this year.

One said: ‘They think we are just trying to run down the clock and will fold, but they need to realise we are not moving on this stuff.’

Mr Frost has described any possibility of jurisdiction by EU judges as ‘line in the sand’ Britain cannot cross.

A Downing Street source said: ‘They must understand no Government has, or would, sign up to commitments that would require EU oversight of the UK’s domestic legislation, and certainly not this Government, which was elected on precisely this point.

‘We’ve made very clear that such conditions would be unacceptable and can never form the basis of an agreement. 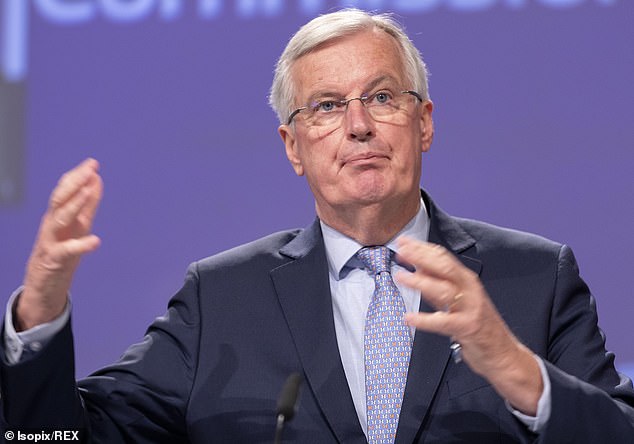 ‘Michel Barnier is doing his best. He must know that he has an impossible job with a mandate that in certain areas is totally non-negotiable with us and gives him no flexibility where he needs it.’

Mr Barnier has insisted that he is acting within a strict window set by EU member states so cannot offer any movement in the talks.

He said: ‘I’ve invited the UK to change tactics, to change strategy if they really do want to strike an agreement. There seems to be a real lack of understanding.’ But that claim has been met with short shrift in London.

A senior Government source said: ‘They always claim they are sticking to their mandate until suddenly they are not.

‘Barnier claimed last autumn that he had no mandate to ditch the backstop, yet he did just that.’

This week, Mr Frost will publish a raft of draft legal texts for a proposed deal in a last-ditch bid to get negotiations moving.