England, Scotland and Wales have announced a further 111 coronavirus deaths today on the first Sunday since draconian lockdown measures were eased.

The death tolls for Scotland and Wales include the number of deaths in care homes. The figures for England are hospital deaths only.

In Scotland, 90 more people tested positive for the virus while 162 more confirmed cases were reported in Wales.

If the figures stay as they are, this would mark a 58.7 per cent drop on last week’s death toll of 269. However Northern Ireland figures are still to be announced.

The current figure is not the official tally for the day which is likely to be significantly higher.

The numbers follow a tumultuous week for the Government in which approval ratings took a sharp dip after Prime Minister Boris Johnson set out his strategy for lifting lockdown measures.

Some 39 per cent of the nation are supportive of the Government’s handling of the crisis, down nine points on the 48 per cent recorded last week, while disapproval rose from 36 per cent to 42 per cent.

Yesterday, Education Secretary Gavin Williamson outlined the plans for reception, year 1 and 6 to return from June 1.

The plan faced mass criticism from from ministers, unions and local authorities alike with Labour MP Rachel Reeves stating this morning that the government ‘has got a lot more work’ to make sure parents and staff are confident about bringing students back. 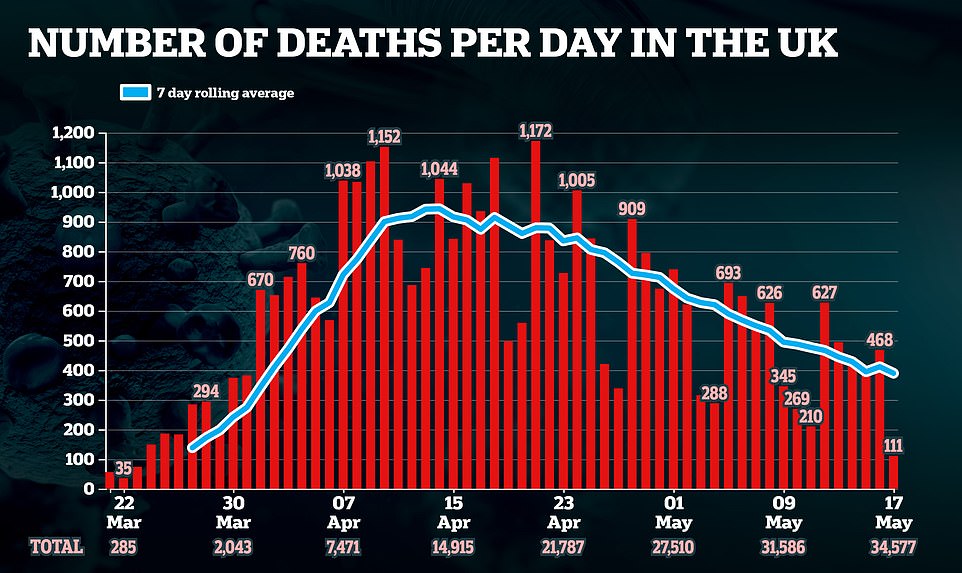 England, Scotland and Wales have announced a further 111 coronavirus deaths today on the first Sunday since draconian lockdown measures were eased 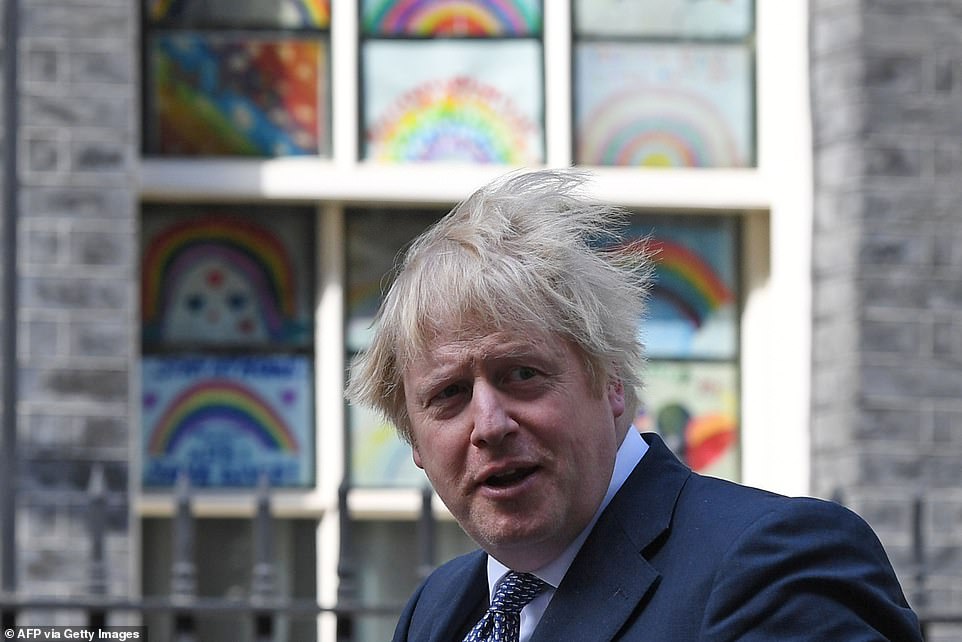 Scotland and Wales have announced a further 21 coronavirus deaths today. The figures follow a tumultuous week for the Government in which approval ratings took a sharp dip after Prime Minister Boris Johnson (pictured) set out his strategy for lifting lockdown measures 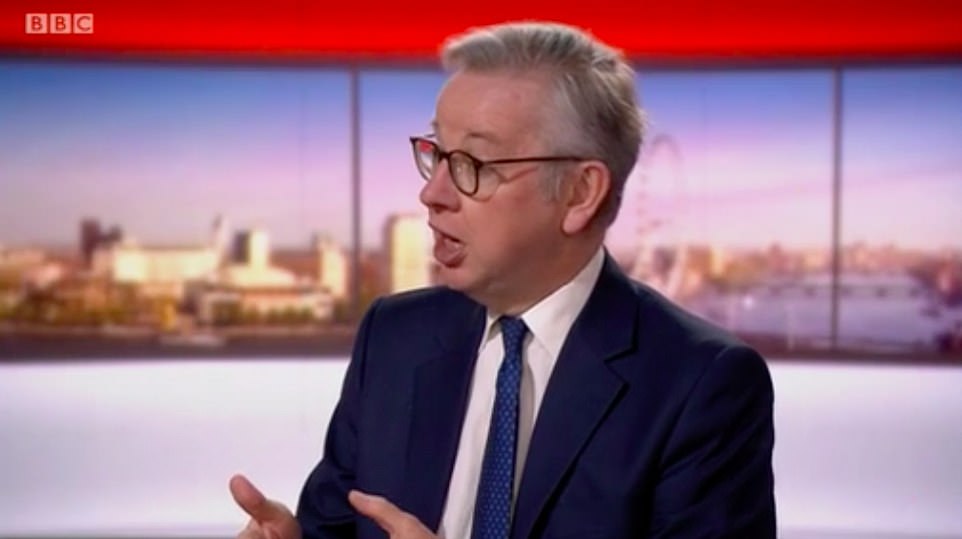 Almost a third of negative coronavirus tests could be WRONG, expert warns

Almost a third of negative coronavirus test results could be wrong, scientists say, leaving thousands believing they are virus free.

People who are wrongly told they don’t have the virus when in fact they do – called a ‘false negative’ – could be spreading the disease if they think they are safe to return to work.

False negative results would mainly be the fault of incorrect swabbing, experts say. Health chiefs have also admitted the test itself, called a PCR test, is ‘not perfect’.

Health workers are trained on how to swab a potentially infected person, while home kits come with instructions – but experts say there are bound to be mistakes.

Scientists say it is ‘dangerous’ to rely on test results to solely steer the handling of the pandemic, in which at least 34,466 Britons have died.

They argue symptoms should not be brushed aside just because a person has a negative result and they should be told to self isolate just in case.

There have been almost 2.5million tests across the UK so far, according to the Department of Health, of which 240,161 have been positive.

Some 40 per cent of tests have been repeat tests to clarify if someone has got rid of the virus, for example when a patient leaves hospital.

Public Health England have not revealed how many test results could be incorrect.

But experts believe false negatives are in the region of 10 to 30 per cent.

Ms Reeves said the Government has two weeks to put in place the test and trace approach, hold talks with the relevant parties and publish the science before schools are due to welcome more pupils through their gates.

She added: ‘The Government has got a lot more work to do to give that confidence that it’ll be safe to have more children coming into school in two weeks’ time.’

But Michael Gove – the Minister for the Cabinet Office – today guaranteed that teachers and pupils will be safe when schools are reopened before swiftly backtracking as he said ‘you can never eliminate risk’.

Some teaching unions are blocking the move and have said they will only budge once they are persuaded it is totally safe for teachers and children to go back to the classroom. But others have said they will recommend reopening after talks with Government experts.

Meanwhile, a number of local authorities have said they will not comply with Boris Johnson’s lockdown strategy and will exercise caution when it comes to reopening schools.

Mr Gove today tried to assuage concerns as he insisted it will be safe for teachers and students before then performing a screeching U-turn and admitting there will be at least some level of risk.

His statements come on the first weekend since lockdown measures were partially lifted, allowing Britons to travel away from their homes to enjoy the outdoors.

Britons woke up bright and early this morning to hit parks and beaches across the country before temperatures soar to 70F in Britain’s first Sunday since lockdown restrictions were eased.

While crowds of people were pictured enjoying Dorset’s picturesque coastline and Londoners took to the city’s green spaces, it appears most are heeding the stark warnings issued by rural country spots this weekend.

In Brighton, Britons were photographed taking a dip in the sea as dozens of others strolled along the clifftop at Beachy Head, near Eastbourne amid climbing temperatures – which are expected to hit 28C on Wednesday.

Several tourist boards have warned that people would be turned away if they became too busy and urged visitors to be careful and respectful of the rules. 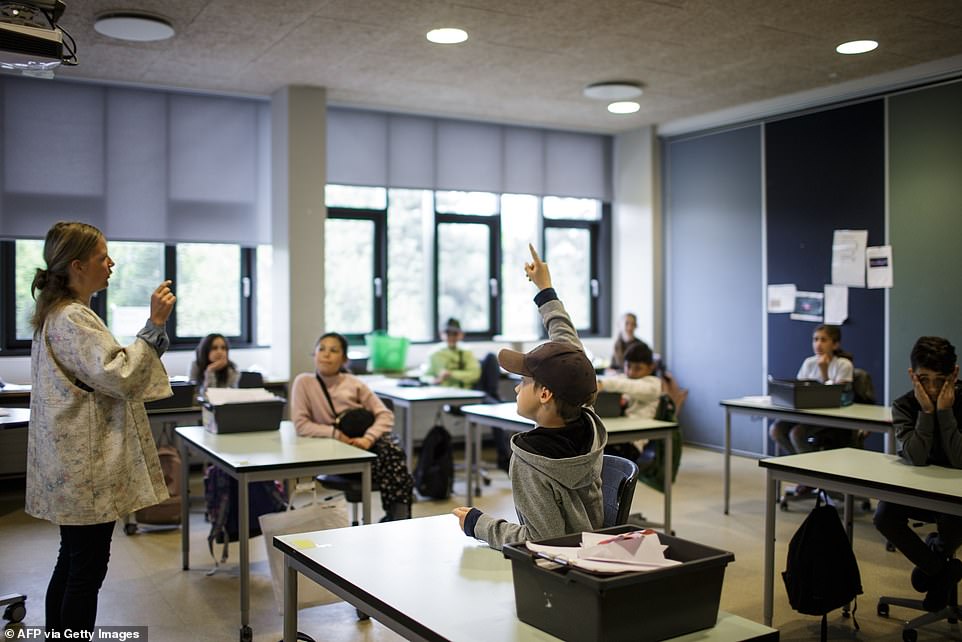 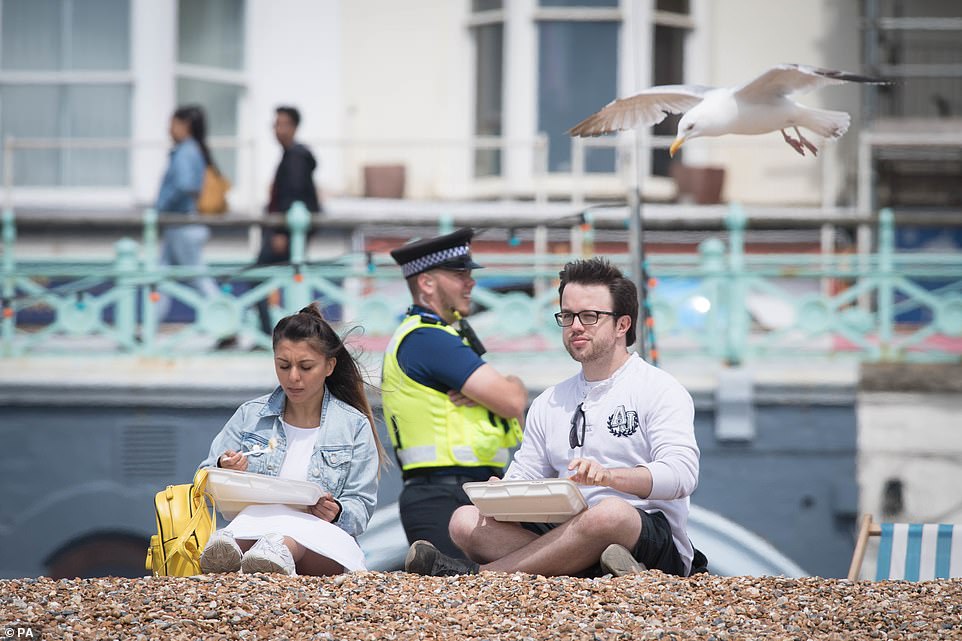 Boris Johnson has told Tory MPs he wants to return to ‘near-normality’ in July as he hails British ‘good sense’ over the lockdown and announces £93million to bring forward the opening of a research centre to fast-track a coronavirus vaccine.

Speaking to 100 of his colleagues via video link, the Prime Minister said he would take ‘grandmother steps’ to ease the rules, but only if Britons comply with the current lockdown measures. He also confirmed that Commons discussions will resume on June 2.

It comes as Mr Johnson declares British people’s ‘fortitude’ will enable them to survive the Covid-19 crisis and regain ‘the freedoms they hold dear’.

He says that the epidemic has brought out ‘the best in humanity’ and that the public’s ‘perseverance’ and ‘good common sense’ will enable the country to ‘inch forwards’ out of lockdown and towards ‘much-missed normality’.

Writing in today’s Mail on Sunday, Mr Johnson also announces that an Oxfordshire research centre will be opening a year ahead of schedule in an attempt to fast-track a vaccine against the coronavirus.

An MP listening in on the video call told The Sun: ‘Boris told us he is determined that the country should be as close to normality again before the end of July.

‘But he was clear that it all depends on the country meeting the conditions that have been set for tackling the virus.

‘Most importantly that means bringing down the infection rate – and that can only be achieved if we continue to obey the rules on social distancing to help stop it spreading.’

Mr Johnson’s exclusive article will be seen as an attempt to draw a line under the chaotic days in Westminster which followed his televised address to the nation last Sunday, which left many people confused about the rules about meeting friends and family.

The Prime Minister clarifies today: ‘You can now spend as much time as you like outdoors, for example sitting and enjoying the fresh air, picnicking, or sunbathing. You can meet one other person from a different household outdoors, provided you maintain social distancing.’

Yesterday saw cautious Britons begin to step outside as traffic congestion data across the UK crept up by three per cent. But the predicted stampede of 15million day trippers on the first weekend since lockdown was partially lifted failed to materialise as most decided to enjoy the weather closer to home.

The lower-than-expected numbers could have been down to ‘coronaphobia’ – the fear of travelling too far during the pandemic.

It is unclear whether Saturday’s toe-in-the-water attitude will follow through to today, or whether braver Britons will venture further afield.

The South Downs National Park said people must ‘observe the three Rs by exercising restraint, responsibility and respect’, and urged people to avoid popular areas and keep 2m away.

The Peak District National Trust said although staff are ‘working hard’ to welcome back visitors after weeks of restrictions amid the UK’s coronavirus crisis, they ‘aren’t quite ready yet.’

‘Like this hare with his ears pricked up, you’ve probably heard the Peak District has been busy this weekend! We’re hopping to it and working hard to welcome you back, but aren’t quite ready yet. Our main car parks at Longshaw and Ilam remain closed,’ a tweet said.

In Brighton the local council was asking people to stay away from its seafront, with Carmen Appich – chairwoman of Brighton and Hove city council’s equalities, communities and culture committee – saying: ‘If thousands of people travel to our city on a sunny day and don’t or are unable to maintain safe physical distancing because of overcrowding, this increases the risk of a Covid outbreak and puts everyone at risk.’

National Park Authority chief executive Richard Leafe said: ‘For now, we’re asking people not to rush back to the Lake District – help protect our communities, the fells will still be here when this passes.

‘When the time is right, we look forward to welcoming visitors back to the Lake District and have been working with partners to put measures in place that will help keep people safe, such as new car park information and availability to help plan ahead.’

Their advice comes as the weather is set to soar next week with highs in the mid 20s leading to concerns that lockdown-crazy Britons will rush to the outdoors.

The Met Office has forecast highs of 20C today, with temperatures expected to surpass those in Malibu, California on Wednesday when the mercury hits 28C in parts of Britain. 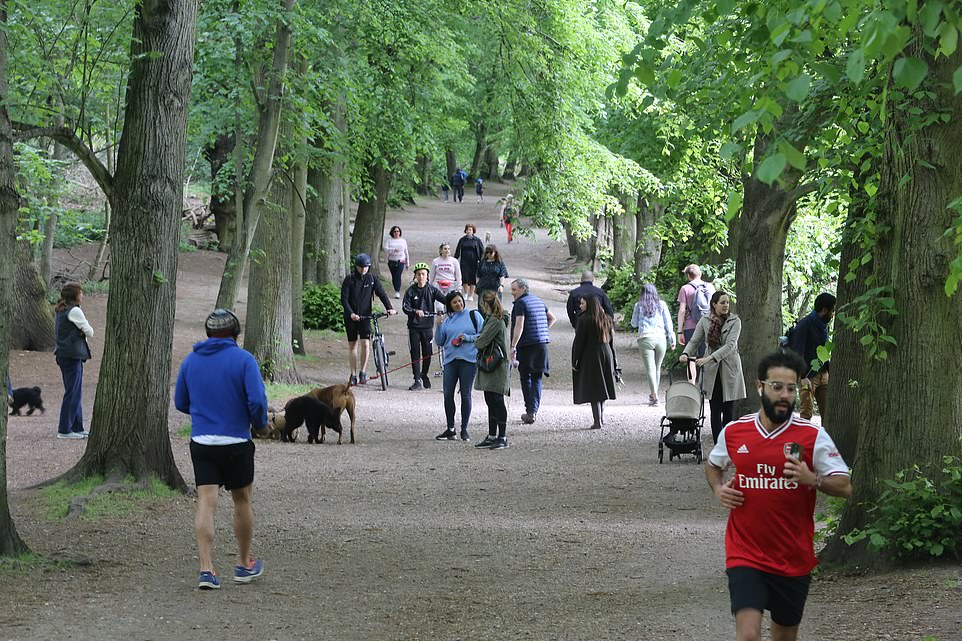 Paths in Hampstead Heath, London, were bustling with people who took to the outdoors on the first weekend since lockdown measures were lifted 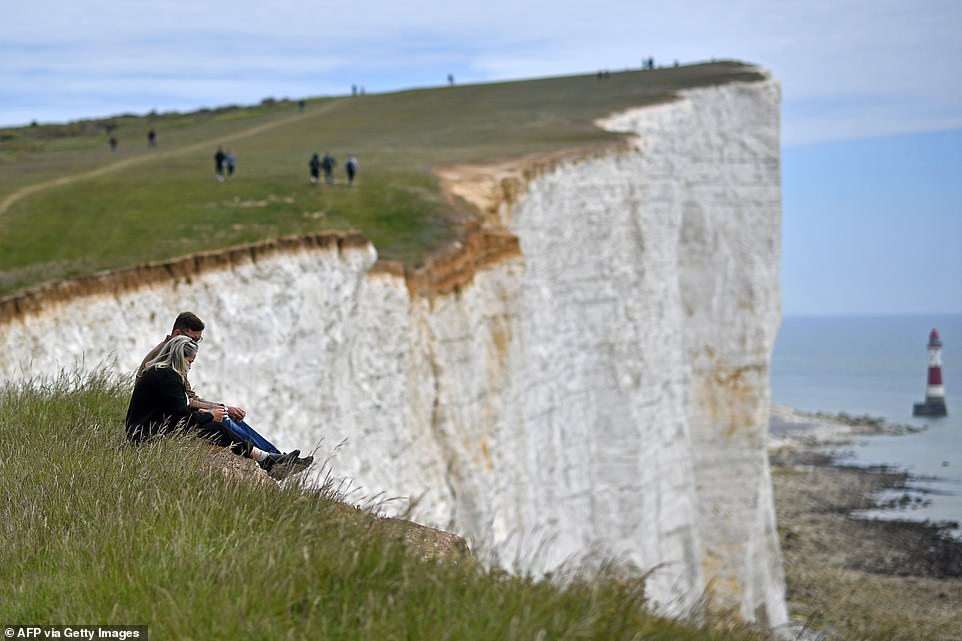 A couple sit on the cliff-edge above the lighthouse at Beachy Head, near Eastbourne following an easing of lockdown rules 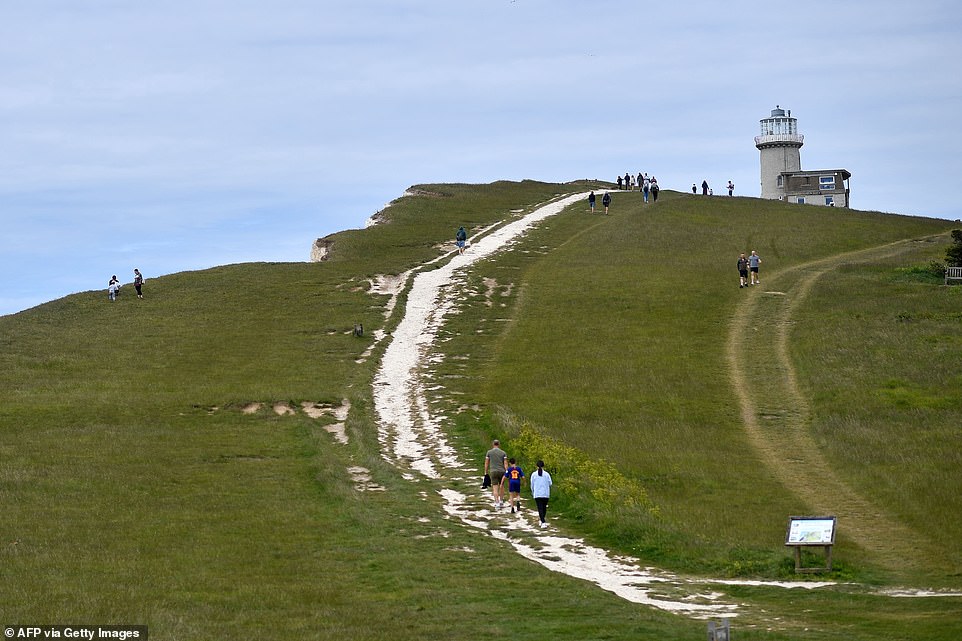 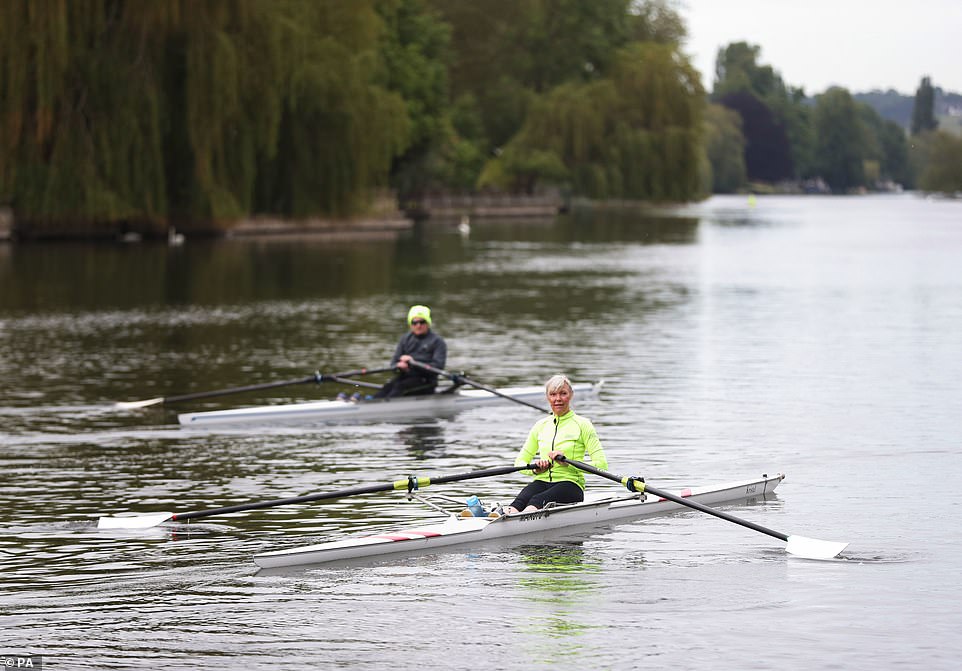 Members of the Marlow Rowing Club take to the River Thames at Marlow, Buckinghamshire, after some lockdown restrictions were lifted this week 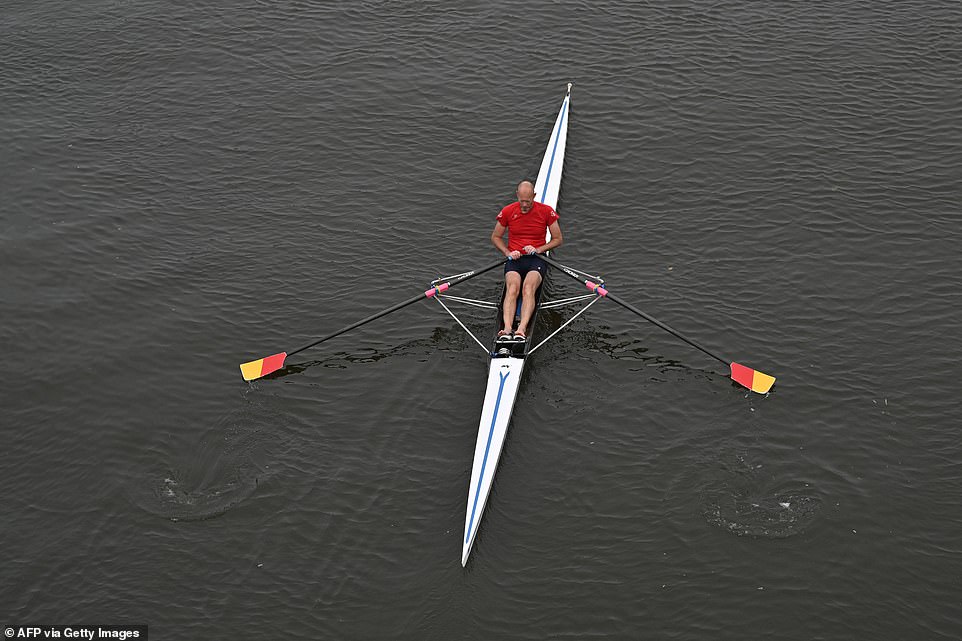