Organisers of anti-racism protests in the UK have accused the police of unfairly targeting black people during the lockdown and called for further demonstrations this week.

Protests took place in London, Cardiff, Manchester and Nottingham on Saturday and Sunday against the killing last week of George Floyd by a white police officer in Minnesota, which has led to widespread unrest across the US.

As well as showing solidarity with demonstrators in the US, Britons have expressed anger and frustration at the increased use of stop and search during the lockdown in areas with large black, Asian and minority ethnic (BAME) populations.

The Guardian revealed last week that BAME people in England were 54% more likely to be fined under coronavirus rules than white people.

British demonstrations were called spontaneously by young black people who are not affiliated with any organisations. They said they wanted to shine a spotlight on the impact of institutional racism in the UK.

During the protests, the rallying cry that “the UK is not innocent” was accompanied by Black Lives Matter banners. 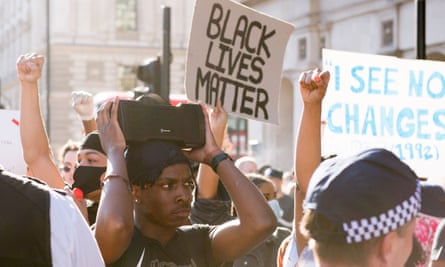 A police source told the Guardian a single incident such as video circulating on social media of alleged police heavy-handedness could be the spark for trouble and described the atmosphere as tinder dry: “I worry about the effect over here of what’s going on in the US. One incident, and it could kick off.”

Aima, 18, who did not wish to give her last name, was one of the organisers of a protest in London on Sunday. She said: “I started the #LDNBLM hashtag and it blew off. I didn’t expect that to happen. What inspired me was how much pain I’ve suffered while in the UK. I moved here from Nigeria when I was 10 and as soon as I came here I experienced a lot of discrimination from the police and from people around me. People need to understand in the UK, we’re suffering too.”

The protest was not associated with the more established group Black Lives Matter UK. A spokesperson for the group said: “Although we are supporting newly founded groups in their demonstrations, we are currently not calling protests due to the life-threatening reality of the pandemic, which is killing members of our communities at a rate far greater than their white counterparts. We are the first to work, first to die and now, first to fight.”

The Met has increased  stop and searches by 50% in a year. In April 2019 Met officers carried out 20,981 stops. This April, with lockdown fully in place, 30,608 stops were carried out. The Met says one in five searches led to further action being taken

Demonstrations follow recent high-profile stop and searches in the capital, including on an ambulance driver waiting for his friend in south London, which prompted Jovan Nepaul, the chair of Lewisham Deptford constituency Labour party, to write to the mayor of London, Sadiq Khan, expressing his concern about “the disproportionate policing of black people in our area”.

Trey Campbell-Simon, the BAME officer for the Chelsea and Fulham Labour party, said he attended a rally on Sunday to show solidarity with victims of police violence in the US. “I also attended because the British police are not innocent. There is a long history with the British police using excessive force with black people, you only have to look at the killing of Mark Duggan for one example,” he said.

A spokesperson for the Metropolitan police said: “We understand there are concerns across some communities that the use of the stop-and-search tactic during the Covid-19 lockdown has been deliberately aimed at certain groups. We would like to reassure communities that this is absolutely not the case.

“However, our use of stop and search over recent weeks has increased as additional resources have been placed into proactive patrols to tackle crime and keep London safe during this challenging period.”

Protesters say the demonstrations go much further than a protest against policing operations during lockdown.

Another organiser, who wished to remain anonymous, said there had been widespread anger over recent government failures that had affected the BAME population.

Further protests are planned in London on Saturday and Sunday. Separately, the organisation Stand Up to Racism (SUTR) has also planned a demonstration on Wednesday at Hyde Park “to demand justice for George Floyd and a public inquiry here in Britain into the disproportionate BAME deaths during the Covid-19 crisis”.

Weyman Bennett, the SUTR national co-convenor, said: “In the UK we’ve seen a black man Tasered in front of his child in Manchester this month while Tory adviser Dominic Cummings gets away scot-free.”

Demonstrators last weekend also demanded justice for Belly Mujinga, a 47-year-old railway ticket office worker who died after contracting Covid-19 after being spat at while on duty. The British Transport Police announced last week that no further action would be taken.

Edan, 17, who plans to attend the next wave of protests in London, said events over the past decade had awoken her generation to widespread inequalities in the UK. “It’s forcing people to see we live completely different lives, even if we live in the same area and go to the same school. We are leading two completely different realities.”

The Met said there were 23 arrests at the demonstrations in London on Sunday. “The arrests were for a variety of offences including breaching the Covid-19 legislation, assault on an emergency worker, possession of an offensive weapon and breach of the peace. The ages of those arrested ranged from 17 to 30 years.”