Britain today announced 176 more coronavirus deaths, taking the total number of victims to 39,904 –  as separate shock data suggests the UK’s outbreak is still killing more people each day than the rest of the EU countries combined.

The UK’s death toll is now on the brink of passing the 40,000 mark, but the epidemic has slowed dramatically in the past few weeks. For comparison, last Thursday there were 377 Covid deaths, and 338 the week before that.

However, Britain is not out of the woods yet as analysis of yesterday’s figures suggest it is still being hit harder than the rest of the 27 countries in the bloc put together.

UK health bosses announced 359 more coronavirus victims on Wednesday, compared to just 345 deaths recorded in the EU, including 81 in France, 74 in Sweden and 71 in Italy. It’s unclear how many Covid victims there were today in the EU.

Separate backdated data has also suggested the real number of deaths in Britain has already tipped 50,000, which would cement the UK’s status as being Europe’s worst-hit nation.

Today’s fatalities were revealed by Transport Secretary Grant Shapps, who also announced that face coverings would be compulsory on public transport in England. Mr Shapps encouraged the public to make their own face covering or use a scarf, but said surgical masks should be reserved for healthcare workers.

In other coronavirus developments in Britain today: 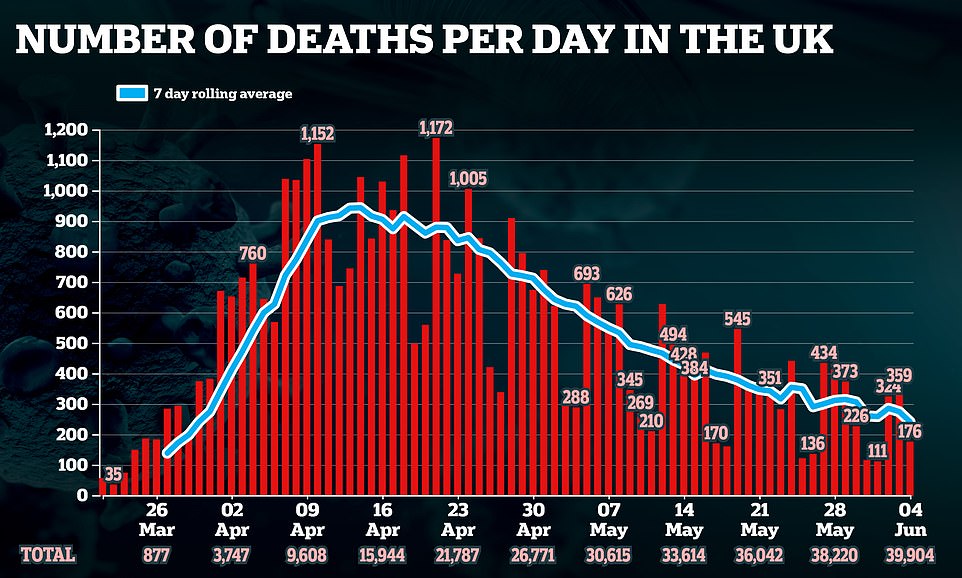 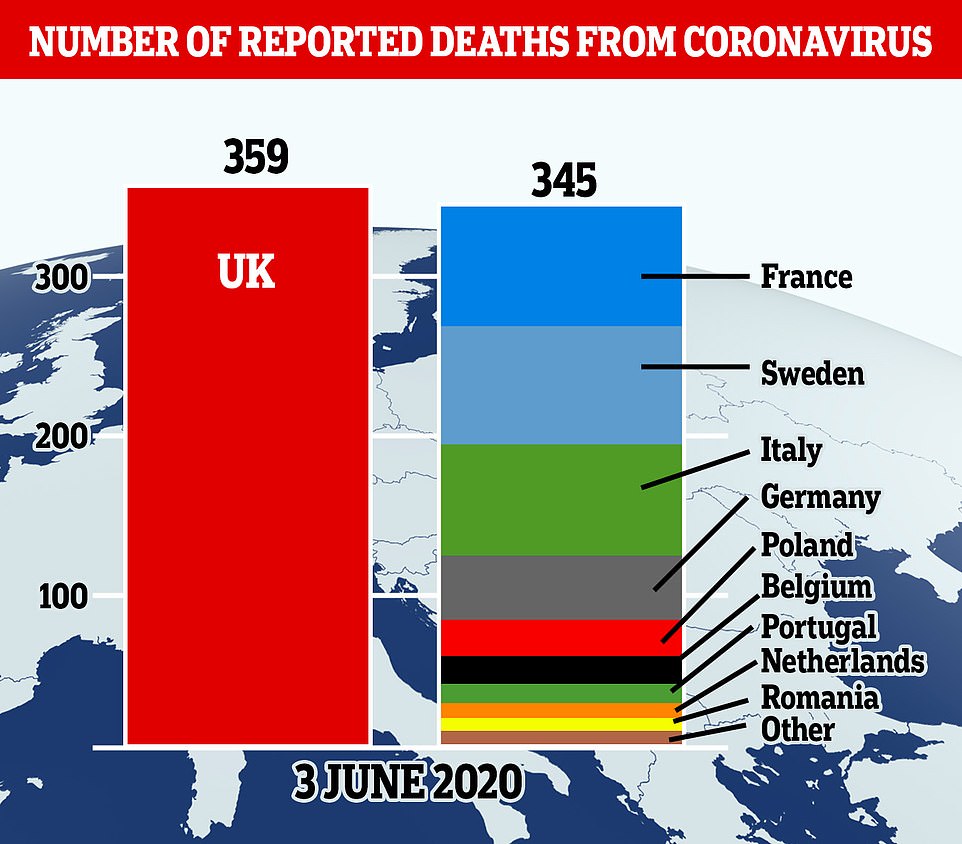 Britain’s outbreak has slowed dramatically in the past few weeks. Yesterday health bosses announced 359 more victims – down almost 13 per cent on the 412 deaths recorded last Wednesday. But analysis of data shows only 345 deaths were recorded in the 27 EU countries yesterday, including 81 in France, 74 in Sweden and 71 in Italy 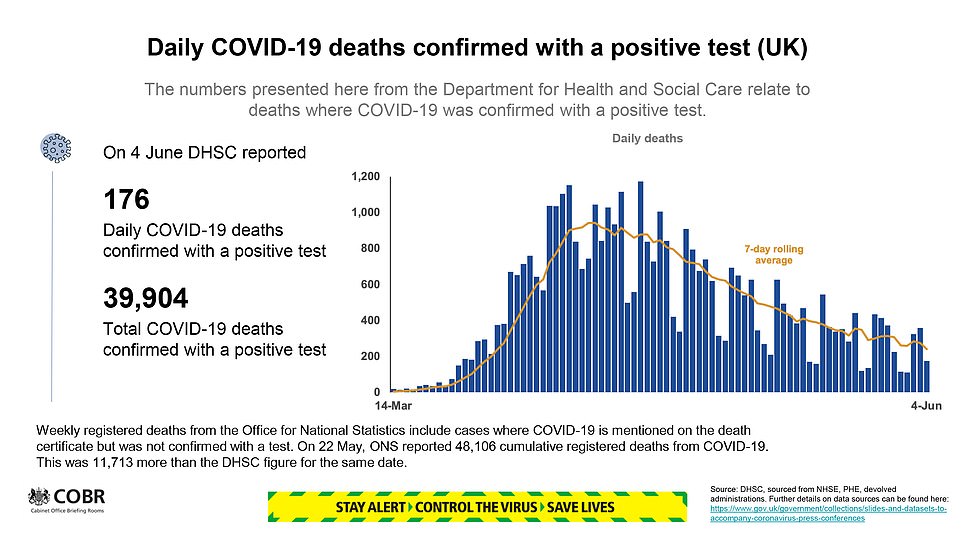 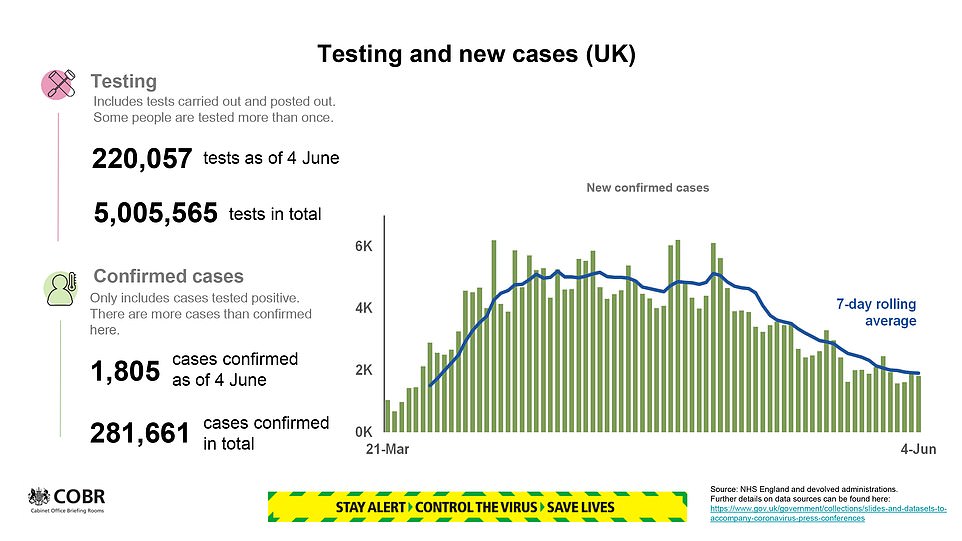 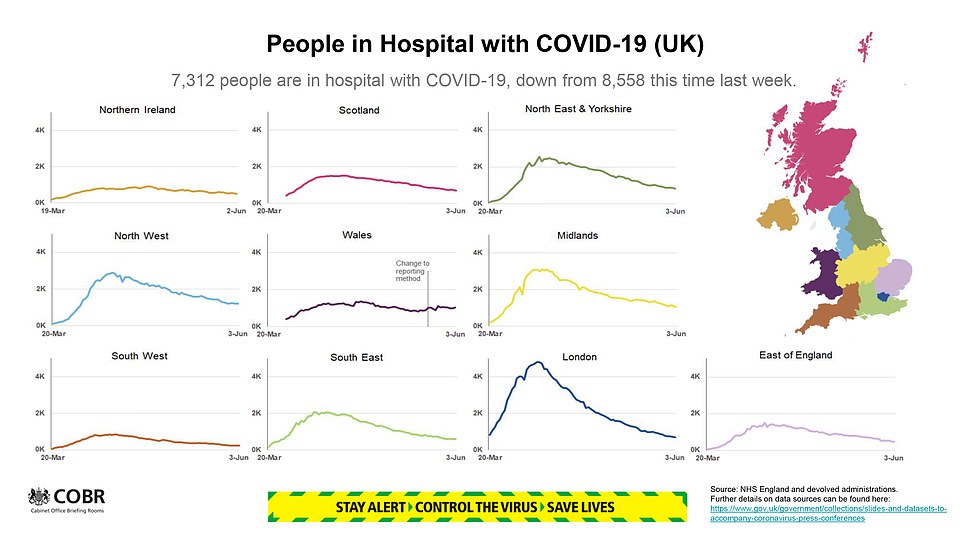 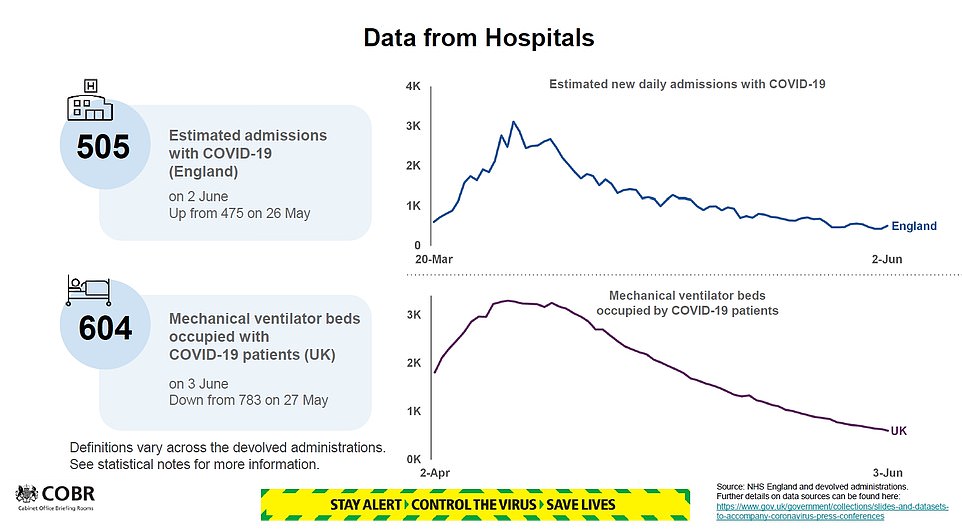 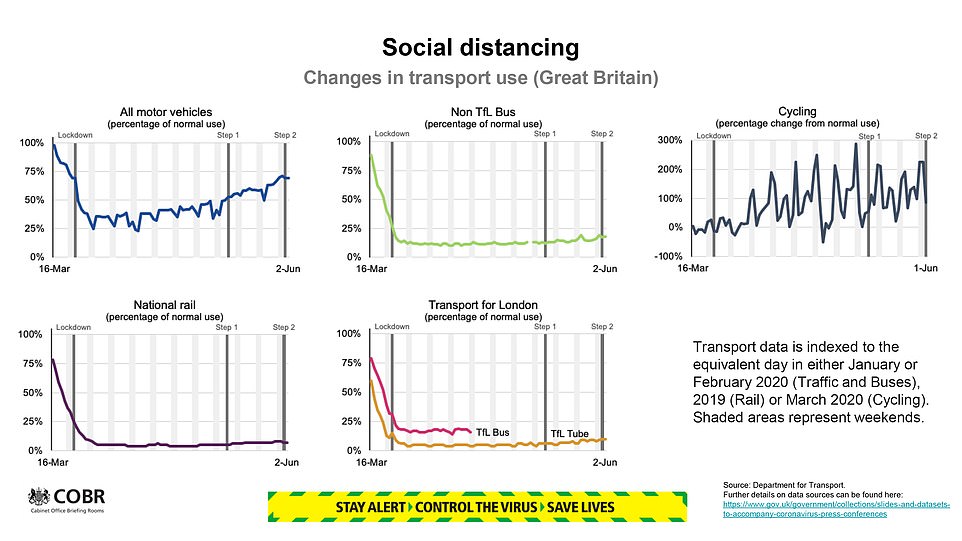 Britain yesterday recorded more Covid-19 deaths than the rest of the EU combined, according to an analysis of official figures.

Department of Health chiefs announced 359 fatalities on Wednesday, slightly higher than the 345 recorded in the 27 members of the bloc, according to data collected by Johns Hopkins University.

Separate figures suggest the true death toll among the 27 nations was even lower – coming in at 331.

Of the new deaths recorded in Britain today, NHS England saw 115 in hospital patients who tested positive – the youngest a 26-year-old.

Scotland posted nine Covid-19 deaths in all settings, followed by eight in Wales and one in Northern Ireland.

The remaining deaths occurred in care homes in England in the wider community.

It comes as it was today revealed that police have launched a probe into a care home which was ordered to close after 15 residents died following a major outbreak of coronavirus.

Temple Court in Kettering, Northamptonshire, was forced to shut its doors following the Covid-19-related deaths of patients who were sent there after being discharged from hospital.

The home is now being investigated by Northamptonshire Police and council bosses amid allegations of abuse and neglect.

Officers are speaking to relatives of the 15 residents following claims they were sent there without being tested after being released from two separate hospitals.

In other developments, furious MPs demanded the Commons sits ‘virtually’ again today after a senior minister ‘sniffled, sweated and snorted’ through a statement – before self-isolating for coronavirus.

In extraordinary scenes in the chamber last night, Business Secretary Alok Sharma ignored the government’s own guidance as he struggled on despite repeatedly wiping his brow and blowing his nose.

The episode sparked concerns that dozens of politicians have been at risk of infection and will now have to go into quarantine – potentially including Cabinet ministers and top officials.

It also heaped pressure on Boris Johnson to reverse the controversial decision to scrap electronic voting and Zoom debates, after ‘farcical’ scenes this week that saw hundreds of MPs ‘conga’ through Westminster in a mile-long socially distanced queue to take part in divisions.

Figures today also revealed only a quarter of business that have temporarily closed during the coronavirus crisis plan to reopen their doors within the next month, dampening efforts to kickstart the economy.

Just nine per cent of businesses told the Office for National Statistics (ONS) they would be ready to open within a fortnight, with a further 16 per cent saying they could be ready within four weeks.

Almost half of those polled in May – before the announcement to reopen British businesses – said they did not know when they might open, piling pressure on the Government’s economic plans.

Boris Johnson last month gave the go-ahead for non-essential retail to restart on June 15, as he attempted to bring the coronavirus-battered UK High Street back to life.

A poll also revealed children in the north are missing out on an education as Labour-run councils refuse to allow schools to reopen.

A survey of primary headteachers has found just a third of them followed the Prime Minister’s plan and managed to bring back Reception, Year 1 and Year 6 students back to class on Monday.

The survey of 10,000-plus schools was carried out by the National Education Union, which found 44 per cent of schools did not open more widely on June 1.

Bill Gates today warned anti-vaxxers could wreck attempts to develop a Covid-19 vaccine if they refuse to take it and reduce the level of herd immunity.

Over 80 per cent of people may need to have the jab for it to work properly – but the philanthropist said he feared anti-vaccine ‘craziness’ might put people off getting it.

The billionaire founder of Microsoft, who now donates hundreds of millions of dollars to global health causes, said the prospect was ‘worrying’.

Vaccines can only be successful at stamping out a virus if so many people get them that a vast majority of the population is immune and the disease can no longer spread.

Mr Gates’s comments come as vaccine trials on humans are in full swing in the UK and the University of Oxford has announced it will test its candidate in Brazil now.

Public health chiefs today warned easing lockdown before NHS Test and Trace is running at ‘full speed’ could result in the UK ‘hitting the brakes’ too late to stop a second wave of coronavirus.

The Government’s test and trace system launched last week but it went live without the key NHSX contact tracing app while some staff have complained they have not got any work to do, passing the time by watching Netflix or playing with their dog.

But Boris Johnson is pushing ahead with his plans to loosen draconian restrictions, with primary schools now having started their phased return while non-essential shops should start to reopen later this month.

Experts believe a fully functioning test and trace programme will be critical if the UK is to avoid a spike in infections as life gets back to normal.

Local health bosses are concerned that easing measures now before test and trace has shown itself to be effective could have disastrous consequences.

They said the data from test and trace should help inform decisions and that without a full picture the Government may not actually know the scale of a fresh outbreak.

That could mean that by the time ministers realise they need to reverse lockdown loosening it could be too late and the UK could have ‘spun off the road and be over the cliff-edge’.

Downing Street today continued to refuse to publish any of the data showing how effective the scheme has been since its launch. 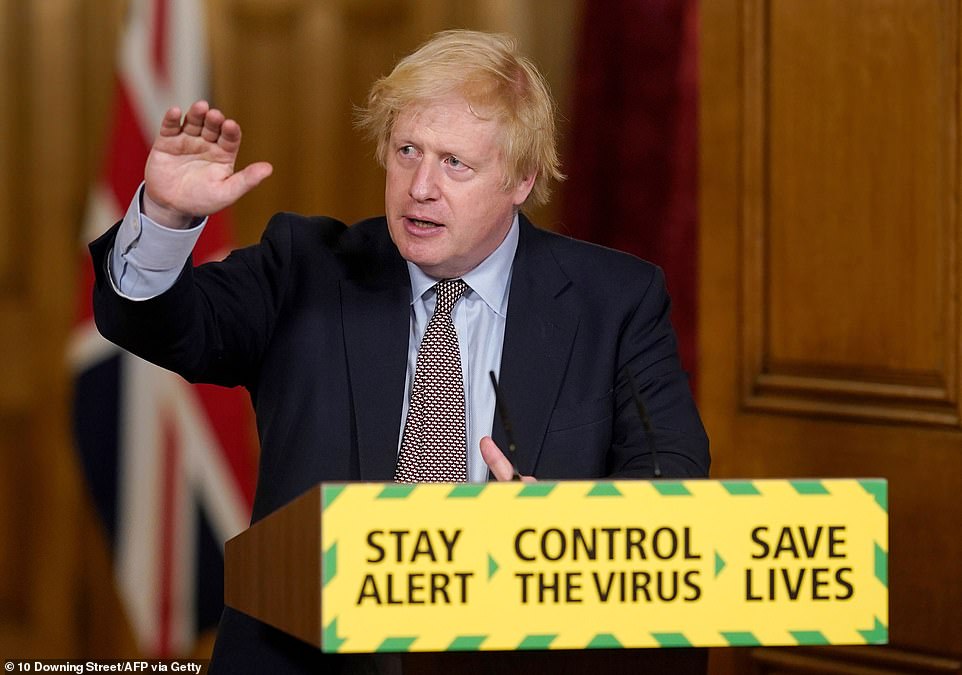 Boris Johnson, pictured in Number 10 yesterday, is pushing ahead with easing lockdown despite NHS Test and Trace only launching last week 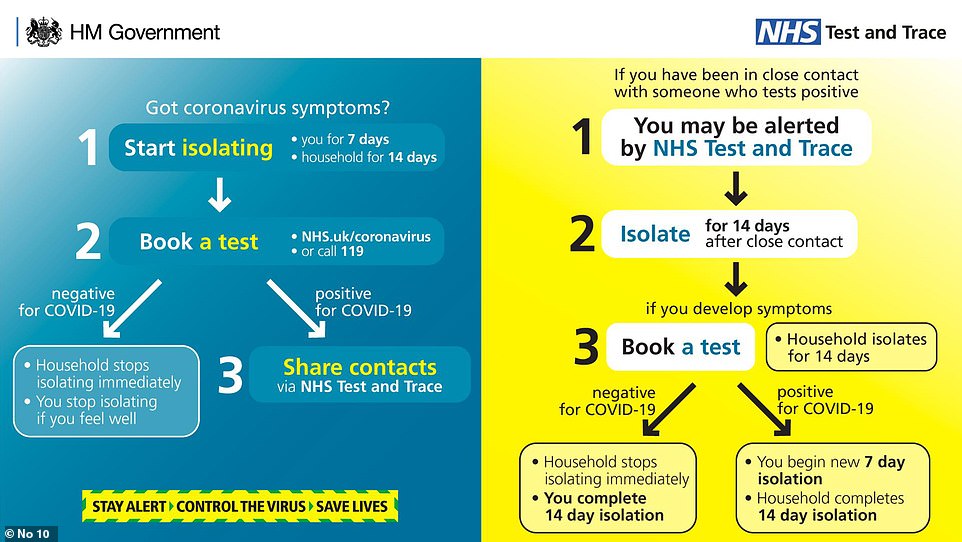 Test and trace requires people with symptoms to self-isolate and get tested. If they test positive their close contacts are then tracked down and also told to self-isolate.

The system is designed to break the chain of transmission as quickly as possible in order to squash potential outbreaks and stop them from escalating.

Lisa McNally, public health director at Sandwell Council in the West Midlands, said she was surprised the lockdown had been eased before the test and trace system was at ‘full speed’.

She told BBC Radio 4’s Today programme: ‘This system is certainly up but I’m not sure about running.’

She continued: ‘I don’t think I’m particularly surprised, to be honest, that this system isn’t running effectively in a few short days – it was never going to be, it is an enormous task.

‘What surprises me, I guess, is that we are moving ahead so quickly with easing lockdown before the system is at full speed.

‘We need to allow time to assess how things are going, get this system up to speed.

‘To be honest with you, I’m concerned that by the time we realise we need to hit the brakes, we will have spun off the road and be over the cliff-edge.’

She predicted the UK could be ‘going back to a place we really don’t want to be, which is where we were at the end of April’ in terms of the number of coronavirus-related infections and deaths if test and trace does not prove to be effective.

Ministers are facing growing criticism over their refusal to publish data showing how many people have been contacted by NHS Test and Trace so far.

Number 10 would only say today that the numbers will be released ‘shortly’ once the data has been verified.

Told that without the statistics it is impossible to know if the system is working and therefore it will be hard for the public to have confidence in it, the Prime Minister’s Official Spokesman said: ‘I certainly understand the desire for data to be published showing precisely how it is working.

‘But equally it is important that when we do put that information into the public domain it has been properly validated.

‘We are working on that. We understand the need for transparency and as I say we will be providing weekly updates on test and trace shortly.’

NHS Test and Trace has suffered numerous set backs since it went live with many staff complaining that they have not got any work to do.

One contact tracer today said he had spent four shifts playing with his puppy and claimed that more than 80 per cent of staff were idle on Wednesday afternoon.

The man said: ‘It’s really frustrating. They’re throwing thousands or even millions of pounds away, all of the time I’m sat here doing basically nothing.

‘I sit next to my laptop, reading newspapers and looking after my new puppy. We were told we need to be ready at a moment’s notice, but we’re sat here watching.’

It comes after Mr Johnson pledged yesterday to process all coronavirus tests within 24 hours by the end of June.

However, it subsequently emerged that the target will not include postal kits while tests sent to care homes may also not be included – approximately one third of the daily total.

Experts believe tests must be processed within 24 hours so that the contacts of people who test positive can be swiftly identified and told to self-isolate in order to prevent the spread of the deadly disease.

The fact that the PM’s 24 hour pledge does not appear to be a blanket guarantee is likely to prompt a backlash amid fears delays in processing tests could hamper efforts to prevent a second wave.