Latest News
Home /School children under 15 have just a 3.5MILLION-to-one chance of dying from coronavirus

School children under the age of 15 have a ‘tiny’ one-in-3.5 million chance of dying from coronavirus, according to statistics.

Analysis of data from the Office for National Statistics by scientists from the University of Cambridge shows that the coronavirus risk to children is extremely low.

The death rate for youngsters aged five to 14 in England and Wales is one in 3.5 million and for under-5s it is one in 1.17 million.

Official data shows that only 14 people aged under 19 have died with confirmed or suspected COVID-19 since the start of the outbreak. No children aged between 5-9 have lost their lives to the virus.

In comparison, between 30 and 60 people are hit by lightning every year in the UK, according to the Royal Society for the Prevention of Accidents.

This is a risk of between one in 2.21 million and one in 1.1 million each year, the Daily Telegraph reported, although it was unclear how many people hit by lightning are children.

The figures come after the Government scrapped its target of getting all primary school pupils back in the classroom before the summer holidays.

A leading teaching union claimed it has been ‘abundantly clear’ that the Government’s dates for reopening schools were ‘ill-considered, premature and unworkable’. 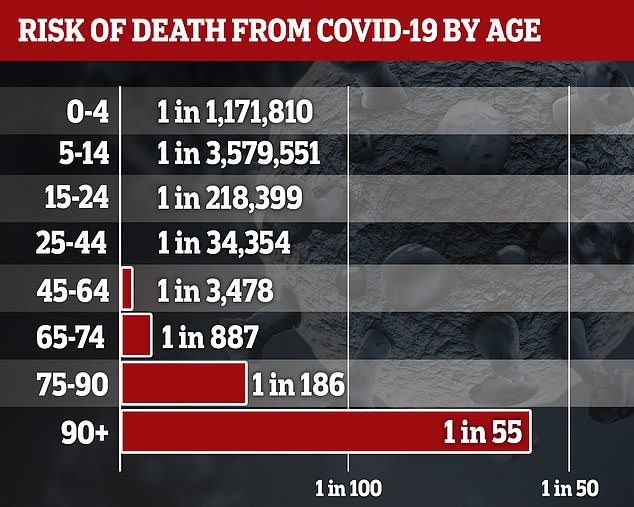 School children under the age of 15 have a very low chance of dying from coronavirus, according to statistics

Education Secretary Gavin Williamson made the announcement amid warnings the two metre social distancing rule will make a full return to the classroom impossible.

The Government’s long-stated ‘ambition’ was to see all primary children return for at least a month in the before the end of the academic year but unions and councils have said school buildings would have to double in size to make that happen.

Smaller classes and social distancing requirements have forced the Education Secretary into a rethink as he conceded on Tuesday ‘we are not able to welcome all primary children back for a full month before the summer’.

Anxious parents also spoke to MailOnline about their worries for their children if the uncertainty continues and one father demanded to know, ‘what is going to be different if they go back in September’ instead of if they return to school now.

However, speaking about the new research into the risks posed to children by coronavirus, Prof Sir David Spiegelhalter, chairman of the University of Cambrdige’s Winton Centre for Risk, said the threat posed was ‘tiny’. 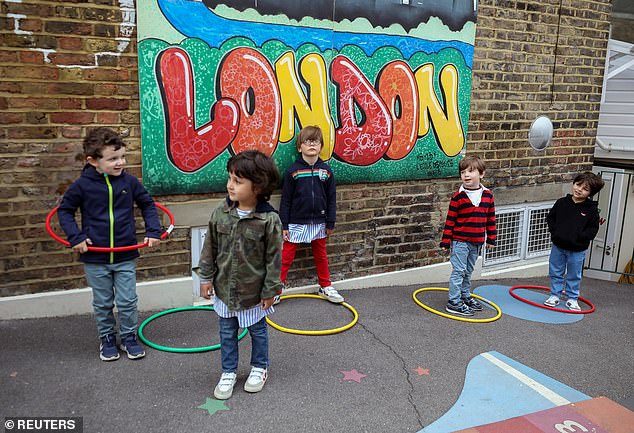 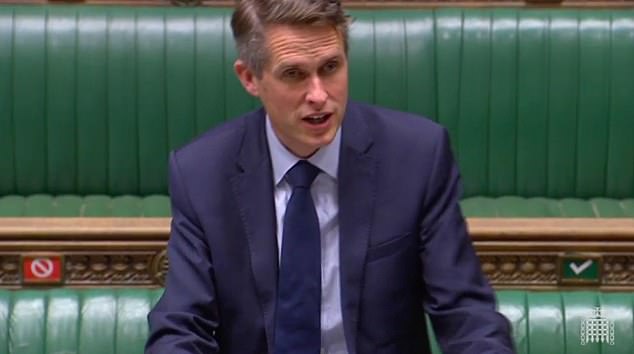 Pictured: Education Secretary Gavin Williamson made the announcement on Tuesday 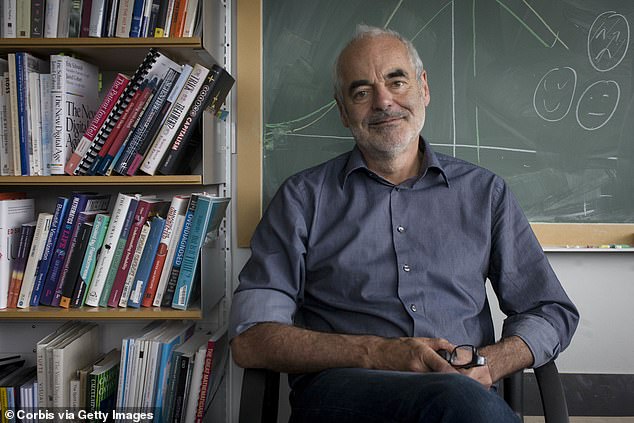 However, speaking about the new research into the risks posed to children by coronavirus, Prof Sir David Spiegelhalter (pictured), chairman of the University of Cambrdige’s Winton Centre for Risk, said the threat posed was ‘tiny’

He added that allowing immunity to build naturally between youngsters may be recommended if a vaccine does not become available.

He said: ‘In school kids aged five to 14 it’s not only a tiny risk, it’s a tiny proportion of the normal risk.

Why can’t we get schools back like the rest of Europe? How classrooms in most of the continent have reopened and there is no spike in cases

Evidence from 22 EU states that have restored classes suggests little or no risk to pupils, teachers or families.

In Wales, the Government plans to reopen all schools on June 29, with a third of children at most in school at any time.

Pupils in Scotland will return on August 11 but they will spend around half their time in school and the other half at home.

In Northern Ireland, all children are intended to restart classes on a phased basis in September, but schools can accept pupils preparing for exams in the third week of August.

Denmark reopened primaries and nurseries a month ago and has seen infection rates continue to fall.

Norway, which is outside the EU, has taken similar action without a rise.

Around 1.4million French pupils went back to class in May and of around 40,000 schools and nurseries only 70 were closed again following virus cases.

‘I remember the pre-vaccination era and I was sent round to play with friends with measles, mumps and chickenpox.

‘I’m not suggesting this is the public health solution to this, but if no vaccines come along you might be thinking that.’

And Lord Blunkett, who served as Education Secretary as part of Tony Blair’s New Labour government, said the Government had shown a ‘lack of will’ by not reopening schools.

‘It is a failure to do what we have already done with the health service and economy, which is to say there are challenges, there are real problems but we are going as a nation to seek to overcome them.

‘Why is it that other countries, not just in Europe but across the world, can have the ambition to get their children, in all kinds of creative ways, back into school and we can’t?

‘I can only conclude that the Government is losing the plot.’

The findings come after a review of the scientific evidence into the risks presented by re-opening schools concluded that doing so is unlikely to spread the disease among children or adults.

The research, a systematic review of more than 47 separate studies, found that children are at a low risk of catching, spreading and suffering severe symptoms of the disease, and unlikely to infect their families or teachers.

The team of scientists at the Department of Medical Epidemiology and Biostatistics at the Karolinska Institute, near Stockholm, in Sweden, concluded that keeping schools open is ‘unlikely’ to spread COVID-19.

They added that children are unlikely to catch it or to pass it on to their families.

Professor Jonas Ludvigsson, who led the review, told the Daily Mail: ‘The vast majority of children do not get very sick from Covid-19 and deaths are extremely rare.

‘So there’s really no reason to close down schools and kindergartens to protect the children themselves.’

Anne Longfield, the Children’s Commissioner for England, said on Tuesday she was ‘incredibly concerned’ about the long-term impact on children’s education and wellbeing and warned youngsters could remain ‘isolated’, with many living in ‘fragile’ family environments. 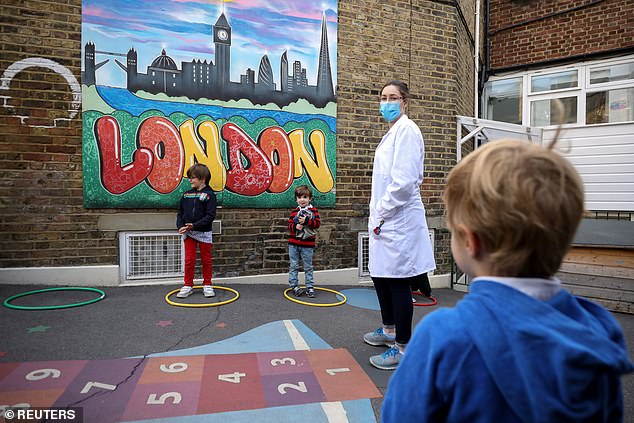 Professor Spiegelhalter added that allowing immunity to build naturally between youngsters may be recommended if a vaccine does not become available. He said: ‘In school kids aged five to 14 it’s not only a tiny risk, it’s a tiny proportion of the normal risk’

Mr Williamson said large schools which do have space to bring back more pupils should do so in the coming weeks as he promised all children will be back in the classroom in England by the autumn, in September.

Boris Johnson is under increasing pressure from his Cabinet to slash the two metre rule in order to make it easier for schools, shops and the hospitality sector to return.

Numerous countries have a one metre or 1.5 metre rule.

Hopes of the two metre restriction being reduced were given a boost after the World Health Organisation said it is ‘very rare’ for asymptomatic coronavirus patients to pass on the disease.

Gary Murray, who has two daughters aged 15 and eight, said: ‘The question I feel a lot of parents want answering is; what is going to be different if they go back in September to what is different to them going back to school now?’

Another parent, Lindsay Astle, from Nottingham, told MailOnline her eight-year-old son has been ‘massively affected’ and suffered nightmares as a result of his school being closed.

Other parents said they were ‘deeply concerned’ about the impact of social distancing on their children  and likened it to ‘child abuse’. 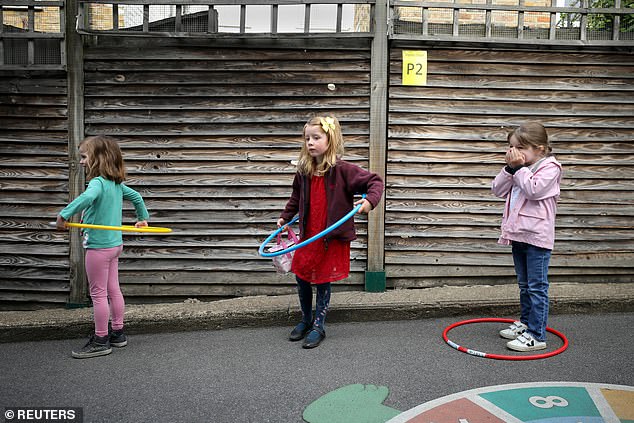 Speaking in the House of Commons, Mr Williamson conceded the Government had no choice but to drop its ‘ambition’ for all primary school pupils to return before the summer holidays.

He said: ‘We continue to follow the best scientific advice and believe that this cautious, phased return is the most sensible course of action to take.

‘While we are not able to welcome all primary children back for a full month before the summer we continue to work with the sector on the next steps where we would like to see schools who have the capacity to bring back more children in those smaller class sizes.

‘To do so, if they are able to, before the summer holidays.

‘We will be working to bring all children back to school in September.

‘I know students who are due to take exams in 2021 will have experienced considerable disruption to their education this year and we are committed to doing all we can to minimise the effects of this.

‘Exams will take place next year and we are working with Ofqual and the exam boards on our approach to these.’

Currently children are placed in ‘protective bubbles’ of no more than 15 per class at primary schools to help prevent the spread of the disease.

But this often requires using additional classrooms or different areas of the school, with some not able to find enough space to fit all their pupils in. 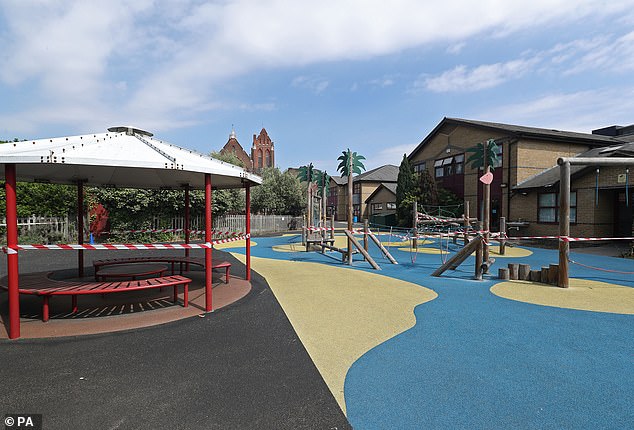 Boris Johnson is under increasing pressure from his Cabinet to slash the two metre rule in order to make it easier for schools, shops and the hospitality sector to return. Pictured: The cordoned off play area and equipment of a primary school in London on Tuesday

Mr Williamson said the class size restriction imposed by Public Health England is a ‘limitation’ to getting more children back to school.

‘That obviously does limit the amount of ability to have as many year groups in school as we’d like,’ he said.

‘But as this is changed and as this is modified this will give us the ability to slowly and cautiously move forward in terms of welcoming more children back to school when that is the right time.’

Tory MP Robert Halfon, chairman of the Commons Education Committee, has urged the Government to set up a ‘national education army’ of volunteers who could set up temporary classrooms in school gyms and public libraries.

Earlier he had urged the Government not to ditch its primary schools ‘ambition’.

He said the UK was a ‘strange country’ for seemingly prioritising reopening pubs over schools.