A US Air Force F-15C Eagle fighter jet has crashed into the North Sea off the coast of Yorkshire during a routine training flight.

The aircraft had been taking part in a four-jet formation off Flamborough Head, near Bridlington, before it hit the water.

A huge search and rescue mission has been launched for the pilot of the single-seater jet, which had been based at RAF Lakenheath in Suffolk.

It is unclear what caused the incident at 9.40am. 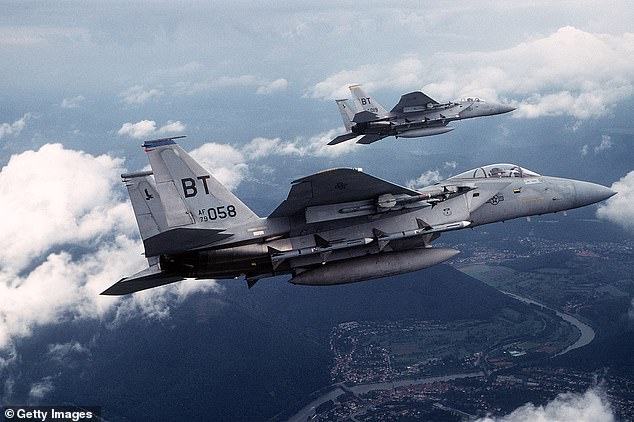 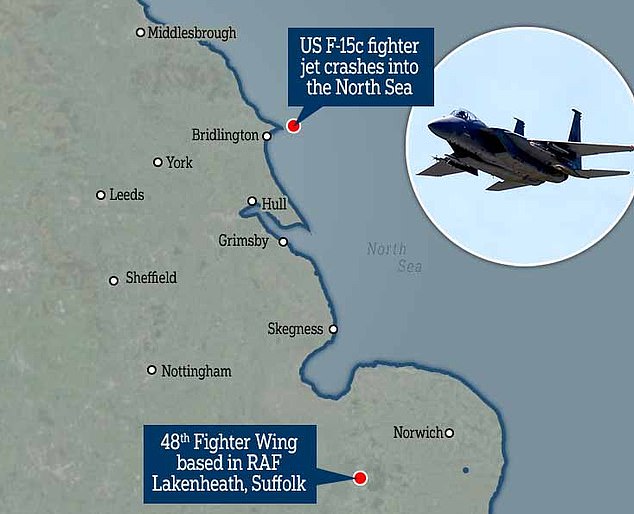 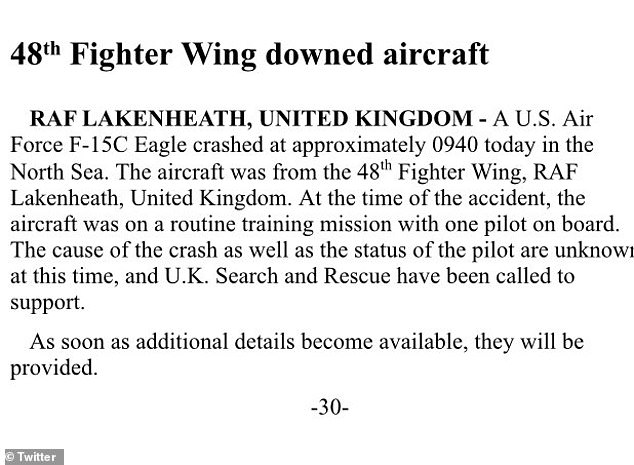 In a video statement, Colonel Will Marshall, Commander of the 48th Fighter Wing based at RAF Lakenheath, said the cause of the crash was ‘unknown’.

He said: ‘Search-and-rescue efforts are currently under way, but the pilot of the aircraft is still missing.

‘We will provide updates as they become available while prioritising respect and consideration for the pilot’s family.’ He said they were hopeful the pilot will be found.

A statement from RAF Lakenheath added: ‘At the time of the accident, the aircraft was on a routine training mission with one pilot on board.

‘The cause of the crash as well as the status of the pilot are unknown at this time and UK Search and Rescue have been called to support.’

Two RNLI lifeboats and a helicopter were heading to the crash site – 74 nautical miles off the coast – as three US Boeing KC-135 Stratotankers circled above. 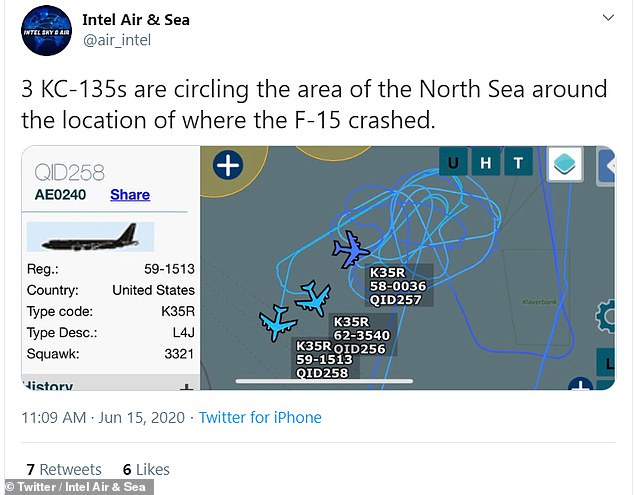 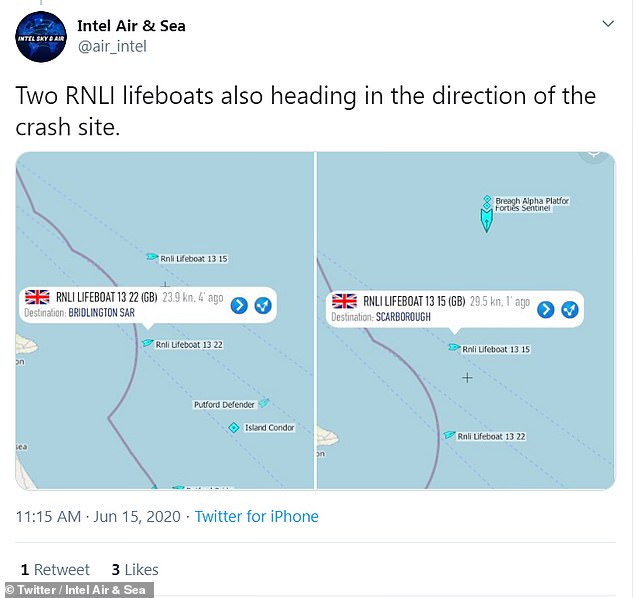 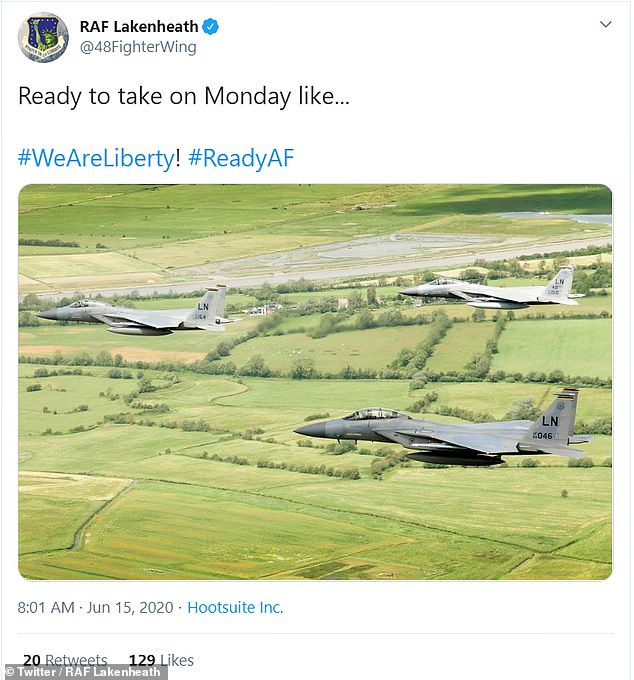 Earlier today RAF Lakenheath shared pictures of three warplanes with the caption: ‘Ready to take on Monday like… #weareliberty.

HM Coastguard said in a statement: ‘HM Coastguard is coordinating the response after reports were received of an aeroplane going down into the sea 74 nautical miles off Flamborough Head.

The F-15 Eagle is an American twin-engine, all-weather tactical fighter aircraft designed by McDonnell Douglas, now Boeing, in 1972.  It entered service in 1976 and is among the most successful fighter jets in production today, with no losses in aerial combat.

The aircraft is predominantly used by the US Air Force as well as the air forces of Saudi Arabia, Israel and Japan. Each model costs around £21million ($28million) and the aircraft has been modified and improved over the years with different variants now used around the world, including the faster F-15E Strike Eagle.  As of 2017, the aircraft is being produced in different variants with production set to end in 2022.

‘The HM Coastguard helicopter from Humberside has been sent along with Bridlington and Scarborough RNLI lifeboats.

‘Following a Mayday broadcast by HM Coastguard, other vessels nearby are heading to the area. It’s believed the aircraft had one person on board.’

Flying was suspended at RAF Lakenheath following news of the crash.

Fire engines were seen on the runway at the base at midday as they waited for the other planes to return from the mission.

One of the planes was later seen landing, reportedly with a cracked canopy.

Earlier today RAF Lakenheath shared pictures of three warplanes with the caption: ‘Ready to take on Monday like… #weareliberty.’

The F-15C Eagle, a single-seater air defence fighter, is a model of jet that has been used by the US Air Force since 1979.

RAF Lakenheath is the ‘largest US Air Force-operated base in England and the only US air forces in Europe F15 fighter wing’, its website said.

The 48th Fighter Wing, which has operated from the base since 1960, has more than 4,500 ‘active-duty military members’.

Its mission statement is to ‘provide worldwide responsive combat air power and support’.

In October 2014, an F15D fighter jet based at RAF Lakenheath crashed in fields near Spalding in Lincolnshire.

The pilot ejected safely, suffering only minor injuries, and no-one on the ground was hurt.

A US Air Force investigation found that the crash was caused by the ‘angle of attack’ of the aircraft and ‘imperfections’ in the assembly of the jet’s nose cap.

In October 2015, US pilot Major Taj Sareen died when his F-18 Hornet jet crashed on farmland near RAF Lakenheath.

A subsequent investigation found the 34-year-old did not report problems with his aircraft before take-off.