By Rita Sobot and Lydia Catling and Danny Gallagher For Mailonline

Travellers from the UK will not have to quarantine on arrival in Spain from Sunday, Spanish officials have now said.

The Spanish foreign minister said British visitors would be welcomed to Spain from Sunday without the need for quarantine after landing there, as the nation reopens its borders to EU visitors.

The news comes as Ryanair announced it will restart flights to Spain tomorrow, less than two weeks earlier than its original July 1 date. 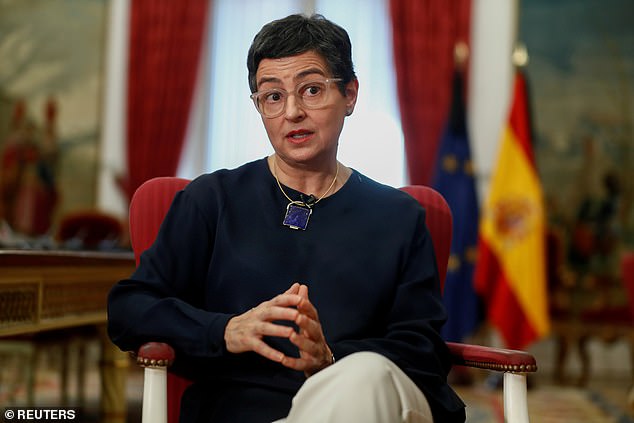 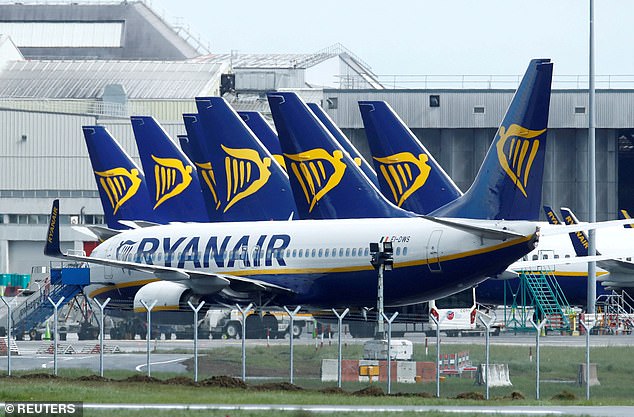 A flight headed for Alicante, Spain, will depart from East Midlands tomorrow afternoon followed by another from Manchester which will land in Tenerife.

Speaking about welcoming Britons back to Spain, Arancha Gonzalez Laya told BBC News: ‘We will allow British visitors to enter Spain just like the rest of the European Union as from June 21, freely and without the need for a quarantine.

‘We’re discussing with the UK authorities to see if they would do the same on their side, we nevertheless are doing this out of respect for the 400,000 British citizens that have a second residence in Spain and are dying to benefit from their homes in our country.

London City Airport reopens on Sunday after being closed to commercial flights for nearly three months.

The airport has introduced a series of new safety and hygiene measures, including enhanced cleaning, limiting terminal access to those with a ticket and mandatory face coverings.

Its first flight following the restart will be operated by Loganair on behalf of BA CityFlyer from the Isle of Man and is due to land shortly after 6pm.

Initial routes will mainly be restricted to those within the UK and Ireland, with services to Edinburgh, Glasgow and Dublin expected to return next month.

New routes to Teesside and Dundee will be launched on July 6 while flights to sunshine destinations such as Ibiza, Florence, Malaga and Palma are likely to resume in the coming weeks.

London City’s runway was closed to commercial and private flights on March 25 due to the collapse in demand and travel restrictions resulting from the coronavirus pandemic.

The airport has been available to Government agencies and the military during the crisis.

‘We do hope they (the UK Government) will be sensitive to the 250,000 Spaniards that are also living in the UK and would like to enter the UK without a quarantine.’

Yesterday, the Spanish airport authority said holidaymakers coming into Spain from Sunday will have to pass three health checks and there was no mention of any enforced quarantine for Brits.

The first control will be a document that the traveller must fill in with information on their location during their trip and whether or not they have had coronavirus.

The second and third will involve having their temperature taken at the arrival airport and a visual inspection. If the passenger fails one of the three checks, he or she will be seen by a doctor.

But without the Government setting up a so-called air corridor with Spain, anyone returning from a trip there would still have to quarantine for 14 days.

It is understood the UK’s quarantine restrictions will be reviewed on 29 June.

The topic of air bridges is now the hot topic of conversation, as thousands of Brits hope to get in some form of a summer holiday following months of lockdown.

Britain’s ‘air bridges’ plan is set to involve less than ten countries, giving tourists the ability to travel between them and the UK this summer with no mandatory 14-day quarantine.

A total of 12 countries – including Greece, Spain, Portugal and France – are being considered with officials examining both the risk of travellers bringing Covid-19 back and the popularity of the destination.

At the moment, any traveller arriving in the UK – whether from Britain or a tourist – must quarantine for 14 days and provide their phone number and an address for self-isolation.

The ‘air bridge’ rules would come into play on July 4 and will likely be announced on June 29.

But it will only go ahead if the chief medical officer provides advice on each nation and the Foreign Office lifts its non-essential travel ban to the countries in question.

Across Europe, Greece has already introduced mandatory Covid-19 testing for arrivals from countries deemed high-risk, such as the UK.

Anyone landing from these countries must also quarantine on arrival. 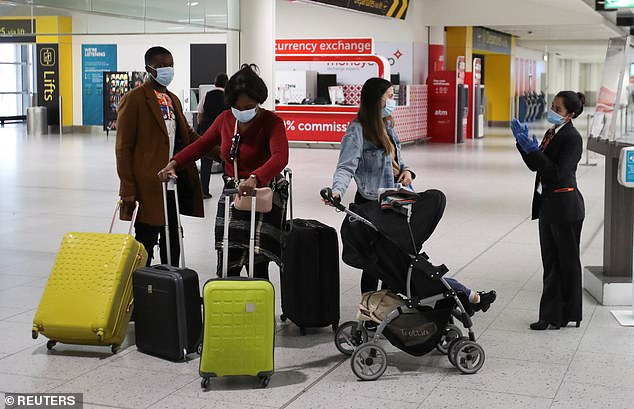 The UK’s ‘air bridges’ plan is set to involve less than ten countries, giving tourists the ability to travel between this summer with no mandatory 14-day quarantine. Pictured: Gatwick Airport

However, these tough measures only apply to those arriving from ‘higher risk’ airports.

Those considered ‘lower risk’ include Bristol, Southend and Edinburgh and arrivals from these are only be subject to random testing.

Any plans depend on reducing the risk of a second wave meaning quarantine could stay in place for the next few months.