By Amelia Wynne For Mailonline

A mass brawl involving up to 200 people broke out in front of horrified families at a beach in Exmouth yesterday.

Police were called to the beauty spot at Orcombe Point in Devon after receiving reports a ‘large scale altercation’ involving a crowd of sun-seekers.

Officers from all available local units of Devon and Cornwall Police rushed to the scene and broke up the fight shortly before 7pm.

A mother who witnessed the brawl said she was ‘lost for words’.

If you can see yourself in this video, do yourself a favour and take yourself home!! 😡 Pretty sure you’re all old enough to count and if you are, that’s way more than 6, let alone the trouble you’ve been causing all day with families and kids around who are actually trying to enjoy the beach sensibly…Irresponsible little children.

She told The Mirror: ‘It was absolutely shocking behaviour. I witnessed the fights between 5pm and 7.45pm, I am literally lost for words.

‘As we were leaving my son got knocked into while they were fighting in massive groups!

‘Would easily say 200 people plus it was as horrendous.’ 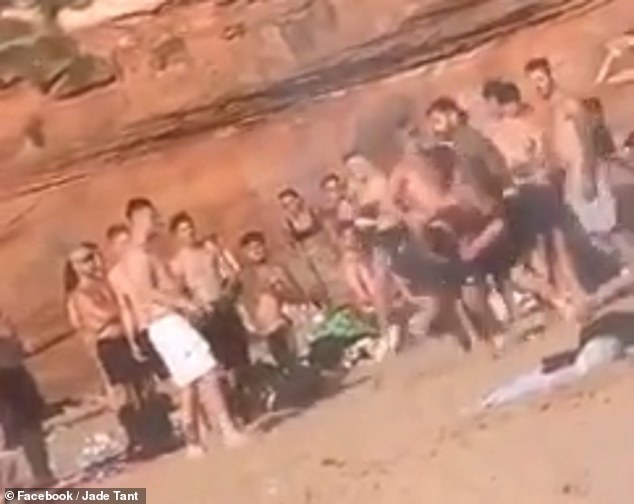 Another beach-goer said she felt forced to leave the beach due to the large numbers.

East Devon MP Simon Jupp said he was appalled by the incident and reminded people now is not the time for mass gatherings.

A dispersal notice has been put in place in the area until Friday morning to stop similar incidents occurring again.

One eyewitness told DevonLive that four police cars were heading towards the beach just after 8.30pm, with blue lights on. 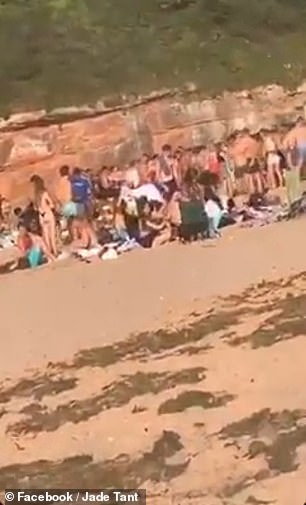 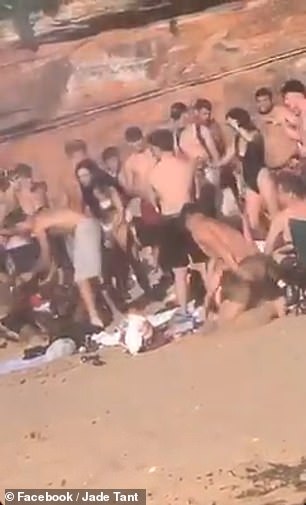 A Devon and Cornwall Police spokeswoman said: ‘It’s believed that there were a number of fights within this altercation and was further reported that there had been anti-social behaviour seen during the course of the afternoon.

‘A number of units attended the beach and sea front where a dispersal notice was put in place by police and will remain until Friday morning, in order to reduce the likelihood of recurring incidents.

‘A small number of people had to be dispersed by officers whilst the majority dispersed of their own accord.’

Yesterday, the beach at Orcombe Point was described as looking like a ‘festival’ as huge crowds of people soaked up the sun.

Police were also present at the scene earlier this afternoon speaking to teenagers who were in a large group, but it is not known if this is related to the reports of ‘fighting’.

Social distancing measures currently still stand at two-metres and you are only allowed to gather in groups of six, as long as you observe the rules.

It came as temperatures in the region soared yesterday, making it officially the hottest day of the year so far.