The war of words between the two heavyweights of the nationalist movement intensified yesterday as Alex Salmond launched a blistering attack on Nicola Sturgeon‘s independence strategy.

The Alba Party leader claimed the First Minister’s suggestion that a referendum will happen in 2023 or later depending on the battle against Covid has caused ‘consternation’ in the pro-independence movement.

He also accused her of a ‘lack of urgency’ in the bid to tear Scotland out of the UK.

Miss Sturgeon used a newspaper interview to launch new attacks on Mr Salmond and claim that Boris Johnson will grant a referendum if there is a pro-independence majority. 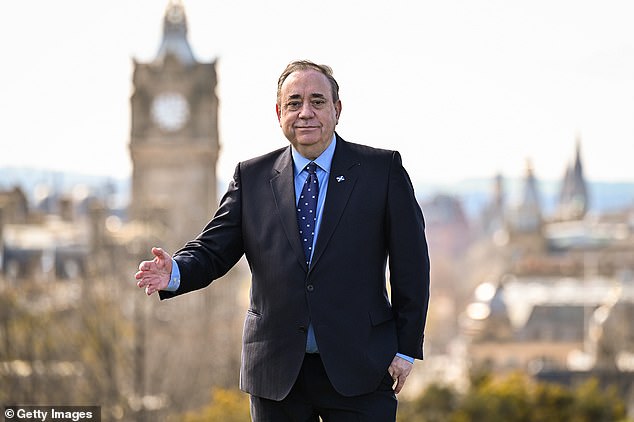 Middle-class families are facing the threat of more tax hikes under plans to overhaul council charges.

The IPPR Left-wing think-tank yesterday called for the ‘out-of-date’ council tax to be scrapped and replaced with an alternative based on property valuations. If implemented, it would result in bills soaring for those in homes within bands F, G and H.

Responding to the report, an SNP spokesman said: ‘Reforming council tax and local government is one of the issues we will look at… if re-elected.’ The IPPR said council tax is out of date because it is based on home values that are 30 years old.

Critics said the latest exchanges show nationalists will be ‘fighting like ferrets in a sack’ in the next term of parliament.

Calls also grew for a full judge-led inquiry into the Scottish Government’s handling of harassment complaints after Miss Sturgeon admitted the various probes had not properly got to the bottom of the issue.

Scottish Conservative candidate Annie Wells said: ‘Scotland deserves better than nationalists fighting like ferrets in a sack over who is trying to break up our United Kingdom quicker.

‘At a time when we should all be focused on our post-Covid recovery, nationalists are only obsessed with their fresh drive for another independence referendum and trying to settle personal grievances.’

Mr Salmond’s comments are the most direct attack on Miss Sturgeon’s strategy since he launched his rival pro-independence party last month.

He was responding to Miss Sturgeon telling journalists last week that her ‘preference’ is to hold a referendum in the first half of the next term of parliament, a period that runs until the end of 2023, but that whether that will ‘definitely happen’ depends on the fight against coronavirus.

In a statement issued yesterday, Mr Salmond said Miss Sturgeon’s comments about an independence referendum in 2023 or later had caused ‘total consternation’ in the nationalist movement.

He said: ‘It seems to be that Scotland will not ‘be free until after 2023′ – more seriously, it seems to indicate a lack of urgency in bringing the independence question to a decision.’ 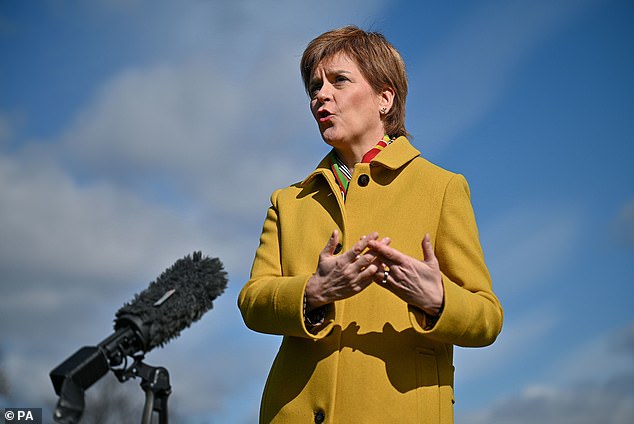 Mr Salmond also claimed the Prime Minister would find it ‘substantially more difficult’ if there is a pro-independence ‘super-majority’ in Holyrood.

Risk of court challenge in battle over two Bills

Nicola Sturgeon described the prospect of a court challenge as ‘morally repugnant’.

But a UK Government source said: ‘This delay to the legislation could easily have been avoided. Sadly, it appears the Scottish Government is more interested in stirring a constitutional row.’

In an interview with the Guardian, Miss Sturgeon claimed Mr Johnson would not ‘stand in the way’ of a referendum if her party wins the election.

She hit out at Mr Salmond’s tactics – which include support for street protests – saying they will put off voters, and again questioned whether he should be able to return to public office. Scottish Liberal Democrat campaign chairman Alistair Carmichael said: ‘Nicola Sturgeon and Alex Salmond don’t care about your job, your parent’s operation or your child’s schooling.

‘Scotland deserves better than a nationalist movement that wants to spend the next five years arguing about the timeline for independence.’

Meanwhile, calls grew yesterday for a judge-led inquiry into the handling of complaints about Mr Salmond after Miss Sturgeon admitted various probes had not got to the bottom of the issue. Women who complained about Mr Salmond told MSPs a ‘blind eye’ was turned to his behaviour before they made their complaints.

Asked if the inquiry had discovered exactly what was going on in government prior to 2017, Miss Sturgeon told the Guardian: ‘Have any of the inquiries properly done that? Probably not.’ Murdo Fraser, one of the members of the Holyrood inquiry, said: ‘At every turn during this inquiry, it was the SNP Government who obstructed our work and attempted to keep vital evidence secret from us.’

He insisted ‘a judge-led inquiry is now necessary’.

Few things are more coveted at election time than a thumbs- up from stars of stage and screen. Mrs Thatcher secured the pivotal backing of Bob Monkhouse and Jimmy Tarbuck.

Alex Salmond has trumped them all with the ultimate celebrity endorsement: Robert the Bruce. Having been dead for almost 700 years is no barrier to supporting Alba. If anything, it probably helps.

Salmond’s last drain-circling attempt to cling to relevance released a video ahead of its manifesto launch yesterday in which the former King of Scots rather surprisingly backed Salmond’s list vote campaign. William Wallace is understood to support tactical voting in constituencies, while John Comyn remains undecided.

The narration was provided by actor Angus Macfadyen, who played Bruce in Braveheart and ‘Operating Assistant (uncredited)’ in the 1989 horror classic Body Organ Replacement Network.

Macfadyen, an Asda Price Gerard Butler, has portrayed the Mormaer of Carrick in a number of projects and there is a chance he has come to believe he actually is the 14th century monarch.

Over drone shots of flag-waving throngs, Angus the Bruce supplied a summary of Bannockburn. Given Alba’s target voters never left 1314, this seemed superfluous. ‘People power by the small folk of Scotland,’ he intoned, ‘was the straw which broke the spine of English superiority.

‘I should know,’ he declared. ‘I was there. I am the Bruce.’ I am the walrus, goo goo g’joob. Separatists demand to be recognised as ‘civic nationalists’ but all their heroes are medieval aristos best known for killing lots of English people.

Scottish nationalism is like one long episode of Fawlty Towers except the wars they can’t stop mentioning all took place before the invention of the printing press.

The tone of the production fell somewhere between McGlashan and McUkip, a pitch to the sort of Scot who gets their history from ‘Wha’s Like Us?’ tea towels and believes in welcoming folk from all countries that don’t begin in ‘Eng’, end in ‘land’ and have our whisky revenue hidden in their treasury. ‘Alba will unite the Clans,’ Angus Braveheart foretold. I assume it was being spelled with a ‘C’.

Later in the afternoon, Salmond posed for photographers on Calton Hill holding a giant ‘ALBA’ placard beside one of his candidates, who brandished a saltire twice his size. In the background, a random bloke stood on the National Monument, peering at this scene, perhaps wondering whether the figures in the distance were very small or their patriotism just really, really big.

Scotland’s Folly was a fitting backdrop for the latest wheeze to bring about independence. A hubristic endeavour left in ruins after the money ran out. Sounds about right.