Nicola Sturgeon‘s aim of a four-day week in Scotland will cost the nation’s taxpayers £3billion a year, it was claimed today.

The First Minister yesterday unveiled plans for a £10million pilot scheme if the SNP administration at Holyrood is re-elected in May, which will examine the feasibility of shortening the working week.

It was among a raft of expensive public-spending promises she outlined which included free dental care at the same time as no income tax increase for five years.

But today the Scottish Tories suggested that the cost of implementing a full four-day week across the whole public sector could hit £3billion annually.

They said that the entire of the SNP election manifesto unveiled yesterday would require the Scots economy to increase by £95billion a year – doubling in size – to implement.

‘This is the SNP’s White Paper for independence all over again. Nicola Sturgeon is trying to deceive voters into supporting another referendum,’ he said.

‘Her plans for independence relied on fantasy economics and this analysis shows that the SNP’s 2021 manifesto is just as misleading.

‘It’s clear the SNP manifesto is not remotely credible. It’s a fantasy wish list in pursuit of another referendum.’ 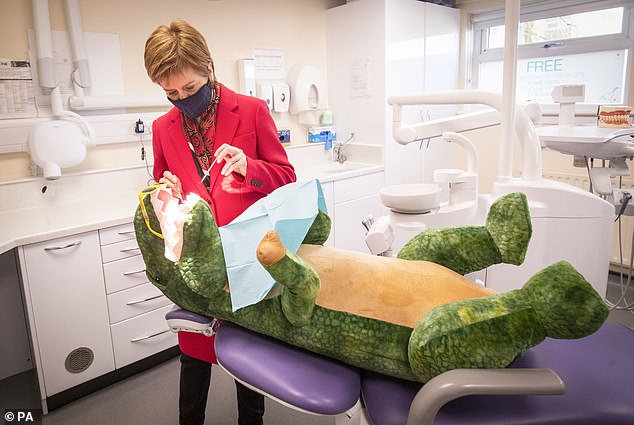 The First Minister yesterday unveiled plans for a £10million pilot scheme if the SNP is re-lected in May, which will examine the feasibility of shortening the working week. 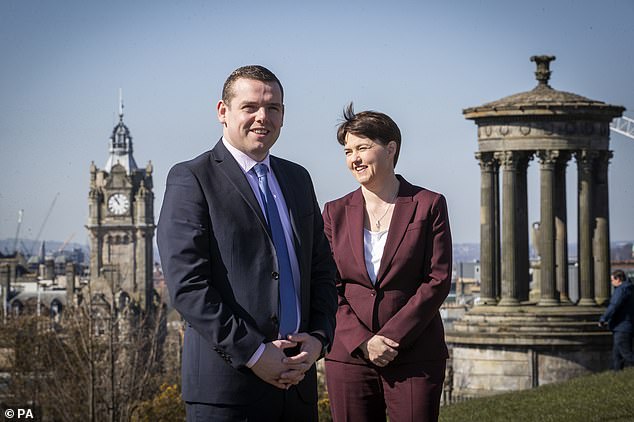 Party leader Douglas Ross accused the First Minister of unveiling a ‘fantasy wishlist’ that stood no chance of begin implemented.

They argue that because this cost would in future cover four days per week, an additional 25 per cent would be needed to cover a fifth day in services that have to be staffed five days a week, including the NHS and the Scottish Prison Service.

This figure is £2.073 billion, plus an additional £942million to cover the same time in other services that are costed separately: schools, Police Scotland, Scottish Fire and Rescue and the Scottish Courts and Tribunal Service.

Scots were last night told to brace themselves for tax rises or spending cuts if the manifesto plans for tens of billions of pounds of spending increases was brought in.

The First Minister, who is widely expected to win a majority at the Holyrood elections in May, pledged to give Scots free trips to the dentist, plough billions more into the NHS and infrastructure and set up pilot schemes for a four-day working week and a universal basic income.

But the colossal cost of her plans if she takes the SNP into its third decade of power in Scotland raised serious questions over how it will all be paid for.

At the same time as pledging to open the public sector cash taps wide open she also vowed to freeze income tax rates and bands for five years if re-elected.

A respected think tank suggested that cuts or increased levies would be needed elsewhere to underwrite the programe in the wake of the coronavirus pandemic.

David Phillips, associate director at the Institute for Fiscal Studies (IFS), said: “The SNP’s manifesto continues with a trend of greater universality in public service provision – providing services free to everyone, rather than using means-testing to focus support on those with the lowest incomes.

‘The plans set out would also mean substantial gains for certain groups of households: many families with, particularly younger, children; households that would benefit from the exemption of all 18 to 21 year-olds from council tax; and those paying for home care, for example.

‘Paying for all of these pledges in what could be a tight funding environment over the next few years will require tricky trade-offs though: tax rises or spending cuts in at least some other areas.

‘The tougher fiscal situation an independent Scotland would face in at least its first few years would make the challenge of delivering these commitments even harder.’

The IFS also poured cold water on the SNP’s pledge to spend billions more on the NHS in Scotland, suggesting it could amount to lower spending that that planned for England.

‘The SNP commits to increasing front-line health spending by at least 20 per cent (or £2.5 billion) over the next parliament, even if the Barnett consequentials resulting from increases in spending on the English NHS are less than this,’ it noted.

‘That would represent a real-terms increase of around 2.1 per cent per year, over and above expected inflation – similar to the average annual real-terms growth in Scottish health spending over the past five years, but slower than the 3.4 per cent per year promised to NHS England in its most recent long-term funding plan, and slower than what previous analysis – produced prior to the COVID-19 pandemic, which will likely add to medium-term healthcare pressures – has suggested might be needed to keep pace with demographic and cost pressures.’

The SNP made a similar pledge to freeze income tax at the 2016 election, only to U-turn and increase it by a penny the following year.